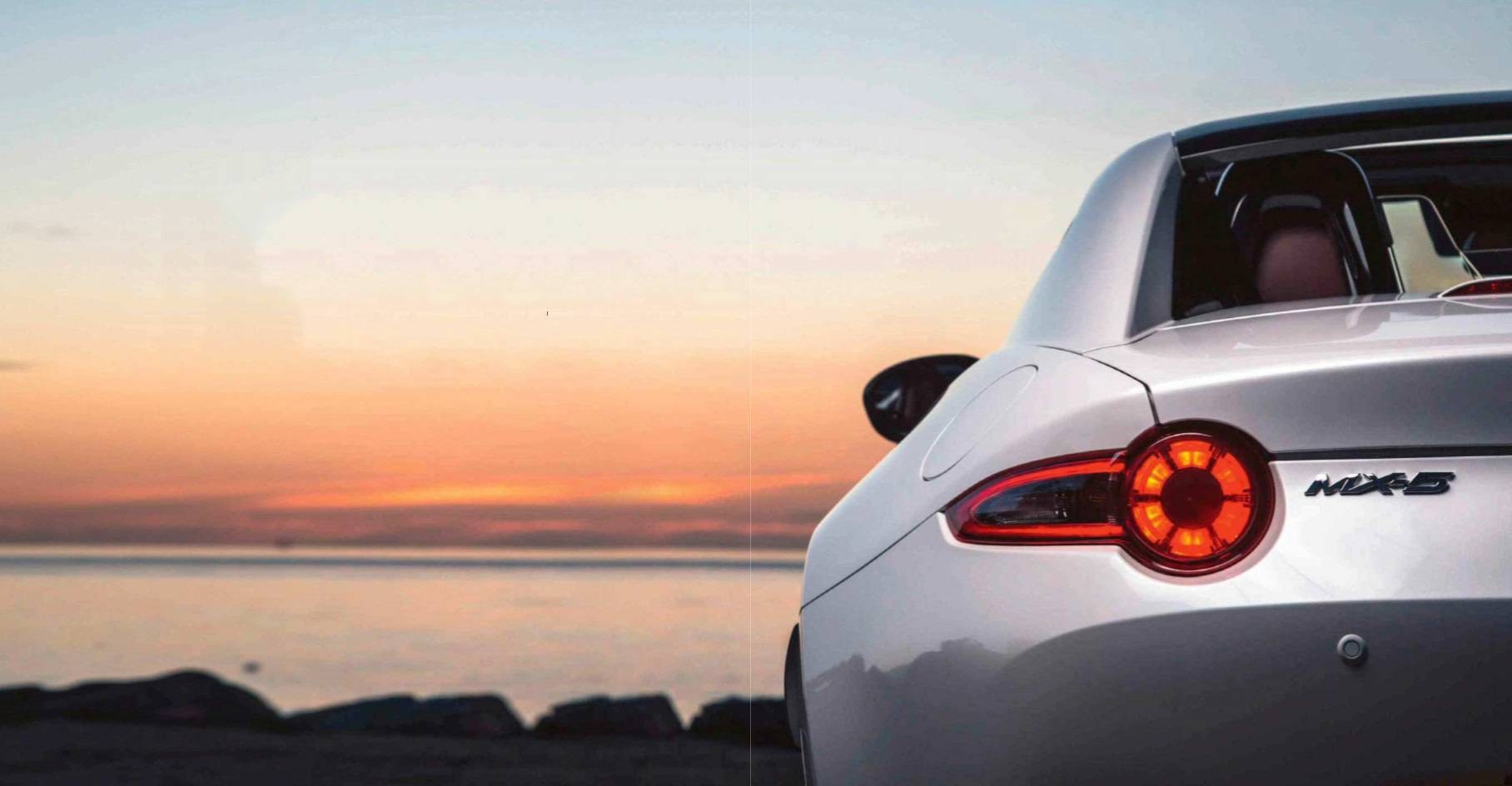 Mazda’s investing in atmo power with an uprated 7500rpm 2.0-litre 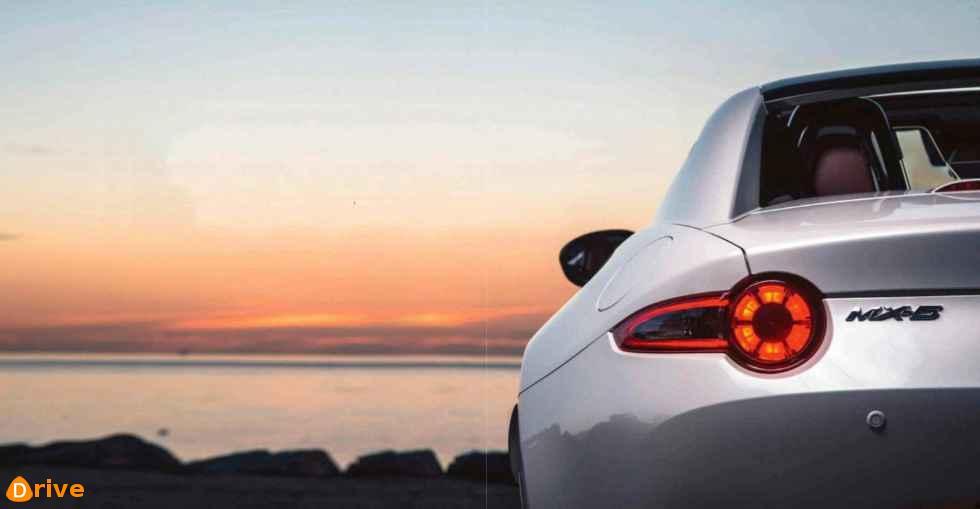 ALTHOUGH MAZDA’S headquarters in Hiroshima sit far away from the summit of Japan’s Mount Fuji, that hasn’t stopped it from reaching for the same heights with its new MX-5. The latest generation has always forced buyers to make a choice. Either pick the 1.5-litre variant for cloud-tickling revs or opt into the 2.0-litre for genuine hair-ruffling speeds. Neither provided both. This made business sense, in that each car oozed itsownappeal.ButMazda hasnow blown theirpeaceful co-existence to bits and sent the 2.0-litre engine soaring.

The news is hard to believe for the fact, initially, engineers lavished their love on the 1.5-litre engine. Being lighter, and from a Mazda2, it suited the‘gram strategy’ they obsessed over during this car’s gestation. In their eyes it was the more pure pick. But with criticism hurled at the larger engine for being less involving, and engineers doggedly refining the car in every way possible, their attention has finally locked on to the ‘big block’ for this year’s model update. Their aim? Inject the 2.0-litre with its smaller brother’s charisma. The plan? Spin it to the same 7500rpm rev limit.

And the result? On paper, it’s the most powerful factory atmo MX-5 yet. It wields 135kW and 205Nm, or 17kW and 5Nm more than before, from two litres. But this mission was never about packing more punch.We figure Mazda could have easily lowered a bigger 2.5-litre into the MX-5’s schnoz. After all, some owners have crammedV8s in there. In reality this project was about making the 2.0-litre, created to appease grunt-loving Americans, zing to the same highs as the 1.5-litre with all its smoothness and theatre. To do so, the engine’s 1998cc scores some hot-rod style upgrades.

Like, on the outside, the engine breathes through larger intake ports, runners, and throttle body. Together they feed 28 per cent more air onto redesigned pistons. In the cylinder, higher pressure injectors shower the charge, that then ignites and escapes out bigger exhaust valves, that open for longer and further, into larger exhaust pipes. Thenexttaskwastoraiseitsrevceilingto7500rpmwithoutit shaking itself apart. Its 13.0:1 compression ratio is unchanged. Engineers installed stiffer valve springs instead, shaved the piston domes of 27 grams, and redesigned the con-rods to drop 41 grams.

Its bore and stroke measurements stay undersquare and the crankshaft gets rebalanced. The flywheel goes from single-mass to dual-mass, while the rear muffler is re-tuned to contain the engine’s new buzz. The extensive tuning hasn’t awakened much of a roar when you start the car. Instead of exploding with noise and settling into a lumpy idle, a scenario the extent of tuning almost tricks you into believing might happen, the new MX-5 2.0-litre sounds much like before. The starter motor whizzes a couple of times before the four cylinder wakes with an uninspiring flare of revs.

Stabbing the throttle in neutral hears the exhaust bark with slightly less  snarl, and resonance, than before, though the real differences emerge on the way to the rev dial’s other end.  Plunge the throttle and the sounds start as a whir, multiplying into a buzz, and then fattening into a blare in its upper ranges. Mazda says peak torque arrives at 4000rpm, but the starting blocks for the engine’s manic rush to its 7000rpm power peak is about a grand later than that. 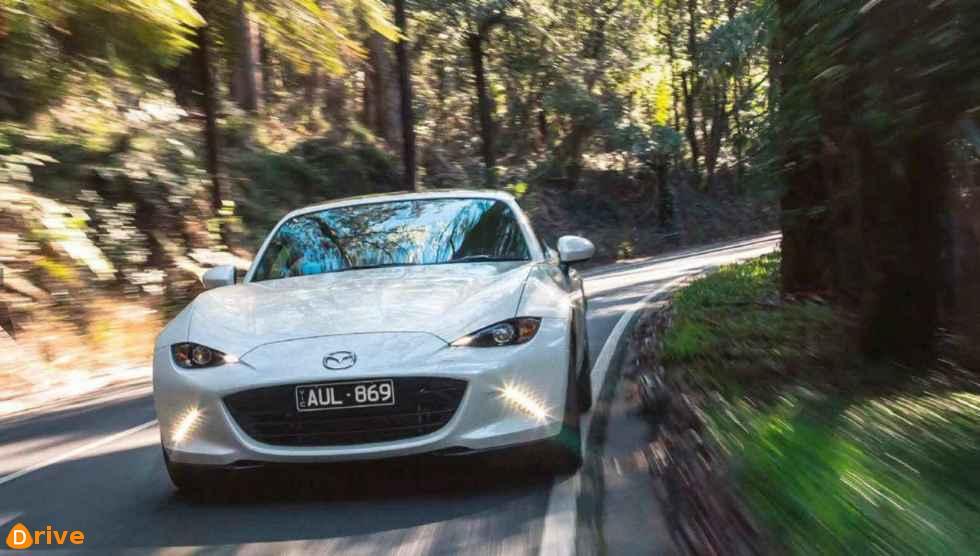 As its crank reaches these higher rotating speeds the sound truly departs from the old one, developing a more full-bodied roar as it hones in on its 7500rpm redline. Here, the percussion of its valves, cam lobes, and pistons becomes hard-edged and truly musical.  All this band practice has beefed the MX-5’s muscles. The car’s torque peak appears 600rpm earlier while its max power arrives 1000rpm higher. And since Mazda has nailed its direct injection, there’s no torque hole or delay in response, but a flat climb towards that power peak.

The urge doesn’t fall off beyond that, either, making that last 500rpm worth more than just sweet sound, as nailing the upshift just before its 7500rpm soft limiter is involving and delivers a rush of satisfaction. The carried over six-speed manual transmission still slots with the well-oiled precision of a sportscar twice the MX-5’s price. Its clutch, too, is easy to judge and modulate. Also, the engine spins with a pinch more keenness and significantly less coarseness or vibration, but you’ll need the finely tuned buttocks of someone like Fernando Alonso to feel the differences in speed.

Luckily, our data equipment reveals the effect of its extra power. For the sake of science, we tested both the hardtop RF and soft top 2.0-litre MX-5 for this article, but only had the photography of the former available at the time of print. However, we figured you’d want to read about both, so we’re going to start with the quicker car.  Being lighter, the new soft-top will shoot past B-doubles two tenths quicker than the old car. In fact, 80-120km/h drops from our previous test’s 4.8sec to 4.57sec. The extra grunt is felt from a stand-still, as well.

Compared to our best previously recorded times, the soft-top is 0.15 seconds quicker to 100km/h, 0.14sec faster across 400m, and carries 2.1km/h more down the chute. Both bodystyles thrive off wheelspin from a launch to produce their figures. There’s a hard 5500rpm limit in neutral, and a clandestine traction control system waiting to catch the revs if you use it to drop the clutch. Step off the third pedal somewhere around 5000rpm instead and the MX-5 will get under the 7.0sec 0-100km/h barrier easily as the rear tyres scamper along with axle tramp.

It’s the same case for the RF, but since we don’t have any comparative times to detail how much faster it is, we’d predict a similar gain in speed considering it’s gained 25kg when the softie is 23kg heavier. Yes, the new MX-5 is heavier. Surely engineers winced when fitting extra sound deadening in 2018, then a radar system, reverse camera, and telescopic steering shaft in 2019. But that last upgrade is welcomed like water in a desert. The steering wheel can now reach 42mm closer to you than before.

It gives you more control during hard driving, which is what lures tall drivers into the MX-5’s cramped cabin in the first place. Both cars fidget over small road imperfections and shake their scuttles every so often. The secondary ride’s better, but the soft-top goes one step further in dynamic achievement. With a spects of the RF’s rear suspension setup transferred to its aft axle in 2018, the new settings unlock more rear compliance, and stability, especially under acceleration, with less roll oversteer.

However, because its front-end remains unchanged, its nose stays pinned to the tarmac, and that only improves its feeling of agility. The RF handles with the same fundamental balance, but it bobs more over crests and lumps, occasionally resulting in a secondary movement. Yes, the softer tune will suit those who spend considerably more time commuting and touring, but its higher centre of gravity and less interested front-end dismiss it as a serious corner carver. It’s not like its cabin is soundrecording studio levels of quiet, either, so the added protection against elements is its other draw card against the soft-top. 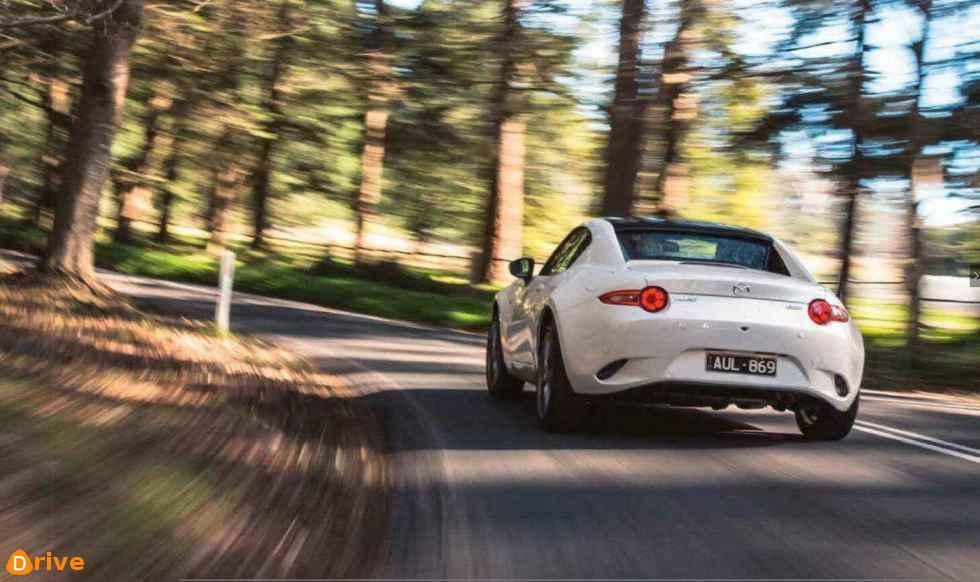 One of the few ways to spot one of these 2019 babies from behind is contained within the rear bumper, where you’ll find the rearview camera

The extra 500rpm means both cars hold second gear into uphill right-angle corners, and pull through third gear more convincingly, but the fact our test’s consumption figures reveal the soft-top drank half a litre more over 100km shows just how muchmorewe enjoyed using it during testing. The extra sound deadening, too, is welcome, and pushes noise levels down for trips into the country. Unless you want softer, more exploitable suspension, or smaller fuel bills, we can’t see why you’d look past a new 2.0litre Mazda MX-5 for the downsized unit.

Pricing for the 2019 car wasn’t available to us at the time of print, but we’re going to say whatever Mazda is asking, expect to see pre-2019s and more 1.5-litres up for sale. Not only have engineers extracted a whole lot more character from the 2.0-litre, the other small changes amount to a much improved car. It might not scream to the heights former atmo legends like the Honda S2000 did.

Frankly, few cars will replicate its 9000rpm redline – that’s rarefied air you’ll need to travel to Porsche’s GT cars for. And while the Mazda’s new 2.0-litre might seem like only a glimpse into such theatre, it’s an experience that goes a long way to being close to as thrilling. You’ll need to climb 3776 metres above sea level to reach the top of Mount Fuji. But with redlines plummeting across the market in both cheap and expensive cars, the MX-5 2.0-litre’s 7500rpm is a peak easier, and now more enjoyable, to visit.