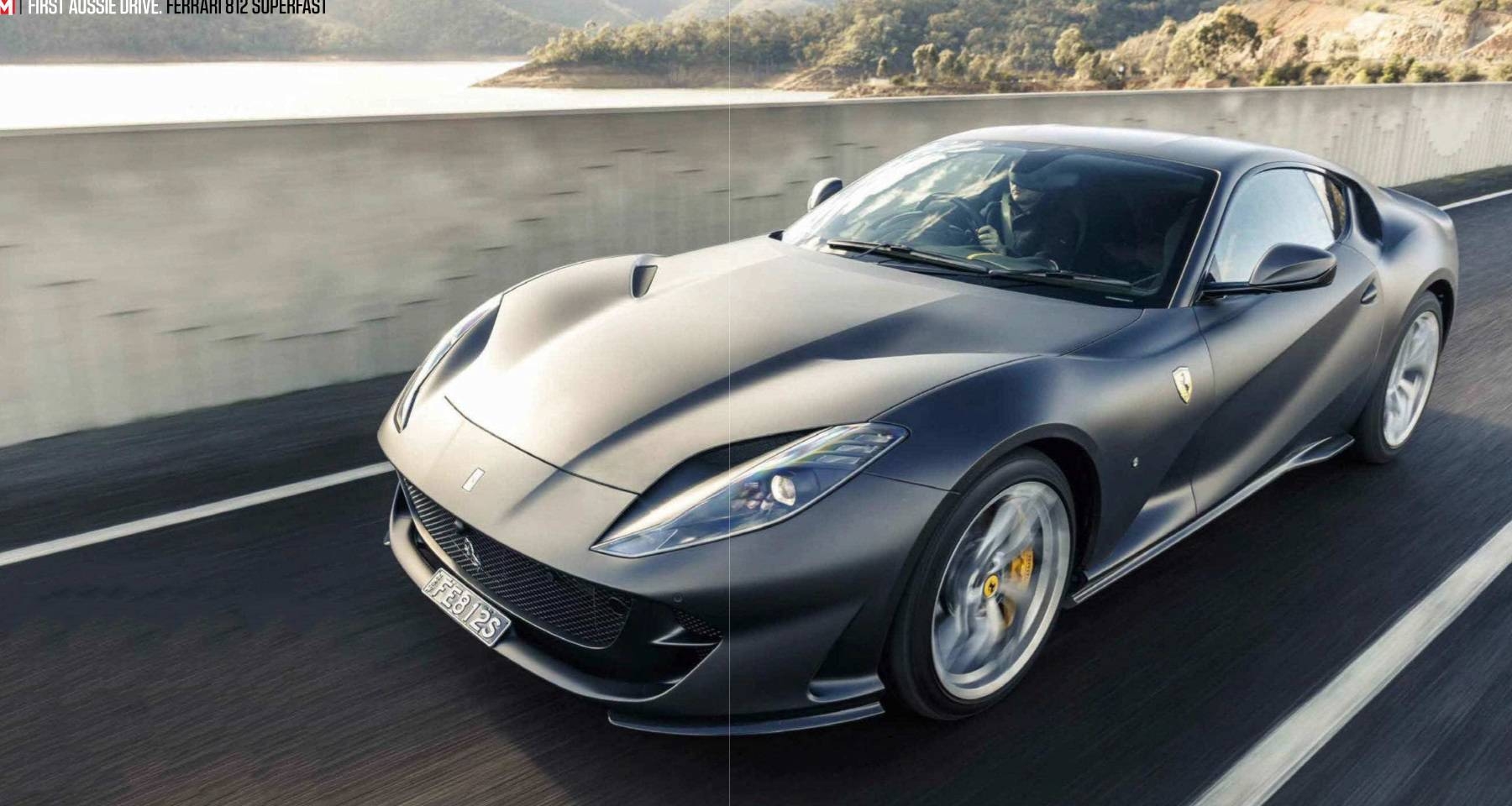 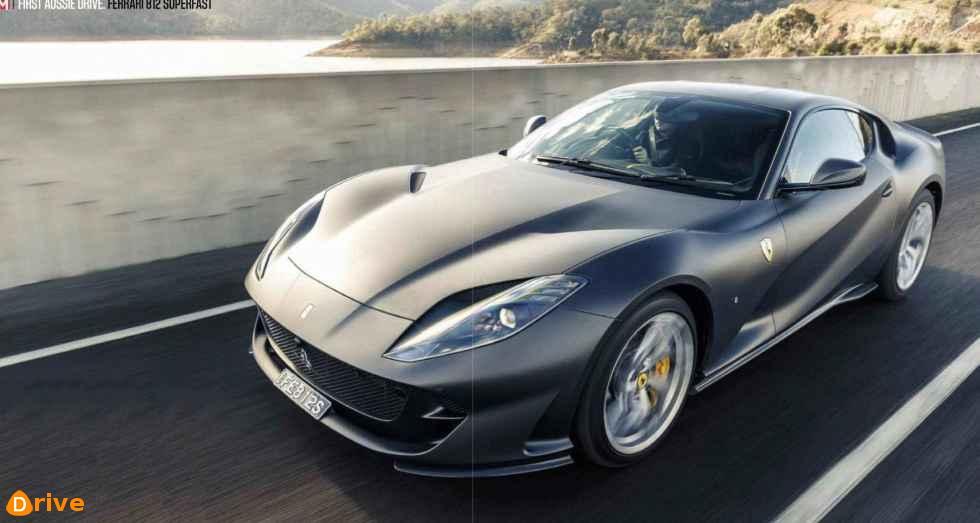 FERRARI IS not usually short of inspiration when it comes to naming new models. It’s used places (Modena, California), people (Dino, Enzo), engine displacement (355, 488 et al) or even everyday nouns that sound impossibly exotic in Italian – ‘Red head’isn’tquitease vocativeas ‘Testarossa’. When it comes to it slatest V12 Grand Tourer, it seems Maranello either ran out of ideas or has adopted a new policy of stating the obvious –hencethe812Superfast.

Jokes aside, this being Ferrari, there is of course a historical precedent. ‘Superfast’ first appeared on a 410 Superamerica, built for the 1956 Paris Auto Show. A further three styling concepts were shown based on a 400 Superamerica before the badge reached production on the 1964 Ferrari 500. A two-door GT powered by a 294kW 5.0-litre V12, the 500 Superfast was claimed to hit 280km/h – only 36 were produced. In layman’s terms, the 812 is a mid-life update of the F12. In reality, it’s a complete re-engineering, incorporating lessons learned from the limited edition F12tdf. The result is spectacular, catapulting the 812 up MOTOR ’s ‘Best Cars’ list.

How far up is unclear and also largely irrelevant; we’re living in a golden era for fast cars.The oil may be running out, but we’re certainly making effective use of what’s left. The Superfast begins to burrow its way into your affections before it’s moved a metre. There arguably hasn’t been a truly beautiful Ferrari GT since the 550 Maranello; even that had an unsightly nostril in its bonnet, which gives the nod to the 456 and that’s 25 years old.

The F12 was and is incredibly striking with massive presence, but aerodynamics dictated sharp edges and creases everywhere, like the bodywork had eroded from being left in the wind tunnel too long. A generation on, Ferrari hasmanaged to marry the demands of art and air. The 812 is a more organic shape, yet generates 10 per cent more downforce than its predecessor. Active aero helps, electrically operated flaps underneath the front bumper and rear diffuser activating at 180km/h to increase downforce or shed drag as required.

Plenty of creases and curves remain, accentuated by our test car’s $52,937 Grigio Opaco (yes $53K) paintwork. Initially a disappointment, particularly in comparison to the glamour of Ferrari Melbourne’s bright red demonstrator, the matte grey’s appeal grows to the point that it might be the 812 colour of choice. Then again, dark blue is nice, as is yellow, or black… The closer you look the more details there are to absorb; photographer Ellen frets constantly for two days, anxious to capture every angle, but there are only so many photos allowed before the driving must commence.

Unlike some mid-engined competitors, you don’t need to be an Olympic medallist in gymnastics to enter the 812 gracefully. The standard seats are comfortable and electrically adjustable, making it easy to find the ideal driving position. Ellen’s gear is swallowed by the boot with relative ease and there’s an extra shelf behind the seats for coats or bags. The steering wheel is festooned with buttons and switches; intimidating at first, it soon becomes second nature to find everyday controls by feel. 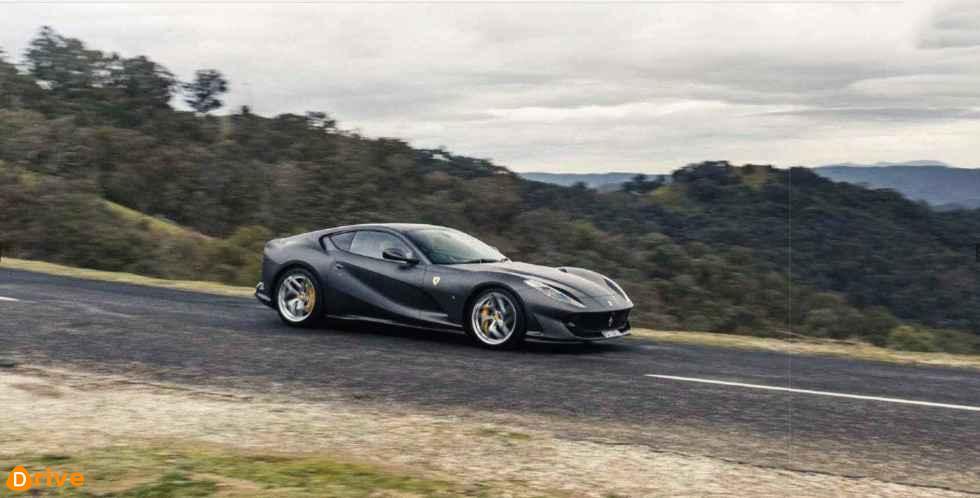 Less intuitive are the dual controls housed either side of the steering column that operate the twin digital screens – one side trip data, the other infotainment. It’s all a bit fiddly and while Ferrari continues to make strides forward in interior quality and presentation, there are still a few steps to take.The leather, carbon and Alcantara are lovely, some of the plastic switchgear and trim not so much. But who cares?You won’t. Not from the moment you press and hold the bright red starter button on the steering wheel.

A theatrical whirr is quickly followed by a massive flare of revs as the 6.5-litre V12 wakes from its slumber, the exhaust valves staying open long enough to ensure every neighbour has woken from theirs. A click of the right-hand paddle engages drive, another button lifts the nose clear of the pavement and you’re away. Ferrarineverwantstohearitscarsdescribedasunremarkable, but that’s what the 812 is like to drive every day. The engine is quiet, the dual-clutch gearbox shifts unobtrusively and engages smoothly from standstill.

The steering is light and the ride is acceptable before you press the ‘Bumpy Road’ button, improving to commendable afterwards. The 812’s steering doesn’t chase bumps and cambers in the road to the same degreeastheF12’s,either.Thetwo-hourdrivefromMelbourne to Eildon is completed in peace, comfort and even with reasonable economy. Only when you want to pass the car in front do you remember almost 600kW lurk under the bonnet. Overtakes are completed very swiftly in a Superfast. We visit Eildon for the scenery, but hang around for the roads.

Virtually every sort of surface, corner, bump and gradient can be found on the many stretches of tarmac surrounding the immense body of water that is Lake Eildon. Immense is an equally apt adjective to use when discussing the812’sengine.If ear we’ve become so accustome to reading about 673kW McLaren P1s, 1000kW Koenigseggs and 1103kW Bugatti Chirons that the prospect of a 588kW/718Nm V12 Ferrari doesn’t carry the same weight it once did.

To provide some context, the spectacularly quick Audi RS4 Avant manages 185kW/tonne, the mindblowing Porsche 911 Turbo S 259kW/ tonne – the 812 Superfast produces 361kW/tonne. Ferrari says the 2.9sec 0-100km/h claim is the limit of what’s possible with rear-wheel drive and the 812’s 7.9sec 0-200km/h claim is more indicative of its pace. Probably not coincidentally, that’s exactly the same time McLaren claims for the 720S. The two cars provide a fascinating comparison, for they illustrate the difference between forced induction and naturally aspirated power.

The McLaren’s turbocharged torque feels to give it a slight edge in outright acceleration, but it can’t match the insane ferocity of the Ferrari’s atmosphericV12. Opportunities to even reach full throttle are rare, as on most roads you’ll have reached another corner by the time you do, not to mention waving speed limits goodbye. Ferrari has shortened the gearing by 6.0 per cent compared to the F12, but the lower ratios are still very tall; in something like a 2018 Mustang this limits your cog-swapping opportunities, but the 812 devours its initial gears so quickly that the upshift paddle has barely returned to its stay before another pull is needed.

At maximum attack the gearbox itself is flawless; Ferrari claims upshifts are 30 per cent quicker and downshifts 40 per cent, but they were already so quick in the F12 that I might as well claim I can blink 30 per cent quicker than you. A neat party trick is the ability to hold the left paddle and have the sevenspeed dual-clutch drop each ratio successively as soon as it’s able, each change producing a noise that wouldn’t be out of place at the end of Le Man’s Mulsanne Straight. 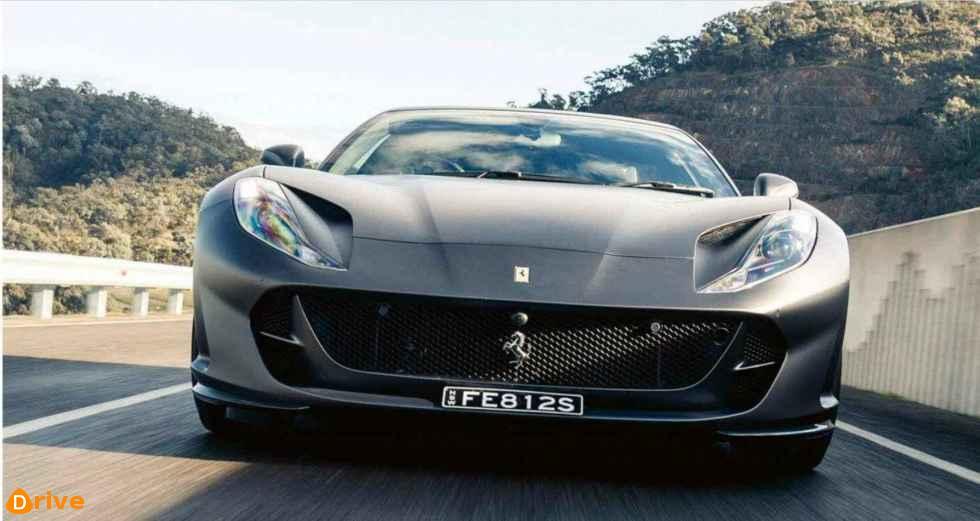 I was critical of the 720S’s coarse, industrial soundtrack (May 2018) and the 812 illustrates why; full throttle provides a rich sound that morphs from a low-rpm growl to a midrange bark to a furious mechanical scream as the 8900rpm rev limit approaches, along with acceleration of increasingly terrifying intensity. At 3500rpm the 812 is already producing more torque than a BMW M4 can muster in total, yet it goes truly berserk beyond 6000rpm. If the giant 315/35 Pirelli P Zeros aren’t warm (or are too warm) they’ll give up in first and second in the dry, or the first four gears in the wet.

That might sound intimidating and it is – you have to respect this much power – but it’s not at all scary. In fact, the 812 is one o f the friendliest cars at the limit I’ve ever driven. It incorporates a lot of technology introduced in the F12tdf, primarily ‘Passo Corto Virtuale’, Ferrari-speak for all-wheel steering, used to counteract the dynamic instability introduced by using wider 275/35 front tyres. It works brilliantly. The only clue the rears are actively involved is just how little lock is required to negotiate a given corner.

With such wide front rubber, understeer simply doesn’t exist on the road; driving an 812 quickly is all about oversteer management. Traction is incredibly strong, and the linear nature of the naturally aspirated power delivery makes feeding the throttle in progressively no chore. However, equally, there is so much power on tap that you can break the rear wheels free at will. If the manettino – the steering-wheel mounted drive mode selector – is set to Sport or Race, this will be managed electronically by the stability control. It’s not overly intrusive, but a glance at the dash reveals it’s almost constantly active.

One click further activates Side Slip Control. SSC is basically a Sports ESP setting, but with the steering now electrically assisted (the first Ferrari to use EPAS) it has control over every facet of the car, constantly adjusting the differential, engine, steering and suspension to provide the optimal balance between grip and slip. It’s perfectly judged, lenient enough to let you leave two black lines on corner exit but always subtly mopping up any excesses caused by an over-eager right foot.

The Eildon-Jamieson road is 60km of driving nirvana and the 812 is utterly intoxicating – the speed, the balance, the adjustability but, more than anything else, the noise. Grip levels are incredible and the speed and accuracy with which changes of direction are completed makes the 1630kg kerb weight seem at least 150kg too much. Its greatest attribute, though, is despite the incredible amount of computer technology making countless decisions every metre of the journey, the driving experience feels completely natural and organic. Only the brakes mark themselves out as having room for improvement.

There’s nothing wrong with their power or stamina, but the initial pedal feel is quite soft; this doesn’t necessarily hurt confidence once you’re used to it, but it doesn’t help, either. The other attribute of note is the 812 demands to be driven very, very accurately. Inputs are answered immediately and when you have 588kW and extremely quick steering – just 1.8 turns lock-to-lock – those inputs better be the right ones. However, this only enhances the 812’s charm. 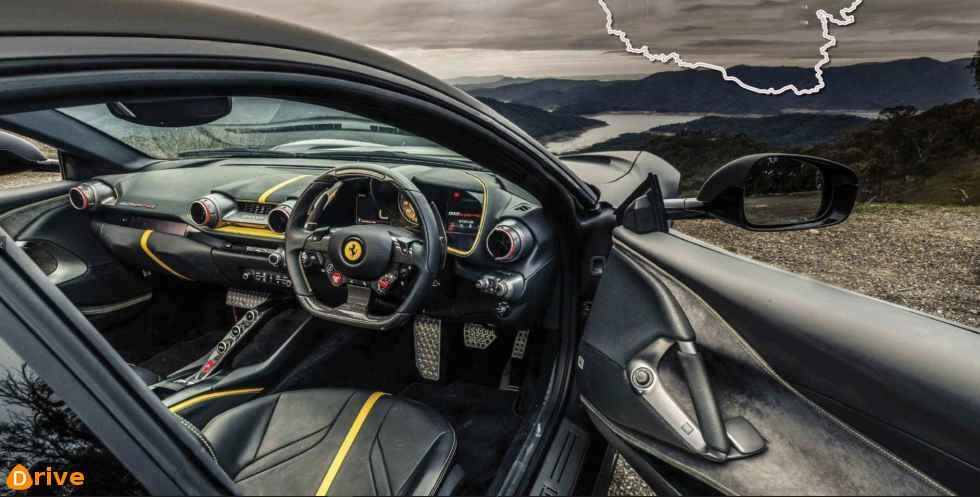 This is a supercar, it should test the driver and demand some level of excellence to deliver its best. In return, it will provide one of the world’s most exhilarating driving experiences. I’m still unsure whether it’s the ‘best’ car I’ve ever driven, but it’s almost certainly my favourite. To marry such savage speed – after more than 1000km the shock still didn’t fade – with such a beautifully exploitable chassis and stunning looks in a practical, relatively comfortable package makes the 812 a masterpiece.

Then there’s the noise, which makes me want to start a campaign to force non-enthusiasts into electric cars, just so engines like this can live on. Superfast might be an accurate name, but it’s not the most appropriate – F***ing Awesome must have been taken.