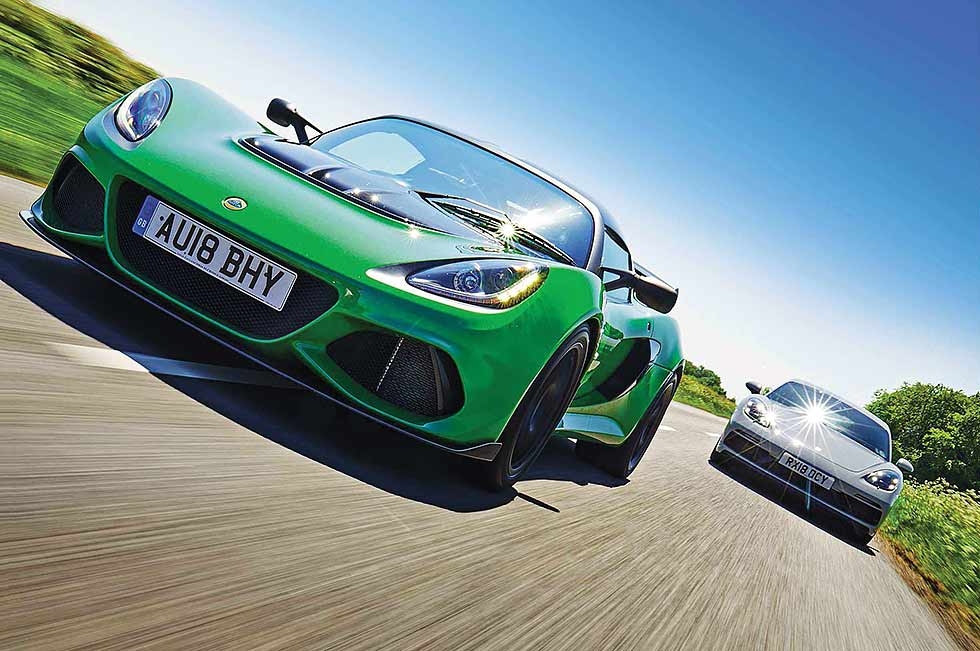 2019 Lotus Exige Sport 410 vs. 2019 Porsche Cayman GTS 982C. Mid-engined sports coupes don’t come more thrilling than Lotus’s Exige and Porsche’s Cayman, but which gets our vote? At last its the head-to-head we’ve been waiting for, as Porsche Cayman GTS squares up to Lotus Exige Sport 410. So, which of these killer coupes will land the knockout punch? Text by Stuart Gallagher. Photography by Matt Howell.

Ignore the specs sheets for the moment, specifically the prices, because when it comes to mid-engined, rear-drive sports coupes, Lotus’s Exige and Porsche’s Cayman have been like two boxers slinging insults at each other and puffing their chests out, but never actually ducking under the rope and getting in the ring.

There have been a few excuses from both sides as to why they’ve avoided a tear-up. Most have come from the Norfolk-based camp and have primarily centred around not being in peak condition at the same time as the Stuttgart swinger. Lotus’s contender has also fluctuated between classes by overdoing the training and being more on a par with the Cayman’s bigger-hitting 911 GT3 991.2 uncle. Oh, and for the last 36 months the Hethel firm has been devoid of a press fleet, making anything other than a handful of laps of its test track and Norfolk’s B-roads nigh-on impossible. Thankfully, that’s now changed for the better.

Not that Porsche has made it easy, either. When it kicked the naturally aspirated flat-six out of the Cayman, a huge part of the model’s character was also mislaid. Not being a 911 had allowed the Cayman to be layered with an individual character in contrast to the rear-engined car’s, because despite its iconic status the 911 has been making it harder to find those elements that have made it stand head and shoulders above the rest for so long. So since 2012, while the 911 has been in search of its mojo, the combination of a rev-happy, crisp-sounding and energetic naturally aspirated six and one of the sweetest manual gearboxes of a generation – possibly the sweetest – always resulted in the Cayman managing to do more than just creep into our affections. Not so now.

Replacing those glorious half-dozen cylinders with a turbocharged four hasn’t exactly KO’d the Porsche, but it’s no longer the firm favourite. It still does the numbers – in top-line GTS form it’s the most powerful series-production Cayman to date, with 360bhp and a haymaker 310lb ft punch enough to get you to 62mph in a claimed 4.6sec, with the double-whammy hit of a turbo-fuelled shove of torque pretty much wherever you need it. Although the intergalactic gearing still has you questioning what planet the transmission team was on when it came up with the ratios.

Engine aside (for the moment, because it cannot be ignored), the Cayman GTS remains a sports coupe that’s impossible to ignore. Balance, precision, poise, with not a single gram of fat in its dynamics. Even the electrically assisted steering has improved with age to match the chassis’ organic make-up.

Like a retired boxer trading on former glories and telling tales of how dominant they once were, the Exige Sport 410, despite its newfangled name and latest carbonfibre diet, could well be considered an old stager that’s picked one fight too many. But that would be to underestimate what’s been going on behind the scenes while chaos has seemingly reigned at Lotus since… well, for quite some time.

Trimmer than any previous Exige Sport model, more powerful too (the supercharged Toyota V6 may be essentially the same but its 410bhp was once reserved for the 991.2 911 GT3-rivalling Evora Sport 410), and with so much more street and track know-how, the Sport 410 sits plum in the Exige line-up and is the prime contender to the Cayman GTS.

Before they square up, it’s time to talk spec. The 410 isn’t cheap – £85,600 is an incredible sum for a car that would appear to have evolved at a much slower rate than its cost has increased. It is also, however, a finely detailed and tuned device dripping with the kind of desirable components that you expect of a low-volume manufacturer that, due to its modest production numbers and available resources, can be perfectly served by third-party experts. So, there’s a set of AP brakes, Team Dynamics wheels to the same spec as those made by the West Midlands company for McLaren, and Ohlins dampers. Then there are the benefits of 20 years of continuous development. The latest six-speed gearshift, the new approach to cabin design (less unnecessary detritus and better-quality core components) and the sort of attention to detail you get when a car is developed by people who consider their role a privilege rather than a job.

It’s still expensive though; for the same money you can build a very special Cayman GTS. One with ceramic brakes (£5177), lowered PASM Sports suspension (£168), the snug-fitting Sports Bucket Seats (£2315) and other goodies to boot. But while you can in theory buy a basic GTS for £59,866, to go toe-to-toe with the Lotus you’re going to need all the help you can get to get past the opening round.

It takes seconds for the GTS to remind you why them Cayman is held in such high regard. Its ergonomics, the natural control weights, the instinctive precision of every key procedure – they all make you want every car engineer from every car company to just sit in one to experience how it can be done. Sadly, a cloud drifts into the cabin when the four-pot is started. It truly is an awful-sounding collection of mechanical components. Many have likened it to an early VW Beetle engine running on its last millilitre of oil, but I’ve blown a Beetle engine into a million tiny pieces and seconds before she blew she still sounded better than this. Sorry Porsche.

Thankfully it’s only the note that fails to meet expectations, as every other facet of the GTS’s motor is hard to fault. By spreading its torque so wide across the rev band it masks its turbocharged delivery, in turn allowing you to drive it as if it were naturally aspirated. The way the throttle responds to the smallest of inputs is at odds with everything you know about forced-induction engines and it means that the GTS is still a huge thrill to drive.

Every road, each journey and all trips become an event. The rate of response of the steering, the precision of the damping and the absolute control it has over the body is a delicious reminder that in a world of autonomous cars there are still those who want to build cars for drivers. It’s a car you seek out the interesting road in, no matter how far out of your way it takes you.

PTV (Porsche Torque Vectoring) is standard on the GTS, and it makes an already exquisitely balanced car even more so. With the stability control switched off it’s one of the most naturally rewarding cars you can buy. Yes, allowing the standard locking diff to operate unhindered could add even more to the experience, but there are times when showboating can be outplayed by the sensation of hooking a series of apexes together with absolute control.

And those expensive brakes? Less unsprung mass is always welcome, but it’s the consistency they offer, the way they allow you to brake as deep as you wish, corner after corner, with the reassurance of next to no fade or unsettling judder, that goes a long way tojustifying their outlay. The Exige is facing a tough opponent.

A wide sill, bare floor, Vauxhall switchgear – for some, these will put this £80,000-plus Exige on its backside inside the first round. But stick with it – it’s worth it. The V6 isn’t exactly a choirmaster alongside the Porsche’s flat-four, but it instantly reminds you how more cylinders are a good thing. The throttle response isn’t as instant, but with less mass to move (1108kg v 1375kg) the Exige has no issues with forward momentum. And its gearshift is as sweet as that of the Porsche, with a great weight and action to its throw.

Where the Cayman impresses within the first 20 seconds of moving off, the Exige halves that, delivering a couple of quick blows to remind you you’re in for a workout. The unassisted steering is unexpectedly heavy in a world of EPAS and over servoed systems, but reach 30mph and it becomes the most beautiful rack you’ll experience in a modern car. Instantly you feel an integral component of the car, at the heart of the process.

After every back-to-back drive it’s clear the Exige is the purer, more involving and thrilling drive. In a straight line it has so much more performance and is so much more violent as the revs trouble the higher end of the tacho. And when you step out of the Cayman thinking driving perfection comes no better, the Exige delivers its sucker punch. It can carry so much more speed into, through and out of every corner, leaving the GTS needing to call on everything in its technical armoury to keep the Exige from walking away with it.

You can feel the Sport 410 work its Michelins harder (Cup 2s compared to the Cayman’s Super Sports – an option opportunity missed by Porsche), and with so much more grip it attacks every deviation along any straight with barely believable ability. It is the most natural of driving experiences – instinctive and oh so rewarding – and there’s nothing the Cayman GTS can do about it.

A victory for Hethel, then. But the bout doesn’t end there, because after every victory comes a new challenger, but in this case it’s a used one. When we started I told you to ignore the price until later and that time is now. Because for the same cost as this astonishing Sport 410 you can buy another mid-engined Porsche; a lightly used one with a naturally aspirated engine and a manual gearbox, and a chassis that offers elements of motorsport adjustability. A former eCoty champion, no less. Throwing the Cayman GT4’s hat into the ring would be an altogether tougher challenge for this Exige. Time for a rematch?

‘EVERY ROAD, EACH JOURNEY AND ALL TRIPS IN THE CAYMAN BECOME AN EVENT’