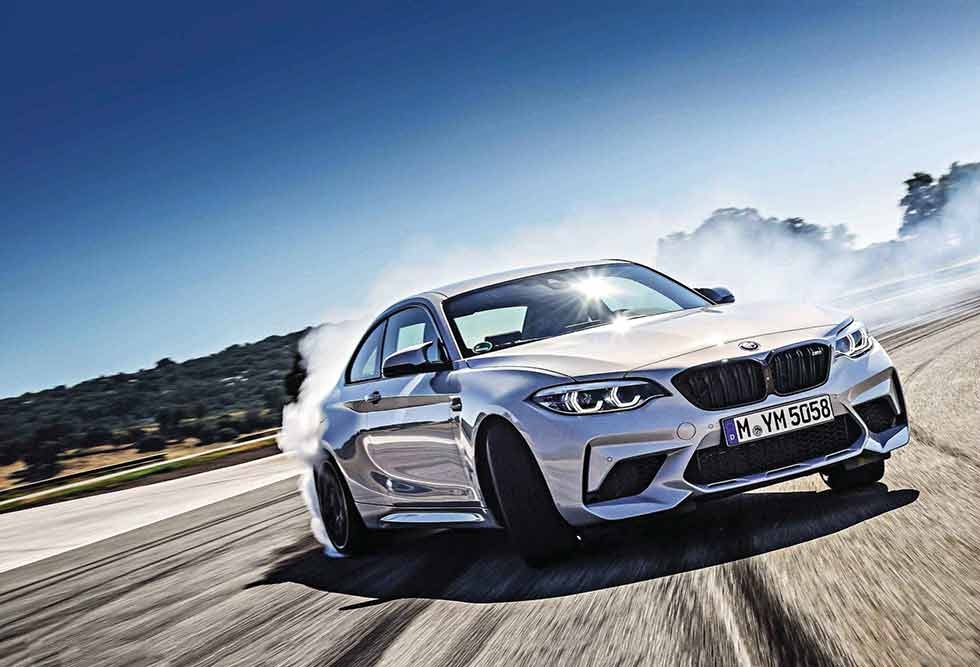 BMW’s smallest M-car has been extensively reworked, but is it enough to elevate the all-new F87 M2 Competition to the top of the class?

It’s always been a bit of a head-scratcher, the 2019 BMW M2 F87. On paper its combination of compact dimensions, thumping six-cylinder performance and good old-fashioned rear-drive fun should have made it the pick of the M line-up. Yet it never quite gelled. It always felt like a car engineered to a price rather than to the exacting standards we’ve come to expect of the M division.

You could find evidence of this in the M2’s slightly ragged handling, but the biggest clue to its somewhat mongrel status was its 3-litre turbocharged straight-six, which was essentially a lightly modded version of the N55 unit used in the now-defunct M135i. It wasn’t a bad engine, but neither was it an outstanding one. Preferring to do its work in the mid-range, it lacked both the top- end frenzy and nape-tingling war cry of proper M-cars. It sounded and felt, well, a bit ordinary. This is where the M2 Competition comes in.

It replaces the standard M2, and rather than undergoing a spot of light cosmetic surgery, it’s had a full-on heart transplant in the form of the M4’s glorious S55 motor, twin-turbos, ‘closed-deck’ block, lightened crankshaft, enhanced cooling system, strengthened pistons and all. There’s also a new exhaust system, complete with de rigueur active bypass valves for more bombast. The result is 404bhp and 406lb ft of torque – increases of 39bhp and 37lb ft respectively. Very promising, albeit slightly down on an F80/82 M3/M4’s 425bhp, even if the torque figure is a match.

The M4 also donates its carbonfibre brace for the front struts and bulkhead, increasing rigidity for more precise and accurate steering, or so the theory goes. Elsewhere it’s as before, which means the same M4-derived suspension, with the same spring and (passive) damper rates. However, the multi-link rear axle gets ball joints in place of rubber bushes, while both the electronically controlled rear differential and stability control have received some digital development to cope with the car’s ‘greater agility’.

It’s in at the deep end with the M2 Competition at the beautiful Ascari circuit that twists, rises and falls through the mountainous scenery of southern Spain. I’ve chosen a manual car (there’s a $2645 seven-speed DCT option, but the M2 has always been a natural three-pedal machine) and after a short briefing we’re out on the circuit for some high-speed ‘follow the leader’. A few things quickly crystallize, the first of which is that the duck to our ducklings, factory GT driver Nicky Catsburg, isn’t hanging about. The second is that the M2 is a car transformed. It’s the engine you notice first. Yes, the performance is stronger (top speed is a heady 174mph with the $2095 M Driver’s Package), but it’s the delivery that’s changed. It pulls from low down with the same lag-free muscle of the old unit, but it now hungers for revs, eagerly spinning to the 7500rpm red line with a lovely mechanical growl and a hint of turbo whistle. It’s enough to make 718 Cayman owners weep.

The body strengthening has also done the trick. The already meaty steering now feels more precise, the front end responding crisply to instructions. Traction is strong out of slower corners, while through faster stuff there’s glorious balance, with subtle stabilizing understeer easily neutralized with a lift or prod of the throttle. Switching off the stability control reveals a car that can be steered as effectively with your right foot as it can with the steering, the stiffer rear axle and tweaked diff delivering a more faithful and progressive breakaway. At

the end of our stint the only demerits are the six-speed manual’s slightly-baulky shift action and the grumbling of brakes – although they still stopped the M2 effectively.

Yet it’s on the road that the Competition really makes sense. The roads around Ascari are genuinely testing, running from smoothly surfaced and quick to tight and viciously lumpy. You notice the firmness first, the BMW jiggling in rhythm with the road at low to medium speeds. Yet pick up the pace and this tautness is your ally, helping keep the Competition’s cornering stance flat and tightly controlling body movements – only over a short but wickedly bumpy stretch does the car get unruly.

At saner speeds there’s virtually no front-end slip, the Competition simply latching tenaciously onto your chosen line. Yet there’s still plenty of scope for the car to show its playful side, the combination of generous torque, sharp throttle (you can now tune throttle and steering individually) and new-found precision in the rear axle allowing you to either revel in strong traction or tease the car’s tail out at corner exit. The M Dynamic Mode is particularly impressive, giving you just enough slide before gently intervening. And when you’re not chasing a lap time you can be more patient with the gearshift, finessing the stubby, short-throw lever. That said, such is the engine’s elasticity that along these switchback roads third is all you need, the twin-turbo pulling willingly from just over 1000rpm before howling to the wrong side of 80mph. Up here in the hills the agile and engaging M2 is a genuine hoot.

In fact, one word keeps springing to mind: fun. Make no mistake, the Competition is a serious piece of kit (the $3k premium confirms that), but it’s also always up for a good time. It allows you to access more of its performance and grip more of the time and, crucially places the driver front and center of the action. The head- scratching is over, because the F87 M2 is finally the car it always should have been and is arguably the pick of today’s M line-up.

Middle right: S55 engine contributes to an unfortunate 55kg weight gain, taking the total to 1550kg; the Competition is a small car then, but not a particularly light one.

If you’re talking fast and fun compact BMWs then you’ve got to start with the 2002 Turbo E20. An M-car in spirit rather than name, this 167bhp forced-induction pioneer built quite a reputation during its production run of fewer than 1700 cars. Killed off by the 1973 fuel crisis, its cause wasn’t helped by turbo lag you could measure on a calendar and edgy handling.

There were no such mistakes with the 1986 E30 M3, which set such sky-high standards for its agile and engaging handling that BMW has been struggling to recreate the homologation special’s magic ever since. Each subsequent generation of M3 got faster and more powerful than the original, but also got bigger and less involving to drive.

The Z3 Coupe of 1998 may not have been the last word in aesthetic grace or dynamic sophistication, but at least it was exciting. Combining a subtly detuned 317bhp version of the E36 M3 Evolution’s straight- six (late cars got the E46 M3’s engine and an extra 3bhp) with relatively crude semi-trailing-arm rear suspension, it was blisteringly quick in a straight line, blessed with a sonorous soundtrack and good fun in the corners – if your idea of fun was oversteering everywhere, even when you hadn’t planned to. It has rarity on its side, as well, with fewer than 1000 right- hand-drive examples finding their way to the USA.

As the M3 continued to grow, BMW’s next stab at a really exciting compact coupe was the 1M. With just 450 examples for the USA it was even more exclusive than the Z3 E36/7, but with suspension components pinched from the E92 M3 it promised to be more dynamically assured – although with such a short wheelbase its on-limit behavior is best described as ‘twitchy’. However, its bid for greatness was undermined by its engine, which, like the subsequent M2, featured a tweaked version of a standard 1-series unit, in this case the turbocharged 3-litre straight-six from the 135i F22.