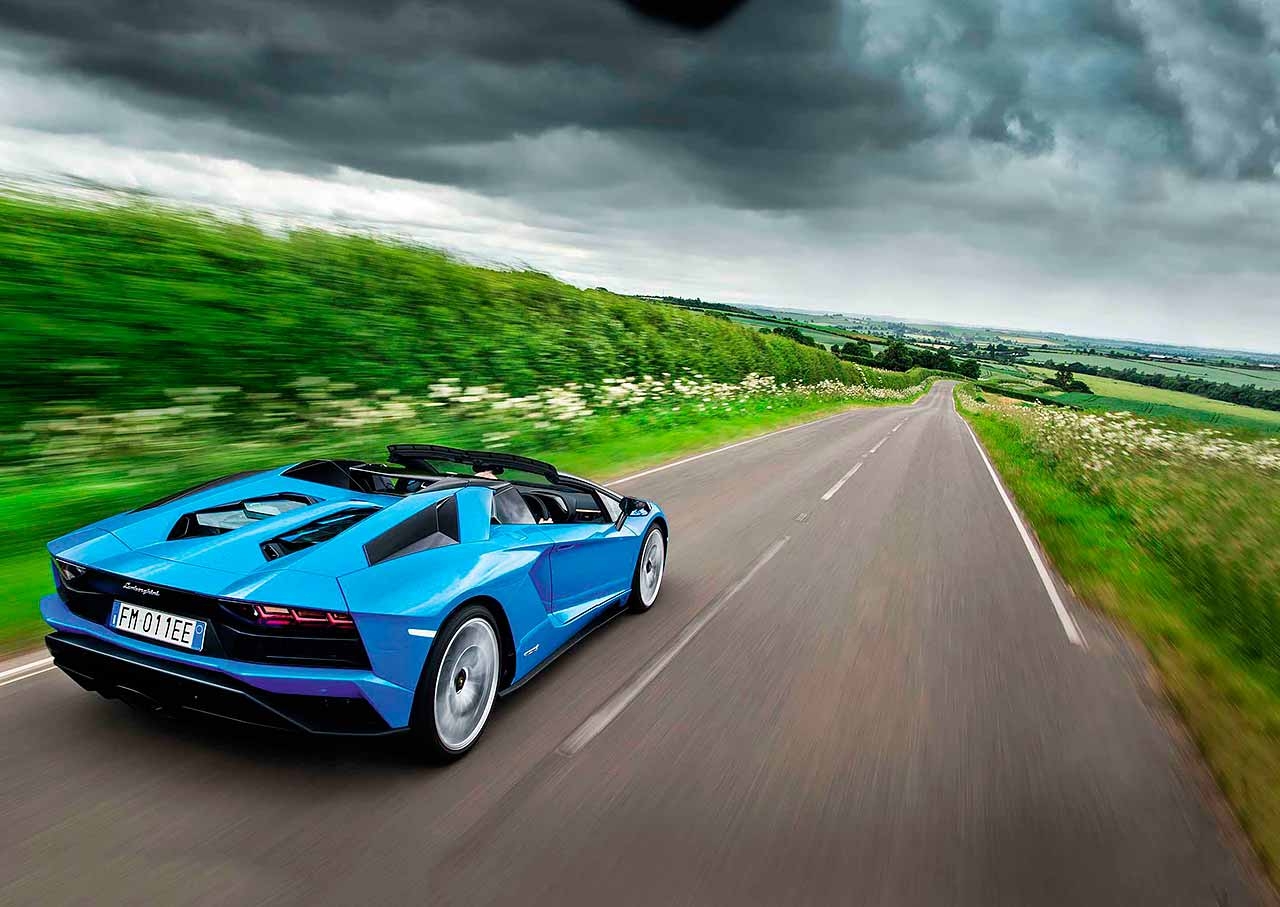 Lamborghini Aventador S Roadster Mechanically identical to its coupe sibling, this 730bhp drop-top V12 Lambo promises the same pulse-quickening thrills, but with the wind in your hair. Words and photos Stuart Gallagher.

Lamborghini will charge you an additional £30,608 if you want two removable carbonfibre roof panels on your Aventador S. Two small panels that, when you first come to remove them, will have you questioning if they are designed to be taken out at all. Get beyond the extraction phase and it’s then just the small matter of slotting them into their respective holders in the front luggage compartment – look for the little corresponding numbers on the panels and in the boot.

After my first attempt at all this I was impressed with the sub-15-minute time I had achieved. However, this was just long enough for Britain’s summertime to pause and the rain to return, and it then took a further ten minutes to no longer be sitting in a diamondstitched seat taking a fully clothed shower. Then the sun reappeared and so the roof came off and was stored again, this time in less than ten minutes, which is on a par with doing the same task on an S1 Lotus Elise.

And yet none of this matters, because if you are faffing with the roof of an Aventador S Roadster it means you also have the key to a car with a 6.5-litre V12, and that, no matter what the weather, is a very good thing indeed. The Aventador Roadster has undergone the same mechanical updates as the coupe to bring it up to S spec. So, more power (730bhp, up 40bhp on the old model) but the same 509lb ft of torque for the endearing V12 (yes, I mean ‘old’), a tenth quicker to 62mph (3.0sec) and a 217mph top speed. There’s also new calibration for the dampers, new spring rates and geometry, and the new Ego driver mode (for the benefit of any doubt an additional half a star has been awarded for this name alone). This mode allows you to mix your preferred engine, steering and damper settings from the Strada, Sport and Corsa modes.

There is also four-wheel steering, a new bespoke compound for the Pirelli P Zero tyres, and the same seven-speed single-clutch automated-manual gearbox, which is heroically awful if left in auto mode. But a Lamborghini isn’t about being automatic, it’s a bona fide supercar, so why wouldn’t you want to be integral to everything it does?

So switch to Ego and select Sport for the steering (Strada is unnaturally light for a car this big), Corsa for the engine (it’s a 730bhp V12, so why on earth is there the choice of a soft throttle response?) and leave the dampers in Strada (we drove the S Roadster in the UK, the number one country in the world for roads with potholes large enough to swallow an Airbus A380 whole). Now you’re ready, but only after selecting Manual for the gearbox and pulling the right-hand paddle to select first gear – unless you enjoy kangarooing down the road, of course.

Below 3000rpm the V12 doesn’t really do much. It sounds a bit industrial, too, without any of the cacophony of noises expected of an engine with this number of cylinders and cubic capacity. But at 4k the tone switches from a whirr to a wail and you’ve added another two thousand rpm to the crank speed before you know it. Now the S Roadster is up and sprinting and you’re in your own private screening of The Cannonball Run (Adrienne Barbeau and Farrah Fawcett optional), that magnificent V12 screaming at the top of its voice, bellowing its approval as you pass 7000rpm and home in on 8k. It may not have the sophistication of the truly wonderful Ferrari 812 Superfast’s V12, but an Aventador being wrung out to its red line is a magical experience. Just remember to lift before you pull the right-hand paddle to summon another gear… Thump! There she is. Best of all, there isn’t a single downside to running the S without a roof when it comes to dynamics. You can still place the car in a corner with an unexpected accuracy given its width and there’s enough feedback to mean it’s far removed from being the point-and-squirt machine many may think it is.

At lower speeds you’ll encounter some push from the nose as the fat front Pirellis run across the surface rather than bite into it. At medium-to-high speeds it flows much better, the tyres digging in as the Italian inspires unexpected confidence to hustle it as much as you feel comfortable with. And you will feel comfortable, because there are times when it feels like an overgrown Elise, preferring precision and measured inputs to being thrown around like a Mitsubishi Evo.

With the nose turned in and the car settled, you can summon those 12 cylinders to come and do their thing and work all four corners. And as you feed in the power the Aventador squats a little, forcing those poor Pirellis into the surface, and all four tyres claw their way out of the corner.

From the inside it feels remarkably controlled, balanced and so much fun; if you’re fortunate to be following it, it looks like it’s floating across the surface with a delicacy at odds with the violent soundtrack bellowing from its three exhausts. It’s one of those rare cars that you gain as much enjoyment from watching it at work as you do from making it work from behind the wheel.

I’m sure the cliché goes that you could comfortably drive an Aventador S Roadster to the south of France along the autoroutes with the roof up without any sacrifice to refinement over its coupe equivalent (and you could).

And upon arrival you would then soak up the admiring glances along the Riviera with the top down, V12 whirring, head burning. But truth be told you’ll want the roof down all the way and you’ll want to seek out the most challenging route you can find and leave the autoroute to those with no choice or imagination.

Because despite its shortcomings in terms of packaging, the offset driving position and the (very old) Audi infotainment system, this is a V12 Lamborghini that wants you to enjoy every mile behind its wheel. Seek out the right route and you will wear the biggest grin of anyone on the road. Even after you’ve finished arguing with that roof.

+  As dynamic as the coupe; engine sound above 4000rpm