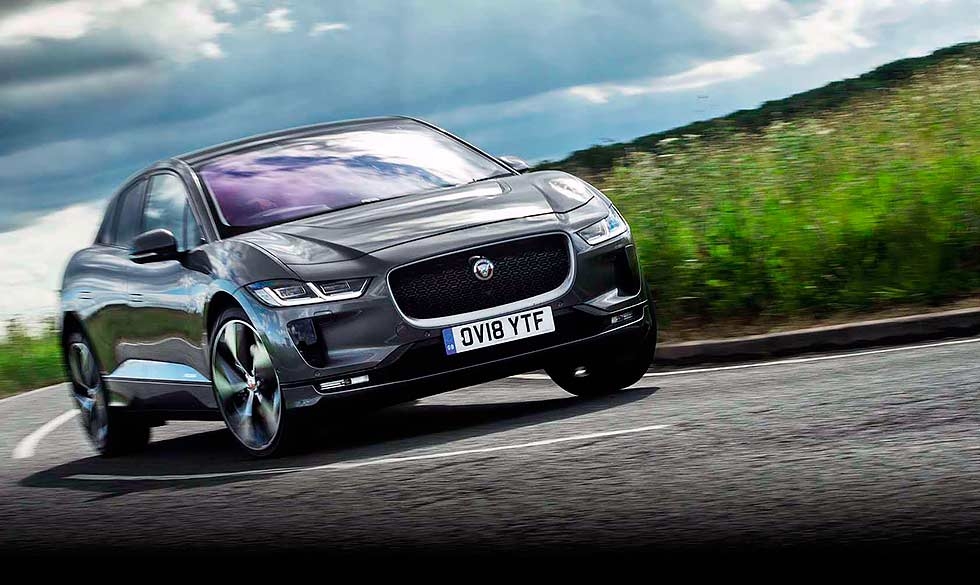 It’s possibly somewhat shocking to see an all-electric SUV gracing the pages of Drive-My, but bear with us, because the Jaguar I-Pace really does deserve your attention. Why? Because this is arguably the first mainstream battery-powered car that delivers some genuine driver entertainment. Yes, all the normal ownership concerns about running a pure EV remain (range anxiety, poor charging infrastructure and the like), but if this type of car fits into your lifestyle and you’re looking to go electric, then an I-Pace should arguably be at the top of your list.

The Jaguar’s raw statistics certainly make for interesting reading. For starters, its twin electric motors (one for each axle) develop a combined power output of 394bhp, which along with 513lb ft of torque (available from zero rpm) allows the I-Pace to sprint from 0 to 62mph in an, ahem, electrifying 4.8 seconds.

Arguably it feels even quicker on the road, particularly up to around 80mph or so, the combination of instant torque, four-wheel-drive traction, a sharp throttle and an eerily quiet (you can choose some internal-combustion sound effects, but why would you?) and linear delivery giving the car the other-worldly feel of being zapped from point A to point B almost by teleportation. Yet fun though the performance is, it is nothing new – Tesla has been pulling this trick for years. No, what’s impressive about the I-Pace is how it handles the bendy bits between the straights it has just shrunk.

Key to its ability is a low centre of gravity. It’s not a light car (our scales recorded a figure of 2225kg against Jaguar’s claim of 2208kg), but by placing the 90kWh battery pack below the floor and between the axles, engineers have been able to keep the masses low. It’s further helped by the fact that, despite its SUV billing, the I-Pace is barely any taller than a BMW 5-series saloon. And by using an electric motor for each axle, Jaguar has been able to push all four wheels out to the corners, achieving a 50:50 weight distribution.

Suspension is by way of double wishbones at the front, while the rear uses a version of Jag’s independent integral link system. Lesser I-Paces get passive dampers and coil springs, but the flagship, £81,495 HSE First Edition tested here is on adaptive dampers and air springs, allowing you to raise the ride height for some light off-roading, if that’s your thing. The first thing you notice is how supple the I-Pace feels. There’s some fidget and thump over smaller imperfections (blame the vast 22-inch alloys for that), but for the most part the Jag sails serenely over scarred tarmac. The steering is meatily weighted, and at 2.5 turns lock-to-lock it’s also quick, giving the I-Pace an immediate sense of agility. In fairness, there’s not much in the way of real feedback, but the car responds crisply to your inputs, while the front tyres stick to your chosen trajectory with tenacity. And while there’s some roll, it’s not as pronounced as you’d expect, particularly when you toggle through the driver modes to the Dynamic setting. Not only does this add some tautness to the damping, it also brings even more urgency to the throttle and a little extra heft to the steering. Use the I-Pace’s grip, poise, traction and performance to full effect and it can cover ground at a startling rate.

Perhaps most surprising is the car’s adjustability, with its rear end gently rotating either with a lift of the throttle mid-corner or when trailing the brakes into a bend. And on the exit of a turn the I-Pace’s ability to work its motors independently means there’s a sense that the outside-rear wheel is being subtly overdriven, edging the tail round for a straighter exit. There’s some genuine fun to be had here – although it’s more Porsche Macan than Porsche Cayman. Of course, the I-Pace can’t defy physics, and when pushing it really hard its mass starts to tell, the front end starting to push wide before being scrappily checked by the ESP.

As with other EV models, there are some rather less obvious driving pleasures to be had behind the wheel, such as mastering the regenerative braking. You can adjust the level of off-accelerator retardation, and in its strongest mode the I-Pace effectively becomes a one-pedal car, with even small lifts of the throttle slowing the Jag significantly. It’s so effective that before long you’re challenging yourself to travel as quickly as possible without touching the brake pedal. When you do need to stop in a hurry, the transition between regenerative and friction braking is smooth enough that you’ll struggle to spot the switchover.

What about the rest of the car? Well, the interior is spacious (the I-Pace is shorter overall than an XF, but has a longer wheelbase) and strikes a nice balance between techy and traditional, with numerous TFT screens sharing space with some tastefully applied wood and leather. Even the exterior grows on you, looking more like a four-door coupe with big wheels than an SUV. The I-Pace is also effortlessly quiet and comfortable for the daily grind, while Jaguar reckons on nearly 300 miles between charges – although expect that range to drop significantly if you make full use of the performance. It’s also worth noting that, even with a home fast charger you’ll need ten hours to fully replenish the cells.

It’s not perfect, the I-Pace, but if you love driving it’s the most convincing series production EV yet, particularly when you consider that the £63,495 entry-level model – which offers the same power and torque outputs as the HSE – just undercuts the cheapest Tesla Model S. More importantly, it gives hope to people like us that an all-electric future might be something to look forward to.