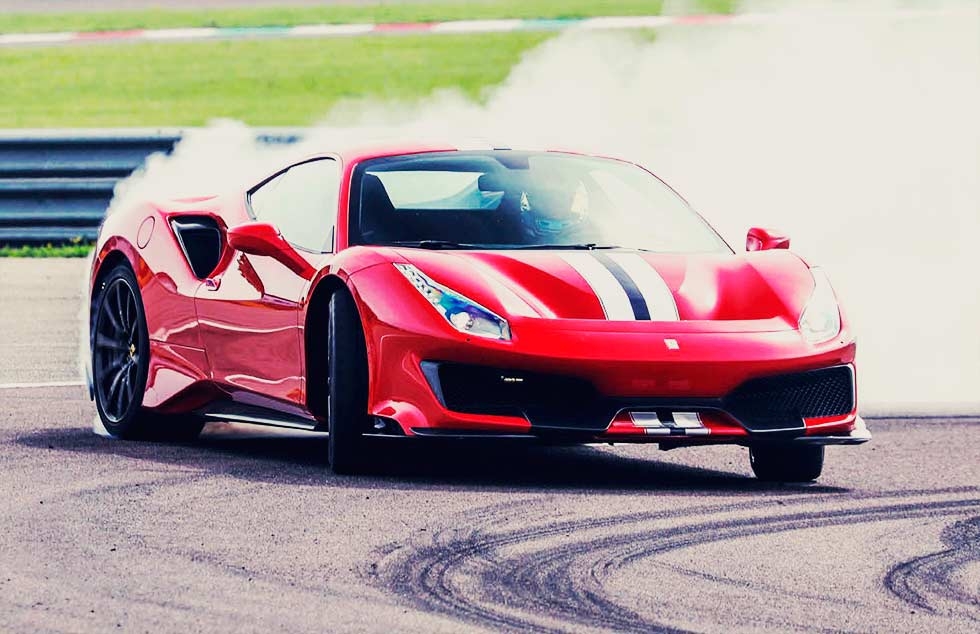 Pista Perfect? Could the new 488 Pista be the best car Ferrari has ever made? An extended road test in Italy is our best chance to find out. Story by Chris Chilton. Photography by Roberto Carrer.

Something’s not right. I’m ready to take to the track in Ferrari’s new 488 Pista but as I approach the open door I’m told my headgear isn’t up to it. In my 15-plus years of testing cars at Ferrari’s Fiorano circuit, this is the first time I’ve ever been asked to wear a helmet. Even back in 2014 when they tossed me the keys to the 950hp LaFerrari, my casual query about whether we perhaps ought to be wearing lids was met with a dismissive: “It’s a road car, you don’t need one.” The reality is that common sense and lawyerly advice has finally curtailed the unfettered laps, but you can’t help but think it’s a fitting coincidence that this policy change has happened at the launch of a car so obscenely rapid, and clearly track-inspired as the 488 Pista.

Regular readers will know that we’ve already had a brief track drive of the £252,765 Pista, the spiritual successor to the old 458 Speciale – a harder, leaner, faster version of the £197,488 488 GTB. But this opportunity is far fuller: track time at Fiorano, yes, but also some proper road driving.

Although Ferrari claims this car features more motorsport technology than any of its previous road cars, is named after the Italian word for ‘track’, and is more likely than any other current Ferrari to be taken on circuit by its owners, the fact remains that only 60 per cent of them will do that, and even then perhaps only once.

So we’ll leave Fiorano for now and head out on to the roads. First we need to store our bags, whereupon we realise something that should have been obvious from the outside. That sexy hole in the striking, optionally-striped (£8640) bonnet – part of an F1-derived aero device called an S-duct that hoovers air up from the front of the car and sucks it close to the curvature of the bonnet as it exits – might do wonders for downforce, it’s not great for the weekly shop. Luggage space is down from a generous 230 litres to just 170 litres, though that’s still plenty for a helmet and pair of Sparcos, even if they are just for show.

There’s a useful shelf behind the seats, and a storage tray in the console where a handbrake would have been in days gone by, but there’s not much else in terms of storage. In fact, there’s not much else in terms of anything. No carpets, very little soundproofing, and simple, manually adjustable bucket seats. A prod of the big red starter button on the carbon-and-leather steering wheel reveals something there is definitely more of: noise. In answer to criticisms that its turbo engines don’t sound as good as their naturally aspirated predecessors, Ferrari has worked hard on the acoustics. The Pista is apparently 8dB louder than the GTB from the passenger seat. But from the moment we roll out of Fiorano’s gates, it’s clear the Pista is far less intimidating, and far more civilised than it looks. Even at low speeds, the differences between this and the ‘ordinary’ 488 are clear. The ride comfort is good, if noticeably less good than on the standard car, and the steering feels tighter, more responsive, and a shade weightier, all of which can be linked to the latest version of Michelin’s Pilot Sport Cup 2 tyre and its stiffer sidewall.

Fundamentally it’s as easy to drive as Ferrari’s cruisy Portofino coupe-cabrio thanks to the seven-speed dual-clutch gearbox Maranello first introduced on the 458 back in 2011. Unlike some supercars, the 488 has excellent forward visibility and it’s great fun watching those pronounced wing peaks frame the oncoming traffic as we make our way south past Pavullo Nel Frignano and up to the hills.

It’s a 45-minute drive from Maranello to the good roads out here, and as the traffic thins we’ve toggled our way from the steering wheel manettino’s entry-level wet setting with its ultra-cautious stability system and soft throttle map, to livelier Sport mode. And when we finally shake off the dawdlers and see an open stretch of road ahead, squeeze that steering wheel ever so slightly firmer in anticipation and then sink the right pedal, it’s already clear this is a very serious bit of kit. Most of us are familiar with turbo engines’ momentary delay between right foot requesting a dollop of extra power and the small of the back receiving it. But in the Pista, it’s almost – almost – impossible to detect. And when the kick does come, it comes so hard that the only ‘lag’ you’ll be worrying about is your brain keeping up with the scenery being delivered through the windscreen at warp speed.

The engine is fundamentally the same 3.9-litre V8 used in the 488 GTB but over 50 per cent of the components are different because the Pista borrows heavily from the 488 Challenge racer. So there are shorter induction plenums, new cams and exhaust manifolds and a lightweight flywheel and titanium rods, all of which helps save 18kg from the kerb weight and add a solid 50hp to GTB’s 670hp total.

That alone would be enough to drag the Pista clear of its GTB brother in a straight fight, but on top of the 18kg saved from the engine, there’s a further 70-oddkg lost from the rest of the car thanks to the stripped interior, Lexan rear window and carbon wings, bonnet and bumpers. And if you really want to get serious – serious about performance, but more than likely, about the pose – you can throw on a set of carbon wheels and save another 2kg (in total) for around £13,000…

Around 90kg down, then, and fortified to the tune of 50 horses, the Pista reaches 62mph in 2.85sec and 124mph in 7.6sec, compared to 3.0sec and 8.3sec for the GTB. It sounds more serious, too, particularly past 4000rpm when the Pista really asserts its superiority.

There’s a crisper edge to the exhaust note and far more of it, and when the rev needle homes in on its 8000rpm cut-off and your ears are ringing to the sound of 720 horses at full gallop, it’s hard to feel less than buzzing. Yet we’d be lying if we said it sounded anything like as exotic as the naturally aspirated 458 Speciale at its 9000rpm redline.

Dynamically, though, the new car is dynamite. As we carve through the villages that line the SP4, then flick left across the bridge and up the hairpin-strewn SP26 towards Zocca, you feel the advantage of the new, stiffer rubber at each corner and of every kilo saved. I’ve driven pretty much every Ferrari built since the millennium over these roads, and – noise apart – this has to be the best. The front end is so precise, and the chassis so good at delivering almost zero roll while still keeping the fat 20in tyres keyed into the road, that you can’t help but laugh out loud at the liberties you can take. And let’s give the brakes some love. They’re carbon ceramic, of course, but the servo comes from the 488 Challenge car; the pedal efforts are high, but the feel is fantastic.

Back at Fiorano that afternoon, we are able to really punish those brakes, as well as explore the new Ferrari Dynamic Enhancer, which sounds like some kind of marital aid, but is actually the latest generation of Ferrari’s oversteer control. Previously Ferrari has linked the e-differential to the traction control and dampers to help drivers build confidence driving beyond the tyres’ limits, but now it’s added the brakes to the party.

You access the FDE by twisting the manettino past the RACE setting (which prioritises fast and neat over playful) to CT-off. The FDE is so subtle that you’re barely aware it’s working at all – except that you’ve somehow turned into a driving god who’s able to exit fourth gear corners in a 720hp supercar with half a turn of opposite lock as if it’s the most normal thing in the world. And if you really are a driving god, like Ferrari’s head test driver, Raffaele de Simone, and you rein in the sideways stuff, you can make the most of the downforce created by the front S-duct and 488 GTE racer-inspired rear diffuser to hustle the Pista around Fiorano in 1min 21.5sec. Not quite a match for a LaFerrari (1min 19.7sec), but 1.5sec ahead of the 488 GTB.

Normally that would be the end of the drive programme, and for the other journalists it was. But we manage to twist Ferrari’s arm sufficiently that they let us have the car for another day with no other instructions than to be back at the famous front entrance with the car in one piece by early afternoon. So bright and early the next morning, we arrive back at Ferrari waiting patiently to be given the keys to ‘our car’. This time we head further south to explore some of the hundreds of other hidden treasures in the mountains between Maranello and Florence. But perversely, the most illuminating part of it all is the gentle ride back on the autostrada. Freed from the compulsion to drive as fast as humanly possible, we’re reminded of some of the Pista’s inherent weak points: its fiddly multimedia system with a minute screen buried in the dash; the annoying indicator buttons on the wheel; and how the awkward optional (£2112) race harnesses are when you drop something on the floor or have to reach out for a toll ticket.

But we also discovered a car that is far more useable than we expected. The Pista is on another plane in terms of performance compared to the 488 GTB, yet its ride comfort and motorway noise levels are so good you’d think nothing of jumping in it and driving to Spa or the Nürburgring for a weekend of crazy laps. The huge £56k premium over the already sublime GTB might help you work out which you’d rather have, but for potential Pista owners, a more pertinent one might be whether they’d prefer this to a barely used 458 Speciale (the last great naturally aspirated mid-engined Ferrari sports car), which costs around the same. Now that sounds like a great idea for a story.