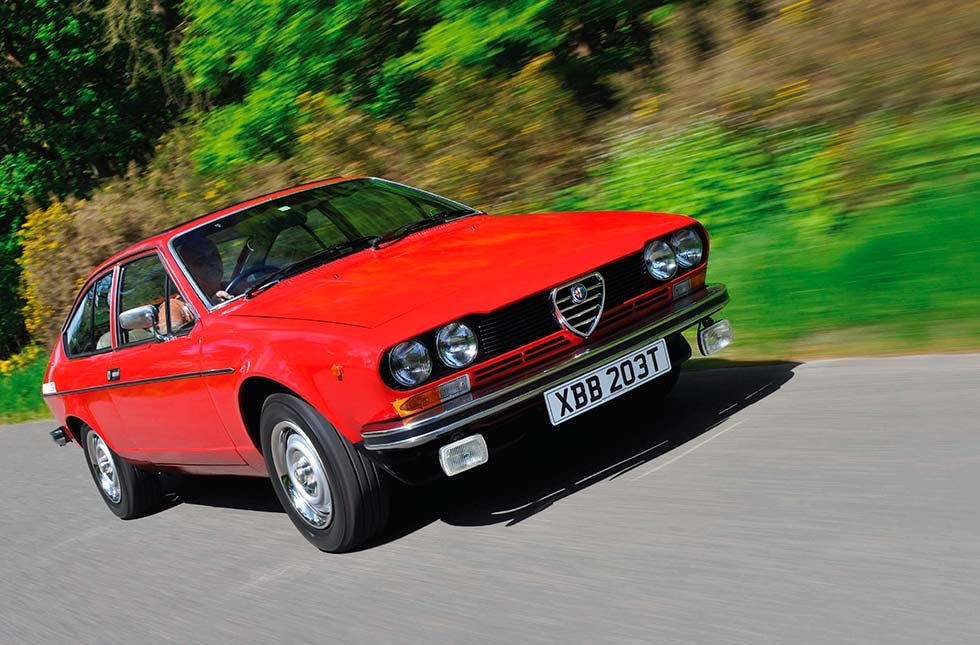 Something Special We’d never even heard of the Alfetta GTS special edition until we saw this beautifully restored example. It’s even more special now: it’s the only one left on the road. Story by Peter Nunn. Photography by Michael Ward.

Imagine an Alfa Romeo version of Mastermind. Plenty of scope there, given the company’s exceptional 100 year-plus history. But how about this for one of the specialist questions: just what is an Alfa Romeo Alfetta GTS?

Well done if you know the answer, because frankly we’d never heard of the GTS before meeting Andy Norton. Well, it’s a special edition version of Alfa’s sleek 1.6-litre Alfetta GT coupe, which was offered to UK customers for a spell during the late 1970s.

Not many of those left now, you’d think, and you’d be right. In fact, just two. One of them isn’t roadworthy. And the other? Well, you’re looking at it right now: the much admired, prize-winning 1979 Alfetta GTS coupe belonging Suffolk-based enthusiast Andy Norton.

It was back in April at the Alfa Romeo Owners’ Club (AROC) Spring Day at Duxford that Andy’s pristine Alfetta GTS first came to the notice of Auto Italia. In among the ranks of hundreds of Alfas, early chrome-bumper Alfettas are an increasingly, and regrettably, rare sight these days. Even more so in pristine, original condition, let alone special edition GTS trim. AROC also took note, leaving a note on Andy’s windscreen. At the close of play, he was called up by the club’s committee to be awarded the Best Classic in the Show prize.

Like us, the club had recognized that here was a very special car, a wonderful period piece in wholly original spec. Adding something extra to the mix is the fact that Andy had completed the entire restoration himself, rebuilding the Alfetta in his workshop at home over a period of 18 months.

“I first saw the car for sale on Car & Classic,” he recalls, “as I was looking for a car to restore. I’d never heard of the GTS myself so I looked it up on the internet and saw the brochure, just to see if it was authentic, to be honest.“

A wise call. If you tap ‘Alfetta GTS’ into your browser, up the brochure will come. Seductively, the intro sets the scene: “The Alfetta GTS joins the world acclaimed Alfetta range of high performance coupes, cars designed solely for the discerning motorist. The people who demand high speed, perfect road manners and classic styling.”

It then goes on to describe the Alfetta’s style, the engineering balance (1.6-litre twin cam with rear transaxle), creature comforts and spec. There’s a box at the end describing the range of the GTS’s special features. Get ready for Alfa Romeo velvet seats; Alfa Romeo factory-fitted tinted glass; Skysight sliding roof by Hollandia; front electric windows by Servoglide and rear window wash/wipe by Hella. Also included were twin front and rear Hella fog lights; lightweight chrome trim for wheels and exhaust; protective side mouldings; GTS insignia on both sides and at the rear, plus, inside, controls for the electric windows and fog lights that echoed the Alfetta Strada, more of which anon.

Putting it into perspective, back in 1978 a standard Alfetta 1.6 GT was listed by Alfa Romeo GB at £4999. Alongside, the GTS was up for £5499, which strikes us as pretty fair value considering all the extra kit on board. Meanwhile a GTV 2000 cost £5999 with – anorak alert – a special edition Alfetta GTV Strada (effectively a 1962cc edition of the GTS) up for £7499. Andy’s GTS was first registered by Bridge Motors of Colchester in 1979, and the dealer’s original sticker still resides in the rear window. The car’s second owner in 1980 was Chris Howell from Saffron Walden who ran it for seven years, then took it off the road with 57,000 miles on the clock when the body started to go south. Like a true Alfisti, however, he still absolutely loved the car and was reluctant to sell it.

Fast forward nearly 30 years and the GTS lands in Andy’s hands via an intermediary after its owner had decided he was never going to get it back on the road. At the same time, he couldn’t bear the idea of somebody buying and scrapping it. Fortunately, the GTS made its way to the best possible home; great news, as it could easily have gone the way of so many Alfettas. Its bodywork was poor along the bottom, around the wheelarches (where they usually go) and well beyond. Originality was key. “I thought it’s just got to be worth saving,” recounts Andy and he’s absolutely right.

So in June 2015, the GTS’s remarkable restoration began. Remarkable because Andy essentially did all the restoration work on the Alfetta himself at home, including painting, all the while determined to keep it as original as possible. Helping this process along was undoubtedly the fact that he’d constructed a large garage/workshop in his back garden, complete with ramp. Although the Alfetta GTS was broadly all there, Andy was faced with a sizeable stack of work to get through.

Remedial tinwork included new sills (the inners were OK), inner wings and wheelarches, plus repairs to the lower wings, front and back and spare wheel carrier. Mechanically, the GTS was intact yet Andy had to strip everything down. Both brake and clutch master cylinders were replaced, as well as the clutch slave cylinder. New brake pipes were made up where necessary. Callipers were refurbished. Discs, pads and tyres were replaced. So was the exhaust, which is Italian-made yet was found in Germany. Noted supplier Highwood Alfa supplied many parts, while a source in Germany also supplied the inner sills. “I bought a box of bits with the brakes from Germany, too, “ chuckles Andy.

“When I first got the car, it took me a while to get the engine running again as it had not been started for many years. The engine itself was in good condition but I either had to replace or take off and clean and paint just about everything under the bonnet.

“New parts included petrol pump, distributor cap, leads, points, plugs and coil. I sourced a second-hand radiator from Germany and replaced all the coolant hoses. The carburettors were stripped as the old stale petrol has turned to a varnish like substance. Pretty much everything on the car, even underneath, has been cleaned and painted.”

And those eye catching GTS side moulding strips? The originals were a bit broken up in places. New ones made their way from America. “I was lucky enough to get the exact size and texture as the originals. I have to give credit to my daughter Emily for tracing the original white GTS decal stickers from the car and producing a template on the computer which she then sent off to the vinyl printers. When they came back, we held them alongside the originals and they were perfect.”

The GTS restoration was completed in September 2016. Andy is not exactly a stranger to the Alfa world: a 156 and 166 have previously served as everyday cars. But the Alfetta GTS is different and it’s that superb Giugiaro wedge design that still sets the car apart and has lasted the years so well.

The GTS is also from that imaginative era when Alfa placed the speedo slap in front of the driver, with the rev counter way off in the middle with the other instruments – very oddball when new, a great period piece now.

Time for a drive and a step back in time. When was the last time Alfa offered velvet seats and a cassette player? Happily, you encounter both as you step into the GTS, conscious also of that steeply raked front screen and big inviting view out across the Alfa’s wide, flat bonnet. It’s a good start.

For someone coming from an earlier 105 Series GTV coupe, like your correspondent, the Alfetta immediately feels the more modern, roomier GT car, offering a more forgiving driving position – perfect, in fact, as a long distance cruiser.

Some things do carry over, however, such as that ever-characterful four-cylinder twin cam engine up front. Displacing 1570cc and wearing twin Webers in this case, it’s good for 109hp and 105lb ft of torque. Oh yes, that deep, rich Alfa engine rumble is still as evocative as ever, the twin cam revving easily, feeling both potent and flexible.

“Underneath, the balance and traction of the Alfetta layout was a big advance over the 105s,” notes Alfa doyen Jon Dooley, who successfully raced Alfettas in period for the Alfa Dealer Team. “But on cars up to about 1981, the front end geometry and damping needed improving to stop them rolling onto the outside front wheel.”

A fix was created, something Andy might perhaps want to investigate sometime in the future as he confirms that the GTS still wears its original dampers and appears quite softly sprung. That’s fine for ride comfort but handling sharpness is a trade off.

At the same time, the Alfetta’s transaxle driveline was famously challenging to get right and correctly aligned (with reports of 22 different variants of prop rubbers also adding to the fun). On Andy’s car, the gear change is a bit woolly and second gear is sometimes elusive. But as wise old Alfa hands will recall, many were like that in period, so you could say this GTS is period correct…

Full credit to Andy Norton for rescuing and restoring this superb 1979 Alfetta GTS so diligently. It’s a truly fantastic piece of work. His next project is an NSU Ro80. It’s a shame there’s no Italian connection with that car because it would surely make a great 1970s back-to-back feature with the Alfetta, don’t you think?

“When was the last time Alfa Romeo offered velvet seats and a cassette player in a car? ”

GTS has been lovingly restored, even including brand new decals sourced from the USA. Items unique to the GTS include wheel trims, side rubbing strips, Hella fog lights and a sunroof.