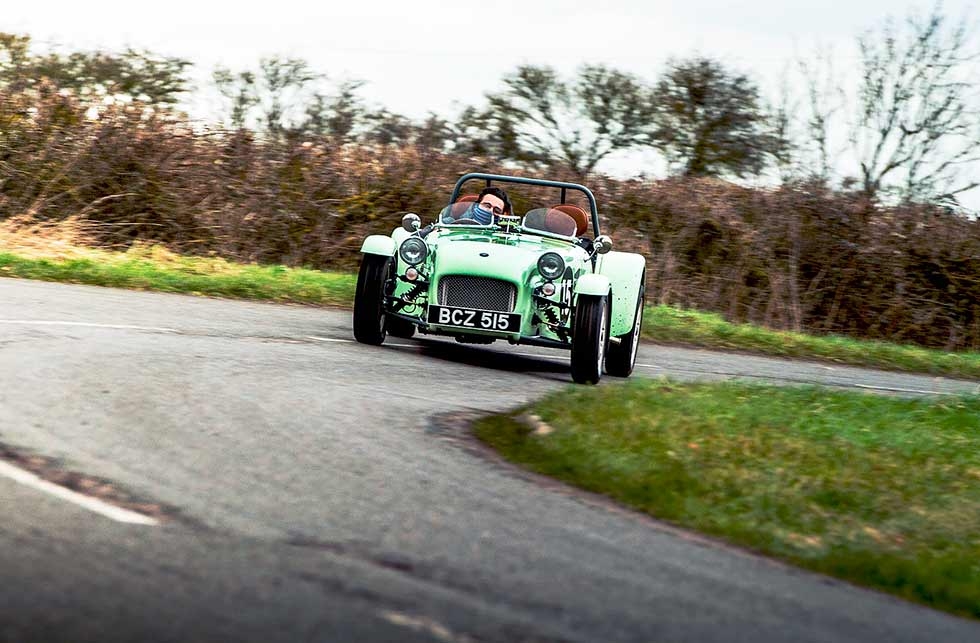 2019 Caterham Seven SuperSprint. If you don’t mind stumping up an extra $10,000 for the privilege, Caterham’s new retro-inspired SuperSprint represents a rewarding upgrade over the entry-level model. Words by Will Beaumont. Photography by Aston Parrott.

Testing a Caterham, one without a roof and with only two measly semicircles of glass as a windscreen, in February, probably isn’t the greatest idea. At the very least you’d expect it to be tricky trying to fit into the cramped cabin of a Seven when togged up in full winter garb. But the SuperSprint’s lack of, well, anything means access is relatively easy and there’s nothing to impede movement once you’re nestled inside. Even dressed in multiple layers there’s a surprising amount of freedom to operate all the controls.

The SuperSprint, like last year’s limitededition Sprint, is based on Caterham’s current lowest-powered model, the 160. It has the same three-cylinder, 660cc turbocharged Suzuki engine, but rather than making just 80bhp, here it puts out 95bhp. To harness all that extra performance – yes, really – the SuperSprint’s live rear axle has a limited-slip differential and the suspension has been retuned and made firmer.

Like the Sprint before it, the SuperSprint has a distinctly retro appearance, but with more of a race-inspired aesthetic this time around. It certainly falls on the correct side of tasteful. The brown leather interior and metal switchgear give a classy look, while the small front arches, silver mesh grille, chrome headlights, painted steel wheels and glass wind deflectors could have come straight from a ’60s race-prepared Seven. As nice as they are, however, they don’t quite justify the extra $10,000 that the SuperSprint costs over a factory-built 160.

The tiny bits of glass are optional and can be replaced by the conventional windscreen. Or, if you know you’ll never convince anyone else to join you in your SuperSprint, you can have just one wind deflector and one seat. While the deflectors look cool, they aren’t ideal, as you’ll find yourself needing to look around or over them as well as through them, with the latter view appearing slightly distorted. And that’s when the glass is clean; as soon as it clouds up with dirt and grime you lose a large section of your view because there are no wipers and, as you’re locked into place by a four-point harness, you’re unable to reach the glass to clean it.

In the 160 and the Sprint you can make good progress, but it’s always the olde worlde charm of the chassis and the quaint handling that keep you amused rather than your attention being grabbed by the speeds being achieved. The SuperSprint’s performance is a notch up: its extra power means the car accelerates far more savagely than you might expect, so it’s easy to find yourself inadvertently clattering into the 7700rpm limiter. This added ease to the acceleration, with speed building rapidly from lower revs, also means you’re very quickly travelling faster than might seem appropriate when there’s next to nothing to protect your face from the elements. Although the SuperSprint’s iteration of this engine has a slightly different character to the less powerful version, the noise it makes is the same as before, being coarse and industrial most of the time, with the occasional flutter and chirp from the turbocharger and wastegate.

The Seven’s tiny size does make you feel vulnerable, but there are benefits. You have at least twice as much spare tarmac to work with on your side of the road than you would in a small hot hatch, and this means you can carve a distinct racing line though a corner without worrying the catseyes. The SuperSprint’s firmer suspension makes it far more composed over rough roads than the 160, too; the rear axle doesn’t hop up and down in response.

Front-end grip is by far the chassis’ weakest characteristic. Barrel into a corner too quickly and you watch the front tyres turn, but the nose continues straight ahead. The room you have on the road means this isn’t that scary, and you often have time to wait for the front to hook-up and eventually turn in before you get close to the verge or the wrong side of the road. A better tactic, though, is to be aggressive with the wheel and throw the SuperSprint into a corner early, causing the rear to slide as you point the nose at the apex. You can then drive the car out of the corner on the throttle.

Despite the extra power, you can’t quite maintain a long slide throughout the turn, even in the wet, as the SuperSprint eventually starts to point straight again, even with your foot flat to the floor. It’s a similar cornering style to the one that works best in the 160 and Sprint, but forward momentum and grip are what dictate the end of the slide in the new car, rather than the inside-rear wheel spinning and wasting away all the power. Exiting a corner in the SuperSprint is neater, easier to control and far faster as a result.

The 2019 SuperSprint is certainly a quicker and more serious car than the 160 or Sprint, yet it retains the same playful spirit. What really speaks volumes, however, is that even when accelerating your exposed face through some exceptionally grim wintry weather at around 60mph, the SuperSprint is still huge, grin-inducing fun. On a warm summer’s day it could, possibly, be unbeatable.

Left and above: period racing decals, Innes Tan leather and wood-rimmed steering wheel give the SuperSprint an appealingly retro feel.

+ Accessible limits but with proper pace

– Leaves the driver frighteningly exposed to the elements