Downsizing and reducing the cylinder count, accompanied by turbocharging for improved efficiency, is how most car manufacturers are meeting the increasingly stringent emissions and fuel economy regulations that are so prevalent these days.

‘MTM NORMALLY SET THE RIDE HEIGHT 35 MM LOWER IN FRONT AND 30 MM LOWER AT THE REAR, BY USING A SET OF KWHEIGHT-ADJUSTABLE LOWERING SPRINGS…’ 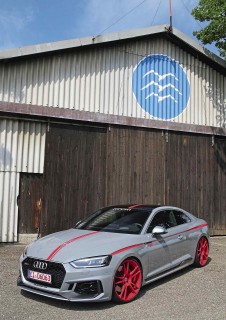 However, in replacing their naturally-aspirated 4.2-litre V8 with an all-new bi-turbo 2.9 V6 Audi threw their traditional RS4 and RS5 customers a bit of a curved ball. While it is agreed that the silk-ripping aural signature of the new 2.9 TFSI V6 cannot match the NASCAR grade theatre of the higher revving, naturally-aspirated bent crank V8 that went before, there is an instantly recognisable and appreciated upside.

The new (EA 839) twin-turbo Engine may only have the same number of horsepower, but it has significantly more torque on tap. And since the engine itself only weighs 182 kg without ancillaries, the reduction of 31 kg over the big naturally-aspirated V8 in the nose not only benefits handling but also reduces the destabilising effect of weight transfer under hard braking.

For aftermarket tuners like MTM, though, these power output and torque figures are just the starting point. With the scope for tuning a forced-induction engine being so much greater in terms of potential gains and bang for your buck, it is a no-brainer that the chips should fall on the side of the bi-turbo V6.

‘Using our M-Cantronic add-on ECU we were able to achieve an easy and reliable 532 hp,’ says MTM boss Roland Mayer. ‘A bespoke ECU upgrade adds a further 20 hp, increasing the size of the stable to 552 horses, while still remaining within the performance envelope of the factory turbochargers.’

However, the stock turbochargers fall short of the airflow volume required by the Stage 2 conversion that MTM is working on now, so the engineers are experimenting with a pair of larger turbochargers between the engine’s Vee. This will be augmented by a 100%more efficient water-cooled intercooler system that MTM calls its Thermodynamic Package.

Once this new hardware has been matched by bespoke software mapping Roland’s engineers say they should be able to approach the magic 600 hp mark, accompanied by a peak torque figure of 800Nm.These are truly enormous numbers for a 2.9-litre V6 engine.

The four-outlet sports exhaust with carbon-fibre tailpipe trims that can be added to even a standard RS5 also provides a few extra horsepower thanks to lower back pressure, not to mention that it looks good and sounds even better. At 1,655kg the RS5 R is not light, but its quattro all-wheel-drive deploys the 552hp and 700Nm of torque with maximum effect, rocketing the car to 0-62mph (100kph) in 3.6 seconds, and past 200kph in 12.5 seconds on the way to its delimited 280km/h top speed.

‘IN REPLACING THEIR NATURALLY-ASPIRATED 4.2-LITRE V8 WITH AN ALL-NEW BI-TURBO 2.9 V6 AUDI THREW THEIR TRADITIONAL RS4 AND RS5 CUSTOMERS A BIT OF A CURVED BALL…’

The proof is in the driving and the MTM RS5 R is nothing if not lively, even around town where the low-end pickup is undoubtedly a bit snappier. But it is out on the open road, where you can really make full use of the enhanced throttle response, that the real fireworks happen.

Delve deep into the accelerator pedal travel and the crystal clear reply from the engine room is in a whole different league from the standard engine. The sharper throttle response is accompanied by a lunge for the horizon in each of the eight closely stacked gear ratios, and the way the rev counter needle shoots round the dial as the big hit of torque takes hold of your forward momentum instantly parks any nostalgia for the old V8 firmly in the history books. Meanwhile, the MTM exhaust adds a deeper, more mellifluous note to the V6 engine’s audible harmonic structure.

So it’s good news all round then? Well, almost. While the handling is incisive with a distinct lack of body roll and seeming endless levels of traction and grip, the lowered suspension and big wheels take the ride quality over the line to the firm side of sporty. For road use MTM normally set the ride height 35mm lower in front and 30mm lower at the rear, by using a set of KW height-adjustable lowering springs designed to work with the factory-fitted adaptive dampers. However, on the day I drove it, MTM had just finished preparing the RS5 R for a track test by a German car magazine, so it was actually set much lower and more bolted down than they would normally recommend for daily road use by a paying customer.

There will always be hard-core enthusiasts who will tick the box for KW’s fully adjustable Clubsport coilover suspension kit. That said, this has sufficient adjustment for you to dial in a fairly comfortable setting to offset the short, stiff sidewalls of the 295/25 ZR 21Michelin Pilot Super Sport tyres.

Made by Fond-metal, the 10.0J x 21-inch lightweight forged wheels that squeeze most of the daylight out of the flared wheelarches are painted red to match the stripes applied to the grey bodywork. If you think they might be too big for comfort then MTM’s 20-inch forged wheels are large enough to deliver the all-important street cred without overly shortening your spine.

In standard form the latest RS5 is a very competent all-rounder, but it lacks the sparkle that puts a big grin on your face when you benchmark it against its V8 and straight-six powered rivals from Mercedes-AMG and BMW M.

However, the MTM engine conversion really wakes up the latent potential of the bi-turbo V6, turning the RS5 into a visceral and incisive instrument of speed, underpinned by the quattro all-weather domination its rivals lack. MTM has provided the edge that turns the RS5 from a four-star car into a five-star one.

‘A BESPOKE ECU UPGRADE ADDS A FURTHER 20 HP, INCREASING THE SIZE OF THE STABLE TO 552 HORSES, WHILE STILL REMAINING WITHIN THE PERFORMANCE ENVELOPE OF THE FACTORY TURBOCHARGERS…’ 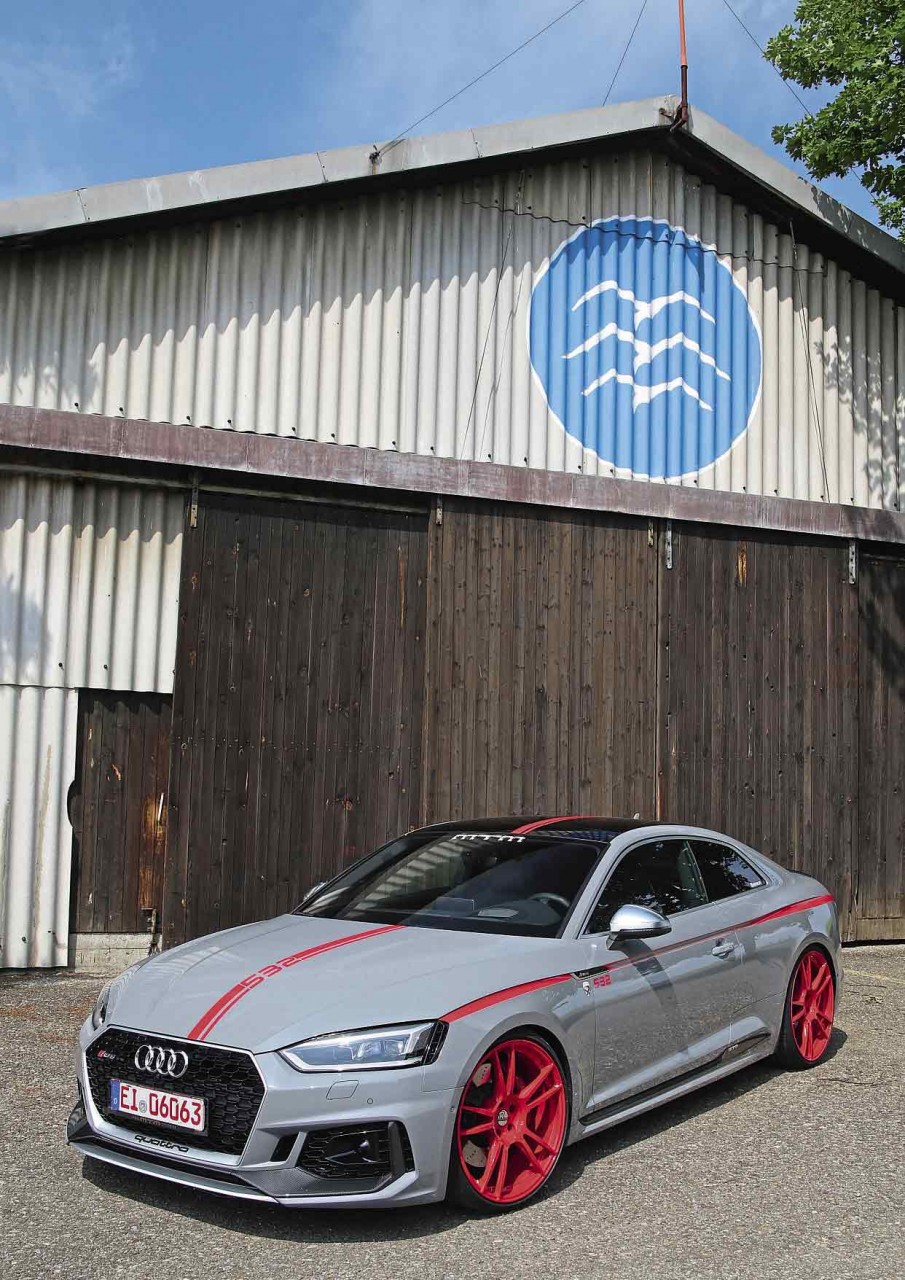 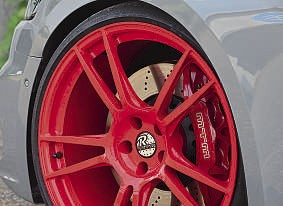 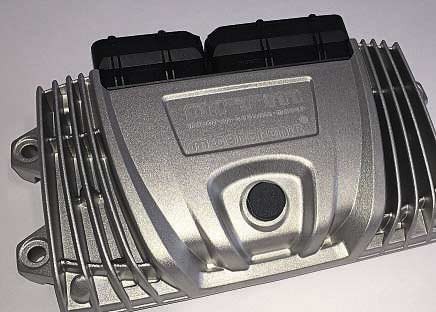 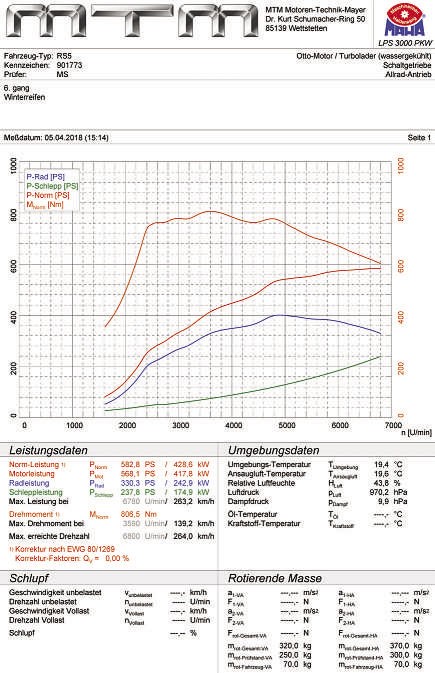 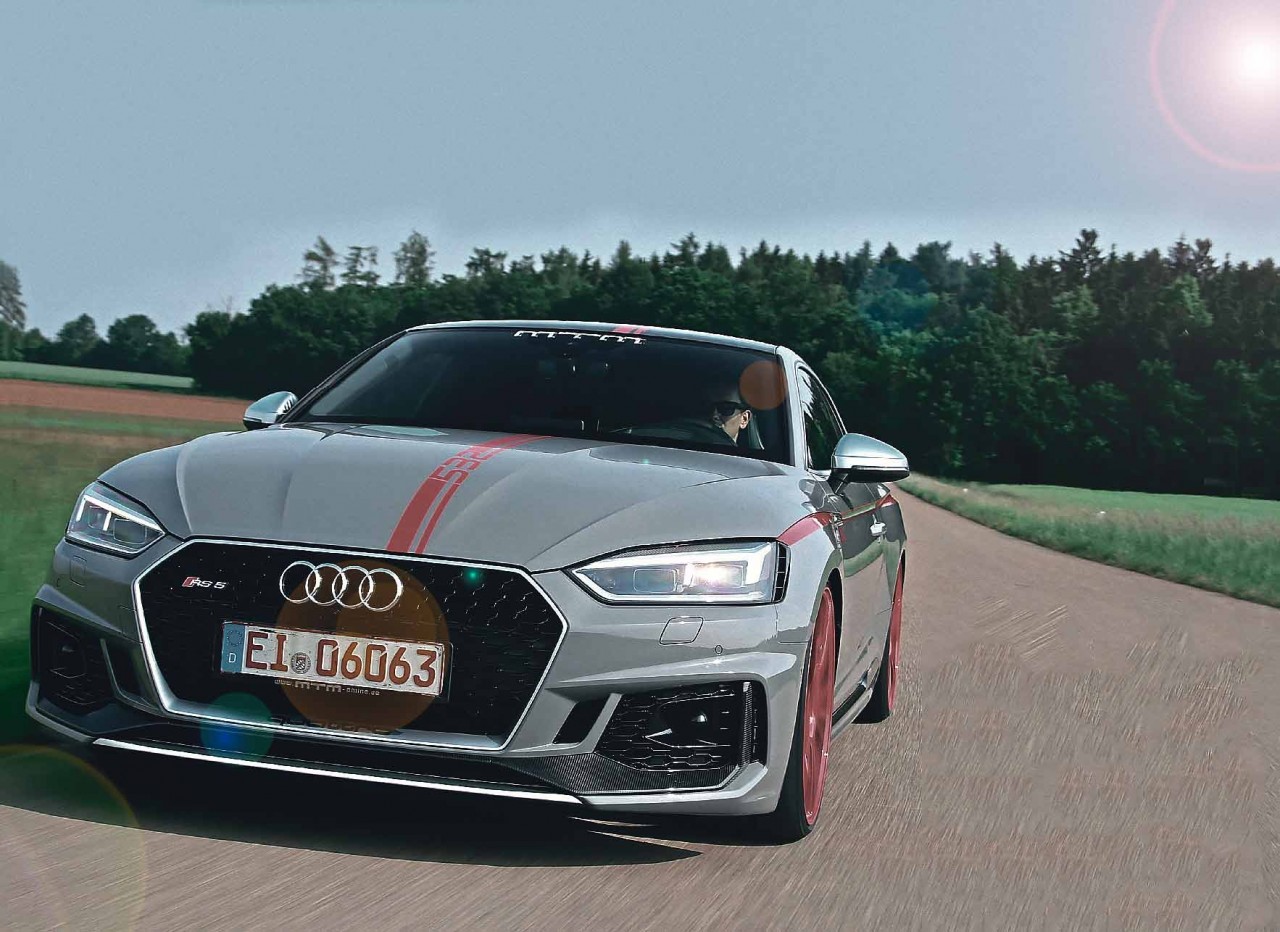 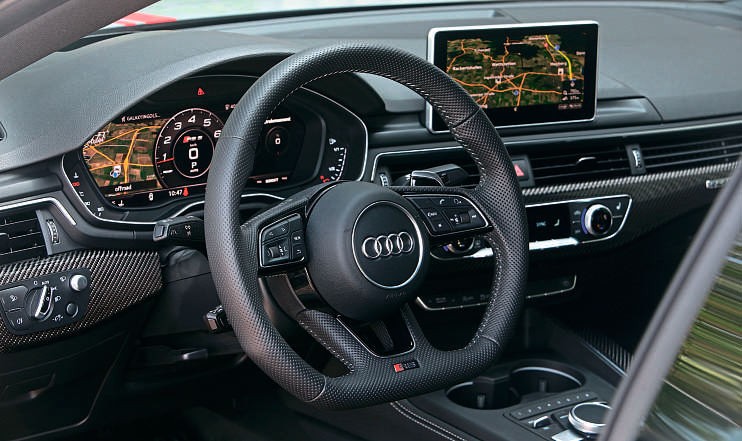 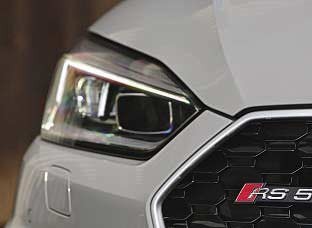 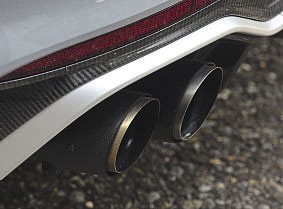 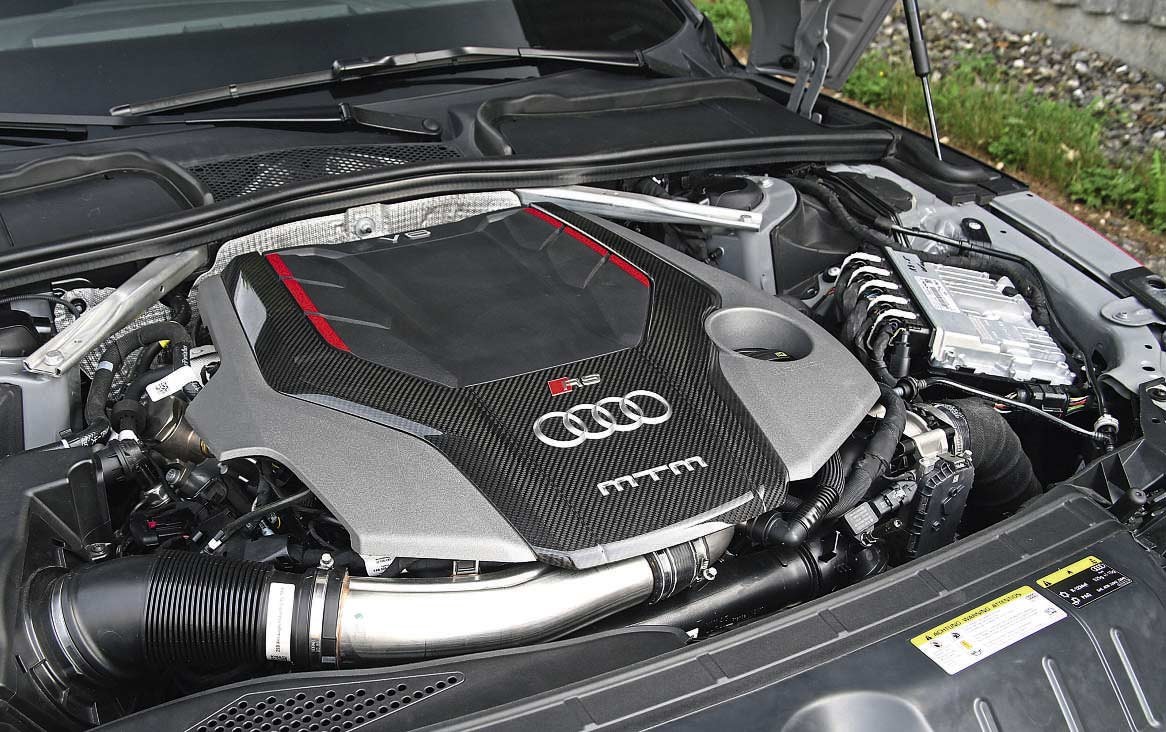 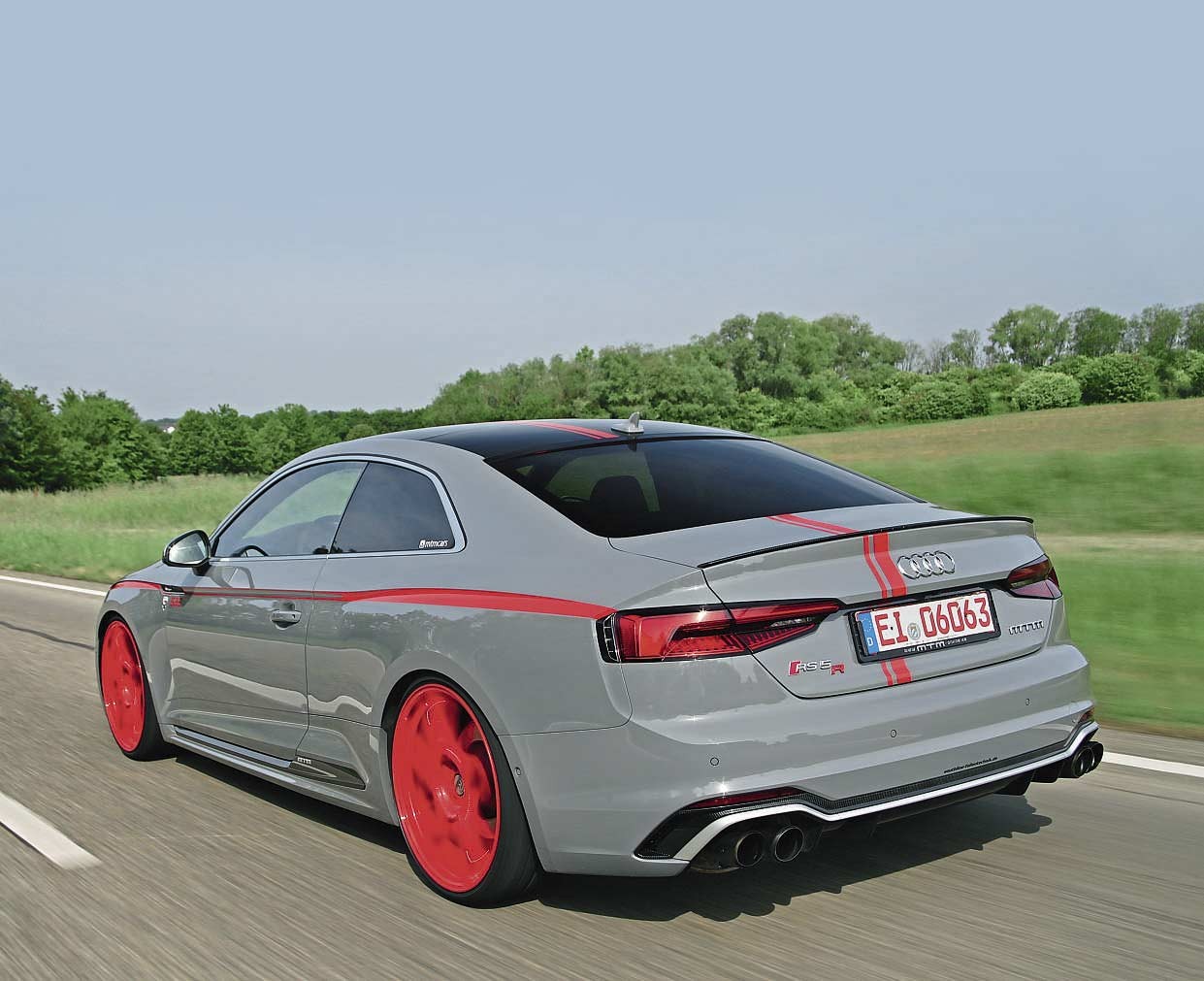 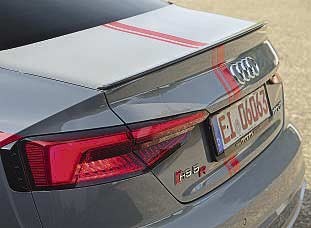 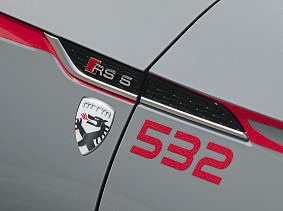 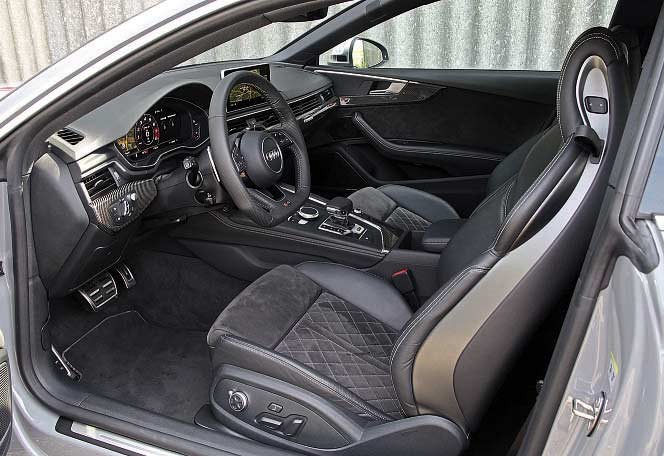 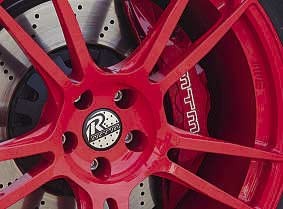 Above: MTM’s further development for the RS5 will be good for 582 hp and over 800Nm!