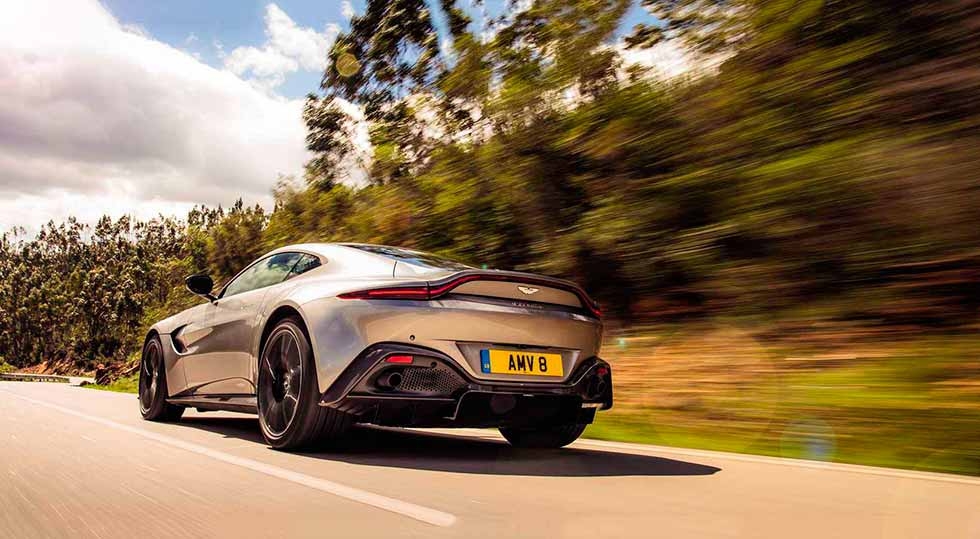 On its first appearance as the AMV8 Vantage concept at the Detroit Auto Show in 2003, Aston Martin’s Vantage promised to be the car you always promised yourself. There were many iterations, including a couple of updates and a V12 version, so expect the same for this new model. This is indubitably the first of a new age of what might be termed ‘Andy Palmer’s Awfully Big Aston Martin Adventure’.

This forceful chief executive, ex of Nissan, has formed a plausible model plan, sought and received finance for it and now is investigating the possibility of an Initial Public Offering (IPO) of shares in the company as its Kuwaiti and Italian owners seek to reduce their exposure. So, by next year your fantasy investment portfolio could include a bit of Aston Martin and Ferrari.

New Vantage shares nothing but the old one’s name. It’s based on last year’s DB11 aluminium chassis, though 274mm shorter and on a 101mm shorter wheelbase, using the 503bhp/505lb ft ‘hot turbo’ 4.0-litre V8 from Mercedes-AMG, with a ZF eight-speed torque-converter automatic in a transaxle connected by a torque tube to the front, plus an advanced GKN electronically controlled limited-slip differential. It weighs 1630kg, which is about 129kg less than the DB11, but is still heavy.

The proportions are pleasing, especially that Manx tail on an almost non-existent rear overhang, but while the details are clever (such as the hidden door window seals), some of it is plain weird. The grille isn’t immediately obvious, though that rear diffuser certainly is. While it creates an extra 50kg of downforce, it looks as if it’s escaped from another car altogether. There are also some mid-life-crisis paint colours to avoid.

Strictly a two-seater, there’s room enough for two large adults, even if there’s very little storage space around them, but there’s a decent-sized boot, with two levels, so coats and handbags can be kept separate from the twin golf bags that Aston says will fit.

The seats are well-bolstered, comfortable and cosseting, the dash is filled with buttons, some of them confusing, and there’s the DB11’s single-dial instrument binnacle in front of the driver. The steering wheel has the usual complement of switches that dial-in a sharper driveline response and harsher suspension, less traction and stability control, and increased steering weight. The centre console resembles an iPad hammered into the dash, but the sat-nav is modern, with good responses and graphics.

Out on a slimy Portimao Circuit in Portugal’s Algarve, the Vantage feels big, intimidating and a bit wayward. That electronic diff works hard to keep the car on track and so does the driver. Performance is startling, quoted as 0-62mph in 3.6sec, with a top speed of 195mph. The crackling, growling exhaust note is partly controlled by valves, and while great effort has been made to change its nature from that of the AMG GT, it still sounds Teutonic and guttural. Despite the almost flat torque curve, the V8 really lifts its head at about 5000rpm, charging all the way to the 7000rpm redline.

The steering feels light and direct, if a bit divorced, and while that improves slightly as the track dries, it never feels as talkative as the previous hydraulically assisted system. It takes time to get used to the car and its ways, but eventually you learn to unclench your teeth, relax and let it do its thing through the corners. You can feel the stability systems and the diff pushing and pulling, and in intermediate chassis settings you can squirt the tail wide and it won’t punish you as some rivals do when you gather it up late, or too early. The optional (£6000) carbon ceramic anchors are unburstable, powerful and progressive even at the end of the main straight after 20 minutes of lapping, though the Pirellis are starting to feel soapy.

On the road, you need to rev the engine and use that excellent gearbox, but it’s quick and well-mannered, with a good ride quality, though stentorian amounts of tyre noise. Again the steering feels detached and there’s slightly too much trust involved in pushing it through the turns.

All told, I like the Vantage – only not quite as much as I expected to. Of course, if you can afford to buy an Aston you can afford to run it – but if it’s a stylish, quick GT coupé you are looking for, there’s Porsche’s excellent 718 Cayman S, a base 911, or Renault’s amazing Alpine for far, far less money. But let’s remember how the last Vantage evolved. It’ll surely happen again.