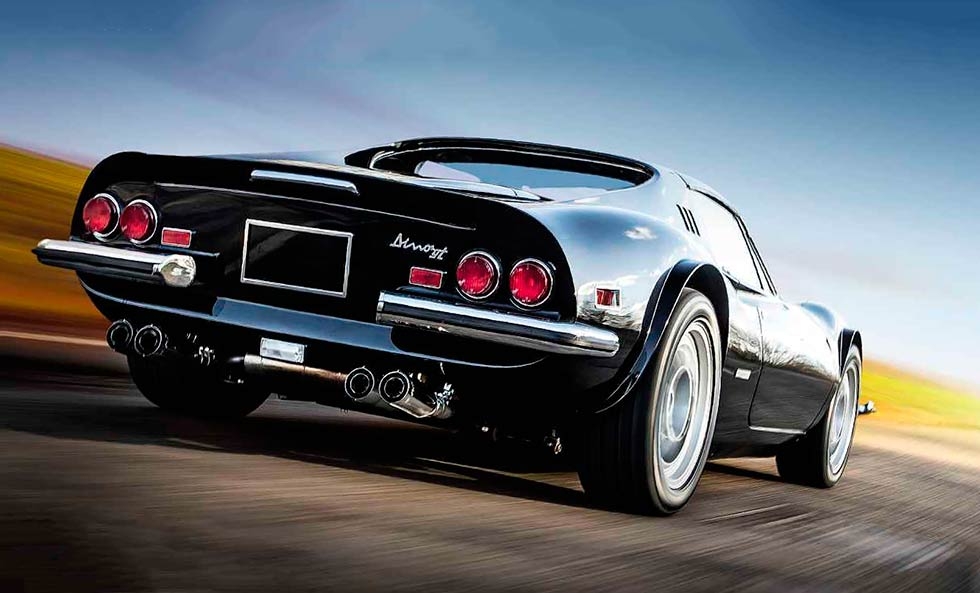 Outlaw, hot rod, resto-mod, ‘reimagined’, call them what you like, enhanced versions of older cars have been around since the days of the prewar Specials and American street rods. Tweedy types have been stuffing 4½ Litre Bentley engines into 3 Litre chassis for decades and many an Alfa, Cobra, Jaguar and Triumph has been subjected to all sorts of tasty mods. Mustang? Catalogues abound…

The marque that’s now receiving the most attention in the modifying game is Porsche, specifically the 911. The whole Outlaw genre began with Porsche 356s because many of the cars were old, rusty, worn-out and underpowered. Porsches have been rodded by the West Coast contingent in the USA since the 1950s; Rod Emory got into the game in the 1980s and is credited with coining the term ‘Outlaw’. Initially concours buffs were displeased that cars were being altered from original specification, but real drivers appreciate that classics can do with some dynamic assistance and today Rob Dickinson’s Singer Vehicle Design is well regarded for its work on ‘reimagined’ Porsche 911s.

From Richard Stewart Williams’ Astons to Henry Pearman’s Eagle E-types and the aforementioned cars by Singer, many a marque has been considered fair game for improvement… but what about Ferrari? Precious few modified Ferraris have come Drive-My’s way over the years. One reader and his wife have long raced their Group 4 Ferrari Daytona and had their roadgoing Daytona’s engine tweaked a bit. And years ago eccentric American collector Bill Harrah stuffed a Ferrari 365 GT V12 into a Jeep and called it his Jerrari – no, it doesn’t qualify for Ferrari Classiche. Old Bill also tweaked a 1971 Daytona with nine-inch rear alloys, flares and a tuned engine.

Finished in lurid burnt orange and wearing the registration plate ‘Nevada H’, it soon became known as the Harrah Hot Rod. But these are execeptions rather than the rule and 911s remain the mod of the moment, where horsepower can be wound up to 350bhp-plus and the fit and finish are dependent on your imagination. And chequebook, of course.

The original Dino 206 GT was designed by Leonardo Fioravanti at Pininfarina and is regarded as one of the best-looking Ferraris of all time. The 206 – with aluminium body and engine block – is the most collectable, while the later, heavier, steel-bodied, iron-block 246 with 2in wheelbase stretch is the faster option, thanks to its extra 32bhp.

The Dino features independent double-wishbone suspension and 50:50 weight distribution, plus disc brakes all-round and rack-and-pinion steering. And it looks fabulous, so all the ingredients are there to make a superb sports car. Apart from one: big power.

For the last four decades, Kevin O’Rourke’s Surrey-based Mototechnique has been one of Britain’s leading Ferrari specialists. Kevin, pictured below on the left, has restored, rebuilt and repaired a multitude of Ferraris, from a 250 GTO to Enzos and F40s. ‘Years ago I had a lovely Dino that won many top concours events. It was perfect but, having done all I could with it, I sold it,’ he says. ‘Dinos were not that expensive back then so I bought another, thinking I’d restore it. But instead I spent 12 years building it to my own specification. In 2015, I’d finished my first Dino V8, with a 300bhp Ferrari 328 V8 engine and five-speed ’box. ‘In our experience no Dino 2.4 ever produced more than 160 real horsepower so 300 is a significant boost and the chassis can easily handle it. We helped the chassis along by fitting a fully integrated rollcage to the open GTS and it has 360 Modena brakes. It behaves impeccably. I have taken it to Europe on skiing trips where, up and down the Alps, it has proved fuss-free… and fast!’

Kevin’s Dino V8 caught the eye of LA-based jeweller and Ferrari collector David Lee. David has all the fast Ferraris you could want but he loved what Kevin had done to the Dino, so he commissioned his own and shipped a GTS – without engine or transmission – from LA to Mototechnique and the project began.

For this car, Kevin sourced an alloy Ferrari F40 engine block (bored out to 3.6 litres from its original 2.9), a pair of 348 four-valve heads (bigger valves than the turbocharged F40’s), Ferrari throttle-body fuel injection and fly-by-wire throttle, titanium conrods and bespoke crankshaft, plus F40-type radiator and cooling fans. After 3000 hours and a whole lot of engineering thought, the turn-key result is 400bhp for this Ferrari Dino V8.

And perhaps it should be referred to as a ‘Ferrari’ Dino because it has a proper Ferrari V8 engine, no longer a V6 shared with Fiat. Incidentally, Kevin is not a fan of the term Outlaw. ‘All the body panels required are from the Ferrari factory, as are many of the mechanical components such as throttle bodies, engine block, transmission, brakes, interior fixtures and fittings – they are all original Ferrari OEM where possible. This Dino is not an Outlaw, it’s a Stealth.’ Point taken.

So, F40-based engine and cooling systems, 328 gearbox and 360 brakes, fully adjustable coilover suspension… what were the other challenges? David Lee didn’t want his open GTS to have a rollcage so Kevin and the team carefully reinforced the chassis and suspension pick-up points with box sections and seam welding. The Dino is finished in ‘chairs and flares’ configuration, so it features wheelarch lips and Daytona-style seats, with the interior beautifully trimmed by Kevin’s son Rob of O’Rourke Coachtrimmers. Another real test was the front headlights, because Lee didn’t want visible fixing points for the Perspex covers. The rear engine cover is Perspex too, framed in carbonfibre, so those gorgeous polished induction trumpets are proudly on view.

Finished in black with original-spec red-and-black interior, this Dino looks remarkably stock. Apart from the engine cover, the only other give-away outside is the larger 17-inch alloy wheels. They look like original Campagnolos, though Kevin had them specially made, and they give the Ferrari real stance without looking too modern. They add significantly to the car’s presence.

The fuel-injected V8 starts instantly and holds a rocksteady idle. It has a flat-plane crank so it doesn’t burble like a traditional V8, instead sounding hard and efficient like a racing engine. But the sound in the cabin is restrained, thanks to lashings of sound deadener. The driving position is low, with a stretch to the steering wheel, and the comfortable seats are covered in soft and aromatic leather. The improved (hydraulic) clutch action is light and linear and the 328 gearbox feels a whole lot more co-operative than the recalcitrant original.

And it’s astonishingly easy to drive. The Dino pulls away cleanly; I don’t think you could actually stall this car because of the electronic set-up. I’d expected histrionics but no, this is a bang-up-to-date example of automotive engineering in a classic design. The next surprise is the ride. It’s pliant yet the suspension keeps the Ferrari level and balanced. No thumps or crashes intrude into the civilised cockpit and the car feels taut, resilient and refined, courtesy of its cleverly dialled-in Koni coilover suspension and not-too-low-profile tyres.

But drop a gear and depress the razor-sharp throttle and that fabulously concocted V8 reacts with controlled fury. Weighing a little over 1000kg with 400 real horsepower (and 230lb ft of torque) under the lid, this Ferrari feels lithe and eager and that magnificent engine just wants to rev to its astonishing 8500rpm redline! The rack-and-pinion steering is (delicately) electrically assisted, not that you’d notice, and the brakes are overspec’d for this lightweight package. This Dino V8 is massively more refined than the original and much better put together. Of course, it’s shatteringly fast but the real surprise is its overall refinement. To demonstrate the Dino’s modern-engineering temperament, Kevin tells me to let the revs drop to 1000rpm in top gear, then to give it some throttle. Indeed, the pick-up is seamless, with no snatch or transmission shunt. This is a searingly fast yet beautifully resolved sports car that will cope easily with the cut and thrust of everyday traffic in LA, while (significantly upgraded) air-conditioning keeps the beautifully trimmed cabin ice cool. It remains one of the best-looking Ferraris ever and now offers modern-day sports car performance.

All told, this Dino is a brilliant combination of old school and high-tech. The bodyshell is small, the A-posts are slim, the car feels sharp and reactive, yet you are driving it, it’s not simply stringing you along for a fast ride. The 328 gearshift is quick and mechanical, and the brakes are powerful, yet their modulation is down to you. The V8 engine is sublime and sounds incredible. And real – there are no fake acoustics here. The handling is benign and the surprisingly refined chassis feels well able to take care of the fulsome 400bhp with ease.

So this Ferrari Dino V8 is no ‘outlaw’. It’s a pure Ferrari with all the beauty, refinement and performance that this grand marque brings to the fortunate individual in the driver’s seat.

For details see www.mototechnique.com – Mototechnique is planning a limited run of Dino V8s.

Brakes All round vented discs

‘Any Dino looks fabulous, so all the ingredients are there to make a superb sports car. Apart from one: big power’

‘ It’s shatteringly fast, of course, but the real surprise is its overall sense of refinement’

Above It’s all been retrimmed, but what you see looks period-correct – and hides modern air-con and electrically assisted steering.