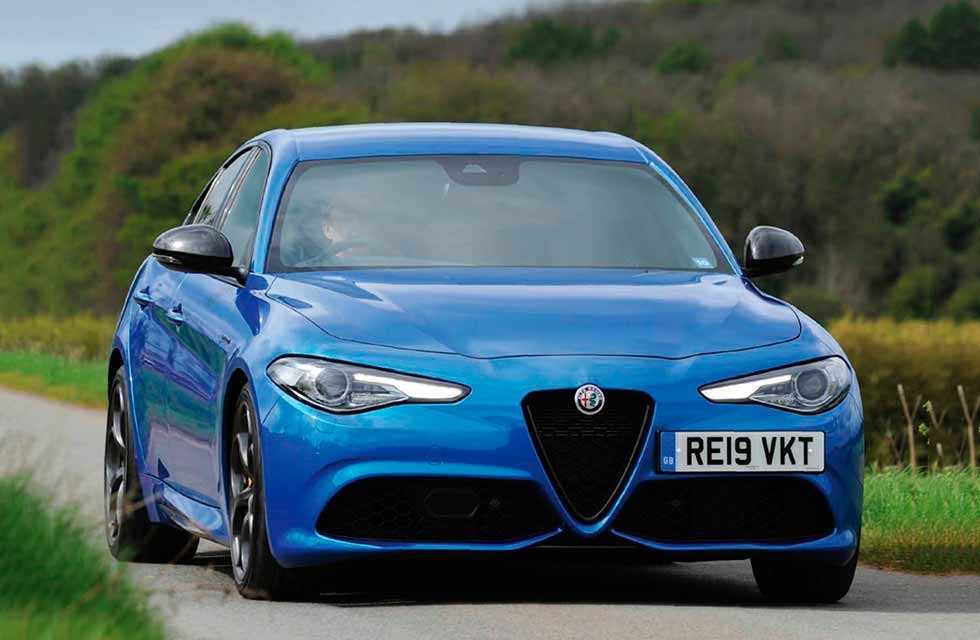 Speedy Turismo Road test of Alfa’s new Quadrifoglio lookalike. If you can’t quite stretch to a Giulia Quadrifoglio, Alfa’s new Veloce ‘Turismo Internazionale’ is the next best thing. Story by Chris Rees. Photography by Michael Ward.

Could the freshly launched 2019 Veloce Ti Type 952 be the new sweet spot in the Giulia range? Well, with its Quadrifoglio-inspired styling and carbon goodies, it most definitely looks the part. It’s based on the nicest model in the range (this side of a Quadrifoglio, anyhow): the Veloce. And of course it revives the classic ‘Turismo Internazionale’ badge, last seen on a Giulia model back in 1972 (and latterly on the 159).

So what does the Veloce Ti offer? Despite Alfa UK strongly hinting that no model in the Giulia range would ever have the same wheels as the Quadrifoglio, that’s exactly what the Ti has been given: the dark-finished 19-inch five-hole alloy wheels come straight from the Quadrifoglio. You also get a carbonfibre front grille insert, carbon mirror caps, privacy glass, bi-xenon headlamps, dark-finish badging and dark exhaust tips. That all adds to the Veloce’s distinctively large side air intakes, bigger brakes and rear diffuser. If you want to up the carbon content, you can order an optional (£1650) Carbon Pack that includes the Quadrifoglio’s carbonfibre boot lip spoiler, QV carbon-insert side skirts and a carbon gearshift insert.

Adding to the QV-alike theme, the Veloce Ti can be ordered in any Quadrifoglio paint colour, including the sensational Competizione Red and Trofeo White. Our test car was in Misano Blue, which suits the car perfectly, I reckon. Also standard are red brake callipers; the yellow ones on our test car (£450 extra) also set the blue paintwork off perfectly.

Inside, the Ti adds the same seats as the Quadrifoglio’s: leather-and-Alcantara heated items with eight-way adjustment. There’s also a smattering of extra carbon, a leather-wrapped dashboard, ambient lighting, black headlining, illuminated carbon door sills and climate control. And like all 2019 Giulias, it has split/folding 40/20/40 rear seats.

The Ti only comes with the 280hp petrol powerplant. That’s definitely no bad thing, since it’s the best engine this side of the QV’s 510hp monster lump. Once you’ve got past the cold-start grumble-rumble, the 2.0-litre turbo ‘four’ emerges as a fantastic powerplant. The redline may be set at a lowly 5500rpm but the engine has such effortless mid-range pull that you don’t often need to rev it hard (peak torque of 400Nm (295lb ft) is delivered at a mere 2250rpm). But it’d be shame not to extend the engine on occasion, as it’s super-sweet and sings superbly, especially in Dynamic mode. For the record, the 0-62mph sprint takes 5.7 seconds.

Handling? Grip from the 225/45 front and 255/40 rear rubber is excellent, helped by very direct, precise steering. Push too hard and ultimately the front end starts to squeal and you get a smidge of understeer. There’s very little body roll to speak of, inspiring plenty of confidence to push on. The optional Performance Pack (£1950) includes limited-slip differential and ‘synaptic active’ dampers that stiffen up when switch the DNA mode dial to Dynamic. Personally I’d like to see that fitted as standard at this level. As for the ride, it’s firm but only ever unpleasant over speed humps.

As with all UK Giulias, the Ti comes with eight-speed semi-automatic only. Luckily the ’box matches the 280hp engine very well, even if I find myself using the chunky milled aluminium manual paddle shifters most of the time.

The Ti forms part of a refreshed Giulia range for 2019, in which all models now have an 8.8-inch touchscreen with navigation, Apple CarPlay and Android Auto. The Veloce Ti is priced at £46,005 which is definitely on the steep side – some £6315 more than the regular Veloce (which just ducks under £40k). On the other hand, it’s still over £17,500 cheaper than the QV (currently retailing at £63,540). OK, you don’t get that sublime 510hp V6 engine but you do get arguably the best look of any Giulia model, while the real world performance from the 280hp engine will be plenty enough for most people. Add in Alfa’s current five-year warranty/three-year servicing package, and the Giulia Veloce Ti is looking terribly tempting. Sweet spot? Sugar overload, more like.

BRAKES: Vented discs all round