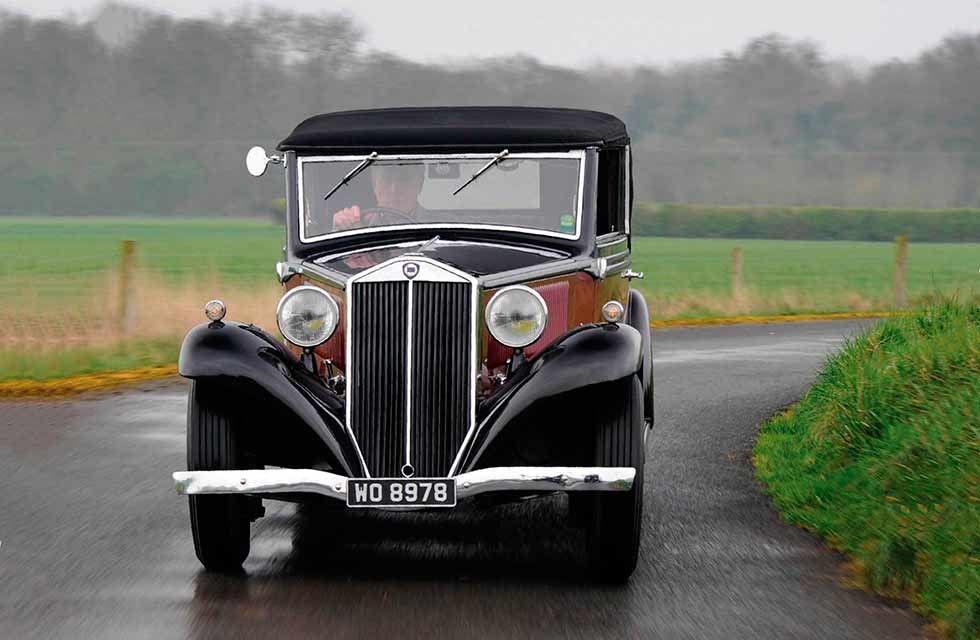 Good Enough For Tazio This elegant Pinin Farina drophead appealed to racing car drivers like Tazio Nuvolari when it came to road wheels. Here’s why. Story by Simon Park. Photography by Michael Ward.

As silent as a good butler, as smooth-running as a well-ordered household. Thus did London Lancia distributors Kevill-Davies & March proclaim the virtues of the first ‘small’ Lancia, the Augusta, some 85 years ago. Said virtues might not have quite the same resonance or relevance today, but back in the 1930s that was obviously considered a killer sales pitch.

Unfortunately, such accolades weren’t enough to counteract the problem of price, which was not far off double that of rival models such as Fiat’s Balilla – and that was just for the common-or-garden saloon. It was the price of engineering excellence that few of its rivals could match, but which, ultimately, too few potential punters were prepared to pay – an all too familiar Lancia trope.

So Vincenzo Lancia’s determination that his new ‘baby’ should lack none of the sophistication and amenities found on the larger DiLambda, Astura and Artena models was, ultimately, its undoing. In the mid-1930s, your average man in the Italian street neither needed nor expected sliding pillar independent front suspension, unitary monocoque construction, ultra-compact overhead-cam V4 engine, Lockheed hydraulic brakes and the exceptional structural rigidity assured by electric welding techniques (this was the first European car to so benefit), all of which came at a price.

Conversely, it was just such features which endeared the Augusta to the likes of Tazio Nuvolari and several of his racing chums – far from average men – who were quite happy to park their 200hp-plus supercharged, eight-pot Alfa or Maserati at the end of a hard day’s racing and potter home in a 35hp Lancia. As skilled, professional drivers they were well aware that the ability to travel quickly across country was born of more than just sheer horsepower. And like so many other Lancias, both before and since, the Augusta had those qualities in spades.

Around 14,000 Augustas in all were built between 1933 and 1938, along with over 3000 separate chassis for independent coachbuilders’ creations. However, although designed by Carrozzeria Pinin Farina, this 1934 second-series Augusta was actually built by the Lancia factory and is something of a rarity.

“There are not many of them left,” says owner Doug Martin. “There are still quite a few coachbuilt ones but there don’t seem to be many factory ones that survived.” In fact, it’s one of maybe three such cabriolets in the UK. A retired accountant with an eclectic taste in toys, Doug has owned it for about five years. It’s his first Lancia, following an interestingly varied selection of classic and racing cars.

“My midlife crisis was an Elva 200 race car,” he recalls. “I bought it when I was 50, rebuilt it fully and raced it for a while.” Then came an Alfa Giulia Spider with which he also competed, winning the Giulietta Cup at Alfa’s centenary celebration event at Monza in 2010. Two pre-war machines followed, a Lagonda Rapier and a 1922 Fiat 501S, in which he did the Mille Miglia.

Now, the Augusta shares a garage with a more recent Fiat, an immaculate (thanks to 23 years spent in the south of France) 2300 Coupe, as well as two quirky but cute American machines. The 1937 Hillegass and 1928 Dreyer are tiny, no-nonsense Fordbased single seaters built for ‘sprint’ racing on dirt ovals which Doug, clearly something of a racing junkie, uses for hillclimbs and VSCC events.

So how did he come to own a rare, and comparatively staid, vintage Lancia? “I don’t know really. I’ve never been a Lancia person, but I saw this one advertised and just fell in love with it – the shape was right. We’ve done three [VSCC] Measham Rallies in it, and she’s a class-winner at the Welsh Rally – she’s very useable, even in the winter. The hood’s all spring-loaded, just pops up straight away; wind-up windows.

She’s as good as a vintage saloon, yet she’s a full four-seater summer tourer.”

Obviously a very capable and hands-on engineer, Doug likes to work on his cars and the Lancia is no exception. “It was a bit sad when I bought it,” he told me. “It was all this burgundy colour, which just looked very plain. None of the instruments worked, and it had no oil pressure. We couldn’t understand it because it ran beautifully! I took the engine to pieces, got the oil pump rebuilt, put it all back together – exactly the same, no oil pressure.” This conundrum was eventually solved by distinguished Wrexham-based Lancista (and fellow Augusta owner) Morris Parry, who correctly diagnosed a missing 14mm O-ring twixt block and crankcase… Welcome to Planet Lancia!

Anyway, the Augusta is far from sad now. Sound in wind and limb, she’s smart but not too smart, retaining enough patina to remind you that she’s really quite an old lady – but a truly elegant one, from every angle. Farina got the proportions exactly right (well, when did he not?) and the cabriolet shares that Tardis-like characteristic of so many pre-war cars – an interior spaciousness, especially in the back, seemingly quite at odds with its external dimensions.

So everything augured well for a gentle drive through some very pleasant Herefordshire countryside, and so it proved to be. Up front, things are pretty much where and what you’d expect them to be. The driving position is good, although with the adjustable seat set for optimum ‘reach’ to wheel and pedals the starter button was a bit of a stretch – but then it is on the floor, close to the bulkhead. All the important gauges are present and (presumably) correct, with ammeter and water temperature gauges in an after-market panel below the dash.

How many times have you read about a ‘gangly gear lever’? Well, here’s another – but it works much better than you’d expect. Despite longish throws around the conventional four-speed ‘H’, I only missed a few. A double de-clutch is necessary on down-changes, less so going up. The pedals are the ‘right’ way round (always worth checking in a pre-war car, that) and are entirely quirk-free. The brakes do initially feel a bit dead but work well when you need them to. And it’s probably no coincidence that both Augustas I’ve tested for this august organ (the other being a saloon) have had their original-equipment Zenith carburettors replaced – the saloon’s by an SU, whilst Doug’s car now sports a period Weber 30DO which, he avers, “improves the performance quite considerably”.

And as long as your expectations are realistic, you’ll not be disappointed on that score. We may well have held up an in-a-hurry TIR super-tanker for a while on our drive, and traffic-light Grands Prix are best avoided, but with that familiar V4 ‘thrum’ your constant companion, the little 1196cc lump is a doughty worker, possessed of surprising flexibility and admirably smooth power delivery. There isn’t a huge amount to deliver, of course, even with the Weber carb (which presumably boosts the standard-issue 35bhp a tad); but it’s sufficient to keep the little cabriolet cruising at a perfectly respectable rate of knots.

While it is doing so, you are experiencing a surprisingly ‘modern’ ride. Even with the open coachwork, that exceptional structural stiffness is evident whilst the (unmistakeably) sliding-pillar- sprung front end and the ‘live-and-leaf’ rear between them provide a pleasing degree of compliance. In typical vintage style, there’s very little roll, but neither is it noticeably stiff. The steering is very direct, with no free play on the wheel. At parking speeds, it’s like any other 85-year old car – bloody hard work; but on the go it’s all you could ask for in terms of finesse and feedback.

And it guides the front end, on its Michelin X taxi tyres, into corners with pleasing precision.

And when the weather gods decided to vent their collective spleen – or rather, their bladder – on us towards the end of our drive, we were able to put Doug’s assertion about the Lancia’s year-round suitability to the test. With the windows wound up and the tight-fitting hood in place (a quick, easy job) the cabriolet was transformed into a very cosy saloon, così così…

Pre-war motoring is a whole different world. You expect less, but get much, much more. It sharpens up your visual and aural receptors, fine-tunes your inputs and retunes your psyche. Suddenly, the world becomes a less frenetic place where, for a while, smartphones and tablets (not to mention squabbling politicians and Brexit) seem somehow much less important and demanding of your attention. And these days, that’s worth even more than a good butler and a well-ordered household. Viva Lancia!