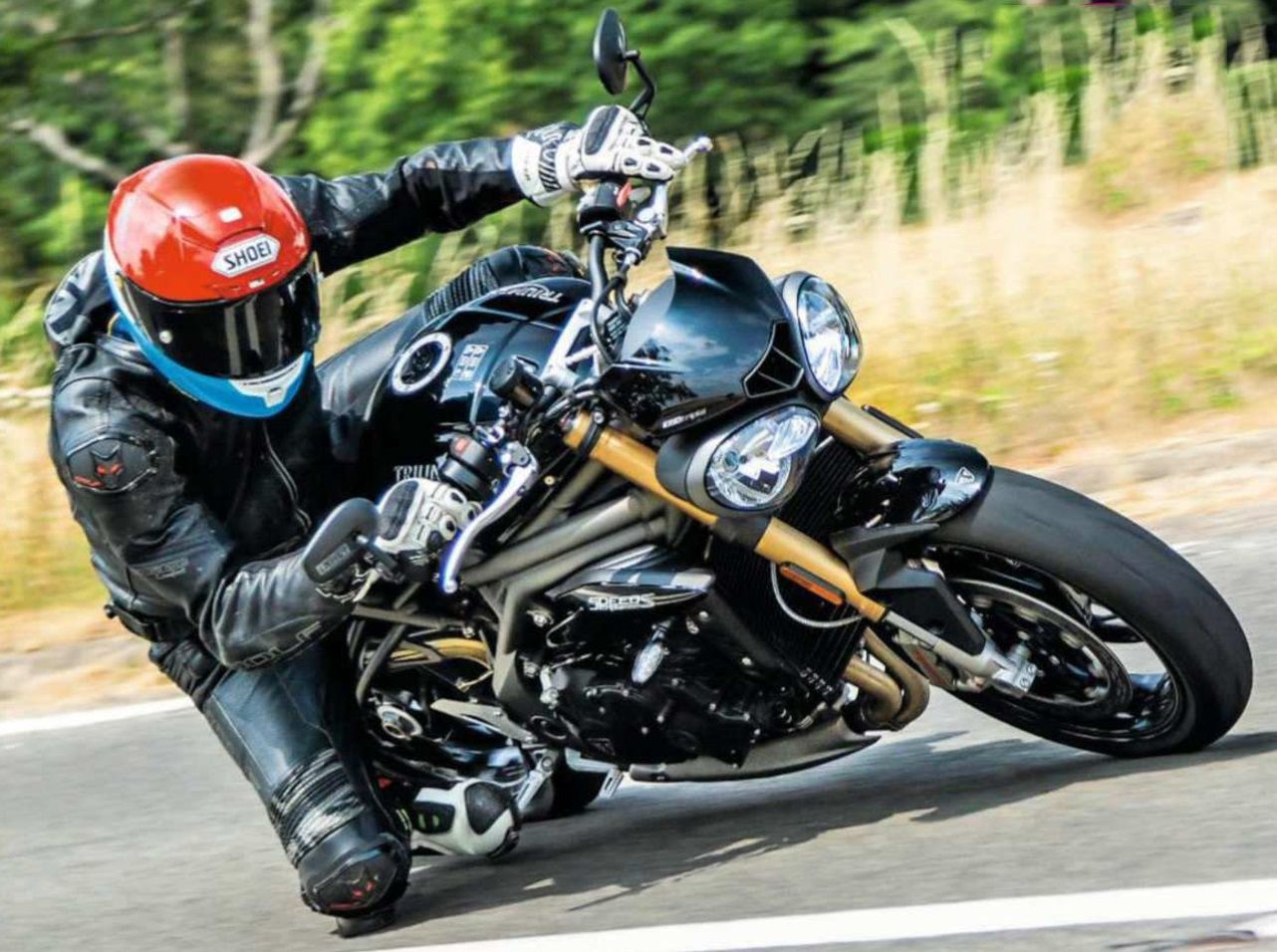 The Speed Triple RS is the best naked Triumph have built. But it’s also the most expensive. The S model is £1900 cheaper, but with less tech. So, is it worth the saving or a cut too far? 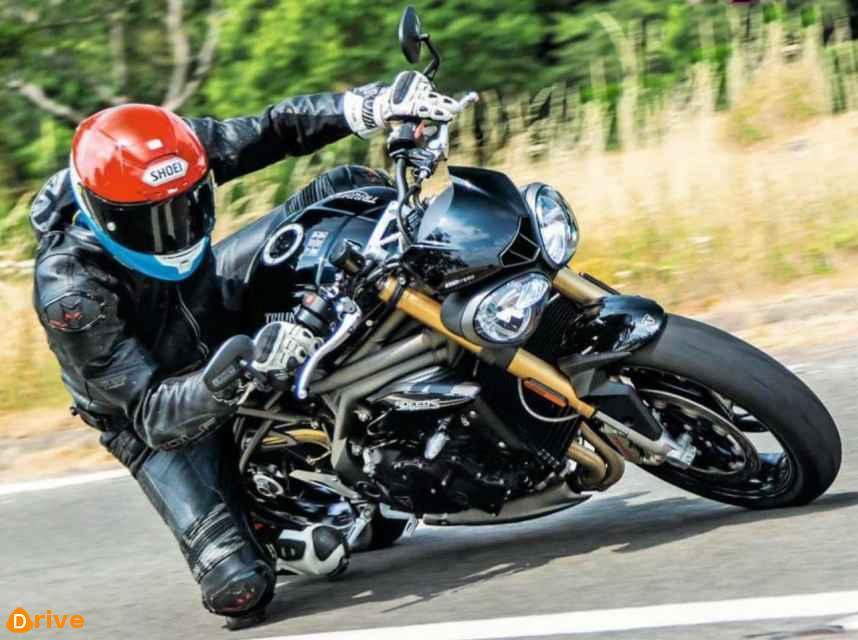 THE SPEED TRIPLE got very seriouswhen they introduced the R model in2012: what was a good road-going supernaked stepped up its game to become a surprisingly effective track tool. Ohlins suspension, Brembo brakes and Supercorsas as standard (and later proper electronics) turned a grunty roadster into the bike coming around the outside on a trackday.

The 2018 RS model is even more potent: with cornering ABS, over 140bhp at the rear wheel, and IMU-based electronics, it looks set to continue being second only on circuit to Aprilia’s Tuono: little more than an upright superbike. Not bad for a bike that’s visibly and technically a direct descendant of the 1997 T595 Daytona. The price you pay for this potency is ?13,250. That’s a lot of money, even though you get the spec list to match. But if you can’t stretch that far in the first place, the relative value for money is irrelevant.

The Speed Triple S is ?1900 more affordable: to cut the cost you get Showa suspension instead of Ohlins, no carbon bits or Arrow titanium cans as standard, the master cylinder is fixed ratio and the traction control/throttle response within the riding modes doesn’t have the least intrusive track settings to call on. But you get the same motor, TFT dash, Brembo calipers, and so on. The S doesn’t instantly look cheap by comparison. You get the same view from the seat anyway – tapered alloy handlebars, TFT dash with various display options, chunky-knobbly switchgear.

It makes the same noise, too: the RS’s Arrow cans are fully homologated and add more to the visual than aural package. The important bit – the motor – is the same, too. In fact, this one actually made more power than the RS when they were slung on a dyno back to back.We’ll put that down to production differences: bank on just north of 140bhp at the tyre from either. An impromptudrag racewith anold-spec SpeedTriple R fromsome traffic lights reveals the 13bhp extra at peak is backedwith significantlymore shove right fromthe get go. It’s amuch better lump.

This year’s revisions increased the rev range, too. On track at the launch, Johnny found that being able to hang on to a gearmade it easier and faster through a sequence of bendswhere shifting back and forthwould have been easier before, and the extra power up top and torque everywhere got himalong straights noticeably quicker. On the road, it addresses one of my criticisms of the old one, which I never really gelled with. I always felt the midrange-rich, short-revvingmotor made it feel more like a stripped sports tourer than an aggressive supernaked. 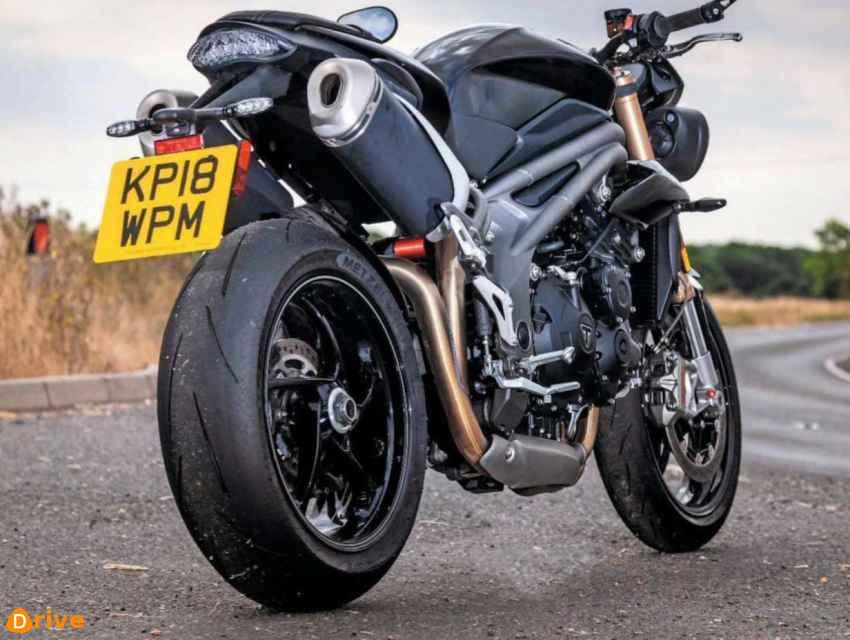 It’s still smoother andmore refined than the twin and four-cylinder opposition, but that harder, longer tug (as it were) adds attitude and grin factor. If you’ve selected the ‘User’ ride mode in order for awheelie or three, it’s also easier to pick up andmaintain such stupidity without butting into the limiter. The riding modes are one area you lose out to the RS – there’s no Track mode, and the traction control and ABS aren’t lean angle-sensitive. But one benefit to such a long, gradual evolution from a 1990s design, is that it doesn’t feel like it needs traction control.

It’s not aggressive or instant – just pokey, and on hot grippy roads it never gets squirrely in theway overtlydigital superbikes and nakeds can: the TC feels like it’s an add-on rather than critical to the complete package. It’s good enough for shitty conditions, so on the road at least it’s no sacrifice. The Showa suspension is pretty good, too, though it took a bit of adjustment to be happy with it. It’s very sensitive to adjustment, and I went back and forth finding a balanced medium.

So… don’t bother with the RS?

Whoa, easy. The Speed Triple S is better than the old bike, but the RS has an elevated position and attitude compared to any previous Swede Nipple. The old Speed Triple S was so close to the R model, even in suspension settings, it was barely worth buying for practical reasons. The Speed Triple S has improved a notable amount, but morphing the R into the RS has distanced the two models properly for the first time. With a simple distraction-style key theft, Whitey appropriated Austin’s RS long-termer, and we spent an afternoon swapping back and forth.

The difference is immediately apparent. The suspension doesn’t feel radically different in terms of rate of turn and support, but the feedback and stability is markedly better through the Ohlins gear – for fast riding, there’s no contest. Saying that, it’s still not night and day better – the quickshifter/blipper is optional on both bikes (it costs ?310 plus fitting), although fitted to our RS, so while we noticed it on the day, it’s not a deciding factor.

It does make the ride faster and slicker for either model – Triumph’s 955/1050 gearboxeswere notoriously clunky for years, and while the latest version is stronger and easier to use, it stillwon’t be hurried without the electronic assist. The Arrow cansdon’tmake a noticeable difference to noise, as bothmodels are built to meet the same regs. Oddly, the brakes are better on the Speed Triple S. The calipers, discs and pads are the same, but the S has a non-adjustable radialmaster cylinder, and the RCS has a flash variable ratio MCS part.

We triedall of the options (effective 19, 20 or 21mmbore size), and it changed the feel but didn’t make much progress towards matching the sharper, more direct feel of the S. Although that might be our fault… we’re a bit ahead of ourselves with completed Rutter tests, and this pair had been on track before we road tested them (hence the Metzelers, instead of the similar OE Supercorsa SPs). We suspect the RS had glazed pads, so we’re looking into that. In any case, the lack of a click-wheel doesn’t harm the stoppers.

The keyless ignition on the RS is pretty annoying, though – it doesn’t operate the fuel cap, and it’s finickywhen you’re trying to turn the bike (or steering lock) on and off. But the ?1900difference is feltmore than ever before, and the carbon bits and general flashier feel should be enoughto justify it to thosewho can stretch to theRS. If you can’t, the regularmodel isn’t lacking as such: it just isn’t as good as something that’s better. Andwe only charge four-and-abit quid for such insight…