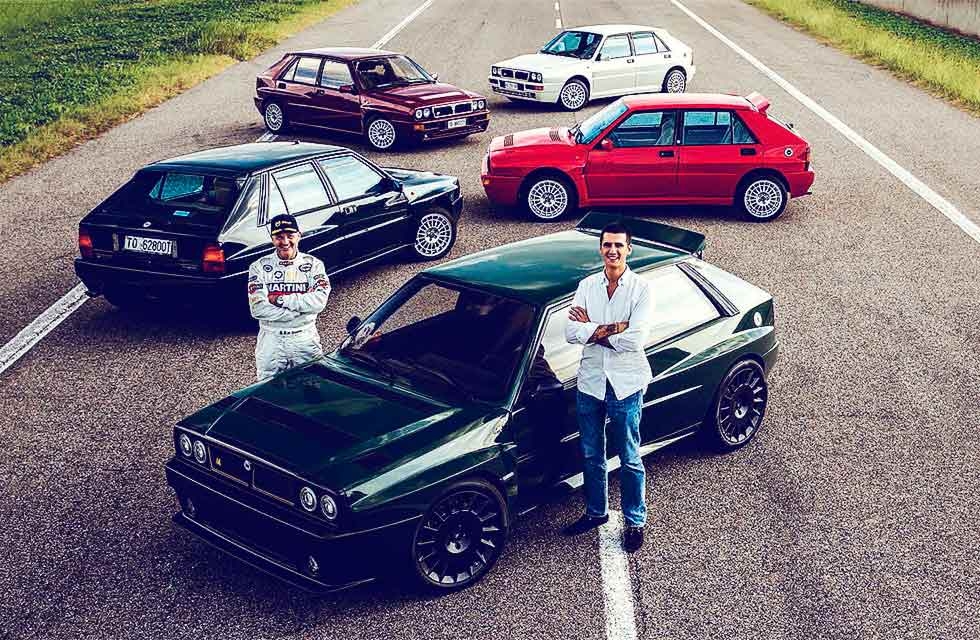 Daze of future past. Radical, controversial, unique: Eugenio Amos’s ‘restomod’ Lancia integrale Futurista has two doors, loads of carbonfibre and a major mechanical reinvention. Is this a vision of a future that Lancia should have had? Story by Ruoteclassiche/Alberto Amedeo Isidoro. Photography by Ruoteclassiche/Marco Zamponi.

It looks like something out of a car video game. Guaranteed to cause controversy among purists and the Lancisti faithful, Eugenio Amos’s bold vision of a modernised Lancia Delta integrale has a discernable Lancia shape, but it’s clearly radically different. Aren’t those LED headlights? Something about the nose reminds us of a Beta Montecarlo. And, er, what’s happened to the rear doors?

This car is the clear and unapologetic vision of Eugenio Amos, an Italian racing driver, car collector and founder of Automobili Amos. So what exactly are we looking at here? It’s called the ‘integrale Futurista’ and, as its name suggests, it’s part of the modern phenomenon called restomodding. Amos explains his view of the restomod phenomenon: “It is a non-conservative restoration. Although sticking to the cultural elements of the original project, it aims to bring it up to current standards.” Many of the original components are therefore thrown away, replaced by newly manufactured items that represent the best in modern materials and technology. In the Futurista’s case, there are over 1000 all-new parts in the car, from the engine to the bodywork.

Of course, the idea isn’t new. Plenty of other companies have made restomod waves, including Ruf in Germany and Singer in California, both with air-cooled Porsche 911s. They have enjoyed great success as small companies applying new trends to classic cars. To some people, restomodding is sacrilegious. To others, it’s a fascinating phenomenon and a way to enjoy classic cars in a completely new way.

In the case of the Futurista, it must be pointed out that one of the ideas behind the project was to raise from near-death a brand – Lancia – that has lived on its memories for too long. No question, though, it’s far from easy to convince a driver raised on Lambdas and Aurelias that the Futurista is a worthy effort. But hey – it really wasn’t designed to appeal this sort of Lancia enthusiast, as Amos explains: “When I decided to bring my creature to life three years ago, I clearly had my target customer in mind. My potential clients already have two or three Delta integrales in their garage and are ready to move forward, without fearing the past.”

So the people Automobili Amos is targeting are Millennials, young people born between the early 1980s and 2000, who are already in love with the Delta. Millennials mainly communicate through social networks, Instagram above all, and Amos says he’s used Instagram a lot to promote his efforts in the marketplace.

Even Amos is aware, though, that some things are sacred: “I would never revamp a Delta Evo I or Evo II. The Evoluzione models are rare and must be preserved.” For that reason, his own Futursta restomod is based on a Delta HF integrale 16-valve.

The shape has been significantly reworked. Responsible for the redesign work is Carlo Borromeo, a pupil of both Walter de Silva (at Seat) and Giorgetto Giugiaro (at Italdesign). Easily the biggest change is the removal of the rear doors, turning the Delta into a two-door car – although the front doors haven’t been extended. This was no simple weld-up job, though. The wheelbase has been lengthened by 20mm compared to the standard integrale (at 2480mm) and the rear wheelarches were reshaped by hand and welded to the door structure. Together with a roll bar and extra strengthening members, the torsional stiffness of the body/chassis has been increased dramatically.

Much of the steel bodywork has been replaced with hand-beaten aluminium, but there’s a lot of carbonfibre in this car, too: most of the front end is made out of it and more carbon panels at the rear help reduce overall weight by 90kg versus the donor car. A large band in raw carbonfibre and new LED headlights make the front end look dramatically different. The bonnet is also in carbon, reshaped so that when it rises, it takes part of the front wings with it. Carbon is again the material used for the valances, bumpers, rear spoiler and the panel in which the lights are set.

While the rear suspension is pretty much the same as on the standard car, the original MacPherson strut front end has been replaced by wishbones. The intention was to improve turn-in and front-end grip, and to promote oversteer rather than understeer. Electronic dampers allow you to change the damping calibration, too. New 18-inch alloy wheels are to a completely new and original design, with spokes that direct the air flow to the outer edge of the wheels.

The engine has been significantly reworked to increase power from 196hp to around 330hp. The con rods and pistons are modified, the electronics are new, and there’s uprated fuel injection and Magneti Marelli electronic ignition. By using a new intercooler and more sophisticated wastegate valve control, there’s significantly less turbo lag. Other under-bonnet changes include a custom air intake, new exhaust and uprated cooling.

The interior is retrimmed in its entirety, with smatterings of carbonfibre (for instance, the transmission tunnel). Recaro front seats and Alcantara upholstery give it a superb vibe. The switchgear is modern but retains the look of the original car, while the custom steering wheel has integrated controls.

Eugenio’s own fleet of cars are almost all painted dark green (including, famously, his Ferrari F40). So when it came to tackling his vision of a Delta integrale, naturally it had to be green, too – specifically, Verde Brinzio. We asked Eugenio if we could assist in the christening of his new beast by inviting Lancia integrale race veteran, Miki Biasion, along – yes, the man who won the World Rally Championship in 1988 and 1989 in Deltas. We meet up on the Vairano circuit with the intention of giving the new Delta a full-beans track test.

Biasion and Amos quickly make their acquaintance. Although they’ve never met before, they’re already joking with each other, and clearly an instant bond has formed between them. They climb aboard the Futurista, Miki sliding himself behind the steering wheel, Eugenio next to him as passenger. Starting the car is a real rite: there’s a red button with the symbol of a space rocket on it, which you need to press three times in a precise sequence. Firing it up isn’t proving straightforward, even for a world champion.

Idling at tickover, the Delta Futurista pants and hiccups. The reason is simple: “It is still in prototype form, 95% developed so far,” explains Luca Ciancetti, the engineer who founded Podium Advanced Technologies and coordinated the Futurista project.

“We still need to do some final fine-tuning of the engine control systems.”

Pushing the lever of the reinforced 16-valve integrale five-speed gearbox into first and releasing the clutch, anxiety disappears and everybody relaxes. The sight of the car speeding off and disappearing into the tunnel that leads to the handling section of the track is fantastic.

Soon, Biasion and Amos return from their handling test. “I was particularly impressed by the work done on the suspension,” says Biasion. “The feedback is much better and the body/chassis feels more rigid.”

We have invited along for comparison a Delta integrale owned by Lorenzo Candian, if only because of its colour. It’s an Evo I in Verde York paint, a little darker than the Futurista’s. “I concede,” says Amos, “that I love that colour even more than the Verde Brinzio I have chosen for my car.” Biasion cannot resist being madly drawn to the Deltona. After some hesitation, Lorenzo hands the keys of his Evo I over to Miki. “Nobody has ever driven it before today except me, but how could I refuse Miki?” he smiles. Eugenio, meanwhile, gets behind the wheel of the Futurista. The pairing in front of us looks astonishing: integrales of the past and the future challenging each other on the track. Original or modified – which would you take? The two cars there together, it’s hard for is to make a decision. By the end of the day, after the cars leave for their respective homes (the Futurista to Pont-Saint-Martin, the small village in the Valle d’Aosta where the Futurista was built), it is time for us to reach our conclusions. We’ve truly enjoyed the Lancia Delta Futurista, because it’s made us look at the Delta afresh; at the very least, we can admire the courage it’s taken to make the transformation.

In his book, The Solitude of the Global Citizen, Zygmunt Bauman says how most people believe they can’t do much to change the way things are in our world. Eugenio Amos clearly isn’t one of those people, though: “Cars are not mere vehicles to take you from point A to B. Cars exist to move you, to fire your imagination, to give you feeling.”

Some 20 Futuristas are set to be manufactured over the next two years, priced at £270,000 each. They are all already sold, many to buyers abroad. Interestingly, Amos has decided not to number his cars individually, but to give each one a name. So each car will have its own soul, it seems.

ABOVE: Miki Biasion and Eugenio Amos are now firm friends. RIGHT: Engine is turned up to 330hp. BELOW: Two-door shell adds strength.

Futurista has a slightly longer wheelbase and big suspension mods. It handles better than the integrale Evo I seen here.