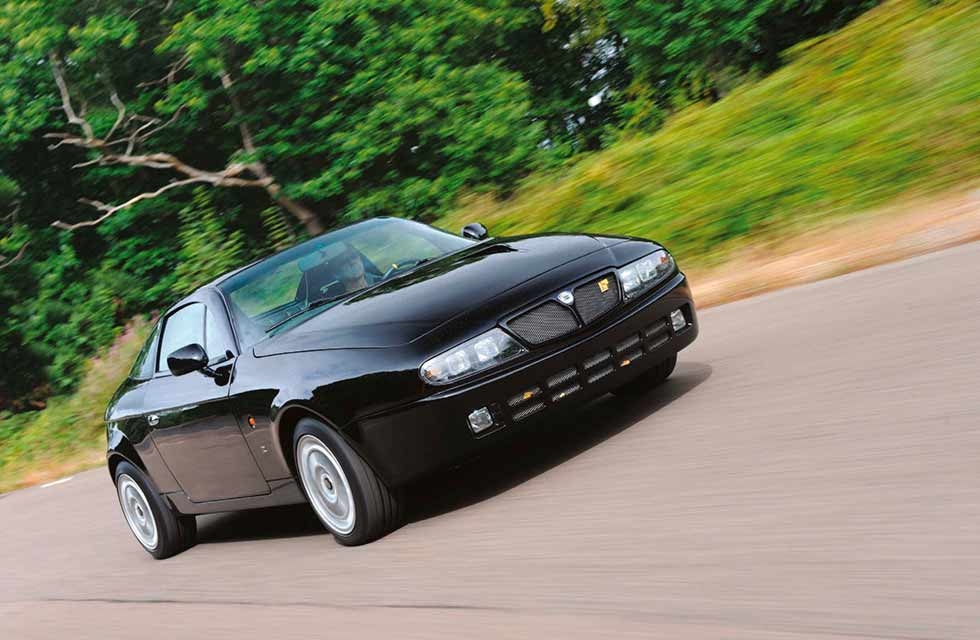 Laughing Lancia Zagato’s Hyena is so much more than a mere rebodied Lancia Delta integrale. It’s got carbon cool, a sharpened-up drive and extreme rarity in its armoury. So is this the ultimate integrale? Time to find out… Story by Chris Rees. Photography by Michael Ward.

1992 Zagato Lancia Hyena Is this the ultimate integrale?

According to my zoology textbook, hyenas are known for their short, strong, ready-topounce hind legs. I’m feeling it, I must admit, as I approach Zagato’s eponymous Hyena; my own legs are coming over a little weak. As I get closer still, I find myself, like a hyena, laughing out loud. After all, what I have parked before me is one of my all-time dream cars. It really has got it all. The underpinnings of a Lancia Delta integrale Evo. A design penned by one of my all-time favourite styling houses – Zagato. A cabin that combines carbonfibreclad focus with bespoke luxury. And extreme rarity: just 24 Hyenas were made in the early 1990s.

That rarity is, perhaps, the Zagato Hyena’s greatest tragedy. It should have been so much more popular. The original intention was to make 75 examples, and there was even a plan to engineer it as a regular Lancia production model (see separate panel). The tragically low total tally of 24 Hyenas was, inevitably, all down to politics.

The story starts with a Dutch car enthusiast called Paul Koot, who had set up a business that became the official Lancia service centre for the Netherlands, called Lusso Service Holland. In 1990, Koot was on a visit to a restoration company in Italy and, by coincidence, the coachbuilder Elio Zagato happened to be visiting too. The following day, Paul was invited to Zagato’s works, where he met Elio’s son, Andrea. Paul said what a shame it was that Zagato lacked a 1990s coachbuilt Lancia coupe, in the same vein as Zagato’s Alfa Romeo SZ that had recently been launched.

“Well, actually we do,” replied Andrea, “at least on paper. But we’re not sure what platform to base it on.” As a keen Lancia enthusiast, Paul instantly recommended the Lancia Delta integrale. Such enthusiasm was created between the pair that, within weeks, Koot and Zagato had signed a document to develop just such a car.

This would actually be the very first project done entirely under Andrea Zagato’s watch, as he assumed command from his father Elio. The design was done by a young stylist at Zagato called Marco Pedracini, although Andrea Zagato did also invite Mario Maioli (Fiat’s head of design) and Walter de Silva (the same at Alfa Romeo) to look at it, and they both suggested certain tweaks to the shape.

The Hyena debuted at the January 1992 Brussels Motor Show to great acclaim, with quite a few pre-orders being taken by an enthusiastic public. Lancia was persuaded to supply Delta integrale rolling chassis to Zagato, with a stated intention of a limited run of 75 cars. But very quickly Lancia seemed to back-track on the deal; the expected chassis simply did not materialise. Unable to face the project falling at this hurdle, Koot was forced to buy brand new Lancia integrales from Italy – including some rare limited editions like the Verde York. A whole batch of integrales was duly transported to Holland, where they were stripped bare and then shipped back to Zagato in Milan to be fitted with new aluminium-and-Kevlar bodywork. After that, they returned to Holland for final assembly! Of course, this tortuously convoluted manufacturing process meant costs spiralled, and the resultant sticker price – over £80,000 at the time – meant that demand inevitably suffered.

In the flesh, the Hyena looks compact and devoid of superfluity – very much living up to the single-mindedness of the animal that gave it its name. It’s actually slightly longer than the donor Delta, but narrower and quite a lot lower. Inspiration from Zagato’s back catalogue comes from the likes of the 1960 Lancia Appia Sport GTE and 1965 Fulvia Sport, but only tonally; in detail, the Hyena is very much a product of the 1990s.

I’d never really appreciated just how much of Zagato’s Alfa SZ there is in the Hyena. The entire glasshouse – windscreen, rear screen, side glass – is pure SZ, as well as the door frames and roof structure (although unlike the SZ, there’s a ‘double-bubble’ roof). Other ‘borrowed’ SZ items include the headlamps (set behind Perspex covers) and foglights, while the rear lights on this example are covered by (non-standard) smoked Perspex. In case you’re wondering, and the door handles come from the Alfa Spider. Like the SZ, the spare wheel sits in the tail, although curiously there’s no external lid to access it.

Surprisingly, the two doors don’t open very wide, but what they reveal inside is a heavenly ocean of carbonfibre. The original plan had been to make a one-piece carbon cabin but the expense would have been excessive. As it is, the leather seats have carbon backs, while the dashboard, inner door covers, centre tunnel, control knobs and sill covers are all carbon. The rear seats are tiny – strictly for very small children – but they can fold down to form a luggage platform. This car isn’t quite as it came from the factory: it was repainted in 2004 in black from the original red, and has Teknofibra cabin insulation to cut noise.

It’s the HF grille badge that gives the game away: underneath the taut bodywork lies a complete Lancia integrale Evo I. Since the Hyena weighs 200kg less than the integrale on which it’s based, even standard 215hp versions are very fast indeed. In period, Lusso Service offered a 250hp upgrade which reduced the 0-62mph time from 5.7 seconds to 5.4.

In 300hp guise, it certainly feels fantastically feisty. After some initial turbo lag, the power veritably explodes. The launchpad acceleration is aided by Lancia’s standard four-wheel drive traction. Even by modern hot hatch standards, this feels an extremely quick car.

It’s also a brilliant handler. The Hyena’s suspension was upgraded from the standard Delta’s, using competition-style Koni adjustable dampers (later switched to Bilstein). With an engine strut brace and a carefully engineered structure, the Hyena is torsionally more rigid than the base integrale, with easy-to-feel benefits for how it feels around corners. Since the donor Lancia isn’t exactly wanting in that respect, it’s no surprise that the Hyena feels delightful. The 205/45 ZR16 tyres provide grip aplenty and there’s a sharper steering feel, too. Yes, there’s understeer if you push hard, but the lightness of feel goes beyond what the base Lancia has to offer. The Hyena truly dances around corners.

You might have guessed by now that I absolutely loved my experience with the Hyena. This car would be in my dream garage tomorrow, but for one small obstacle: its very rarity makes it highly sought after. This is one of just four of the 24 cars made which are thought to exist in the UK. If you wanted to buy a Hyena now, you’d be talking a figure around the £200,000 mark. Sadly, I’m about 199 grand short of that. What I can take away, though, is hyena-like laughter from driving it. Memories like that are going to remain fresh for a long time to come.

There’s one little-known coda to the Hyena tale: it could well have become a mainstream Lancia model. In 1993, ex-Zagato designer Ercole Spada was tasked by Lancia with evolving the Hyena design with an eye to making it a new mainstream coupe for Lancia showrooms. The project was dubbed Delta Sport and it would have used the new-generation Delta II (which Spada himself had designed) as a basis. Hand-drawn archive designs show that it would have featured a more conventional front end, reshaped rear three-quarter windows and a hatchback.

The ‘Sport’ might even have formed the basis of a new Lancia rally car. However, ultimately Fiat chose to abandon rallying and repurpose Lancia as more of a luxury brand than a sporting one. As a result, the Delta Sport was ditched in favour of the Lancia Kappa Coupe (as featured in Auto Italia December 2018) – one of Lancia’s worst commercial flops of all time. The Delta Sport was, truly, an opportunity missed.