Now meet tomorrow’s hot hatch heroes. With the latest Honda Civic Type R raising the stakes in the hot hatch market, we look at how its rivals will respond over the next 12 months. Words and photos by Adam Towler.

TOMORROW ’S HOT HATCH We’ve got it good now, but the hot hatches due in 2018 show signs of even greater things to come. 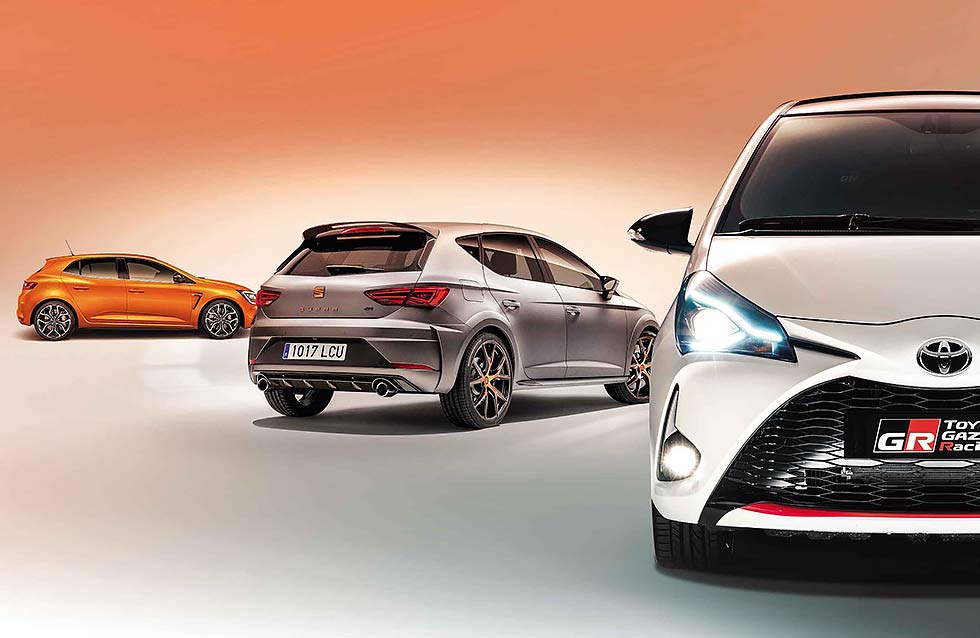 Twenty-seventeen might just go down as a watershed year in the history of the hot hatch. With 400bhp now the target for the most powerful of the breed, it’s also cause for reflection on what attributes a hot hatch requires to succeed as the decade draws to a close, and what the next batch of new arrivals promise for the years ahead.

First and foremost, can the new Audi RS3 Sportback even be termed ‘a hot hatch’ given its power (394bhp), acceleration capability (0-62mph in 4.1sec), generous weight (1510kg) and other vitals? Perhaps the time has come to start properly differentiating the merely potent from the extraordinary with some trite term such as ‘superhatch’ or even ‘hyperhatch’.

Then again, not all the new arrivals seem to be complicit with a race for more horsepower, and the third-generation Renault Sport Mégane is a case in point. The Mégane’s substantial portfolio of talents has never been defined by raw power alone, although its numbers have usually been competitive. Nevertheless, in recent years it’s been the trusty 2-litre ‘F4’ engine that has started to show the package’s first signs of weakness in the face of its rivals. In a class where 300bhp has rapidly become to be seen as the minimum required, the old car’s peak of 271bhp (in its ultimate guise), and a top end without the same effervescence as the most potent VW TSI engines, had started to betray its age. Not, it must be said, that we cared: it remained the pick of the bunch to drive right up until its demise. 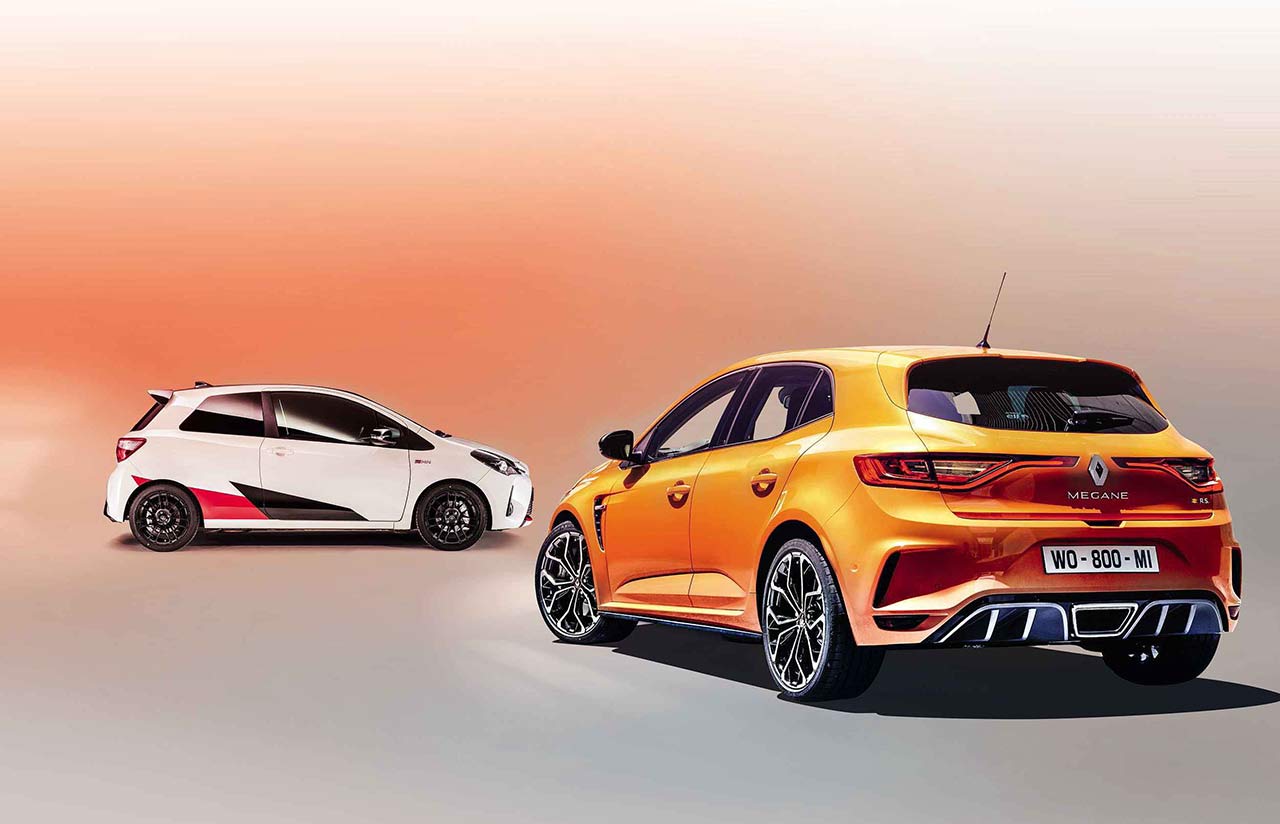 2018 Hot Hatch Heroes. Above: Toyota is re-entering the hot hatch fray with the limited-edition Yaris GRMN, powered by a supercharged 1.8-litre four-cylinder. Right: third-generation Renault Sport Mégane retains its focus on the driving experience rather than outright power, although a Trophy version will have 296bhp.

Yet Renault Sport has not – yet – joined the 300bhp collective: it is actually downsizing, adopting the 1.8-litre engine also used in the forthcoming Alpine A110, initially with 276bhp. That a 296bhp Trophy edition has already been announced for the end of next year is either merely a logical development or a tacit admission that power does indeed sell.

For years it was said that 200bhp was the maximum that could be deployed through the front wheels alone, but 20 years of technological advancement has overturned all of that. Renault Sport and Ford can take much of the credit, developing twin-axis front suspension systems – PerfoHub and RevoKnuckle respectively – that separate the steering and damper forces from each other, and combining these with ever-more sophisticated limited-slip differentials to deploy not just the horsepower but, more significantly, substantial amounts of turbo-fed torque. Meanwhile, Ford’s Focus RS and VW’s Golf R have continued the four-wheel- drive bloodline from cars such as the Lancia Delta Integrale and the Ford Escort RS Cosworth, but these blur the line between the hot hatch and something altogether grander.

Renault Sport would probably much rather we focus on the new Mégane’s four-wheel steering than its power output, which in terms of dynamic agility may do for the large-sized hot hatch what a similar set-up has achieved for the Porsche 911. In both cases, the core car has grown to a point where the inherent agility possessed by earlier models became compromised. Although the average C-segment hatchback has stopped piling on the pounds in the way of its recent forefathers, general dimensions, wheel size and the sheer breadth of capability of the modern car is still increasing.

A case in point is the new Honda Civic Type R, the only real weakness of which is perhaps that the pitch of its stellar abilities, and its stability at anything other than ten-tenths, are in danger of making it feel undramatic on occasion.

And so the way ahead may be shown by the supermini class, where even the new contenders are at a size and weight more compatible with the traditional charms of the hot hatch. If the new Mégane RS turns out to be a winner, expectations will inevitably rise for future developments of the current Clio, a car that has disappointed so many to date. In the meantime we have our class favourite – the Peugeot 208 GTi by Peugeot Sport – to celebrate. We’re big fans of the 308 GTi by Peugeot Sport, too, but it’ll be the next generation of cars that really prove whether Peugeot is back to its old brilliance. PSA CEO Carlos Tavares has rather a lot on his plate at the moment, redefining and securing the future of Peugeot, Citroën and DS, integrating Opel into the group, and the continued rumblings of cheat software on diesel-powered PSA cars, but he’s an avid petrolhead, so we live in hope.

We’ve already driven a Toyota Yaris GRMN in near production-ready form, and impressed we were, too. By using a supercharged 1.8-litre four-cylinder engine the Yaris is neither downsized or turbocharged, and in many ways it’s all the better for it. Its loud exhaust, feisty character, appetite and requirement for revs and bespoke feel mark it out as a more traditional type of hot hatch, and that’s no bad thing. In the longer term, just a hundred 209bhp GRMNs retailing at £26,295 will do little to change the overall hot hatch market in the UK, but Toyota will surely not leave it at that – particularly given CEO Akio Toyoda’s enthusiasm for sporting machinery.

The new Supra and, further off, new MR2 are on the way to complement the GT86, but who’d bet against a Yaris of slightly lower specification than the GRMN to eventually join that range. Which brings us neatly to the new Fiesta ST. Having swept to the top of the hot hatch sales charts in its previous incarnation, the next ST is one of the most eagerly anticipated performance cars of 2018. Unlike its predecessor, it’ll be a product of the Ford Performance division, which is riding high after the Focus RS and the GT supercar, but the big news is the switch to a 1.5-litre, three-cylinder engine. While the loss of a cylinder and 100cc hasn’t resulted in a drop in power – the peak of 197bhp matches the old car’s 1.6-litre four-pot on overboost – the new engine is based on the 1-litre EcoBoost triple, and that motor has never felt even remotely like a responsive, sporting power unit. The adoption of an electronic sound enhancer and rumours of driver modes and adaptive dampers have raised a few eyebrows, too; the beauty of the old Fiesta ST was its relative simplicity and paucity of gimmicks, which concentrated the simple driving thrills of an enjoyable chassis and punchy engine. Let’s hope none of that has been lost with the new car.

Over at SEAT we await the arrival of a bronze-embellished Leon that had us rather worried. We say ‘had’, because it turns out that underneath the Cupra R’s gaudy detailing and questionable bodykit is different suspension geometry, a new steering rack, new engine mounts and more, meaning the 10bhp power increase to 306bhp – and only if you spec the manual gearbox – is of much less interest. 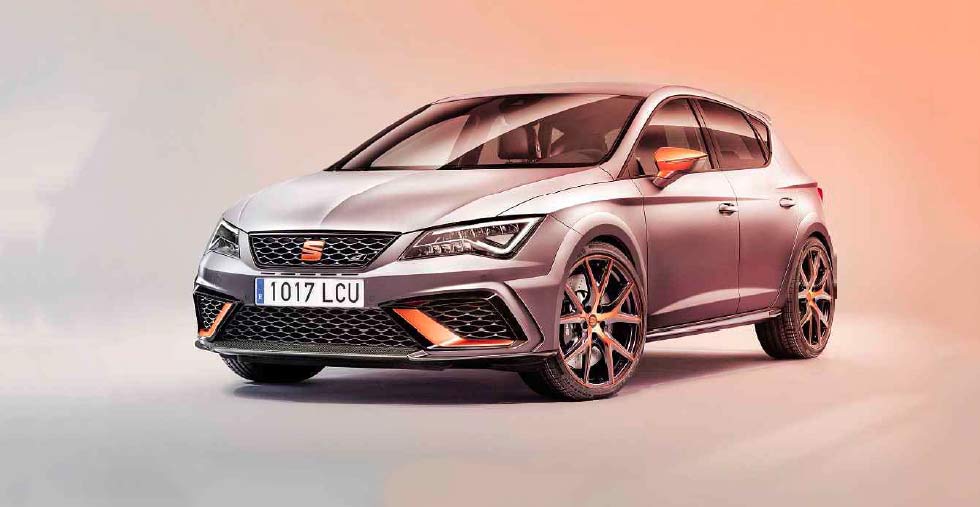 2018 Hot Hatch Heroes. Above: SEAT’s Leon Cupra has so far been a ‘nearly’ hot hatch – nearly great, but falling just short of greatness; can the new Cupra R rectify this?

Perhaps this car will address the shortcomings of the Cupra 300 in our Supertest this month. It’s a pity, though, that the visual updates are such a clumsy response to the accusations that the current Cupra is so plain, so sensible. As discussed in this issue’s Briefing, from its exterior design and colour palette to its dour, black interior, it’s not a car that conjures up the sort of bubbly enthusiasm once generated by red carpet and yellow paint.

If SEAT surprised us at the recent Frankfurt motor show, then our enthusiasm was really lit by the next Suzuki Swift Sport, and with good reason, for this is a modern car meeting all relevant crash test legislation and yet with a kerb weight under a ton (970kg). For a mass-produced, relatively humble car, that’s a fantastic effort, and it puts the Swift Sport in something of an exclusive club alongside other weight-conscious sporting minnows such as the current Mazda MX-5. With 138bhp and 170lb ft of torque from its turbocharged 1.4-litre engine, the Swift should be more than powerful enough for its mass, but it’s what that lack of kilos could do for the car’s dynamics that really excites us. Which, in a way, is where we came in.

Because you can drop a 400bhp engine into a hatchback, and it will go very fast indeed, probably easing into the 170mph-plus territory.

Mercedes AMG CEO Tobias Moers told us at Frankfurt that it’s ‘mandatory’ for the next A45 to have a power number beginning with a four. And that will surely be good fun on an autobahn, and very quick between roundabout A and roundabout B. But as anyone who’s driven a Mk1 Golf GTI, a 205 GTI or a Clio Williams will attest, it’s not power that makes a great hot hatch, but the perfect blend of qualities from practicality right through to chassis balance.

And all infused with a sort of magical spirit that makes any driver grin at any speed. With the ever-increasing pressure of emissions and fuel consumption reduction, maybe the necessity to cut the flab will be the key to a new generation of enjoyable-anywhere hot hatchbacks.

‘As anyone who has driven a Mk1 Golf or 205 GTI will attest, it’s not power that makes a great hot hatch ’