IT MIGHT have one of the longest model names in the world, but the Challenger SRT Hellcat Redeye is not trying to oversell itself. It’s just Dodge being specific. And with 15 variants in the US line-up, it needs to be. You don’t drive just an SRT Challenger these days. You drive a Hellcat, a Demon – if you’re very lucky – or, new for 2019, a Redeye. 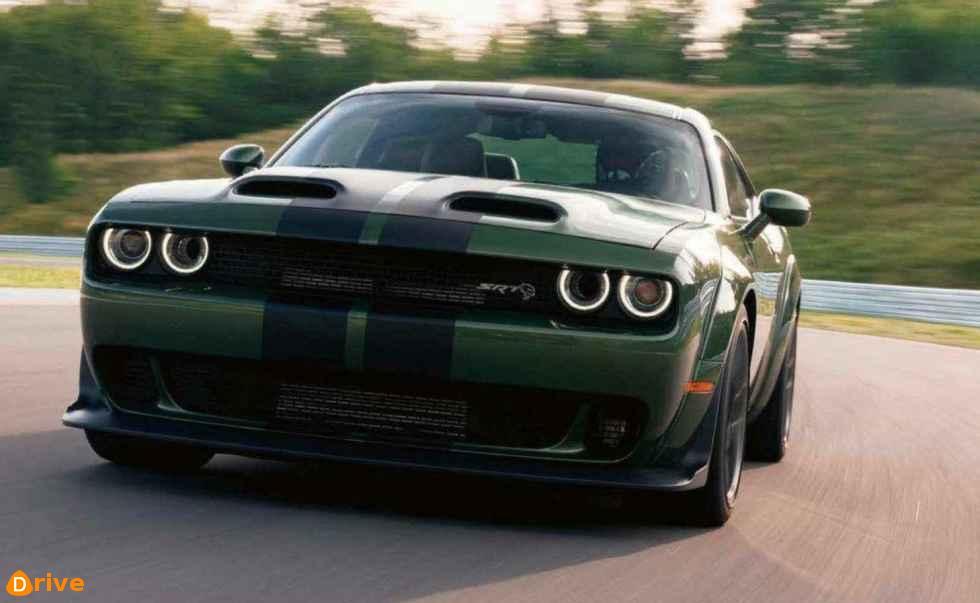 Better still, thanks to Crossover Car Conversions (CCC), you can get your hands on the Redeye for about $228,000 (including the conversion, but not on-roads) in Oz. You’ll have to wait about six-to-eight months for the full right-hand drive switch to be completed, but some pre-orders have already been taken.

So what are those buyers getting – what exactly is a Redeye? Good question. It’s the 327km/h love child of the Dodge Hellcat and its big brother, the Demon. It swaps the Hellcat’s uprated-for-2019 535kW supercharged V8 and replaces it with the high-output version of the engine used in the dragtuned Demon. So it gets an intake and post-run intake chiller, plus all the stronger parts.

But not the huge, single-intake hood scoop. Despite growing new double nostrils on its bonnet it flows less air, which shaves off a few kilowatts. The Redeye also posts a maximum of 594kW/959Nm instead of the Demon’s 626kW/1044Nm… But we’re sure you won’t miss the 32kW/85Nm. However, what might cause a few head scratches is specifying the body to house the engine.

That’s because you can now get your Hellcat Redeye in narrow, normal body form, or with an 88.9mm-wider widebody option. The reality is there’s a lot more than cosmetics to consider.the car at the strip, that’s probably no great loss. There is also a skimmed-out version of the Demon, the R/T Scat Pack 1320 coming soon, which has a lot of that clever stuff.

Expect to pay around $190K through CCC to have this parked in your Aussie driveway. The benefit to the Redeye deleting all the Demon drag paraphernalia – notably the squashy Nitto drag radials – is that its top speed is not tyre-limited to 270km/h. Its Pirelli P Zeros are good all the way to more than 327km/h whenever the time, place and occasion should arise.

It also gets six-piston front calipers instead of the Demon’s lighter-weight four-pots. We drove the cars on some pockmarked roads and a super smooth racetrack hacked into the side of a mountain. Neither allowed us to experience the upper reaches of the car’s top speed, but we did get enough time behind the wheel to discover it still has a surprising amount of poise and balance.

You steer as much with the throttle as the steering wheel, as per normal Hellcat duty. But the way it warps down the straights and flattens hill climbs is on a new, faster level. On the road it still couldn’t be much more civilised, comfortable and easy to drive. The 0.3-litre larger – than the standard Hellcat – supercharger only fills the cabin with its slightly more baritone shriek when you really get stuck into the right pedal.

Cruising at 100km/h in eighth (top) gear, the ZF box drops no fewer than four gears With the best part of 600kW trying to find its way to the road – via just two contact patches – you really need the biggest tyres you can get. Since the widebody cars come with 305-section 20-inch tyres instead of the standard 275s, they should be a default choice, even if the package does add a significant price premium.

Other than the Air Grabber bonnet, what the Redeye does not get from the Demon is all the specialist drag kit – the drag-tuned Bilsteins and software, the transbrake, the set of skinny front wheels and the bespoke crate packed with other drag-strip accessories. But, unless you are planning to really use when you mash the throttle.

At that point, you are in no doubt which Challenger you are in. Ultimately, the chances of seeing a Redeye, let alone buying one, in Australia are few right now. Luckily, the aforementioned Crossover Car Conversions can make the dream a reality – and the delivered cars will comply with our strict ADRs.

They will charge you for the work, but the good news is that the Redeye retails in the US from just $69,650. Even with the conversion done, you’ll be hard pressed to find a car with not just a longer name, but also more power per dollar.