When it comes to classic Griffins and their Blitzbadged cousins, there are models which the passage of time has treated incredibly well. We’re not talking about resistance to corrosion. 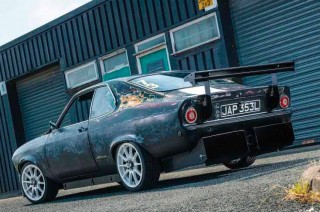 After all, vintage Vauxhalls and old Opels love to rust! No, we’re referring to the meteoric surge in popularity and iconic status enjoyed by some of the older performance products in the back catalogues of our favourite manufacturers. These cool cars are arguably more revered today than they were during their time in production, with many seen to be mega-desirable because of their old-school charm and an ability to accept modern tuning equipment, thereby increasing the potential for street smiles over and above what was originally offered from the factory.

Few cars are held in the same high regard as the Manta. Utter the name of this most awesome of Opels and even people who aren’t into motoring will bring to mind an image of a B-series edition of the rear-wheel drive sports machine. This is hardly surprising; during the 1980s, Mantas were hugely popular in Britain, offering buyers the opportunity to acquire a GM gem proving itself to be a fierce competitor in the highly publicised world of rallying. And who doesn’t want to own a rally car that can be driven on the road?!

In terms of looks, late Mantas share more than a few similarities with the contemporary Cavalier, but turn the clock back to the start of the 1970s and things were very different. Taking the form of a mini muscle car, the first-gen Manta was launched as competition for the Ford Capri. The Opel’s front end was shark-like, taking design cues from GM’s 1961 XP-755 concept car. At the rear, Ferrari-esque round taillights were in keeping with what the manufacturer was choosing to do at the back of the Opel GT, while engine options with displacement starting at 1.2-litres (climbing to a range-topping 1.9-litres) powered the Manta A throughout its five-year lifespan. 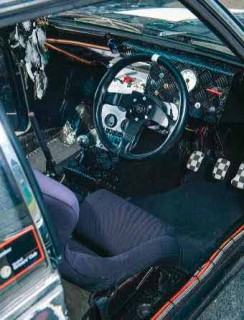 Gareth Henson’s 1973 Manta A Berlinetta started life with the biggest cam-in-head (CIH) engine on offer. In standard trim, the car also sported a vinyl roof. As you can see, both features are absent today! “I remember witnessing a pensioner in a Trilby climbing into an early Manta with a gloss black bonnet,” he recalls. “I was sixteen years old. I hadn’t ever seen a Manta before. I knew nothing about the model, but the old boy’s Opel had a really angry look about it. I wanted a Manta from that moment onwards!”

More than three decades later, his dream finally came true. “I sold my house and ended up with spare cash in the bank. I wasn’t in a position to invest in a project car when I’d previously seen first-generation Mantas advertised in classifieds, but I didn’t hesitate to buy the Berlinetta I’m in possession of today when I saw it advertised for sale at just £850 in 2004,” he confirms. He admits he didn’t know a great deal about tuning back then, but after reading a Performance Vauxhall article about Simon Peckham’s nitrous-injected Manta A in 2006, the former graphic designer decided to attend the Vauxhall Bedford Opel Association (VBOA) National Rally in the hope of meeting Simon and asking him a few questions regarding best practice when it comes to modifying Mantas. “I travelled all the way to the show’s home at Billing Aquadrome from my house in Liverpool, only to discover Simon hadn’t taken his car to the event!” cries Gareth. Fortunately, all was not lost. “After wandering around the various wellattended club stands, I spotted the heavily modified white Manta B owned by A&M Conversions boss, Antonio Lommano,” he smiles.

The Manta he’d caught sight of is another Performance Vauxhall feature car, and one which Antonio continues to use as a calling card for his servicing, maintenance and tuning business. Unbeknown to Gareth, the A&M workshop was just two miles from his house in Deeside. “I couldn’t believe it!” he roars. “I’d travelled a round trip of three hundred miles just to meet one of my neighbours!” It was the start of a friendship that lasts to this day, and resulted in Antonio offering Gareth sound advice contributing to the mechanical makeup of the mental Manta we’ve presented on these pages.

It had been on the receiving end of fresh sills at some point in its life, but the new metal had been bodged into place. Similarly, the questionable condition of the car’s rear valance left Gareth with little choice but to ensure his prized possession’s body was in good structural order before he could tinker with tuning. As a result, the poor sill work was made good, new wings were fitted, lower rear quarter corrosion was repaired, replacement doors were sourced and chassis rails were strengthened. 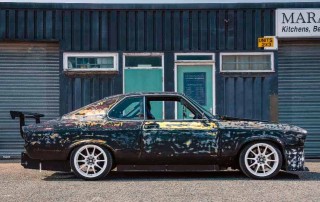 As a temporary measure “to make the car look presentable” following its corrective surgery, Gareth got busy with a steady stream of rattle cans and painted his altered Opel matte black. Curiosity, however, got the better of him. “I found myself wondering what colour the car might have been sprayed in the past. I sanded each panel down to reveal yellows, purples and primers. As a fan of ‘rat rod’ American muscle, I really liked what I was looking at, which is why I ditched the idea of a respray and left the car’s bodywork more or less as you see it today!”

He smoothed the rear quarter vents, made custom side skirts and added a bespoke front valance utilising Mk2 Volkswagen Golf indicator assemblies. Integrated engine cold air feeds appeared at each side of the front end, while the standard grille was gutted and the outer lights were blanked. “I’ve seen plenty of Mantas with their inner lights deleted. I wanted to try something different,” he muses. He also adopted an unorthodox approach at the rear; above a custom diffuser sitting where the damaged rear valance once lived sits a large wing with its mounts travelling through the inner rear light cavities! Just like the nose end of the car, modern LED lighting replaces candle-spec factory illumination, negating the need for the inner lamps.

A front-to-back chequer-board stripe and a raised bonnet with an integrated NACA duct suggest the car can call upon more than the 100bhp it left the factory with almost fifty years ago. “Like Simon’s Manta A, mine is powered by a Red Top,” beams Gareth. The two-litre lump features pocketed pistons, ARP rod bolts, an uprated oil pump, a ported cylinder head, Kent fast-road camshafts and screams through QED throttle bodies with polished trumpets. Suitably, an Opel metal spark plug cover tops the sixteen-valver, which has been hand signed by BTCC drivers, Tom Chilton and Tom Onslow-Cole. The celebrity signatures highlight Gareth’s love of tin-top racing. 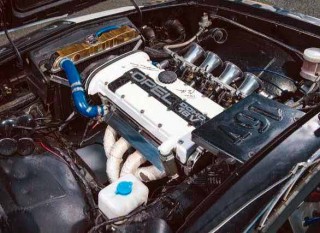 The engine is fed by a Facet fuel pump linked to a narrowed rally-spec Mk2 Ford Escort fuel cell positioned in the boot space between the inner wheel arches. The removal of the standard rear valance and stock fluid transfer equipment has allowed for the uninhibited routing of an A&M Conversions ported 2.5-inch stainless steel exhaust system mated to the C20XE via a heat-wrapped four-two-one exhaust manifold. Together with noise produced by the QED kit, the stainless pipework generates a loud bark from a powerplant currently managed by a DTA E48 ECU.

Look closely and you’ll see the continuation of the chequer-board design on the inside of each BSA wheel. Look closer still and you might be able to make out Ferrari 355 front brake calipers. Stopping power from a Prancing Horse contributes to a wealth of chassis upgrades, including rear calipers from Rally Design and a Manta B back axle delivering an extra 2.5-inches of track width over the standard item. All work was carried out in-house at A&M Conversions.

Transmission upgrades continue with a Manta B 1800 five-speed gearbox, a lightened flywheel, an AP Racing clutch, a steel torque tube and a Gripper plated diff. Spax adjustable dampers help to keep the car planted firmly to the asphalt, while custom springs produce a ride height low enough for each rear wheel arch to hug Falken Ziex rubber without making contact.

“I’m always wanting to add new equipment,” stresses Gareth. “I’m currently saving for a set of GAZ coilovers. My desire to continually update the car is partly the reason its cabin is so sparse,” he chuckles, highlighting the lone bucket and rally-spec switch panel. “I ripped out the original seats, door cards, sound deadening material, carpets, dashboard and almost every other standard part present,” he remembers. Just like the rattle can finish applied to each body panel, the reconfigured cockpit was supposed to be a temporary arrangement. Twelve years later, it remains the same, save for the smartphone which acts as the car’s speedo!

While the first Manta is nowhere near as well-known as later cars with the same name, Gareth’s rough and ready two-door proves there’s a world of fun to be had with Vauxhalls and Opels of all ages, no matter how popular they may have been during the time they were originally on sale. The challenge prospective owners have is finding a modern classic that hasn’t been savaged by the dreaded tinworm, but with guys like Antonio on hand to offer tuning services and advice regarding the maintenance and modification of older Vauxhalls, plus the availability of a massive amount of aftermarket tuning gear suitable for performance engines newer than what was fitted to these cars at the factory, it’s no wonder surviving retro rides are being enthusiastically rescued, tweaked and tuned with increasing regularity. Long may it continue!

THANKS ant at A&M conversions for his skills and expertise at all times.

BEST THING ABOUT YOUR MANTA BERLINETTA Its racing stripe!

Red Top is not so red-topped, but has been signed by famous BTCC drivers. QED throttle bodies sound fantastic on full chat. custom exhaust exits through bespoke diffuser. Not exactly how it left the factory. Raw interior was supposed to be temporary.