So, you’ve reached the point in your life where a combination of your bank manager’s stonewalling, the persistently high cost of having children, and the fact that those pesky six numbers still haven’t come up, all conspire to mean you’re not getting that M4 that you so desire. Its price, its insurance, its sheer running costs just mean that’s not, now nor ever, going to happen. 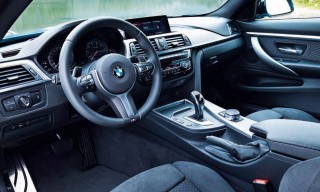 But I’m here to tell you that that’s OK. So have a seat and a soothing cup of tea, and I’ll tell you why you don’t really ‘need’ an M4 in your life. My story begins with a 440i M Sport, and pretty much ends with that very same car because, while the updated six-pot 4 Series Coupé has a successive, rather than preceding, M-badge, it’s every inch a worthy substitute for the M4, when you can’t afford the faster car.

BMW has, as you’ll probably know by now, recently updated the 4 Series. But, if you haven’t spotted the diff erences, don’t worry – all but the most rabid of Munich anorakwearers will glide past these changes without realising.

Cosmetically, you might just pick up on the new all-LED headlights, with their hexagonal highlighters, but I’d be amazed if you noticed that the tail-lights are now also all-LED.

There’s a little more sculpting around the bottom of the bumper and the air intakes, and the option of two new colours. Sunset Orange is pleasantly bright and Snapper Rocks Blue is fi ne too, albeit a poor relation to the more classical Imola Blue. 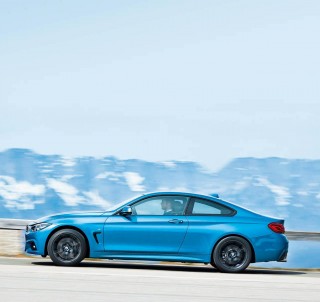 Inside, much is as it ever was – a driving position so low you feel as if you’re sitting in an inspection pit, good quality materials all round and surprisingly generous space in the back seats, making the 4 Series Coupé a practical proposition even if you don’t buy the four-doors-and-fastback Gran Coupé.

BMW does say that the interior has been upgraded with a smarter sheen on the plastics, and a lift in the quality of the switchgear (including little fillets of chrome that have been electroplated on to the leading edges of some buttons). Overall, though, the effect is very similar and familiar; there’s nothing wrong with that, of course.

However, there is some more significant newness; you can now optionally order the all-digital ‘Black Panel’ instrument pack, which we’ve already seen on the 7 and 5 Series. It’s clever and versatile, and does a great (and classy-looking) imitation of real analogue dials. But the big-numbers-on-red-background layout for ‘Sport’ mode does look a bit cheap and video-gamey to these eyes.

You can, of course, change that in the settings menu in iDrive, and, when you do, you’ll notice that this too has been borrowed from the 5 and 7. It features the new ‘tile’ layout for the screen, which is a little nicer to navigate than the older system.

Somewhat confusingly, you can also now use the display as a touchscreen, as well as using the more traditional click-wheel controller (the top of which is touch-sensitive, to allow you to input hand-written sat-nav instructions). Providing a touchscreen and click-wheel seems like overkill, but I’m guessing that most owners will use either one or the other – not chop and change between the two. 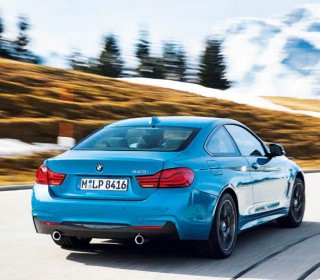 Other new features include Apple CarPlay connectivity, plus the full suite of BMW Connected options, including such things as email integration and car-to-computer (or phone for that matter) communication. Clever stuff, but not quite why we’re here…

What’s even more notable is that BMW has made some proper, oily-stuff changes too, chiefly to the suspension. The overall layout remains the same, as does the centre of gravity, which is some 40mm lower than you’d find in a mechanically-similar 3 Series. The 4 Series has been given stiffer suspension, the ride-quality downside of which BMW has countered with more sophisticated dampers, and there’s slightly retuned steering as well. The factory claims less roll and pitch, and a more neutral behaviour when you reach the tyres’ limit of adhesion.

Such limits were easily to hand during our test on wet (occasionally snowy) roads in the mountains near Munich, and the temperatures were so perishingly low that BMW’s experts had decided we needed winter tyres.

Thus equipped, the 440i, with its 3.0-litre TwinPower turbo engine – unchanged from when it was updated last year (326hp and 332lb ft of torque), proves something of a revelation. In such soaking, freezing conditions, you’d expect a powerful, turbocharged inline-six coupé to be a handful, but it just isn’t. In fact, in Comfort mode, it’s positively languid. Maybe a touch too much so, as the steering (not helped by the over-padded M Sport steering wheel) just feels a touch too remote.

But click the selector button on the centre console (next to the pleasingly analogue, mechanical handbrake) over to ‘Sport’, and things improve. There’s barely any deterioration in the ride quality (it gets firmer, not harder), but the steering jerks awake, and the straight-six makes an extra loud snarl, boosted by extra acoustics in the stereo system.

Does the 440i suddenly turn into an M4? Well, no, but it does come alive – bursting out of corners with a whiff of DSC-controlled drift, snarling up through the gears (I wish we’d had a manual version to test),and feeling like exactly what it is – a proper, big-engined GT with a seriously sporty undercurrent.

It won’t out-pace an M4, but do you really need to go faster than 0-62mph in 5.2 seconds, or 155mph flat out? Of course you don’t; not when the whole car feels this agile, looks this good and is, under it all, this practical. It’s also a not-inconsiderable £14,000 cheaper than an M4.

So, you see, you don’t really want an M4. A 440i will do the job nicely. Even your bank manager will be happy…

Feeling like exactly what it is – a proper, big-engined GT with a seriously sporty undercurrent 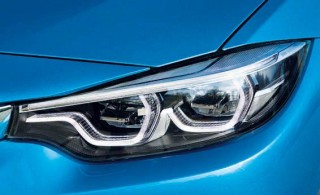 An over-padded steering wheel is one of the few criticisms inside. Great to see a proper handbrake!

Below: Exterior changes are few and subtle; LED headlights with hexagonal highlighters are one.