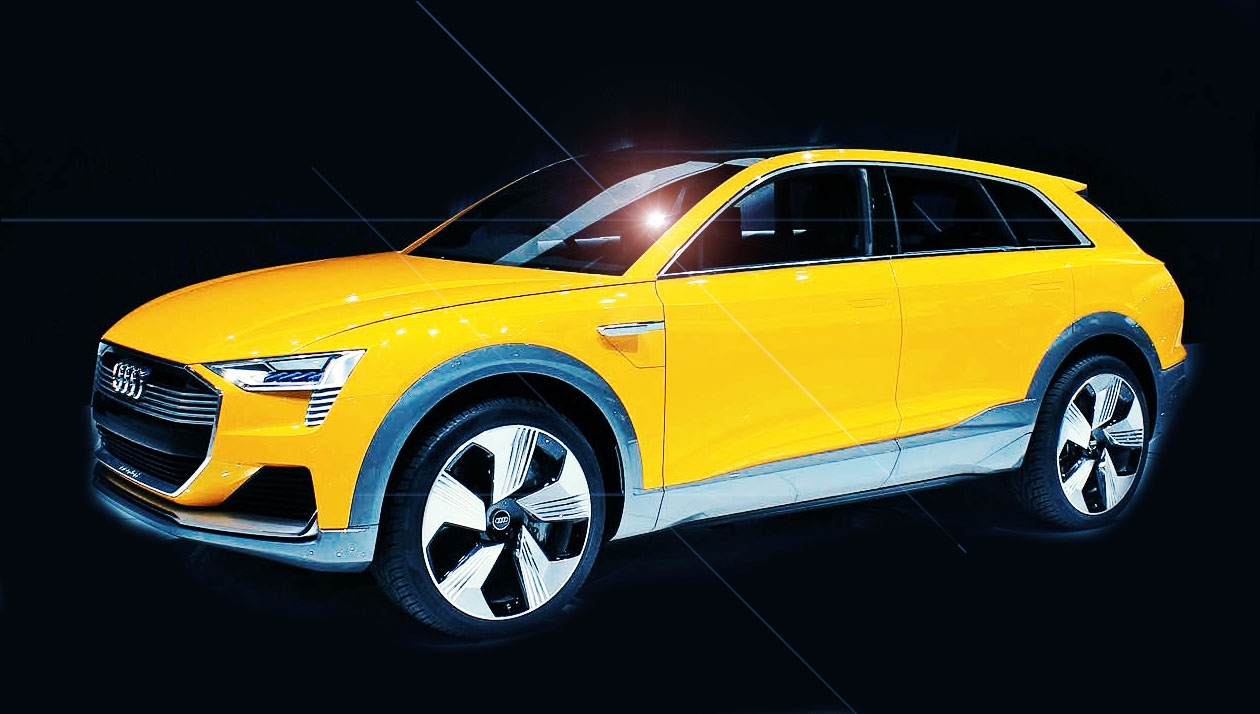 Audi reinforced its dedication to alternative-fuel vehicles at the 2016 North American International Auto Show in Detroit, with the world premier of the h-tron quattro concept. A follow-up to the A7 h-tron concept unveiled at the 2014 Los Angeles Auto Show, the concept is packed with cutting-edge technologies, both inside and out, ranging from its hydrogen fuel cells and autonomous driving to vehicle lighting and solar power.

In terms of size, the h-tron quattro fits in between the Q5 and Q7 SUVs, measuring 4.88 metres long, 1.93 metres wide, 1.54 metres tall with a wheelbase of 2.91 metres. Styling is much like that of Audi’s current line yet includes new, high-tech details throughout the vehicle. The low roofline tapers towards the rear of the vehicle giving this SUV a more coupé-like appearance, and yet it still provides a comfortable interior for a driver and up to three passengers.

At the heart of the h-tron quattro is a stack of 330 cells under the bonnet. Fuel cells are nothing new to Volkswagen/Audi: this is their fifth generation of the technology. New materials within the cells reduce weight and improve efficiency and are used for the diaphragms and the bi-polar plates that guide the gasses in the stack. The entire unit is lighter, smaller, stronger and ultimately more efficient than previous generations.

The operating life and responsiveness are improved and the use of platinum is reduced, making the unit less expensive. Hydrogen consumption is also reduced resulting in a fuel cell that achieves an efficiency of 60 per cent.

The fuel cell operates at temperature levels of up to 95 degrees Celsius, and starts easily in temperatures down to minus 28 degrees Celsius. Three hydrogen tanks located beneath the passenger and luggage compartments store enough hydrogen to provide a 600-km (372.5-miles) driving range. One tank is located in the central tunnel between the front seats, and the other two are positioned under the rear seat and cargo area. Like conventional fuel, the tanks can be refilled in under five minutes – much shorter than it takes to fully change a plug-in electric car.

The fuel cells achieve an output of 119 kW (162 PS), and a powerful, compact lithium-ion battery from Audi’s plug-in hybrid model provides a temporary boost of 100 kW (134 PS) when accelerating. Each axle has its own electric motor, providing 4-wheel drive with no need for mechanical power transfer from front to rear, thanks to a 90 kW unit powering the front axle, and a electronic management system transferring power when needed to a 140 kW motor driving the rear axle. In total, the car has a system power of 210 kW (285 PS) and 550 Nm (405.7 lb.ft.) of torque, and it is claimed to be capable of accelerating from 0-100 kph (62.1 mph) in less than 7 seconds and has a governed top speed of 200 kph (124.3 mph).

Much attention has been paid to aerodynamics in an effort to reduce drag (it has a coefficient of just 0.27) and maximise the car’s driving range. Side mirrors are replaced with small cameras, and movable panels along the underbody, sides and rear optimise the car’s aerodynamics. It also features an adjustable airbag suspension that lowers the body in two stages by up to 30 mm in a further attempt to reduce drag. Exterior styling is sporty, and shares much of the design language seen in Audi’s current line-up. The front of the car features Audi’s bold, trapezoidal grille, but because the fuel cell requires a high amount of cool air, the grille is almost completely open. The headlamps, like all of the h-tron quattro’s lighting, utilise Matrix laser technology. This OLED (organic light emitting diode) lighting breaks the headlight beams down into thousands of pixels that illuminate the road in high resolution without blinding oncoming drivers.

The h-tron quattro’s rear profile looks more like that of an estate rather than an SUV, with the tapered roof and low, wide rear window. A speed-activated spoiler extends by up to 100 mm along the upper edge of the rear window, and the lower edge is underscored by a red LED light bar that visually connects the two OLED tail lamps. A lower aerodynamic panel extends to the rear and works with the spoiler above the window to efficiently move air over and under the vehicle.

The entire roof of the car is a blackfinished solar panel that generates up to 320 watts of power to further increase the car’s efficiency.

Technology isn’t limited to the fuel cells. The h-tron quattro features Audi’s autonomous zFAS driving system. Using a collection of radar, camera and surround sensors, the car can pilot itself at up to 37 mph (ideal for congested motorway commutes) while piloted parking also allows the driver to fetch the car from outside the vehicle using either the remote control key or a smartphone.

Once inside the car, the driver is surrounded by large OLED displays rather than traditional analogue gauges. Animated graphics give the two-dimensional displays a 3-D look, and the curved surfaces of the panels are beautiful compared to typical flat screens. Speed, fuel level and driving range are all featured in the central screen in front of the driver. Two touch displays flank the central screen, with the panel on the left used to operate lighting controls and piloted driving features while the one on the right controls the music, navigation and h-tronspecific operation status.

Two additional displays are found on the centre console. One shows the selected drive status and the other display offers gesture control of the climate control system using virtual sliders. Additionally, weather status, appointments and addresses can be called up using assignable preset buttons.

Additional OLED screens are found high on the door panel just ahead of the door handles and serve as digital rear-view mirrors. As one would expect in such a technology- filled concept car, rear passengers will find a pair of removable OLED tablet screens mounted in the backs of the front seats. Equipped with LTE 4G WiFi, passengers in the h-tron quattro can surf the internet and send e-mails via a highspeed connection.

Behind the rear seats, the h-tron quattro holds 500 litres of cargo. Fold the rear seats down, and cargo capacity expands to 1610 litres. Audi have taken the guesswork out of sorting out how to most efficiently load the boot. Sensors in the tailgate trim monitor the pieces of luggage sitting behind the car and a seven-inch display at the rear of the car then shows the best way in which to load the bags.

Overall, the h-tron quattro was such a hit that it was really difficult to photograph the car without a crowd around it. While no production plans are set for the h-tron quattro, expect to find technologies such as the autonomous driving and parking to appear in 2017.

As for the hydrogen power and its zeroemissions advantages, stay tuned. Experts have suggested that rather than a single alternative to fossil-fuelled motoring dominating the forecourt of the future, we may find room for a variety of solutions.

Whether it is hydrogen with the A7 h-tron and h-tron quattro, or synthetic methane with the A3 and A4 g-tron or purely electric, Audi continues to prove its commitment to multiple alternatives.