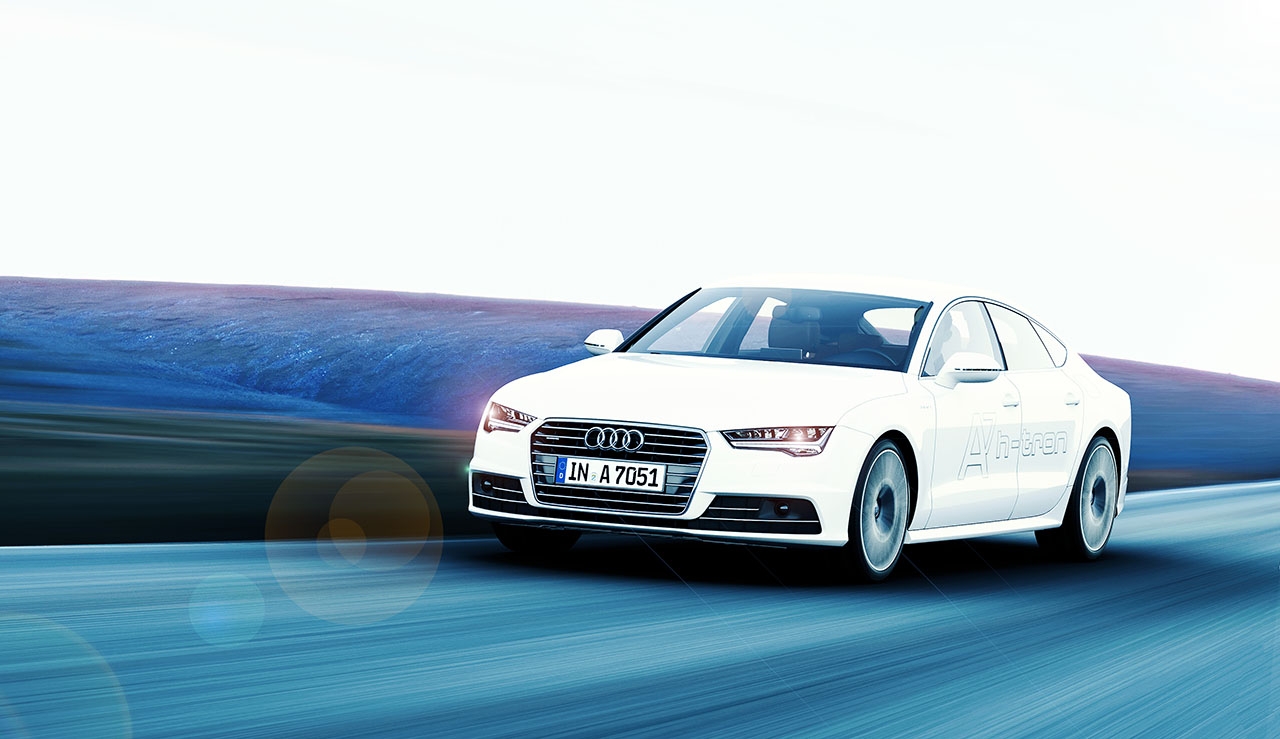 Technology – New A7 Sportback h-tron fuel cell hybrid. New Technology – A7 H-Tron Quattro. With 540 Nm of torque giving 0-62 mph in under 8 seconds and a top speed of 124 mph, the hybrid hydrogen fuel cell / electric drive A7 h-tron quattro can cover over 300 miles on a single fill, with the only tailpipe emissions a few drops of clean water…

Last month we reported on the recent Audi new technology seminar where we were able to experience a whole range of new drivetrain innovations and projected future developments, from electrification and hybrid technology with the e-tron system, to e-fuels, e-gas, fuel cell technology, g-tron and h-tron drivetrains, and related developments like the 48-volt electrical system, wireless charging, electric superchargers and electro-mechanical dampers.

We began with a detailed appraisal of the Q7 e-tron plug-in hybrid (TDI/ electric) because that was clearly the most immediate for implementation, but we also had the chance to drive the A7 h-tron quattro, using fuel cell technology in conjunction with a lithium-ion battery and with two separate electric motors providing drive to both front and rear axles. 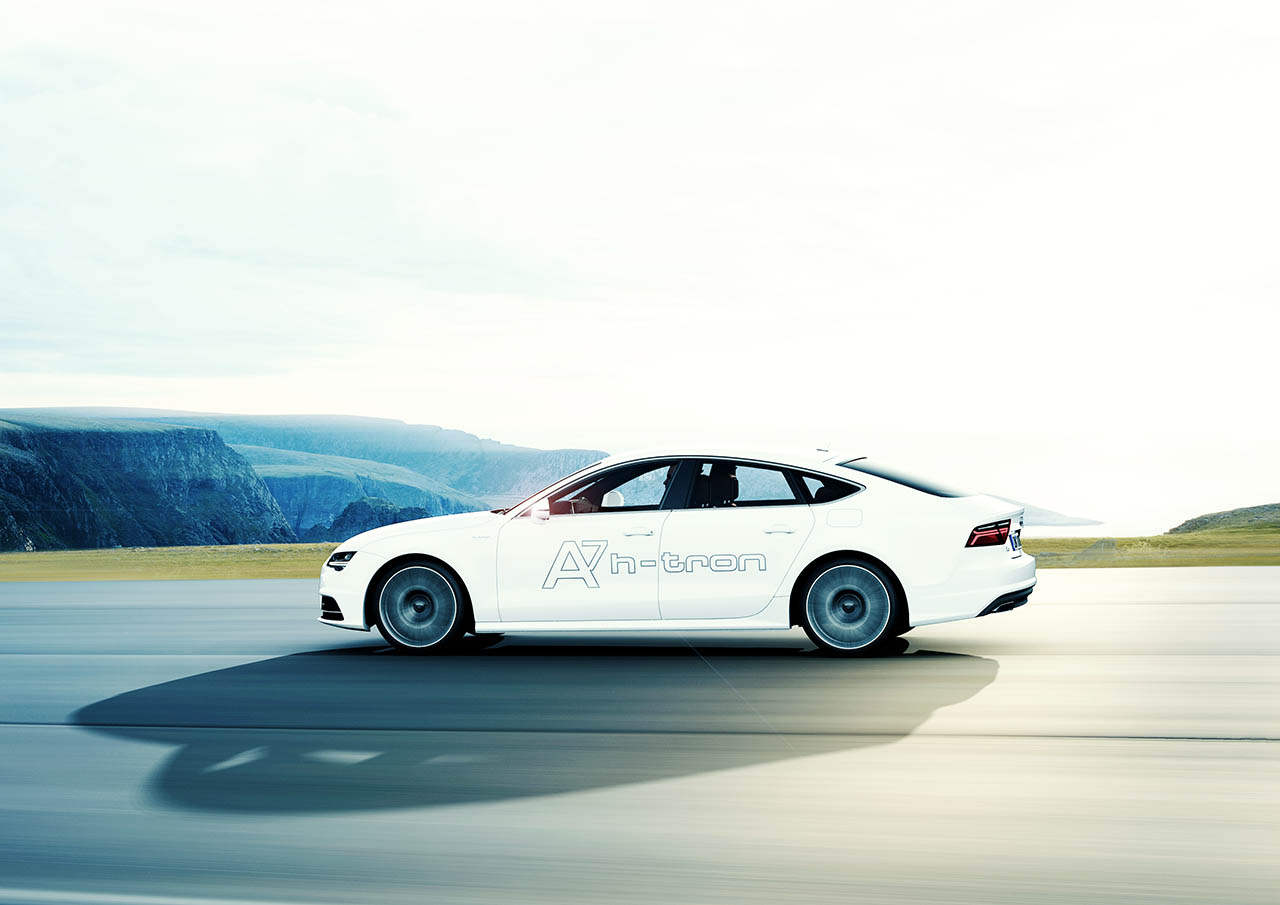 In fact the technology is nothing new. Although Honda and Toyota look set to be the first manufacturers to bring hydrogenpowered vehicles to market, Audi first began exploring fuel cell concepts more than 10 years ago with the compact A2H2 in 2004. Equipped with a polymer electrolyte membrane fuel cell (PEM) – the ideal in this technology – it had a 110 kW electric motor, and a nickel-metal hydride battery served as a buffer.

The Audi Q5 HFC (Hybrid Fuel Cell) followed in 2009, with its PEM fuel cell having an output of 90 kW and supported by a compact lithium-ion battery. But way back then such developments were implausibly expensive and the difficulties of safely storing hydrogen, let alone establishing an infrastructure, seemed prohibitive. Now carbon-fibre reinforced aluminium tanks, positioned beneath the floor ahead of the rear axle, can provide the necessary safety and integrity…

A fuel cell converts the chemical energy from a fuel into electricity through a chemical reaction of positively charged hydrogen ions with oxygen or another oxidising agent. Fuel cells are different from batteries in that they require a continuous source of fuel and oxygen or air to sustain the chemical reaction, whereas in a battery the chemicals present in the battery react with each other to generate electricity. Fuel cells can produce electricity continuously for as long as these inputs are supplied.

There are many types of fuel cells, but they all consist of an anode, a cathode and an electrolyte that allows positively charged hydrogen ions (or protons) to move between the two sides of the fuel cell.

The anode and cathode contain catalysts that cause the fuel to undergo oxidation reactions that generate positively charged hydrogen ions and electrons. The hydrogen ions are drawn through the electrolyte after the reaction. At the same time, electrons are drawn from the anode to the cathode through an external circuit, producing direct current (DC) electricity. At the cathode, hydrogen ions, electrons, and oxygen react to form water.

As the main difference among fuel cell types is the electrolyte, fuel cells are classified by the type of electrolyte they use and by the difference in startup time ranging from 1 second for proton exchange membrane fuel cells (PEM fuel cells, or PEMFC) to 10 minutes for solid oxide fuel cells (SOFC).

Individual fuel cells produce relatively small electrical potentials, about 0.7 volts, so cells are stacked, or placed in series, to create sufficient voltage to meet requirements. In addition to electricity, fuel cells produce water, heat and, depending on the fuel source, very small amounts of nitrogen dioxide and other emissions. The energy efficiency of a fuel cell is generally between 40 and 60 per cent, or up to 85 per cent efficient in cogeneration if waste heat is captured for use.

Audi is taking a unique approach when it comes to fuel cell technology, with the energy chain based on sustainably generated electricity. At its power-to-gas plant in Werlte, Lower Saxony, Audi uses electricity generated by wind power to break water down into oxygen and hydrogen by means of electrolysis. As part of its efforts to further develop fuel cell technology, in early 2015 Audi acquired a package of important patents from the Canadian company Ballard Power Systems Inc. that will form the basis for the development of the next generation of fuel cells. All brands in the Volkswagen Group will benefit from this know-how, and the Group will continue to collaborate with Ballard.

Audi is also working with Volkswagen and other partners on the future of the fuel cell as part of the HyMotion 5 project, with the focus on new materials for the bipolar plates separating the individual cells in the stack in order to make the fuel cell significantly lighter, smaller, more robust and more powerful. Additional strengths are easy cold starting, long service life, spontaneous response and low hydrogen consumption. The price should also drop because the proportion of costly components such as platinum in the fuel cell will decrease.

Mounted in the front of the car, the fuel cell comprises over 300 individual cells formed into a stack. The core of each of these individual cells is a polymer membrane, with a platinum-based catalyst on both sides of the membrane. Hydrogen is supplied to the anode, where it is broken down into protons and electrons.

The protons migrate through the membrane to the cathode, where they react with oxygen present in air to form water vapour. Meanwhile, outside the stack, the electrons supply the electrical power – depending on load point, the individual cell voltage is roughly 0.6 to 0.8 volts.

The fuel cell operates in the high-voltage range. The most important auxiliaries include a coolant pump and the recirculation fan – a turbo compressor that forces air into the cells, returning unconsumed hydrogen back to the anode and thus increasing efficiency. These components have a high-voltage electric drive and are powered by the fuel cell. Because the exhaust system transports only water, it can be made of lightweight polymer.

There is a separate cooling circuit for cooling the fuel cell. The unit, which operates at a temperature of approximately 80°C, places higher demands on the vehicle cooling than an equivalent combustion engine, but achieves greater efficiency, as high as 60 per cent – nearly double that of a typical combustion engine. Cold starting is possible at temperatures down to –28 degrees Celsius. A heat exchanger and a thermoelectric, self-regulating auxiliary heating element maintain comfortable temperatures in the cabin.

A special feature of the A7 Sportback h-tron quattro is its plug-in hybrid concept, a logical evolution from the Audi A2H2 and Q5 HFC test cars.

The demonstrator A7 h-tron is equipped with an 8.8 kWh lithium-ion battery from the A3 Sportback e-tron that is located beneath the luggage compartment and has a separate cooling circuit for thermal management. The high-performance battery makes the ideal partner to the fuel cell as it can store energy recovered from brake applications and supply considerable power for full-load boosting. On battery power alone, the A7 Sportback h-tron quattro can cover as much as 50 km (31.1 miles). Depending on voltage and amperage, a full charge takes between two and four hours.

The battery operates at a different voltage level than the fuel cell. For that reason, there is a DC converter (DC/DC) between the two components. This tri-port converter is located behind the stack. The power electronics in the front and rear of the vehicle convert the direct current from the fuel cell and battery into alternating current (AC) for the two electric motors.

The Audi A7 Sportback h-tron quattro is the first fuel cell car with quattro four-wheel drive. More specifically, it has an e-quattro drive with no mechanical connecting parts, as the front electric motor drives the front wheels; the unit in the back the rear wheels. Torque at both axles can be electronically controlled in the event of loss of traction and steplessly varied, with the e-quattro concept requiring precise co-ordination of the electric motors in order to provide the same sporty, stable and high-traction drive of a production car with mechanical quattro drive.

The electric motors, which together with the voltage converters are cooled by a low-temperature circuit, are permanently excited synchronous machines, each with an output of 85 kW, or 114 kW if the voltage is temporarily raised. Maximum torque for each is 270 Nm (199.1 lb.ft.). The electric motors’ housings incorporate planetary gear trains with a single transmission ratio of 7.6:1. A mechanical parking lock and a differential function round off the system.

The Audi A7 Sportback h-tron quattro offers the full performance of electric drive in conjunction with the advantages of the new e-quattro, with the silent thrust of the electric motors available in full from a standstill.

At full load, the fuel cell reaches maximum output within one second, more dynamically than a combustion engine because the entire drivetrain includes just a few mechanical parts.

The four hydrogen tanks of the Audi A7 Sportback h-tron quattro are located beneath the rear load space, ahead of the rear axle, in the central tunnel. An outer skin made from carbon-fibre reinforced polymer (CFRP) encases the inner aluminum shell. The tanks can store around 5 kg (11.0 lb) of hydrogen at a pressure of 700 bar – enough for a driving range of over 500 km (310 miles).

The tank flap is in the right side of the car, concealing a filler connector for the hydrogen. Fully refuelling with hydrogen takes around three minutes, roughly the same as filling a conventional car with petrol or diesel. The tanks communicate with the refuelling system via an infrared interface, indicating the pressure and temperature levels in each tank for optimal refuelling.

When the driver presses the EV button, the A7 h-tron drives solely on battery power. Switching from automatic transmission mode D to S increases the level of energy recovery when braking, so that the battery is charged up effectively during fast driving. Braking is also generally allelectric, with the four disc brakes only become involved if more forceful or emergency braking is required.

‘Fully refuelling with hydrogen takes around three minutes, roughly the same as filling a conventional car with petrol or diesel…’

‘The Audi A7 Sportback h-tron quattro has an e-quattro drive with no mechanical connecting parts, as the front electric motor drives the front wheels; the unit in the back the rear wheels…’

‘Mounted in the front of the car, the fuel cell comprises over 300 individual cells formed into a stack…’

‘Each of the two electric motors drive the wheels of one axle, providing quattro all-wheel drive and thus it is unique among fuel cell cars…’