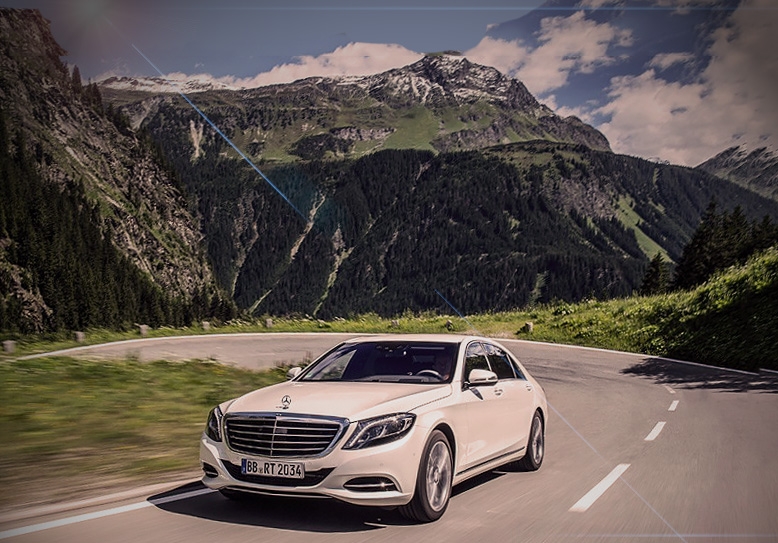 International launch drive – the greenest of them all – roadtest Mercedes-Benz S500 Plug-in Hybrid L W222. With the performance of a V8 petrol model and the fuel economy of an efficient turbodiesel, the high tech S500 Plug-in Hybrid breaks new ground in the luxury saloon market. The combination of a V6 biturbo and an electric motor gives the V8 model a good run for its money.

Official fuel consumption figures arc sometimes so skewed, they are almost irrelevant, and during real world driving a typical car owner newer gets close to what the manufacturer claims.

Everything is relative, however. On the second day of the S500 Plug-in Hybrid’s launch event, which was based in Copenhagen, Mercedes asked for volunteers to drive the calibration test car, and attempt to beat the test driver’s average real world consumption of 6.8 litres/100km (41.5mpg) over the 80-mile road route from Denmark to Sweden. Driving with light pressure on the throttle, I set out to maximise momentum, carefully reading the road to avoid slowing down and stopping unnecessarily. “The art of going quickly by never going slowly,” as the late, great LJK Setright used to say. 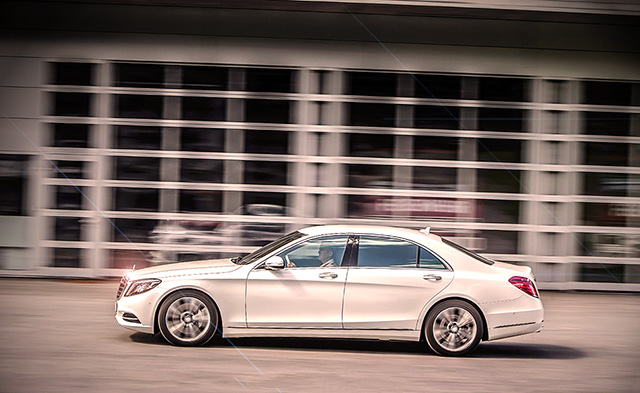 When we reached the route’s end at the coffee stop, the engineers told me that I had achieved 6.1 litres/100km (46.3mpg), beating the benchmark figure by around 11 per cent. The fact that I also arrived with more battery charge left than the test driver had was clear proof of the good working relationship I built with the car’s E+ driving mode, via the accelerator pedal with haptic feedback.

When you look at the pure numbers, the fuel consumption I achieved was more than double the claimed 2.8 l/100km (100.9mpg) official figure. But when you drive in the real world with traffic and traffic lights, things are quite different from the ideal environment of a laboratory where a rolling road is employed to simulate a driving test route. However, an S-Class is an S-Class, and the fact that you can now have a version that goes almost as hard as its petrol powered, V8 biturbo sister, the S500, yet sips fuel at a miserly rate with minimal emissions is the icing on the cake. 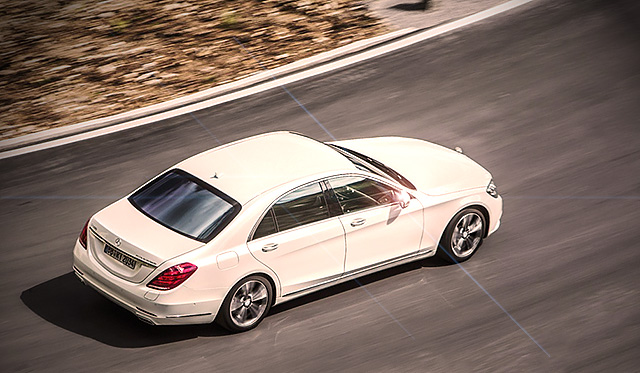 Having earned my credentials as the king of low fuel consumption for the day, I made sure that a brief return to form as a full throttle junkie was in order during the journey back to Copenhagen. Coming out of a T-junction onto a deserted country road, I applied full throttle, whereupon the electric motor seamlessly joined the smooth twin-turbo V6 to deliver an invigorating level of combined thrust that really did feel as potent as that from the V8. 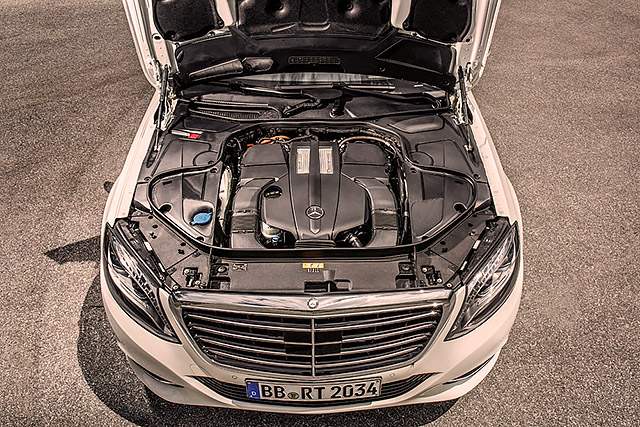 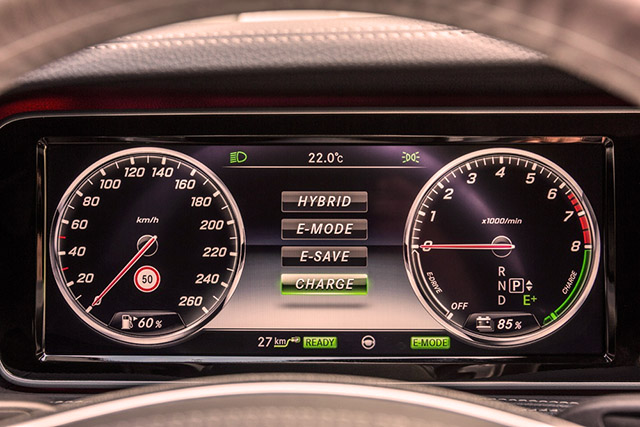 The V8 S-Class has always been the best all rounder, and nothing has changed with the 222-series generation. However, the combination of a V6 biturbo and an electric motor gives it a good run for its money. The S500 V8 reaches 62mph first, taking just 4.8 seconds. The Plug-in Hybrid manages it in 5.2 seconds, which is still faster than many 1980s supercars. Both S-Classes top out at an electronically limited 155mph.

The S500 Plug-in Hybrid’s 2,215kg kerb weight is responsible for its acceleration deficit, and it can only accelerate at full speed for as long as it has sufficient charge in its battery (to put owners’ minds at ease, Mercedes-Benz offers a six-year/62,000-mile warranty on Plug-in Hybrid components – the high voltage battery, electric motor and power electronics). 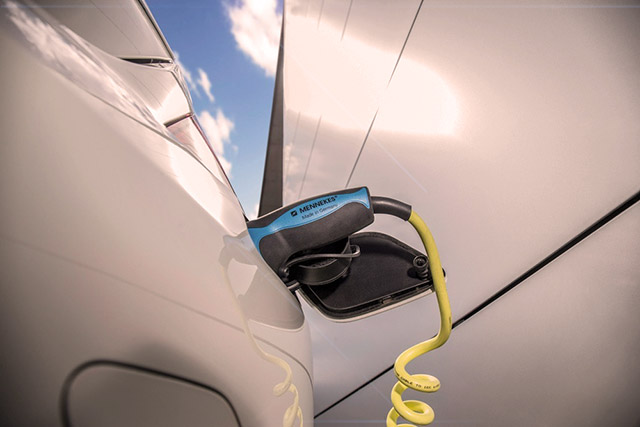 In electric mode, the top speed is 87mph, but you’ll get through the charge of the water- cooled lithium-ion battery very quickly. Stopwatch numbers aside, either car will waft you along on a wave of torque that perfectly matches the silken ride provided by the Airmatic suspension with Magic Body Control. Standard wheels in the UK are 19s, and this test car wore 8.5Jx 19 front and 9.5Jxl9 rear wheels shod with 245/45ZR19 and 275/40ZR19 tyres.

While prodigious torque is one advantage of a plug-in hybrid, its real raison d’etre is the ability to cover 20.5 miles purely on electric power. That and the 65g/km CO2 emissions more than qualifies this S-Class for free entry into low emissions zones like central London.

To prove how straightforward the S500’s ‘plug-in’ aspect is, we also stopped at a charging point. Inside a black bag Velcroed to the boot lining is an industry standard cable which can only be plugged into the car and charger one way. There is also an interlock system that secures the cable to the car’s rear bumper mounted socket when the central locking is activated. Thus, while a miscreant can detach the cable from the charger socket, they cannot run off with it afterwards.

The battery requires two hours to be recharged from 20 per cent by a 400V/16A wallbox, and 4.1 hours by a 230V/8A socket. In the future, induction charging will be possible, meaning you can simply drive into your garage and stop the car over an induction plate on the floor to begin recharging the battery.

According to Hybrid Powertrain Manager, Dr Uwe Keller, the W222 S500 Plug-in Hybrid’s batteries weigh 120kg, which explains most of the car’s 200kg extra weight over the S500 L V8. This changes the front/rear weight distribution from the S500 L’s 53/47 per cent, to 48/52 per cent. On a positive note, a rearward weight bias helps traction in a rear-wheel drive car.

Speaking of traction, a torque rich rear-wheel drive car like this one would find Scandinavian winters challenging, hence my question to the engineers about whether or not a 4Matic version of the S500 Plug-in Hybrid is on the cards, or indeed technically feasible. Yes, it is technically feasible, came the reply. AMG is set to double its sales in Scandinavia this year thanks to the introduction of 4Matic. If Mercedes wants to succeed with its hybrid cars in this market, 4Matic versions will need to be forthcoming too. And it is not just in Scandinavia. Canada, North America, Switzerland, Austria, Russia, and even Germany itself would all benefit from a four-wheel drive S500 Plug-in Hybrid.

I also asked Dr Keller if any changes were made to the S-Class’s structure to make space for the hybrid components. “As the car was designed with the W222 S300, S400 and S500 Hybrid models in mind, everything was taken into account from day one,” he said, before adding that there is 2km (1.2 miles) of normal wiring and 20m of high voltage cable in the S500 Plug-in Hybrid, compared with 1.8 and 3km (1.1 and 1.9 miles) of wiring in a normal S-Class saloon, depending on the options chosen by the owner.

Because of the relatively small battery in the engine bay, the S300 Hybrid (not sold in the UK) and S400 Hybrid are unable to run on battery power alone. However, this also means that the hybrid technology does not affect luggage space. Unfortunately, this is not the case with the S500 Plug-in Hybrid. While its mechanical and electronic aspects are second to none, the one fly in the ointment is the sacrifice of 135 litres of boot space to accommodate the batter); reducing the total boot capacity from 530 to 395 litres. Dr Hermann-Joseph Storp, Director of Development for the S-Class, explained that as battery technology improves, Mercedes intends to use it to extend range rather than to recover missing boot space, presumably because it does not consider less boot space a problem for buyers of these models.

TheS500 Plug-in Hybrid has four driving modes: Hybrid, E-Mode, E-Save and Charge. The car always starts in Hybrid mode and the driver can select the others from there. If you press the E+ button on the centre console when in Hybrid mode, the computer maximises energy recovery in the acceleration and braking phases, offering the greatest potential for optimum economy. This was the mode I used when driving the calibration car.

A highlight is the route based operation strategy using active route guidance. Using GPS and radar sensors, the system knows

the road ahead and calculates when it is best to use electric power alone, or the engine as well, and when the battery will need recharging, in order to optimise energy recovery and electric assistance. The radar based part of the system helps efficiency and recuperation by reminding the driver to lift off the throttle when approaching a vehicle ahead with a double pulse through the haptic accelerator.

Using the ‘Connect me’ smartphone or iPad app, you can preheat or pre cool the car’s interior using the heating, air conditioning, and seat heating and cooling, well ahead of your drive. Doing this while the S-Class is plugged into the mains also means the car’s battery is not required for these tasks, saving energy at the start of a journey.