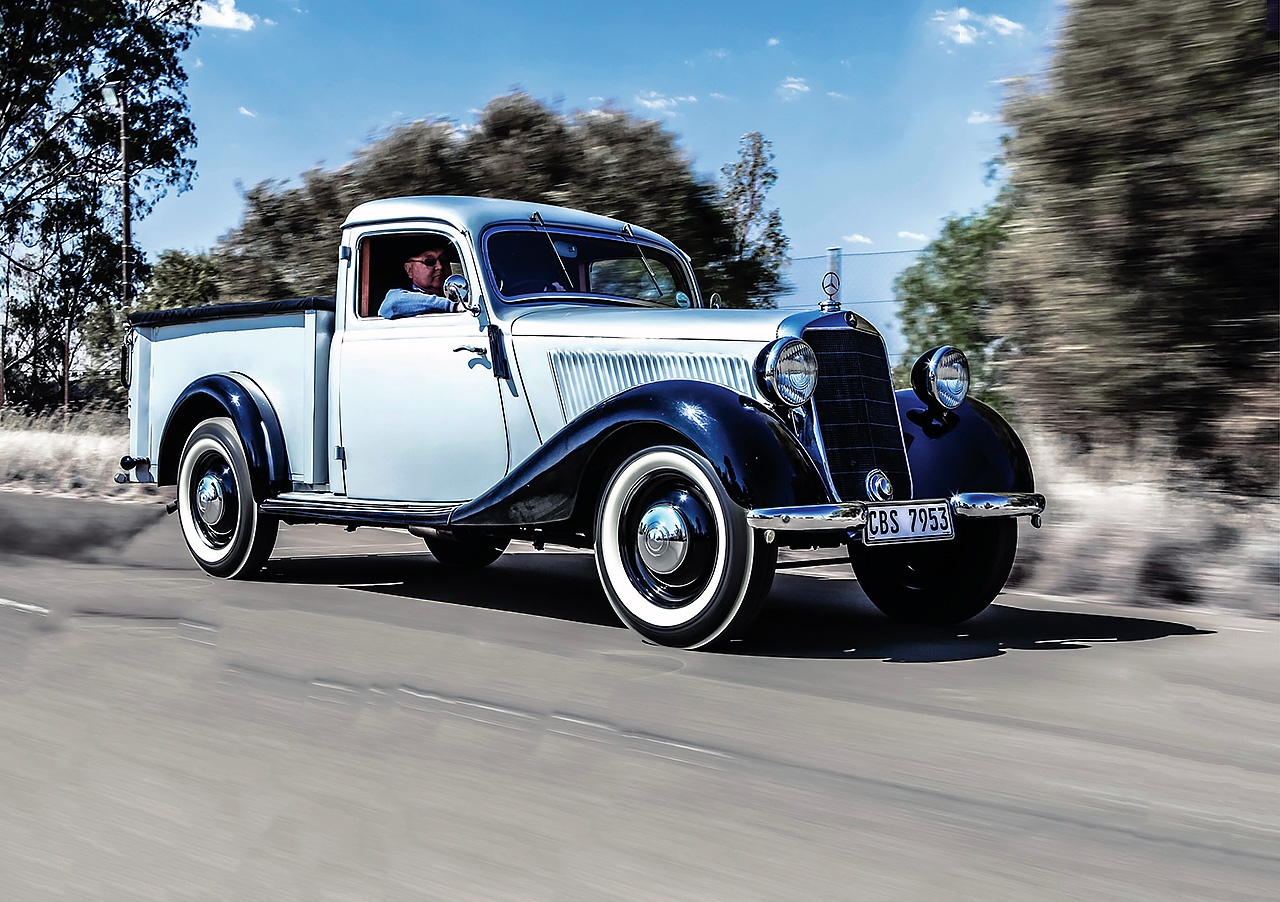 Bakkie to the future – classic choice – 1951 Mercedes-Benz 170Da pickup W136 road test. Restored and now enjoying easier life in the 21st century, this 170 diesel ‘bakkie’ fuels its owner’s admiration for its kind. It is not often that you leaf through several books dedicated to Mercedes-Benz and don’t find a single word on the model you have just driven. But this was exactly the predicament I faced after experiencing the 170Da pickup, or bakkie, pictured here.

There is a reason for this, though. When these vehicles were imported to South Africa as chassis cabs, they were also called ‘half cars’, as the imported product consisted of the front pan of the vehicle, up to the B-pillars. Also referred to as ‘SKD’ (semi knocked down) units, it was up to the South African market to find a manufacturer to build the loading bay. With hindsight, it might not be the most romantic way for a Mercedes-Benz to be manufactured, but today these cars are relatively sought after by South African enthusiasts and collectors, partly because they are a local product. 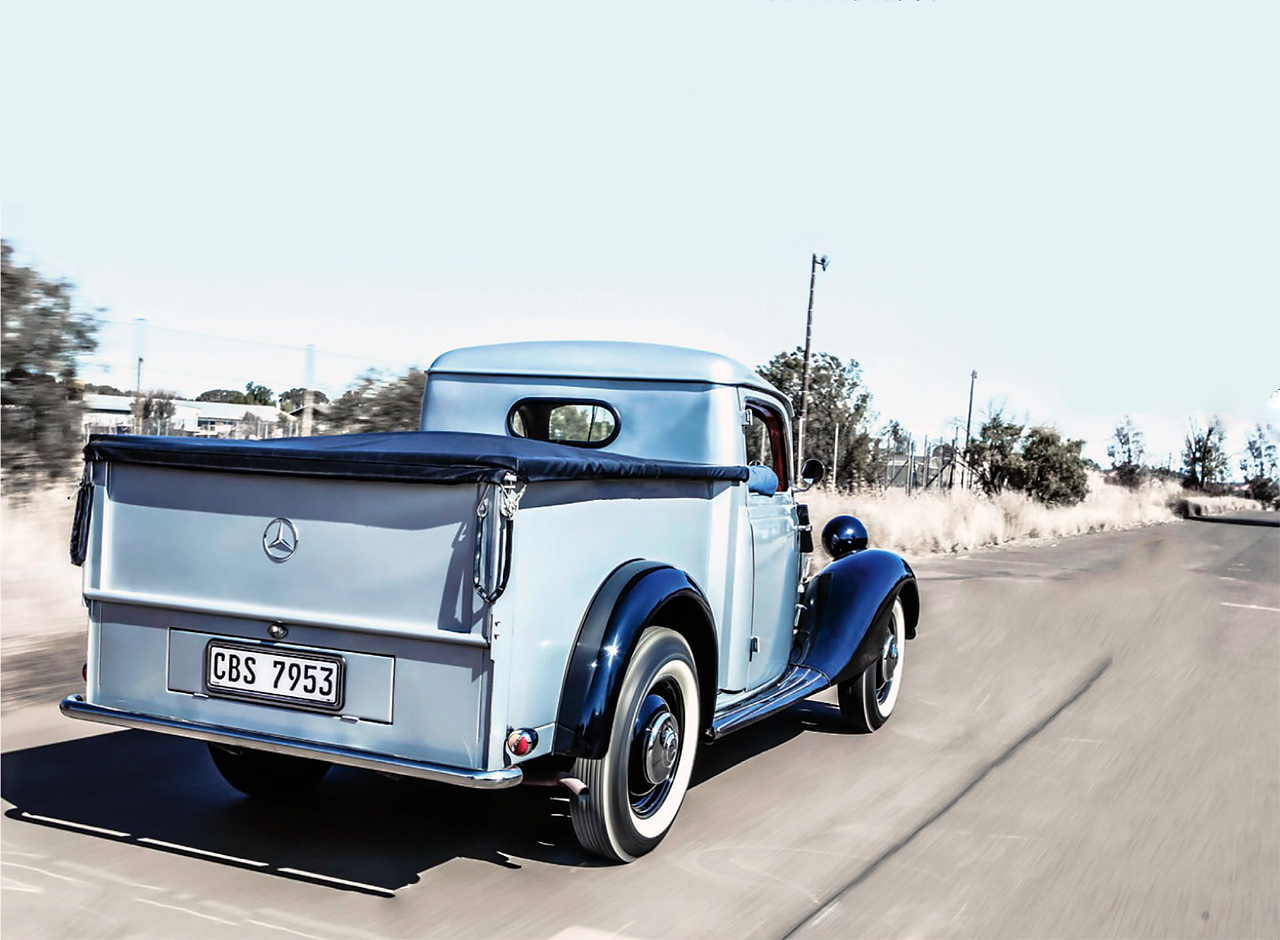 The idea to import the chassis came from a Mercedes-Benz dealer. As the finished products would be classified as commercial vehicles, they would not be subjected to the same import rules as those for normal cars. According to the late Fred Schnetler (one of the most respected South African motoring writers) in his book Progress, Passion and People, it was Heinz Grossman, a service engineer at Mercedes-Benz’s head office in Johannesburg, who helped bring the project to fruition. Obviously Daimler-Benz also put its weight behind the project, as it was keen to increase sales.

Eventually, Morewear Industries in Germiston (situated outside Johannesburg) fitted the chassis cabs with load boxes. The aim was to offer a high quality product, as both businessmen and farmers would be using the pickup daily. How appropriate then that this 170Da now resides in the collection of a retired farmer and businessman.

BACK TO ITS ROOTS

As I walk around the 1951 170Da for the first time, monochrome images of the vast South African countryside pop into my head – locations that would have suited this car. At the time, it still took two or three days to drive the 870 miles from Johannesburg to Cape Town, a trip that can now be done in less than 15 hours. This vehicle is from a time when a one-tonne passenger pickup was a foreign concept.

This 170Da originated in Namibia, then called South-West Africa. The previous owner had purchased the Mercedes-Benz bakkie when it was in a totally dilapidated state. As I look at one of the pictures taken before the restoration project started, it is hard to imagine that it was even possible to consider restoring such a wreck.

The car’s current owner saw it for the first time when its previous keeper was about to embark on this nut-and- bolt restoration. He asked him politely if he could buy the bakkie once the restoration was complete.

Understandably, the restorer didn’t want to part with the vehicle so soon. After the work had been completed, he drove it to the Mercedes-Benz Club of South Africa’s Annual General Meeting (AGM) with the expected fanfare and admiration received along the way.

The 500-mile trip from Hartenbos, situated on the South Coast, to Bloemfontein, the capital of the Free State, took three days to complete. Eventually, in 2009, the restorer became fascinated by another car, and felt the 170Da would get more exposure in the present owner’s extensive Mercedes-Benz collection. This resulted in ownership being transferred.

As the owner and I walk around the car, he points out one feature that is not standard. To make the car roadworthy in South Africa, the car must have side indicators, so, apart from the pop-out original indicators that the bakkie still proudly wears, additional indicators have also been fitted and they don’t look out of place.

When the 170Da was purchased new, it was fitted with black tyres, but the current owner decided that whitewall tyres, measuring 16 inches, would give it a more vintage look. The wheels also feature the correct wheel hubs with the old, smaller Mercedes-Benz star on the caps. Another highlight is found at the front of the car. The heavily louvered engine covers give a false impression that there might be some powerful motor lurking underneath. However, pull the spring loaded metal pins, open both covers and you are greeted by a modest, 1.8-litre, four-cylinder diesel engine. 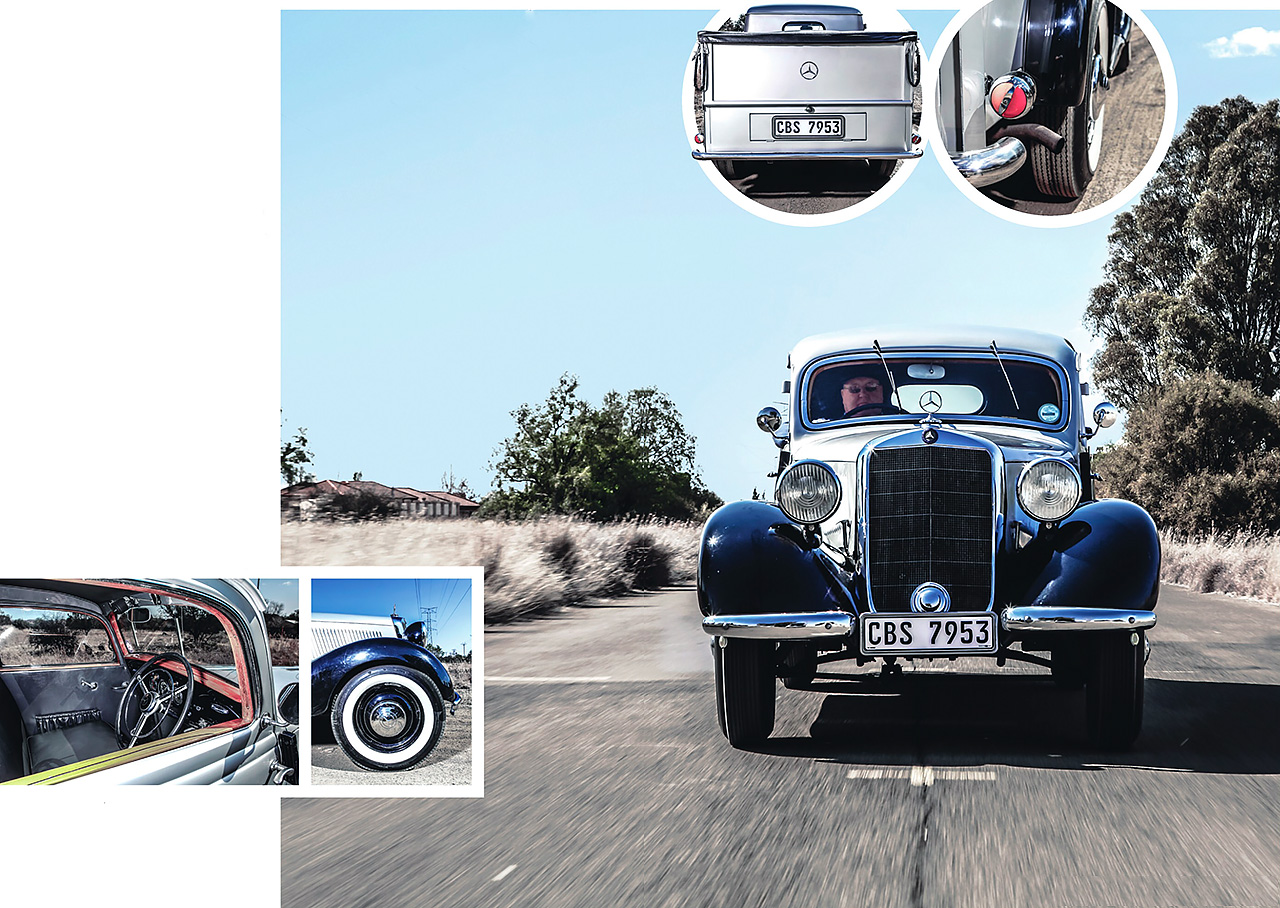 Open both bonnet covers and you are greeted by a modest 1.8-litre, four- cylinder diesel engine. 19:1 compression ratio for the 1,767cc, two-valve diesel. Split tailgate; extra wheel camber seen without a load. Indicators make this classic Mercedes road legal in SA. The current keeper added these whitewall tyres. Wood frames the side windows and windscreen.

I open the door (backwards) with the small but solid lever situated next to the front of the A-pillar, and immediately notice the leather strap on the inside, low down on the B-pillar, which pulls tight as you open the door. Once seated on the front bench, I realise how small the cabin is, especially when snapper Kian Eriksen climbs on board too!

The cabin is elementary in its layout, and it is the wood surrounds of the door windows that contribute to the vintage aura. The view through the windscreen can be compared to that of a 170 passenger car of the time, especially when taking into consideration the narrow bonnet with the individual headlights situated on the front wings.

In the centre of the cabin, just above the windscreen, is the button for the wipers. There are also instruments for the fuel tank and even a clock, all with chrome surrounds and all situated in the black metal dashboard. The huge steering wheel helps with leverage, while seeing a steering column running all the way to the footwell is rather captivating.

To start the engine, I need to turn the key on the right of the steering wheel, and then push upwards a small chrome lever located on the left of the steering column. The engine catches quicker than I had expected, and immediately the loud, clattering sound of an old diesel motor engulfs the cabin, transporting occupants straight to more primitive days of diesel combustion technology.

The footwell between the front occupants is divided by a thick and angled gear lever, which is not unlike that of the 1935 130 I recently drove. I expected a cumbersome gearshift action, but as I engage first, the lever moves easily and we are off. Reverse gear is hard left and up. 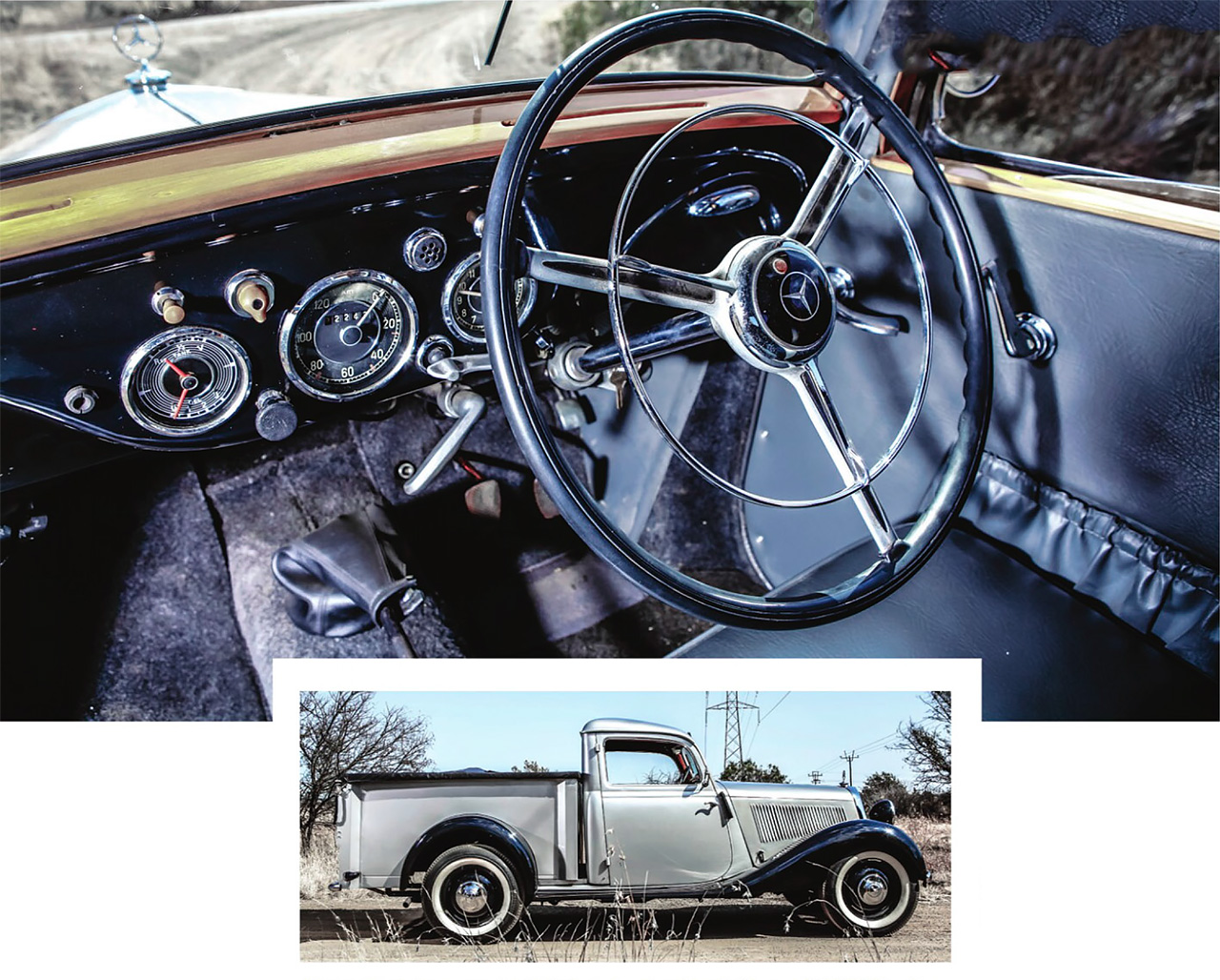 Upper and lower transverse springs for the front axle, and a swing-axle at the rear of this 1950s Mercedes.

STEADY AS SHE GOES

First gear is very short and moments later I move the lever down and into second. I giggle at the speedometer’s needle, which barely moves, but once I press the clutch pedal again and push the lever across the gate into third and then fourth gear, we surge towards 30mph. Flow slow life in general must have been back when this car was new! As I’m over six feet tall, the top of my head just misses the roof lining, but my field of vision includes the upper part of the windscreen and lower part of the roof. Later, as we finish taking the necessary photographs, I watch as the owner relaxes behind the wheel, cruising along with one elbow draped over the window sill. A better driving position for this Mercedes-Benz, there is not. In the harsh, midday sunlight of the Free State, the contrast of the car’s two-tone silver and black paintwork is most prominent and, although not original, somehow does the bakkie’s shapely form complete justice. Purists might disagree and suggest that the metallic shade is slightly more shiny than the original colours, but it is something you only notice at close quarters. There is one similar design trait that the 170Da shares with modern pickups. Viewing the rear dead on, I notice how the wheels display moderate positive camber, the idea being that once a load has been added, the wheels will straighten up as the suspension compresses. 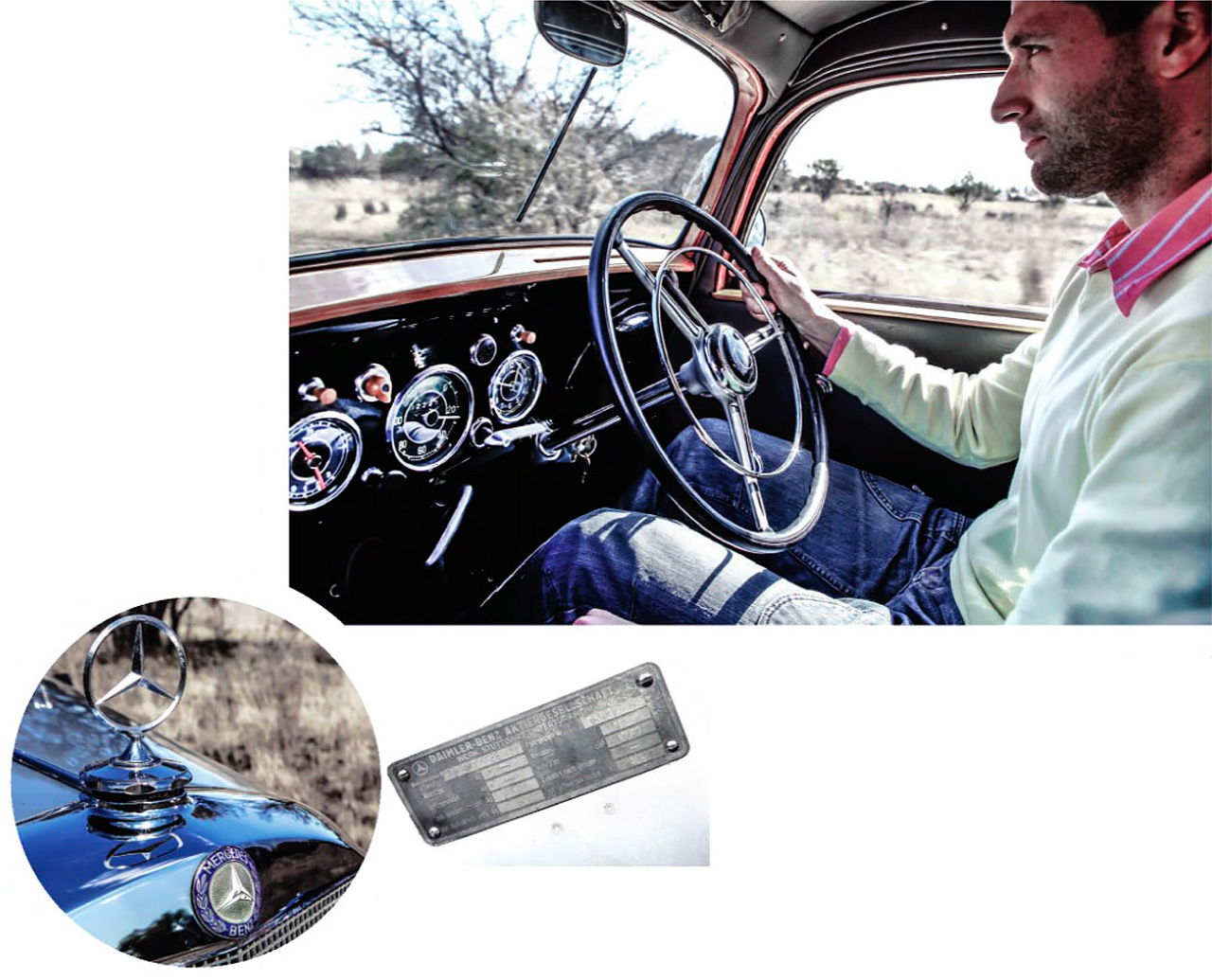 A neat trick by the restorer was to install additional gauges in the glove compartment to the right of the steering wheel, providing the driver with added information about the engine’s water temperature and oil pressure. These are vital in parts of South Africa where summer temperatures can reach almost 40C. After turning onto the driveway of the owner’s residence, I park the bakkie and pull a black lever to switch off the engine. I reach forward for the door handle and push the door open, taking care to avoid scuffing the narrow sill. If you don’t look towards the rear, this car could be any other well kept 170Da. But what a lovely little vehicle this is. Although a rudimentary design by today’s standards, the car is proof of Mercedes-Benz’s foresight to acknowledge the importance of economies of scale – to use a single chassis for multiple applications. It leads me to wonder what a C-Class based pickup would look like – dashing, I suspect.

One of Mercedes lesser known models, exported to South Africa as ‘half cars’ and given a pickup rear end Figures tor a standard Mercedes-Benz 170 Da, on which this model is based; fuel consumption determined at 3/4 of top speed (not more than 110km/h. 68mph) plus 10 per cent.

How this bakkie looked before and after the restoration.