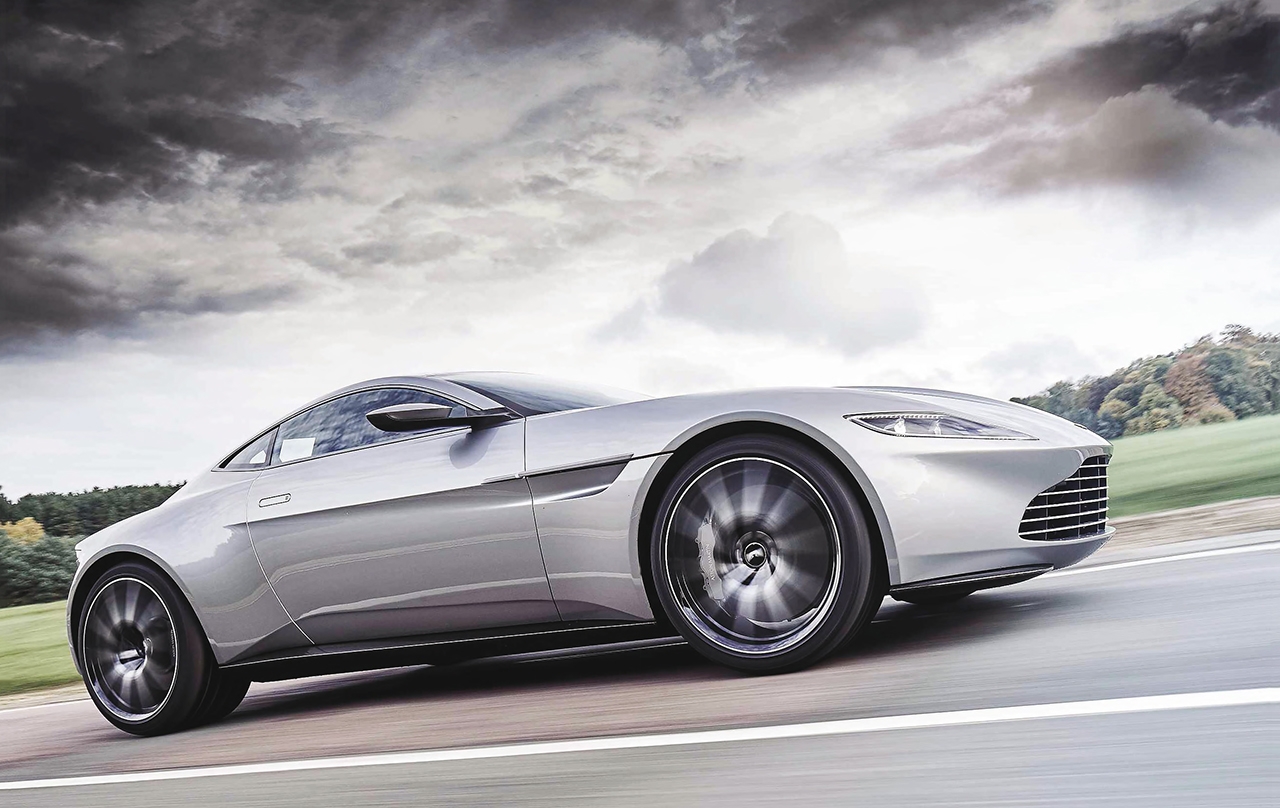 The time has long since passed when you could separate – James Bond and Aston Martin. Sure, other brands have bought their sprinkle of Fleming fairy-dust, large cheques exchanged for supplying 007’s company wheels, but nothing feels or looks so right as the world’s most famous secret agent behind the wheel of an Aston. This was confirmed to me a few years back at an early screening of Skyfall, when the entire audience spontaneously cheered as the DB5 made its first appearance. Cars shouldn’t have that effect on cinema-goers, but Bond’s car, or more specifically, Bond’s Aston, is different.

Every other automotive brand would kill for that kind of kudos, but it undoubtedly comes with its own issues. Chief among them is how to outshine a 50-year-old icon that’s cooler than Connery and Craig combined. Until recently the simple answer was you couldn’t. At least not if your Bond is Timothy Dalton or Pierce Brosnan and the cars in question are fitted with gadgets more appropriate for Action Man than 007.

It’s appropriate – and perhaps no coincidence – that the Craig-era Bond, with its emphasis on edginess rather than cheesiness, has seen a return to form for the films in general and the cars in particular. The DBS in Casino Royale looked and sounded perfect, while Skyfall saw a welcome high-profile role for the DB5. For Spectre, Bond could have quite easily found himself in a current Vanquish. That’s certainly what most of us were expecting, but then news broke that the next Bond Aston would be something all-new. Something called ‘DB10’. 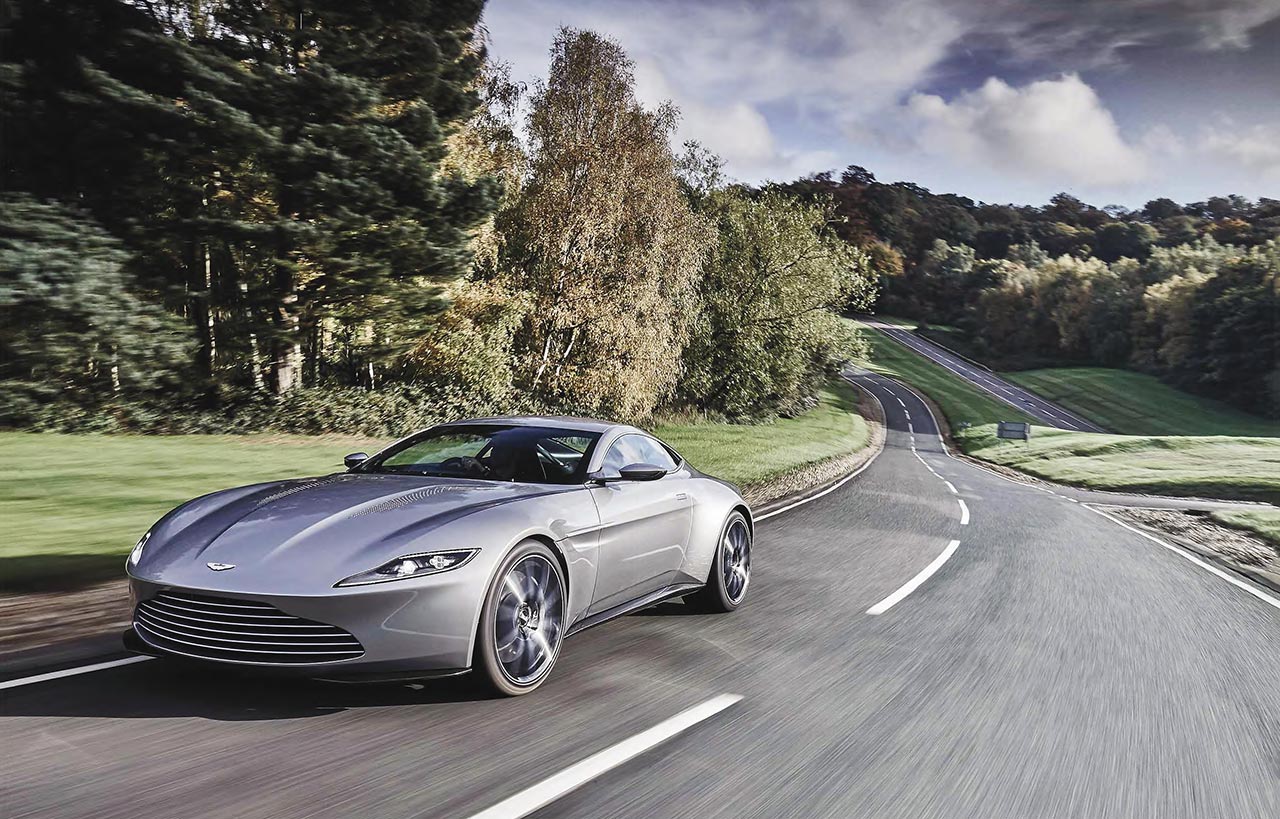 To say the DB10 was created specially for Bond from scratch would be stretching the truth a little (see ‘Building the Bond Cars’, but the fact remains that this spectacular new car takes Aston’s relationship with Bond to a whole new level. Hand-built in a strictly limited batch of just ten cars, and so exclusive that it was never intended for sale, the DB10 is in many ways the ultimate contemporary Aston. It’s even built by a department called Q Advanced Engineering, for heaven’s sake. Life imitating art? You certainly couldn’t make it up. 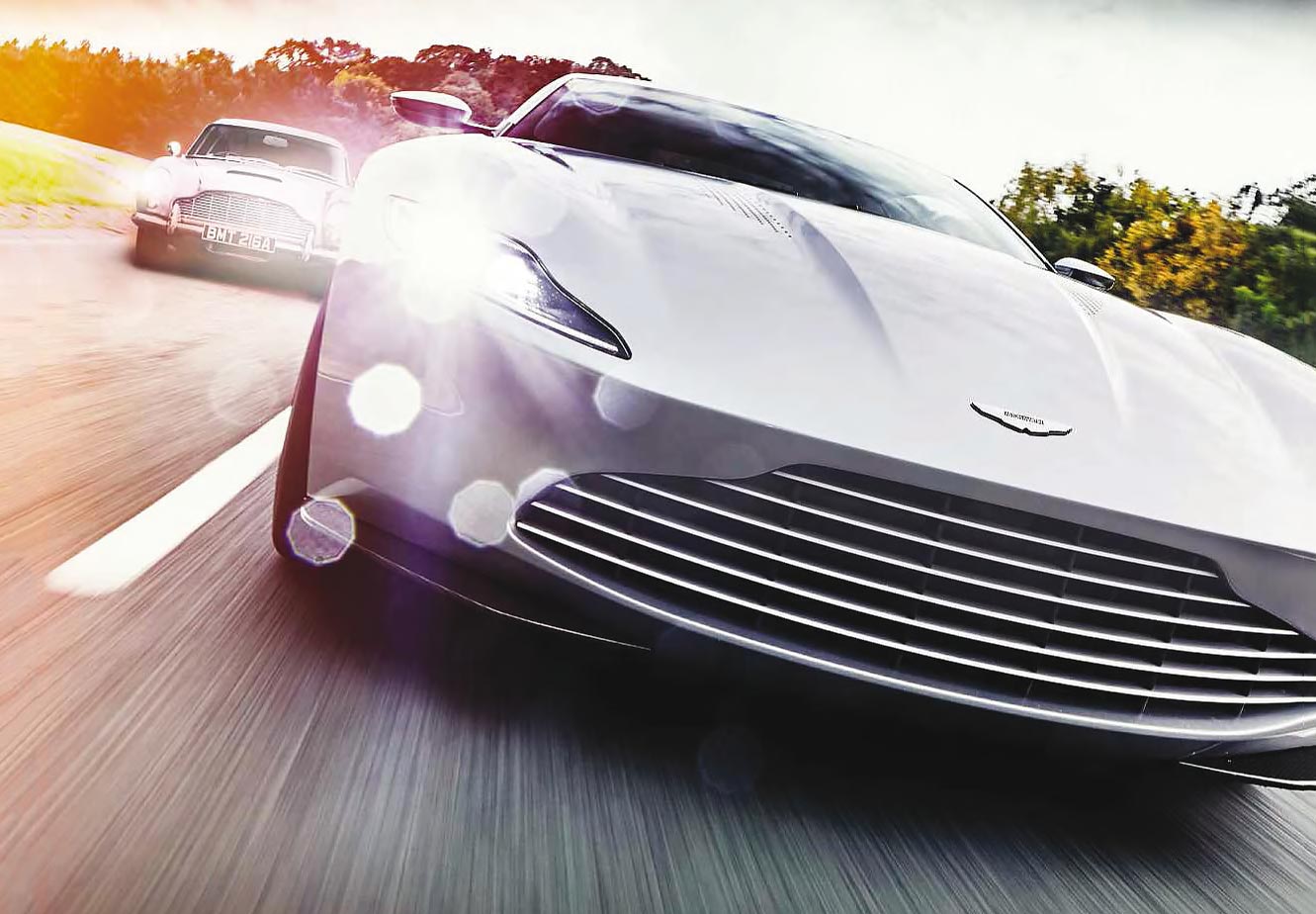 Vantage magazine’s audience with the DB10 comes the day after the London premiere of Spectre. No movie franchise creates the same buzz as Bond, so we’ve been well aware of what the car looks like for months, but when the tail-lift drops and the DB10 emerges it’s impossible not to be a little bit starstruck. Then the Skyfall DB5 rolls out to join it and things get a little bit surreal. If you believe 007’s cars are as big a part of Bond films as the man himself, this is the equivalent of meeting Sean Connery and Daniel Craig at the same time.

Sadly I’m not going to drive the DB5 today – it’s here for its supporting role in our cover shoot – but it speaks volumes for the DB10 that it’s the new car that draws me towards it with greater insistence. It really does have incredible presence. Broad and smooth, with welcome hints of One-77 in the muscled physique, it’s a genuinely fresh take on what a modern Aston should look like. The narrow headlights, large grille and plunging nose still have a slight eyes-too-far-apart awkwardness, but this is born largely, I suspect, from unfamiliarity and the absence of the front numberplate.

We shouldn’t forget that all concept cars (and to all intents and purposes, this is a concept car) exist to challenge preconceptions and give our eyes something fresh to admire and interpret. The DB10 does that job brilliantly. That it is also a very clear indication of Aston’s next-generation aesthetic is hugely exciting. I certainly can’t wait to see the Aston Martin DB11.

What’s it like to drive” Well, as with all film cars, the DB10 is not all it appears. The carbonfibre skin is all new, but what lies beneath is a stretched and widened V8 Vantage. Some 65mm longer in wheelbase and 60mm broader in track, the DB10 really does fill the road in a way no Aston short of the One-77 has done before, yet, despite the increase in size, it still looks as tight and compact as a clenched fist. 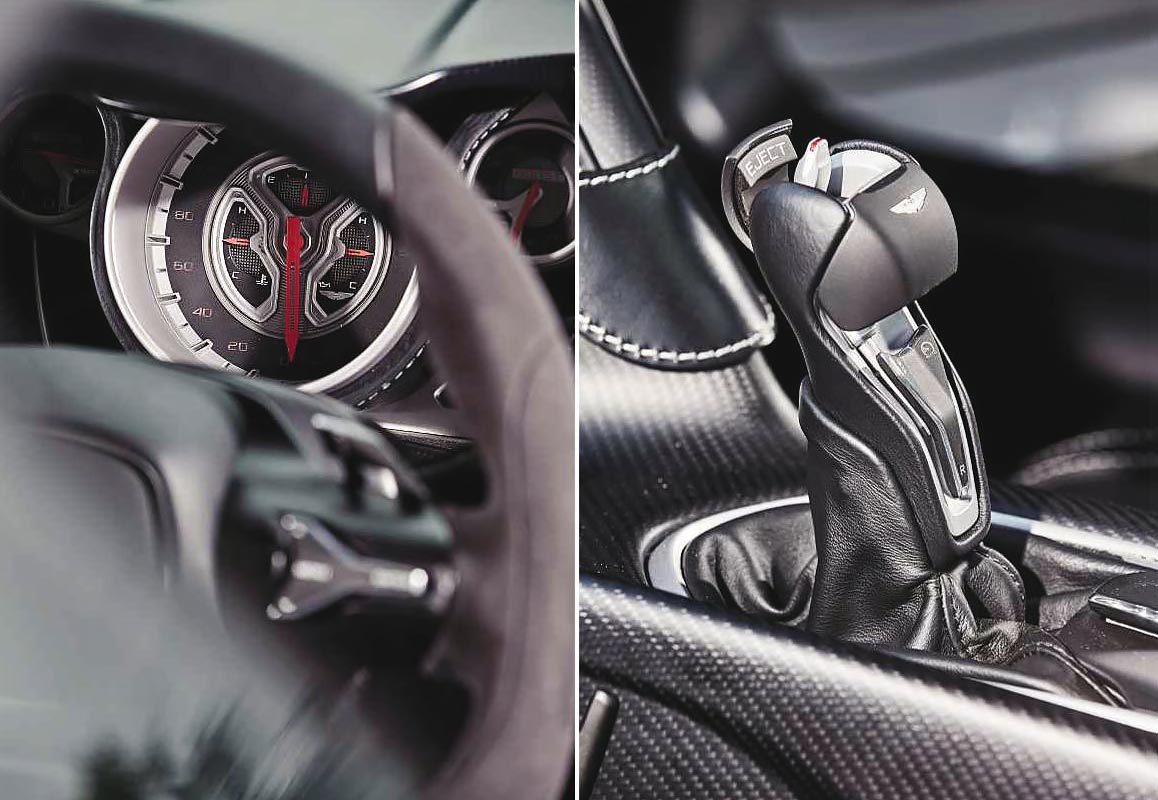 Anyone versed with the Gaydon-era cars will recognise the trademark lolly-stick door release. Push on the right-hand end and out pivots the left. Tuck your fingers behind it, pull gently and out swings the swan-wing door. So far, so familiar. Yet what this door opens onto is an all-new interior that moves the game on as far as the bodywork. Settle into the driver’s seat and once you’ve allowed yourself a smile and gleeful chuckle at the fact you’re sat where Daniel Craig has sat, you instinctively reach out and grasp the steering wheel. An evolution of the hexagonal ‘wheel seen in the current Vanquish and more closely related to that found in the Vulcan, it looks and feels perfect. Your hands fall so naturally on the flat facets of the rim that it immediately removes any misgiving that steering wheels really ought to be round.

The instruments and switches are all-new and, for the most part, non-functioning, though their positioning has clearly had a lot of thought put into it. A large, centrally mounted speedo with increments to 220mph is flanked by a pair of satellite dials, tacho on the left and a boost gauge (hinting at Aston’s Mercedes-powered turbocharged future) on the right. The smaller gauges are perhaps a little too small to read easily, but there’s no question that, collectively, the dials and general ergonomics would look absolutely splendid in a production car.

Extensive use of carbonfibre, all wearing a luscious satin finish, gives the interior a modern, flowing feel. Bold use of stout saddle-leather strips that loop and wrap key areas of the interior provide the perfect contrast and showcase the craftsmanship for which Aston has become renowned. 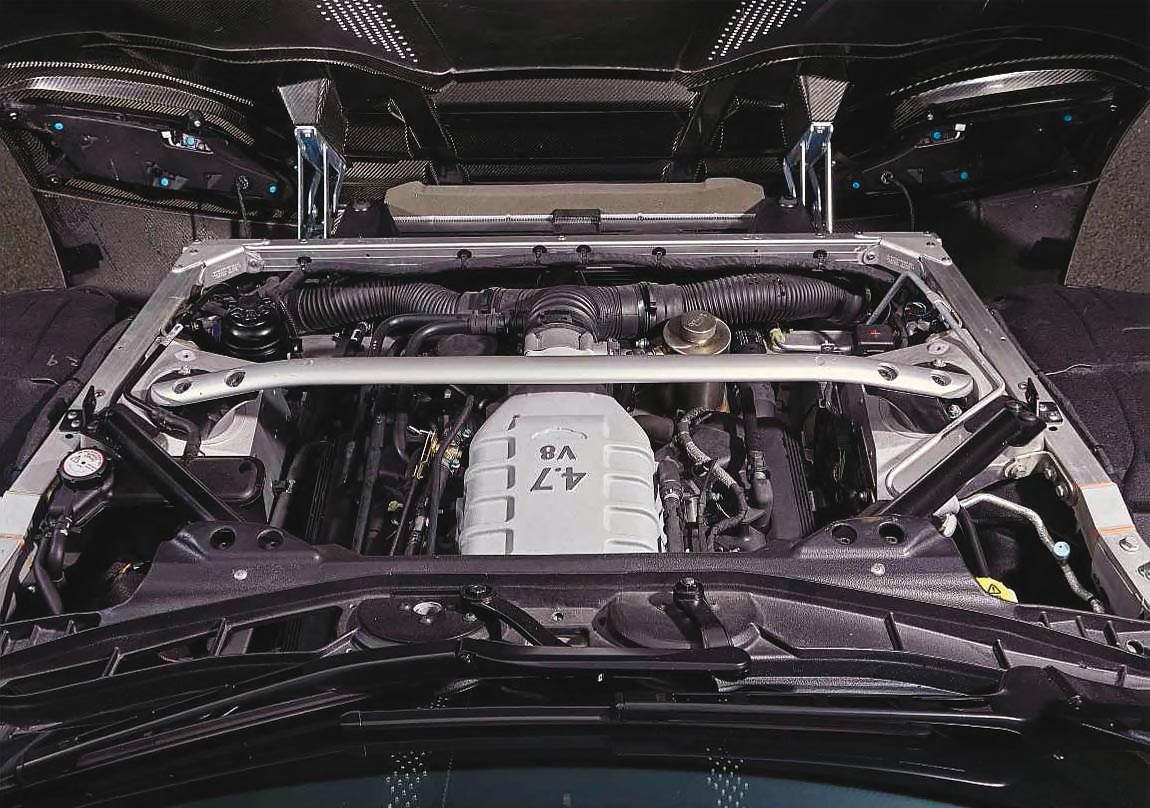 Opposite and above. As with the exterior, the DB10’s cabin is said to give a taste of the design direction of the next generation of Astons, though alas the button for the ejector seat is unlikely to join the options list. Engine is stock Vantage V8.

Left and below. Vantage’s Meaden drives the DB10 on the Hill Route at the Millbrook Proving Ground. While its concept car roots are apparent, it feels pleasingly. 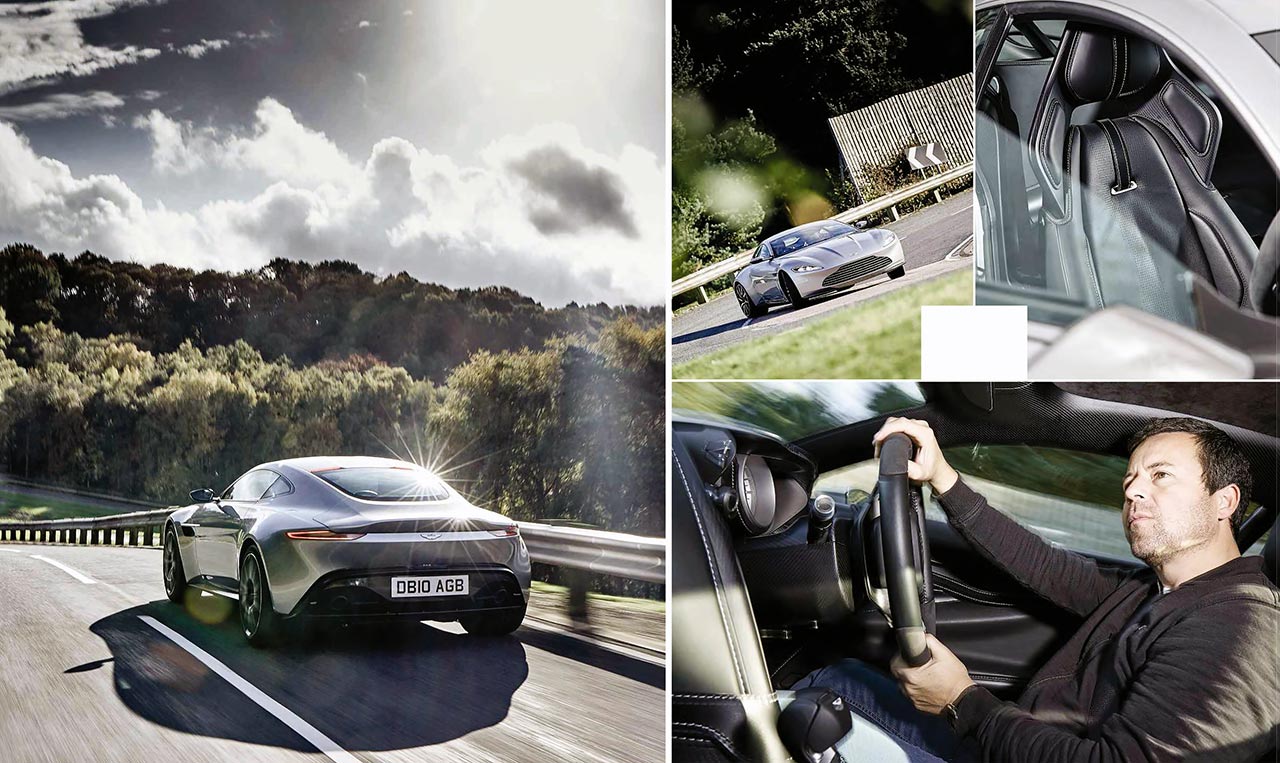 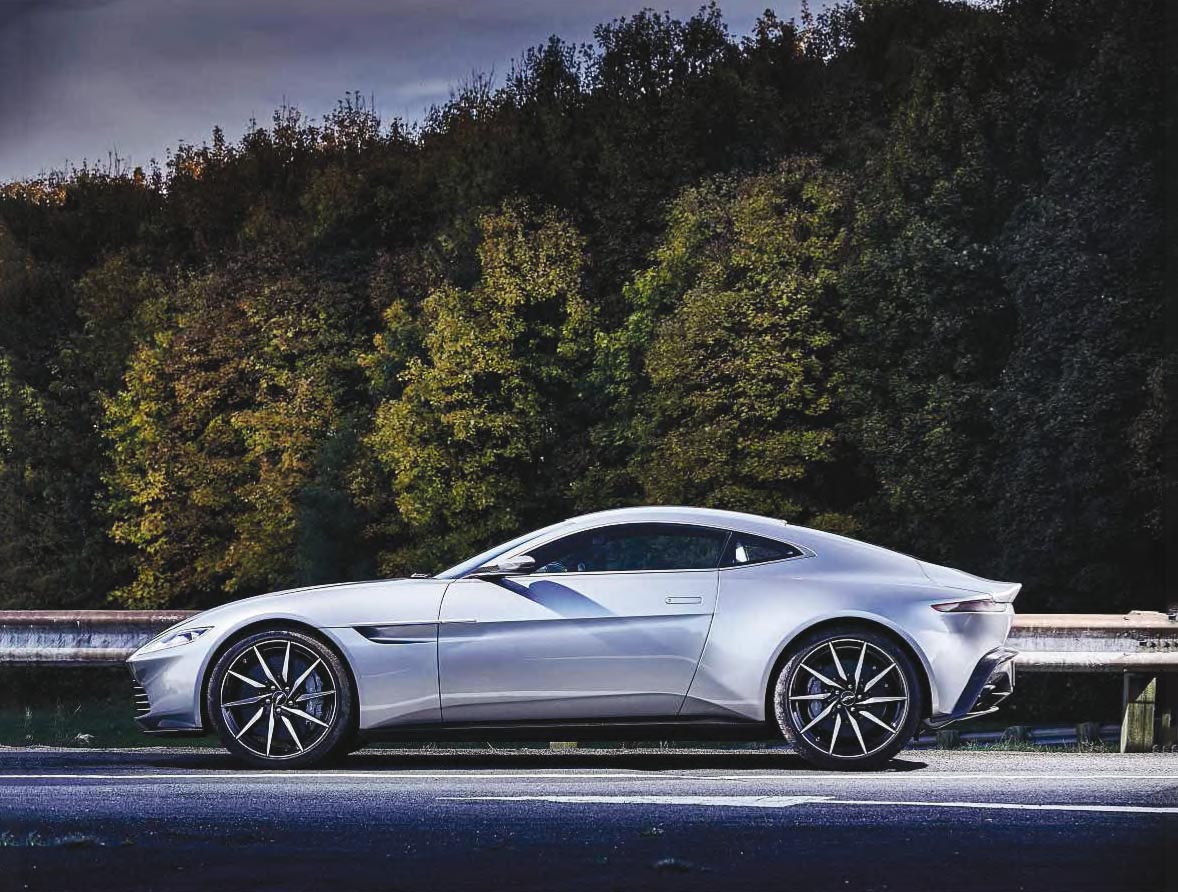 Above. The DB10’s aggressive stance, minimal overhangs and muscular surface treatments are all big visual clues to the next generation of Aston Martin road cars.

Perhaps the biggest surprise is that the DB10 is manual. Apparently Sam Mendes (director of Spectre and Skyfall) wanted Bond to drive a manual car as it made a more authentic connection to the DB5. It certainly pleases me, that’s for sure. You don’t start the DB10 with a key, rather via a clunky box of tricks lying in the passenger footwell. It’s not quite in keeping with the super-slick surroundings of the DB10’s interior but, once you’ve depressed the clutch, flicked the ignition and starter toggles and woken up the 4.7-litre V8, none of that matters.

The gearlever itself looks more like a selector for an automatic transmission, but it slides through its H-pattern gate slickly enough. There’s a piece of clear tape across the top, which looks a bit odd, but then Aston’s PR man says, ‘Ooh, I forgot, the premiere was yesterday, so I can take this off…’ before peeling back the tape and inviting me to flip the top of the gearlever forwards to reveal the one option every Aston owner secretly covets, but can never have: the trigger for an ejector seat.

With the V8 warm and Millbrook’s spectacular Hill Route (the location where the DBS’s record-breaking roll was shot for Casino Royale) ours for the afternoon, it’s time to take the DB10 for a drive. Unlike the interior and exterior styling, dynamically this car isn’t representative of anything in Aston’s future, though it does feel far more together than you’d ever imagine for what is, effectively, a moving film prop. The suspension is firm and noisy, with plenty of rough edges, but the steering has that characteristic Aston weight and feel, so you feel instantly connected.

I’ve driven countless laps around the Hill Route, but it’s never less than daunting, with crests and dips and crazy cambers, all designed to wrong-foot cars during their development programmes. Aside from the occasional scuff and rub from its ample tyres rubbing a wheelarch liner through the most severe compressions, the DB10 feels unfazed by the challenge. Perhaps the only significant thing gleaned from the drive is that although the styling does an excellent job of concealing the car’s increased width, you do sense the added breadth of its shoulders and hips as its huge rear tyres clip the cats-eyes.

On the positive side, the more foursquare footprint does give the DB10 a terrific stance and a planted feeling as you slice through corners. Truth be told, the V8 doesn’t quite have the guts to readily stretch and exceed the limits of this abundantly grippy chassis, so it takes more commitment than I’m prepared to show this priceless piece of movie memorabilia to get the rear tyres smoking. A V12 would have been more the ticket, but the big motor took up valuable space in the engine bay needed for stunt car control gubbins. Hats off, then, to stunt driver Mark Higgins for making the DB10 dance so spectacularly for the cameras.

As you can imagine, it’s been great fun to get first-hand experience of this latest chapter of the greatest partnership in cinema. To drive the DB10 is special enough, but to look in its mirrors to see the DB5 tucked in behind is something that will live in my memory for a very long time.

Jaguar Land Rover might tell you it’s good to be bad, but, take it from me, it’s always better to be Bond.