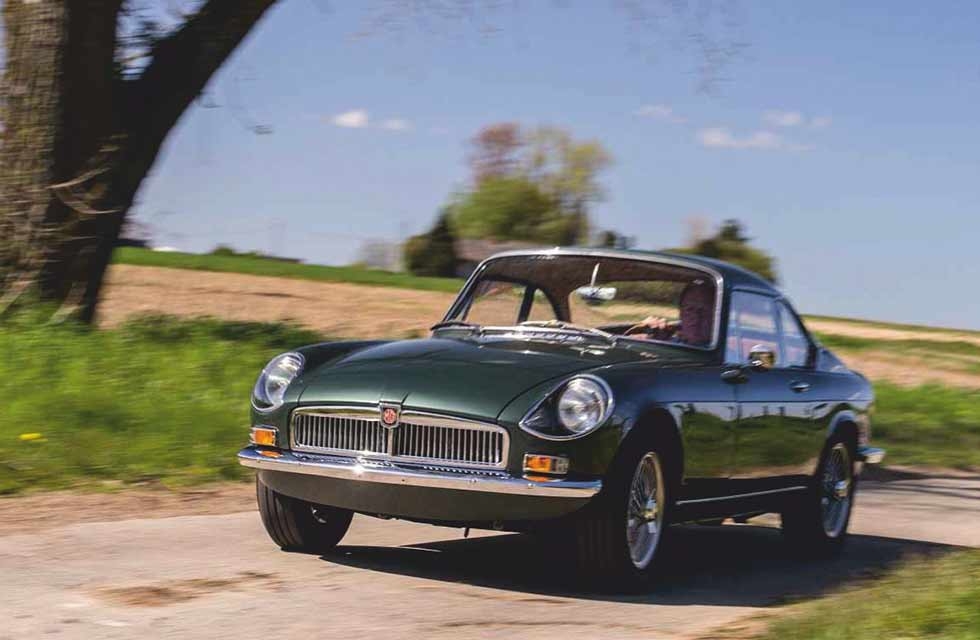 The MGB was launched only as a roadster, so Belgian coachbuilder Jacques Coune developed his own GT – and inspired MG in the process. Words John Simister. Photography Dirk de Jager.

HERE’S ONE THEY MADE EARLIER

An MGB with a solid roof. You could argue that it misses the car’s point, which is to be a goodlooking sports convertible with a surprisingly rigid structure, but the lure of a low-cost coupé was never far away when MGBs were still in the new-car price lists.

How best to achieve a solid barrier between self and sky, then? A factory hardtop, perhaps, preferably in a warm white if your B is red so you can ape the cars of BMC’s competitions department. Maybe an aftermarket hardtop by Lenham to give a fastback look, or a ‘Bermuda’ from Classic Motor Crafts with skylights, a concave rear window and an unmatched level of visual awkardness. Or, most sensible of all, buy an MGB GT, styled by Pininfarina and available from the end of 1965. It’s still a handsome machine, and a good one remains reassuringly inexpensive.

In the MGB’s earliest years, though, with the GT still on the drawing board, there was another route if you didn’t mind paying almost twice as much as you would for a new roadster. British buyers didn’t really know about it, but mainland Europeans did. It was the creation of Jacques Coune, a Belgian retailer of exotic Italian machinery from Abarth and Iso – who also had a very capable bodyshop.

In 1963 he and his band of Brussels-based Italian craftsmen, enjoying better wages than they would earn back home in Turin, came up with a fastback body whose cut-off tail had the look of a Ferrari 275 GTB, right down to the round tail-light units – sourced in this case from a Simca 1000. The MGB’s reinvention as a coupé went a lot further than a roof and a new tail, however. Coune and his artisans sleekened their MGB Berlinette’s nose by moving the headlights back, lengthening their nacelles and enclosing them under Perspex covers. All four wheelarches gained lips, and a deepened windscreen sat atop a newly reshaped scuttle panel, its top edge sitting rather higher than the tops of the standard-height side windows.

That’s a lot of expensive new metalwork, so expensive that only the first six Coune MGBs, of which the 1964 car you see here is one, had their new panels formed in steel. The following 50 cars used glassfibre, their bodies converted by Belgian company APAL near Liège, which later made neat Volkswagen-based sports coupés under its own name. But once MG had launched its own GT, the Coune interpretation’s reason for existence was largely scuppered. Just one right-hand-drive Berlinette was built, another 1964 car originally supplied to BMC and acquired in 2007 by the Coune family.

Seen from the rear, or even from the side, the Berlinette comes close to denying its MGB genes. The high, stubby tail with its little spoiler, the chopped-off corners of the rear side windows: these are not the sort of styling features you would see circulating around a BMC design studio. Move around to the front, though, and the grille, the bonnet and the chrome scuttle vent make the roots obvious.

‘ISSIGONIS SAID IT LOOKED TOO ITALIAN. AS BACKHANDED COMPLIMENTS GO, THAT’S A GOOD ONE’

They also bring context back to the step along the flanks (hidden by a bright metal strip on the factory cars), the round front and flattened rear arch openings, and the familiar relationship of front wing, rear wing and the pull-handle door in between. Yes, it’s definitely an MGB, even if the front-three-quarter view suggests time spent at Zagato, a line of thought helped by that pale metallic green paintwork.

The glass is all unique to the Berlinette. The front quarterlights are fixed and frameless, the door glasses behind them are re-made with squared-off rear upper corners. There is a normal bootlid – tubular-framed, and held open by a non-period gas strut – rather than the hatchback tailgate that would make the factory GT a more useful machine, but the Coune car’s rear bulkhead can drop down to allow long loads, such as skis, to be whizzed in style over an Alp or two.

Clearly, Coune had to re-trim his cars’ cabins extensively, and if they were all as sumptuous as this one it would account for a hefty chunk of that high selling price. This car’s body and interior have been restored by none other than Carrozzeria Touring, adding further to the sense of pervasive Italian-ness that Coune was no doubt aiming for, and it’s rather beautifully done. Tan leather abounds; it’s vertically stitched on the door panels (topped by Couneunique padded rails) and that foldable rear bulkhead panel, it clads the inner sills, it covers the load area behind the seats where a vestigial rear seat would be on a regular MGB GT. Half of that load floor hinges up to reveal a storage area and a cover, leather again, over the single battery where MGBs of this era usually had two, each of six volts.

The rear-view mirror sits on an elegantly slender aluminium stalk, the patinated woodrim steering wheel bears a hefty MG-logo’d boss in its centre. But behind it is still a regular crackle-black MGB dash – no tacky woodveneer kit here, as spoils many an old B – and ahead of the cranked gearlever is still a flattenedoctagon speaker grille. From the driving seat there is no doubt as to this car’s roots. As built, Coune MGBs were mechanically standard. This one, however, is not. It’s a showcase of tuning parts, mostly conceived long after this Coune was completed. The most period – albeit newly interpreted by US company Pierce Manifolds and now dubbed MSX – is an aluminium crossflow cylinder head of a type once marketed by VW Derrington. With its four inlet ports, instead of the original iron head’s two siamesed ones, it’s able to be fed by a pair of Weber 45 DCOEs in place of the original SU HS4s. A high-lift camshaft makes use of this extra breathing ability, as do cylinders enlarged to 2 litres from the original 1798cc. Crankshaft and pistons are forged items, ignition is electronic.

The precise numerical result of this enhancement isn’t known, but the people who look after the rather wonderful collection of which the MGB is part reckon on over 170bhp. This substantial improvement over the standard 94bhp is fed through a Ford Type 9 five-speed gearbox, meaning that this particular 1964 MGB has synchromesh on all forward gears. A giant aluminium radiator keeps the engine cool, a finned alumium rocker cover keeps it smart. There’s more. You might expect to see leaf springs and lever-arm dampers between the rear wheels, but instead you find coil spring/ damper units and, to keep the axle where it should be, upper and lower radius arms each side and a Panhard rod. There are disc brakes all round, too, the front ones vented.

A set of aluminium-rimmed Borrani wire wheels with 185/65 R15H Uniroyal tyres completes the Berlinette’s gentrification and sportification. Now, on this hot, sunny day, we shall see how well it all works, bearing in mind that the whole project is very new and still to be fine-tuned. The engine catches with a deep, beaty growl that’s MGB-like but more menacing, helped by the lack of a rear silencer, although there are two little ones upstream.

Into first and away. It’s odd not to hear the characteristic symphony of a straight-cut BMC first gear, nor indeed any obvious whine in the higher ratios. This is certainly a gutsy, torquey engine, well able to haul a car significantly heavier than an MGB roadster. It’s not especially revvy, but it doesn’t need to be. The brakes feel firm underfoot, the steering is positive and the way it weights up in a corner is on the right side of tolerable. It’s all good, squirtable fun.

Just two things dampen the enjoyment. It gets very hot in here, there being no fascia vents and no opening front quarterlights (although the rears do open). And, pending that fine-tuning, the rear suspension gives a very choppy, bouncy ride, made worse by the way it clashes with the seats’ natural bounce frequency. Adjusting the dampers might fix it; the potential for dynamic sophistication is surely there, as Frontline Developments’ similarly suspended Mazda-powered MGB LE50 proves with dynamics probably better than those of the (many) other MGBs I have driven.

Otherwise, the Coune MGB Berlinette is a very appealing take on a familiar breed of car.

So appealing, according to the website of well-known MG parts supplier Moss Europe, that Alec Issigonis talked with Jacques Coune about building it at Abingdon, with royalties paid to Coune. And so BMC sent a right-hand-drive MGB – the one mentioned earlier – to Coune to be made into a Berlinette, and on its return BMC chairman George Harriman, MG guiding light Syd Enever, Issigonis and even BMC aristocrat Sir Leonard Lord (Lord Lambury by then) drove it extensively.

However, BMC was also developing, with Pininfarina’s design help, the car that became the MGB GT. It kept more standard MGB parts, it looked more obviously related to the roadster, it had that hatchback and it would be cheaper to make. So Coune’s Berlinette was doomed as a mass-production prospect. Issigonis, too, is said to have considered the Berlinette to look ‘too Italian’. As backhanded compliments go, it’s a good one.

Only 12 Berlinettes are thought to survive, but the design wasn’t Coune’s last go at reimagining an MGB. For the 1966 Turin motor show he created a targa-top sports car, the Gemini Spyder, with a transparent roof, a Berlinette-like tail and a nose with shades of both E-type and Lotus Elan. But just one car was built, later destroyed in a crash, and thus ended the tale of Jacques Coune’s MGB adventures. Full marks for trying, though, because no roadgoing MGB is more exotic than the Belgian Berlinette.

Left and below Coune MGB Berlinette looks most obviously different from the rear, with its re-profiled boot, wrap-around rear screen and Simca tail-lights; B-series is stretched to 2.0 litres in this case, its breathing also improved to give 170bhp. Above, top right and right The mark of Jacques Coune, coachbuilder; rather more exotic-looking than the MGB roadster, though not necessarily prettier; interior features standard dash, though this example is luxuriously trimmed.