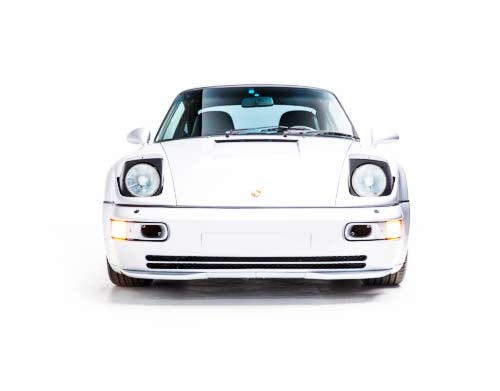 Nose Job Changes to global markets and staff at Porsche shaped the makeup of the 964 Turbo, a car that started life as a baby 959 and ended its evolutionary journey as the car you see here – the rare Turbo S Flachbau… Story: Simon Jackson. Photography: The Peterson Automotive Museum.

During the early 1990s Porsche was in the midst of a dire financial situation. It would rob us of a car that had all the hallmarks of becoming one of the most iconic 911s of all time – the 969. Intended as the replacement for the 911 (930) Turbo, the 969 was billed as the ‘son of the 959’ by those who knew of its genetic makeup. Built on the platform of the Carrera 4, this car ran an advanced four-wheel drive system and boasted styling that mixed 964 with 959. Perhaps most importantly it ran a 370hp engine mated to a PDK automatic transmission with the option of a manual gearbox too. The water-cooled flat-six motor was 3.5-litres in size and used twin turbochargers which worked in conjunction with four-valve cylinder heads. Here was a range-topping 911, a 185mph plus supercar, except it was taken from us before it was even properly born.

The decision to cancel the 969 project must rank as one of the most significant in the history of the modern 911, for not only did it promise much but Porsche had got just 18 months away from starting production on it. Some sixteen prototype cars existed, the numbers had been run and tooling for production of 2,500 cars established. So what happened? A man called Heinz Branitzki – that’s what. Porsche’s former finance director took over leadership of the brand in the late 1980s, Branitzki assumed the big chair in the midst of the stock market crash. Practically overnight a vast chunk of Porsche’s customer base, the ‘Yuppies’ if you will, vanished, and with them the market for a bank balance breaking, fuel glugging, 911 supercar. Porsche was not yet in the red but one wrong move could change that, a bean counter by profession, Branitzki called in a whole raft of suited consultants to look at the hard facts. Numbers presented on sheets of paper encouraged Branitzki to make radical changes.

The 964 Turbo was a poster car for a generation

Potential projects were cancelled including the creation of 928 derivatives, the 924 was given the boot, and the future of the 969, also known as the 965, rested on a knife edge. All the same work on the project continued. If anything the new car’s development was ramped-up, not down. Planned production of 1,000 units was upped to the aforementioned 2,500, and as engineering decisions led the model’s styling it began to take on a purposeful look akin to Group B cars of the era. According to those working on the project, one of the prototypes was nicknamed ‘Black Bomber’, but despite its cool moniker this was a project in trouble. The 965’s engine configuration was causing its fair share of engineering headaches (temperatures were too high, development costs were spiralling), its very essence was in question with Porsche even working on V6 and V8 alternatives for a time. Helmuth Bott was championing the alternatives, but ultimately a solution was arrived at that encompassed water-cooling technology, the bottom end of the 964’s engine and the top end of the 959’s unit.

Then Bott left Porsche and was replaced by Ulrich Bez. The man underneath both, Horst Marchart, immediately questioned the 965 project and Bez commissioned a report into it. This was the beginning of the end for the 965, within two weeks Bez was confronted with data that showed the project was not without issues; not just the question of which engine it would use but how much it would have to be sold for in order to swallow its enormous development costs. The writing was on the wall and sure enough Bez and his team scrapped the 965/969 project altogether in December 1988, crushing 15 of the 16 prototypes and the tooling used to build them. However, the 911 Turbo would not be permitted to die. Bez was presented with a new idea; the development of the existing 930 Turbo 3.3-litre engine (in its most powerful 300hp plus ‘Sportkit’ form) housed in a 964 chassis. This was very much a ‘stop-gap’ idea and turning it around in the time frame would certainly be tight, but the idea did ensure the survival of the 911 Turbo – an iconic Porsche 911 and, importantly, a good earner for the company. Production finally began at the end of 1990.

Porsche first introduced the Flachbau or ‘Slantnose’ option in 1981

By 1992 a large proportion of 964 Turbos being ordered were S variants, but those buyers enjoying the idea of that extra power would soon be offered something else – the 3.6-litre version of the car was being prepared for sale. The revised car would debut at the Paris Salon in the autumn of 1992, it featured the M64 engine enlarged to 3,600cc producing 360hp and 383lb/ft – it is this version of the car that is regarded by many as the ‘proper’ 964 Turbo. The 3.6-litre engine featured new camshafts and cylinder heads with single spark plugs, that differed from the 964 Carrera models which used twin plugs per cylinder.

Lifted from the 3.3-litre engine was the same KKK single turbocharger, it was pretty much identical save for a new design of exhaust and wastegate, the hike in power largely the result of a reworked engine management system. With its new engine the 911 Turbo was now a far better car to drive, not only was it more powerful it was also far more drivable. That the 3.6-litre Turbo was produced only for the 1993 and 1994 model year meant that less than 1,500 were sold – this made it one of the rarest Porsches since the 959. In addition it was the last 911 Turbo to be offered in rear-drive and to utilise a single turbocharger – subsequent 911 Turbos came with four-wheel drive and smaller twin turbo setups. However, Porsche would offer an even more exciting and even rarer version of this 964 variant before the arrival of the 993 model which replaced it. Head of Porsche’s ‘special vehicles’ department, today known as Porsche Exclusive Manufaktur, was Rolf Sprenger. Amongst the alternatives to the 3.6-litre motor offered to Bez was Sprenger’s idea for the second wave of 964 Turbos, he proposed that a modified 3.3-litre Sportkit motor was used, it was known internally as the ‘Sprenger motor’, though ultimately the new 3.6-litre engine was favoured. In summer 1993 the 964 was nearing the end of its model run, and when a car is nearing the end of its cycle is usually when interesting things start being concocted by Porsche. Enter Sprenger again who wasn’t done tweaking the turbocharged 964 just yet. His ‘exclusive’ department began working on a limited run of hand-built 3.6-litre 911 Turbo cars with the Exclusive Option X88 code – decoded that means the S engine – and a Flachbau (read slant nose) front end. Officially termed the ‘Turbo 3.6 S Flatnose’ these cars came with the M64/50S power unit, a further development of the 964 Turbo’s M64 mill this time boasting 385hp.

Porsche first introduced the Flachbau or ‘Slantnose’ option in 1981,on the 930 Turbo. The unusual slanting nose had racing pedigree, hailing from the 935 racers of the period where its design played an aerodynamic role. Norbert Singer was the man responsible for shaping the aerodynamics of the 934 and subsequently the 935 that followed it.

The 934’s shape was governed by Group 4 regulations, the 935 by Group 5 rules, over the winter of 1976-1977 Singer spent a great deal of time working both in Porsche’s scaled down wind tunnel and Volkswagen’s full size affair at Wolfsburg. His drooping nose design was all about maintaining levels of downforce while also improving the racing car’s drag-coefficient and in this task he was successful.

When Porsche first applied the nose treatment to a road-going 911 in the 930 Flachbau it is commonly understood that less than 1,000 cars were so endowed.

The most expensive road-going Porsche ever built at the time, the 964 Flachbau took inspiration from the 965 project – in fact some of its part numbers even featured those magic numbers. On a worldwide scale only 93 such cars were built though there is some confusion on this subject, most likely because the X88 option could be optioned either on the factory production line or at main dealer level. The most reliable accounts state that 76 of those 93 were slant nose examples for in total they comprised; 10 ‘X83’ cars for the Japanese market (featuring pop-up 930 Turbo S headlights), 27 ‘X84’ Rest of World cars; 39 ‘X85’ USA cars, and 17 USA only ‘Package’ cars. All Turbo S Flachbau models featured the X88 option Turbo ‘S’ PowerKit (including the Flachbau car you see here), with the 385hp M64/50S motor and five manual forward gears, X92 Exclusive front spoiler, X93 Exclusive rear spoiler and X99 Exclusive rear vents. The X88-engined version of this generation of 911 is undoubtedly the pinnacle of 964 Turbo production offering as it does 385hp and 384lb/ft at 5,000 rpm.

The engine’s cylinder head features an inlet with modified exhaust ports, a modified inlet manifold and modified camshafts in addition to a new turbocharger. That impressive engine specification was joined by beautiful 18-inch Speedline spit-rims and an exhaust system with four exits.

Today the 911 964 Flachbau is one of the rarest 911s of all, when examples do appear for sale they change hands for extraordinarily high numbers reflecting that rarity. There’s a school of thought that Porsche did not fully recognise the significance of these cars until within the last two decades, but if that point of view is correct that has certainly been addressed in recent years. The inclusion of such a car in the The Petersen Automotive Museum’s ‘The Porsche Effect’ exhibition (as seen here), put together in collaboration with Porsche, serves as evidence of that point.

Without doubt the Flachbau is one of the most instantly recognisable variants of Porsche 911, so too the 964 Turbo which was a poster car for a generation. Though we might criticise the likes of Heinz Branitzki for terminating the 969/965 project all those years back, we can also perhaps thank him, and for that matter Rolf Sprenger and Norbert Singer, for the car we see here. The 964 Flachbau was in many ways defined by the shape of its nose, and yet ultimately there was much more than that going on under its skin.…

The Petersen Automotive Museum in California is hosting ‘The Porsche Effect’ exhibition until 2019, of which this vehicle is part. For more information visit www.petersen.org/porscheeffect.