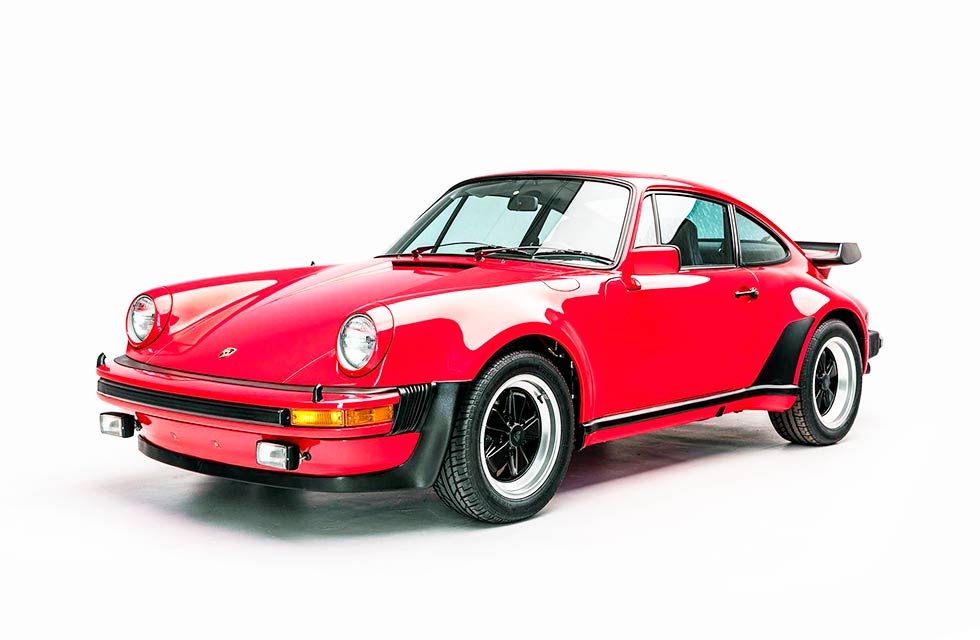 Bad Reputation The 911 Turbo is an automotive icon, this Porsche legend began with the 930 Turbo – a car that quickly evolved during the 1970s and 1980s. We examine the unique driving experience on offer… Story: Simon Jackson. Photography: The Peterson Automotive Museum.

Porsche’s interminable desire to win on the race track led directly to the car you see here – the 911 Turbo. It was specifically Can-Am racing that pushed Porsche down the turbocharging route, a road it not only travelled but comprehensively mastered in pretty short order. Porsche’s Can-Am monsters of the early 1970s were not shy, with nearly 1,000hp and functional aerodynamic aesthetics to die for, Can-Am cars remain to this day some of the most wondrous machines to have ever graced a race track in competition. With its new-found knowledge of turbocharging in hand, Porsche set about applying its new nous from the race track to the road – the 911 Turbo was born.

At the beginning of the 1970s turbocharged road cars were not new, but at the same time they were not commonplace in showrooms either. We’re talking here about the period of the 1970’s oil crisis, after all. Porsche continued development of its new turbo road car at a pace. As a basis it started with its existing 2.7-litre engine but quickly discarded this, moving onto its 3.0-litre Carrera motor primarily for the off-boost drivability it delivered over the smaller capacity mill. A KKK turbocharger running approximately 0.8 bar of boost took power to 260hp though more – as much as 280hp – was readily available according to engineers of the time.

A gearbox with just four forward ratios aided progress with unprecedented torque on offer in every gear. Underneath a new suspension arrangement was designed not out of necessity for the road as such, but rather to allow greater options for the race track via homologation. Geometry changes were matched with spring, roll bar and shock absorber alterations. A wide rear end and, perhaps the most significant visual element, a vast “tea-tray” rear wing were the two most obvious body differentiators from what was otherwise outwardly not a radical 911 in appearance.

The first 911 Turbo of 1974 was well received, this is where the model first received its ominous reputation (rightly or wrongly) for being something of a “widow maker”. One recurring criticism from road testers in period was the lag that the turbo unit inherently delivered, and in being reiterated that opinion stuck. None of that would stop Porsche from increasing the Turbo’s power with its next attempt, though. The 3.3-litre 911 Turbo (as seen in our pictures) of 1978 came not only with a larger motor, but an intercooler too. The intercooler system cooled intake temperatures by as much as 50-degrees Celsius, and that colder, denser air helped the car hit the magic 300hp figure. In addition Porsche reduced the engine’s compression ratio from 6.5:1 to 7.0:1 in a bid to limit the lag which characterised the driving experience – the move did indeed help but lag was still very much evident. Porsche probably cared little either way though for with its first 300hp car it was now finally in the big leagues – by the standards of the day this was a supercar.

Perhaps that’s part of the reason why this variant of 911 Turbo is often considered the best – here was the poster car for a generation. Driving one of these cars today is a story of two halves in many ways. Consider not only that a modern 911 Turbo (I’m talking 991 Turbo, not turbocharged 991 Carrera) delivers well in-excess of 500hp, and that a Turbo S boasts almost double the power of its 1970s forebear, and you’ll be unsurprised to hear that it does not feel ‘quick’ in the same fashion. Rather, driving a 930 Turbo can initially feel a little underwhelming – that’s partly as from the vista inside there’s little visually (other than a boost gauge) to differentiate it from the SC with which it shares much of its basic architecture. But here is where you need to be careful. Unlike the 991 or most 911 Turbos designed in the intervening period, this is an old car and as such it has certain characteristics and a temperament you must respect.

It’s important to remember that this was a car designed to be fast but also civilised, and it is easy to confuse that initial civility with softness. That said, no matter what anyone might say to you, your prior expectations will undoubtedly ensure you make careful and considered progress early on (especially though the corners) given how much this car’s indelible reputation proceeds it. Yet there’s little need to fear these cars quite so much. In comparison with an SC the drivability of the 3.3-litre mill is a pleasant surprise, especially as you’re expecting utterly galactic levels of lag. The blower comes in later than you’d probably like, but it serves its purpose in making the 930 Turbo easier to drive under normal circumstances than an equivalent normally aspirated 911 of the same era. By that I mean that your workload in the car is reduced thanks to the torque on offer, I guess you might say that’s a little alien if you’re stepping out of an air-cooled Carrera.

Low down the rev range there isn’t a great deal going on. So much so that it’s likely those preconceptions of fearsome power and snap oversteer will be all but forgotten, just as you bury your foot harder and harder into the carpet in an attempt to awaken the beast. At around 3,000rpm the car begins, somewhat slowly, to come to life but the key thing here is that it isn’t done yet. Oh no.

Between 4,000rpm and its redline some time before 7,000rpm is where all the power is to be found, but to be honest even that is being generous, for most of its shove comes between 4-6,000rpm. In this sweet spot you might say that the power delivery is quite brutal, short and mighty, but for a shining moment the 930 Turbo feels as fast as your head believes it should. Ordinarily in this situation you’d snatch the next gear in the sequence and do it all over again, except the four-speed ’box results in the driver needing to leave the car in gear for very long periods. During this time your speed is increasing towards three figures. The end result is that you spend large proportions of your time in second gear, third maybe, if you drive in a conventional manor.

To get the best from these cars you must recalibrate your brain, you must rev the car harder than you feel you should. Try using first gear not as a cog just to get you underway, but as a useful ratio for acceleration – then the 930 Turbo will begin to make sense. First is good for 60mph, second 90mph and third 130mph – if you’re brave enough fourth will see you all the way to car’s top speed of around 165mph.

So, the 930 Turbo is not terrifyingly fast in a straight line, though it is more exciting the more aggressive you get with it. However, if you continue to drive in that hard fashion through corners you should be warned. By no means does the 930 Turbo look to kill you in each and every turn, in fact if you drive it normally it barely moves around underneath you at all, the latest 718 GTS cars are far more lively in every way for example – even with their traction systems engaged. However, if you forget the laws of physics, and the special chapter within covering 911s, you might come unstuck. Into turns its inherent levels of understeer are not exactly frightening unless you’re carrying too much speed – but that’s the case in every car no matter where its engine might be located or by which wheels it is driven. Confidence is a useful trait to exhibit with the 930 Turbo, get back on the power out of the corners rather than shying away from the right pedal and its wide rear end will hunker down and provide traction. Should a slide occur it is not automatically time to book a visit from a local priest. While there are admittedly none of the electronic safety nets that your 580hp 991 Turbo S uses to save your bacon in the event of the worst, the great thing about 911s of this era is that you can control them provided you exercise common sense. Take heed of the warning shots they occasionally fire across your bow, feel the attitude of the car through your delicate derrière and the very tips of your fingers. Stay calm, do not lift the throttle in panic and feed the power in gently – as you would in every 911 – and all is likely to be well in your world.

It’s a rather odd experience to drive a 930 Turbo today. It undoubtedly challenges your preconceptions and quickly sees you doing things you would’ve thought utterly crazy prior to turning the key in the ignition. Ultimately I think that if you choose to view these 911s as ‘sports cars’ in the typical sense, likening them to period RS creations or perhaps even later performance orientated models, then you might come away disappointed. Instead look on these cars as accomplished GT machines, albeit ones capable of exciting should you choose to provoke them. That way they begin to make much more sense. And I guess that sentiment is true even of modern versions. Though the 911 Turbo has evolved dramatically over the years, it remains a car you’ll drive fast in a straight line without hesitation, one you’d choose as a partner to devour huge distances, but not necessarily the model you’d choose for track work or to entertain through a twisting section of country road. In that regard though much has changed with the 911 Turbo, very little has too. Porsche’s legacy on the track with turbocharged racing cars speaks for itself, the 930 was a success both on circuit and on the road. But perhaps more importantly with this car, Porsche created a 911 bloodline, and an icon that endures to this day.

The Petersen Automotive Museum in California is hosting ‘The Porsche Effect’ exhibition until 2019, of which this vehicle is part. For more information visit www.petersen.org/porscheeffect