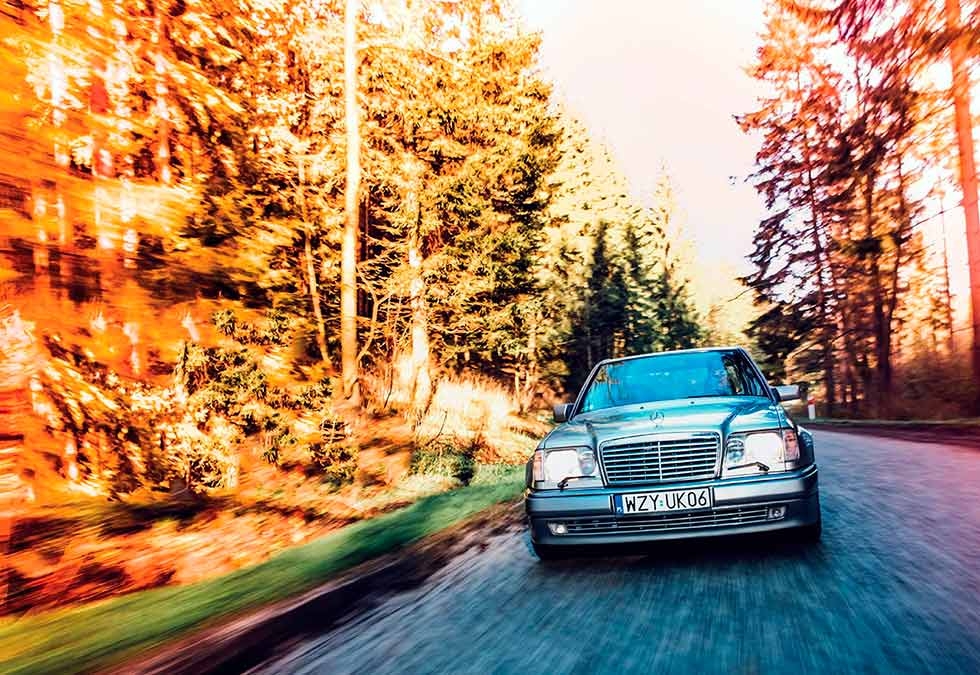 The best supersaloon you’ve never heard of. So says Richard Heseltine after an uphill charge in the E500, the M5-baiter from Mercedes that wraps its iron-fist power in the velvet glove of anonymity. Photography Lyndon Mcneil.

In the cold light of retrospect, this wasn’t a bright idea. It’s early, it’s chilly, and a tree-lined former hillclimb in Poland’s Jelenia Góra valley isn’t the ideal place to become acquainted with a V8 supersaloon.

The Mercedes-Benz E500 W124 isn’t at all happy being thrown about at low speed, that’s for sure. Damp cobblestones and grip are mutually exclusive, resulting in a couple of what might euphemistically be referred to as ‘moments’. Traction-control lights flicker on and off as traction is lost and found, and then lost again. It’s taken a turn for the Disco Inferno in here and we’re not even at the halfway point.

Scroll forward an hour and initial misgivings have made way for something else altogether. You see, the E500 may be the best supersaloon you’ve never heard of. Heck, it may be one of the best cars, period. It defies expectations as much as gravity, the real surprise being that it doesn’t feel like a factory hot-rod despite packing 316bhp. It’s still a Benz, one made before build quality famously took a dive, and is oh-so comfortable with it. That does rather beg the question: why does it barely register in the UK when BMW’s equivalent M5 E34 is routinely touted as a copper-bottomed, blue-chip classic?

There are so many reasons, it’s hard to pinpoint where to begin. Scroll back to March 1991: when the first 500E (note the use of ‘E’ as a suffix rather than a prefix – more on that later) arrived in Blighty, it cost a whopping £56,000. The equivalent BMW was £10k less. Not only that, but the suits at Mercedes also reasoned that there would be insufficient demand to justify the expense of tooling up for right-hand drive, so it was only ever offered as a left-hooker. And then there’s the styling. To the initiated, it looks much like any other E-Class; the sort of blandmobile once found parked in the cab rank outside a terminal at any continental airport. You had to really want a Q-car to justify ownership.

Strictly speaking, however, Mercedes never considered it an M5 rival. The 500E existed in its own little niche, it insisted, and there is an element of truth to that. The thing is, this is as much a product of Porsche as the three-pointed star. These days, Porsche has a controlling interest in Volkswagen, and therefore also in Audi – one of Mercedes’ fiercest challengers. Back in the late ’80s and early ’90s, however, Porsche’s financial state was anything but rosy. Landing a contract to engineer and then partially assemble a prestige performance car for Mercedes represented a much-needed injection of cash.

That said, the idea of building a hotted-up E-Class apparently stretched back to shortly after the W124 series first appeared in 1984. The original intention was to lightly tweak the flagship 300E, only for the project to take a turn for the ambitious. Despite its outer appearance, the 500E production car shared only its roof, front doors, bootlid and glass with a regular saloon. Beneath the skin, the all-alloy, 32-valve M119 V8 was carried over from the R129 500SL, but with a modified block, crankcase and conrods. The horsepower rating was the same as the roadster: 322bhp, but it boasted a 7% hike in torque to an elephantine 354lb ft.

Shoehorning the V8 into the E-Class hull wasn’t without its problems, mind. It was a tight fit, so the battery had to be relocated to the boot – which, if nothing else, helped with weight distribution. The transmission tunnel also had to be reworked to accommodate the 500SL’s rear differential. The engine came with the four-speed auto from the SL, which was switchable between ‘Standard’ and ‘Economy’ modes; a manual ’box wasn’t on the agenda. Mercedes’ electronic hardware of the period was carried over, not least ASR (Acceleration Skid Control), as was self-levelling rear suspension. The 500SL also gave up its ventilated-disc braking set-up, while the suspension was lowered by 23mm relative to the donor saloon and the front and rear tracks were widened ever so slightly.

Inside, there were Recaro-made sports seats with pronounced side bolsters, and individual rear chairs with a stowage compartment between them (due to the enlarged transmission tunnel) rather than the usual W124 one-piece bench arrangement. Cloth/half leather was offered as standard, with a full leather cabin available as an option, as was walnut veneer trim between the front and rear seats. Porsche was responsible for most of the re-engineering, its contract with Daimler-Benz extending to installing the V8s in its Zuffenhausen factory. Cars were then transported back to Stuttgart to be checked and painted, whereafter they returned to Porsche for final assembly before arriving back at Mercedes for a last once-over and dispatch to customers. It was a tortuous process, but it worked.

Unveiled at the October 1990 Paris Salon, the 500E remained in production until April 1995, with each car being handbuilt over the course of 18 days. Two years in, the V8 lost 6bhp (but gained 2lb ft of torque), while the brake discs were enlarged in February 1993. Later that same year, the 500E became the E500 following a makeover. Physical differences stretched to a relocated three-pointed star (on the bonnet rather than atop the grille), and clear rather than amber indicators front and rear. A final run-out edition, the E500 Limited, featured silver paint and 17in DTM-style alloys, but none of the 500 built was ever officially imported into the UK.

Few of any description were: all told, only 29 of the 10,479 cars made were sold by British dealers, although a number more have arrived in recent years, mostly from Japan.

Which, naturally, brings us back to Poland. ‘Our’ late-model E500 doesn’t look out of place against a backdrop comprising mostly slate-grey skies, plus the occasional castle and blink-andyou’ll- miss-it village. Quite the opposite. It looks like the aged minicab that ferried us to our hotel. And therein lies much of its appeal. Save subtly flared wings and oh-so-’90s rolling stock, there’s little to give the game away that this is anything other than a regular W124-series E-Class. Discretion is key, here.

‘THIS IS A BENZ MADE BEFORE BUILD QUALITY FAMOUSLY TOOK A DIVE, AND OH-SO COMFORTABLE WITH IT’

The same is true inside. It doesn’t feel or look overtly sporting, or any other kind of sporting for that matter. Sumptuous leather embraces you, the seats cradling rather than clinging to your anatomy, while the timber looks more real than the simulated plastic found in many saloons of the period. This sense of non-threatening civility doesn’t ebb once you turn the ignition key, either. The quad-cam, 32-valve powerhouse doesn’t erupt into life. Instead, it emits the gentlest burble before settling to a barely audible idle. It’s only when you flex the throttle and the car gently rocks from side to side that you get some impression that this isn’t just another oldschool Mercedes, with all that implies.

Release the footbrake, ease off the line and the E500 wafts along just as Mercs once did. This is not your traditional big-horsepower supersaloon. The torque curve is on the flat side, with the 346lb ft peak arriving at 3900rpm. It’s only when you bother to consult the speedometer that you realise you’re heading for a jail sentence. It may be nearly 30 years old, and weigh some 1708kg (3767lb), but it can sprint to 100mph in less than 15 secs and on to an electronically limited 155mph. It just doesn’t feel dramatic. Not even close.

Much of this is down to the ride, which wasn’t sacrificed at the altar of high performance. These days, ‘sports suspension’ often equates to ‘no suspension’, but the E500 acts as a reminder that a payoff between comfort and sportiness is possible. There’s no crashing over calloused asphalt, just infinitely better body control than the wrapper might suggest. On the flipside, it isn’t happy being hustled at low speed.

The steering is light and nicely weighted, and the 245/45 ZR17 tyres proffer decent grip, but chuck it into a tight corner and the dashboard lights up as the power of the engine overcomes the balance of the chassis. Period road tests complained bitterly about the traction control, and three decades later it seems to be either on or off. The rear end will step wide long before the ASC decides to wake up. It isn’t remotely scary, but it does focus your attention.

The E500 really shines on proper roads with nice, wide curves and long straights. The power is instantaneous, and it’s only when you bury the right pedal that the engine note changes from a faint rumble to a more guttural, but still tuneful growl. It handles wide sweepers with aplomb: there’s honest-to-goodness poise here, to the point that you would swear it can’t possibly have been made two and a half decades ago.

‘BURY THE PEDAL AND THE NOTE CHANGES FROM A FAINT RUMBLE TO A MORE GUTTURAL, TUNEFUL GROWL’

It isn’t exactly economical, though. Driven with decorum, as much as 27mpg is possible if you believe the period PR bumf. Indulge yourself and you can expect mid-teens if you’re lucky. But that does rather go with the territory.

It’s hard not to gush about the E500. It’s a car that is understated, but charming with it; blisteringly quick for its vintage, yet for the most part benign. You feel as if you could cross a continent in a single bound, and not be averse to a return journey following a hearty lunch. The BMW M5 may be its natural rival on paper, but it is a very different animal. After all, no M-car in period came with a torque converter. The E500 is about cosseting its driver and getting places very quickly, without making a big show of it. There’s nothing ‘motorsport’ about this Benz.

And the best bit? You can still pick one up for around £15k, maybe a bit less… assuming you can find one. An ultra-low-mileage example will probably be twice that, but even that isn’t excessive for what it buys you. Of late, enthusiasts have started to wake up to the 500E/E500, yet it remains widely ignored by all but the marque faithful. Expect that to change, and soon.

Thanks to Piotr Frankowski and Filip Blank