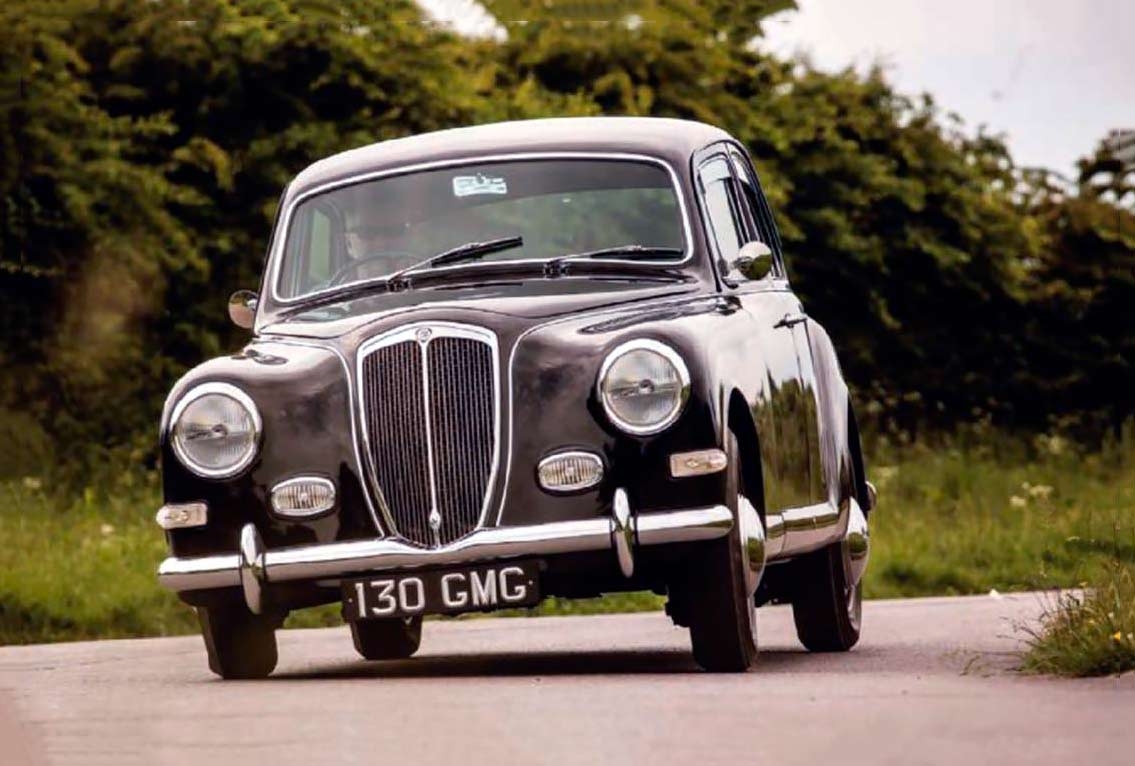 An Aurelia for all reasons. Forget about the ultra-glamorous coupés and convertibles, Martin Buckley reckons that the finest variant of the landmark Lancia is the seductive saloon that spawned them. Photography Tony Baker. Keep your coupés and Spiders, says Buckley: the Aurelia saloon is best. Lancia Aurelia B12 Sweetest son of a brilliant V6 family.

The assertion that the best Lancias were always the saloons is not very original. True students of the marque have always known it. The trouble is, human vanity tends to trump the finely honed niceties of connoisseurship when it comes to classic cars. That is why the refinement, subtlety and sophistication of this elegantly homely Aurelia B12 – the last and probably the best of the four-door Aurelias – will always be the subordinate partner in the often repeated story of the most exalted of Lancias.

That is not to say that the B20 coupé and the B24 Spider are not fully deserving of their status: they have glamour, headline-grabbing values and the sort of beauty that makes anyone look good behind the wheel. Yet, even accounting for all that, it is hard to square the aura of reverence that surrounds the two-door variants with the general ignorance of the factory sedan.

Rewind almost 70 years and the new Aurelia, launched as the 1754cc B10 in 1950, was at the cutting edge of passenger-car technology and was probably the most admired production saloon in Europe. Where other great marques were struggling to maintain their pre-war reputations, Lancia added extra burnish to its name with this uncompromisingly engineered model.

It featured not only the world’s first production V6 engine, but also semi-trailing-arm rear suspension (another first), inboard rear brakes and the high-tech purity of a transaxle to lend this roomy, long-wheelbase car a light, balanced feel. In replacing the much-loved Aprilia the Aurelia seemed to have a thankless task ahead, yet it maintained tradition in its use of slidingpillar front suspension and a rigid monocoque with rear-hinged back doors and no centre pillar.

By the time that the final saloons were built in 1955, the Aurelia had spawned 20 variations on the V6/transaxle theme if you include the GTs, Spiders and subspecies of the original four-door. Yet it is the B12, introduced in 1954, that is generally considered the best of the lot.

In essence, it was a second-generation saloon that was technically contemporary with the fourth-series B20, which meant de Dion rear suspension on semi-elliptics and located by a Panhard rod. The 87bhp 2266cc V6 had a new alloy cylinder-block casting and modern details such as a paper-element air filter and Thinwall bearings rather than the old white-metal shells.

Quick-reference visual giveaways for these late cars are tinted safety glass (a first on a European saloon), front quarter vents and rectangular spotlights. The better-trained eye may also be able to make out the less bulbous front wing line and larger rear window. Get close enough to one in the metal and you will spot that the B12 also dispensed with the distinctively ornate profiled headlamp lenses of the earlier incarnations. Adrian Rudler, having owned most other types of Aurelia (and almost every other Lancia worth mentioning) came to the conclusion some time ago that a B12 was the car to have. The problem was finding one. “I was looking for 18 months,” he says, “and just missed a car for sale in Italy. I’d nearly given up when Martin Cliffe at Omicron mentioned that this one might be available. Even better, it was only 25 miles away.”

To any Lancisti with a memory for numberplates, 130 GMG may ring a bell because this was the B12 tested by Maurice Smith in the 27 July 1956 issue of The Autocar. In fact, the magazine had already done a full and glowingly worded review of a sister car, 5 CMK, in April ’1955. For Smith’s Road Impressions two-pager, 130 GMG was photographed at Taggs Island near Hampton Court, where there was still a hotel called The Casino and the AC Invacar factory. Priced at £2326, the Aurelia was one of a handful of B12s sold in the UK through the Alperton concessionaires and, at the time of the article’s publication, was already a discontinued model.

Some 2400 B12s were built and this demonstrator, which was registered in December 1955, was one of the last. Factory data shows that it was constructed between June and September, so they clearly were not knocking them out in any hurry. By then, the Aurelia’s originator – the great Vittorio Jano – had made way for a younger design supremo in the form of Professor Antonio Fessia and thoughts in Turin were already focused on a bigger and more fashionably styled V6-engined successor – the Flaminia of 1957.

Lancia (England) sold 130 GMG to George Roberts Engineers in 1957, the firm retaining the B12 until 1964 when it was disposed of to a property developer from Datchet called Nelson Masters. Still with fewer than 70,000 miles on the clock, it found a long-term home with one Dr David Leech in August 1971.

Leech used it until 1975, when it was taken off the road, although restoration didn’t begin in earnest for another 10 years. When Omicron removed the engine and transaxle for overhaul in the mid-’80s, it reported that there was little wear to either. It would be a further decade before the Aurelia was fully dismantled but, even then, corrosion was limited to the front wings and rear valance. The doors and bonnet were not even repainted; to this day, the deep aubergine paint on them is still original. The car took to the road again in 2005, but the MoT history shows that Leech (who by then had been awarded an OBE) was basically using the Aurelia only once a year, to take it for the test.

Today it lives in the Rudler family garage (next to a pint-sized, orange ’60s Lamborghini tractor) and, really, the only thing that Adrian has had to do is simply use it. The B12 did the Sliding Pillar Rally in the spring, and won its class in the concours at the Lancia Motor Club AGM in July.

Just as in 1956, the B12 runs Michelin X tyres on cream steel wheels with ‘dog dish’ hubcaps. Such details are as typically Lancia as the proud presentation of the engine bay, the crackle-black valve covers, the deeply finned alloy sump or the thermostatically shuttered radiator that can be drained instantly by turning a ‘T’ handle. Even the electrics are beautifully installed with a full set of fuses rather than the usual Italian spaghetti.

The austere, self-effacing dignity of the body is perfectly complemented by the interior, which has everything you had a right to expect for the money (reclining seats, armrest, heater) but no unnecessary frills. There are practical refinements, though, such as a hand throttle, a light to tell you that the choke is on and a window winder that folds flat to clear the driver’s knee.

There is plenty of head, leg and foot room (and no transmission tunnel – just a skinny tube for the prop), while the cabin is easy to enter via the wide opening of those pillarless doors. They latch with a deliciously solid and satisfying click against catches on the sills and the roof.

The fawn-coloured West of England cloth was preserved for 60 years under custom-made ‘Regency’ covers, which were probably fitted after the car was sold in 1957. Upon buying the B12, Rudler carefully removed them but has protected the similarly immaculate rear carpet and practical front rubber cover with coir mats.

Inside, you look out over a short bonnet, the view slightly hampered by chunky pillars. For the B12 the flashy fascia of the earlier cars, with their jazzy cream steering wheels and white instruments, was replaced by a more restrained look that wasn’t too far away from what the Flaminia saloon would have. The car manages without a rev counter but has clear, rectangular gauges for olio and benzina, the usual smattering of unmarked switches for lights, wipers and washers, and a commanding wheel with an aerated edge for grip.

To start it, you turn the key and press it in. You’re on ‘six’ right away and soon accelerating purposefully up the road with a note of mellow sophistication, if not quite the absolute smoothness of an in-line unit. The column change looks ponderous but has a crisp, positive action, with bottom furthest away and reverse nearest. This, plus the fluidity and accuracy of the steering (which on paper looks low-geared at four turns lock-to-lock, but doesn’t feel it), informs your whole impression of the Aurelia: its aloof superiority, its mechanical sweetness, the supple detachment of the rattle-free ride that feels firmish at low speeds but is astonishingly composed over rough patches taken quickly.

Its 2800lb is balanced 50:50 front to rear so the B12 doesn’t load up its steering or try to drift its tail, but just takes everything in its neutral stride. With a top speed of 95mph and 0-60 in 17 secs it was not particularly fast, even in 1955 terms. It was all about making short work of cross-country journeys in a pre-motorway world of curves and cambers and unexpected hazards.

The Aurelia is responsive and intelligently high-geared with refined mid-range torque that will whip you up to 80mph in third and happily cruise at that in top. The V6 is flexible and silky, with a healthy 117lb ft on tap at 2900rpm, but you have to work the ’box to get the best out of it. The clutch is not hefty and the column change gets more pleasing with familiarity so you can keep progress smooth; there is a brisk precision about this car that seems to insist you drive properly.

I hope that I lived up to it. Rudler does and certainly enjoys it. He captured 130 GMG for a figure that was beyond his budget, but has not regretted it for a second. This is a special example of a special car. Not just one of the great Lancias, but one the greatest saloons of its time.