If there’s one thing diehard American motorsport fans really don’t like, it’s foreign manufacturers muscling into their home turf and pinching all the silverware. Just look at the furore that surrounded Toyota’s entry into NASCAR; sure, they’re an accepted part of the landscape at Talladega now, but they put a few noses out of joint at first. BMW has form with this sort of applecart upsetting, too, having stomped into IMSA in the mid-1970s with its outrageous Batmobile CSLs; all wide hips and bullish, Teutonic efficiency, mixed with colossal flames and a general air of malice!

What’s more, in 1993 the Bavarians were at it again. Specifically, this time, elbowing their way into the IMSA Bridgestone Supercar Championship. This was a series that was already providing something of an emotional rollercoaster for grass-roots American fans, thanks to the taunting of their beloved Corvette from the likes of the Porsche 911 and Lotus Esprit. Then, when the brawny M5 crashed into the picture, spoiling for a rumble, all bets were off.

Somewhat amusingly, the M5 race car looked pretty much exactly like a standard road car, apart from a bunch of stickers. Hell, it was even wearing street tyres rather than racing slicks; exactly the sort of tactic that’d happily draw onlookers into a false sense of security. But there was certainly ferocity and rage bubbling away just beneath the surface, and it’d only be a matter of time before the Beemer’s true colours revealed themselves. Now, perhaps my comment about the tyres was a touch flippant; the Bridgestone Supercar Championship was sanctioned by IMSA as a showcase for the tyre manufacturer’s new road car rubber, so all the racers actually ran them! But there’s no question that, at the time, the presence of the ‘boxy’, four-door saloon on the grid alongside all those more traditional sports cars, made for quite an eye-catching contrast.

The catalyst to the M5’s presence was the financial backing of Philadelphia businessman and race fan, Ed Arnold, who brought in racer Frank Brown and Brit driver Chris Hodgetts, to set the wheels in motion. Hodgetts’ motorsport connections eased the passage of a pair of BMW Motorsport M5 shells through the factory back-door, and these were duly delivered to Spec Fab in the UK for preparation – Hodgetts again working his connections, knowing the outfit from his time in the British Touring Car Championship. 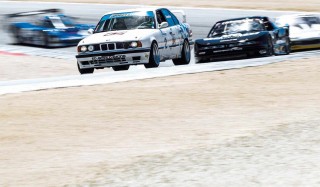 With the two cars race-prepped, losing nearly 400kg apiece in the process, they were shipped to the USA ready for their competition debut in February 1993. The 3.6-litre S38 motor was artfully reworked by Zytec Engineering, to produce around 450bhp (up to 500bhp in later states of tune), running Schrick cams and Cosworth pistons. Impressively, though, the bottomend remained largely stock – testament to the M Division’s original engineering excellence. And so, with a pair of M5 racers in the garage, Ed Arnold Racing was ready to burn some rubber…

The first race for the fledgling team took place in Miami, with just one car competing and Hodgetts behind the wheel – who eventually finished 9th. Where was the other car? Well, it was unfortunately crashed during qualification, by fresh-faced American driver, David Donohue. It was an inauspicious debut, perhaps, but it demonstrated the durability of the car – it finished the race and wasn’t last. And so began a really quite extraordinary tale. 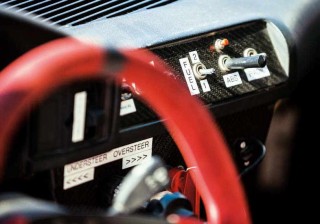 Donohue was a key player in this tale; a 26-year-old finance grad who was struggling to make it in the earlynineties slump. Arnold took a chance on him as a driver, and it paid off rather well, although it wasn’t quite the shot in the dark that it at first seemed.

David was the son of Mark Donohue; respected racer, 1972 Indy 500 winner and sometime Formula One entrant. So the passion was intertwined within the DNA. But, even more noteworthy, was the fact that David wasn’t a hungry young driver who’d started karting at five years old, and doggedly pursued his dream. No, he cheerfully admits that he dabbled in club racing after college, and was encouraged into racing proper by his wife, after he’d failed to ‘find a real job’.

The M5’s next outing was a little more successful, with Donohue finishing in 8th place at Lime Rock, ahead of Hodgetts’ 11th. As the team warmed up, running one car or two at subsequent meetings depending on circumstance, it was the second half of the year when the sparks started to fly. By this time, Arnold had added a third M5 to the fleet, and all three cars ran in the latter races of the season.

The new car was helmed by veteran Kiwi, Rob Wilson, while Hodgetts was swapped at Sebring for BMW works entrant, Dieter Quester, where Donohue managed a 2nd place finish; the M5’s first podium. All of which rather neatly set the team up for a strong start to 1994. 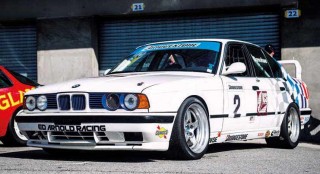 With the race series enjoying enthusiastic and widespread coverage, Arnold’s team was fortunate enough to secure official BMW backing for ’94; the manufacturer sniffing the potential for a whole load of unit-shifting if they could build on Arnold’s sterling efforts and bring in some bona fide victories.

With technical development in the hands of both BMW Motorsport and BMW North America, the scene was set. Meanwhile, with Hodgetts having moved on to new projects, Donohue was able to step into the role of running the show at ground level.

The works boys further fettled the mighty S38 motor, altering ignition and fuel mapping, as well as making changes to the plenum and intake. But it was within the chassis that the real potential for gains was weaselled out. Being a heavier car than everything else on the grid, combined with a lot of horsepower running through street tyres, the engineers had many sleepless nights agonising over spring rates and damper settings. But, following lots of useful testing, they felt that the car had potential to be truly competitive, and so it proved.

In the first race of 1994, Donohue qualified 4th and finished 2nd, thereby injecting a welcome infusion of swagger into the paddock atmosphere, and pleasing the BMW bosses who’d committed so much funding.

Not long after, at Long Beach, David drove the M5 to its first victory, sparking elation in the Arnold camp, and a run of strong finishes followed throughout subsequent races. Then disaster struck! Arnold announced that he wanted to cancel the programme, despite the fact that the team was currently leading the championship. In the event, it was only a last-minute backing deal from the Mercury Holdings Group, that allowed the M5s to continue – the cars officially being leased from Ed Arnold Racing, with additional funding from Westinghouse. 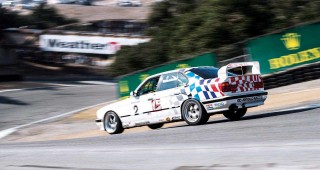 If we view 1993 as the training year, then ’1994 was the season that saw Donohue really get to grips with the M5, extracting every iota of performance from the incongruous-looking four-door saloon. It certainly didn’t hurt that the thing was improbably reliable, as well – there wasn’t a single DNF. That’s the kind of prowess that helps the road cars fly off the forecourts.

However, all good things must come to an end, of course, and the E34 M5 road car was scheduled to be killed-off in September 1995. So it was somewhat inevitable that BMW would withdraw from the race programme in that third year. The Arnold cars were out with gusto in ’1995, although, unbeknown to them at the time, that would be the final year that the IMSA Bridgestone Supercar Championship would run.

Interestingly, Donohue switched teams for this season, going to Team PTG to race the box-fresh E36 M3. Randy Pobst took his seat, and the second team car was rented by IMSA stalwart, Shawn Hendricks. But while drivers changed, the cars remained a formidable constant, taking podiums right from the off.

The series organisers went a bit loopy for the ’95 season, including a sprint up the Pikes Peak hillclimb in the dirt, as part of the race series (possibly why the series was subsequently cancelled). You can imagine how a heavy, RWD car fared there on street tyres, but numerous other events of the season saw at least one M5 podium finish. The cars wowed the crowds at Sebring, Lime Rock, Sears Point, Mid-Ohio, Laguna Seca, Long Beach, New Orleans and Phoenix. It was a true pan-USA roadshow of beefy, German might! Hendricks took the driver’s title, and BMW celebrated its second manufacturer’s championship in a row.

But with the series then cancelled, these bullish M5s found themselves all fuelled-up but with nowhere to race, and they ended up abandoned, at Arnold’s Pennsylvania premises. It was almost a decade before BMW North America swooped in to save them. Thankfully, the restored, championship-winning car now lives in the NA heritage collection, albeit looking slightly out of place among its more aero-focused stablemates.

But it serves as a clear reminder of the significance of upsetting the establishment, and of achieving the seemingly impossible. On a grid of lithe and thoroughbred sports cars, this weighty, four-door autobahn express – with its comparatively high centre of gravity and sledgehammer approach to aerodynamics – took on the frontrunners and taught them a thing or two about received wisdom. That’s a legacy that will resonate through the generations, and something about which BMW ought to be very proud.

This E34 M5 race car took the IMSA Bridgestone Supercar Championship by storm in the early 1990s. The significant, on-track success this car enjoyed should never be forgotten or under-estimated. It was an incongruous, faintly comical sight, but the Americans didn’t laugh for long! The Bavarians were at it again… elbowing their way into the IMSA Bridgestone Supercar Championship. This historic race-winner was saved by BMW North America, and is now an important part of the NA heritage collection. Apart from the highrise boot spoiler, the championship-winning M5 didn’t look much different from a road car. The 3.6-litre S38 motor was artfully reworked by Zytec Engineering, to produce around 450bhp.