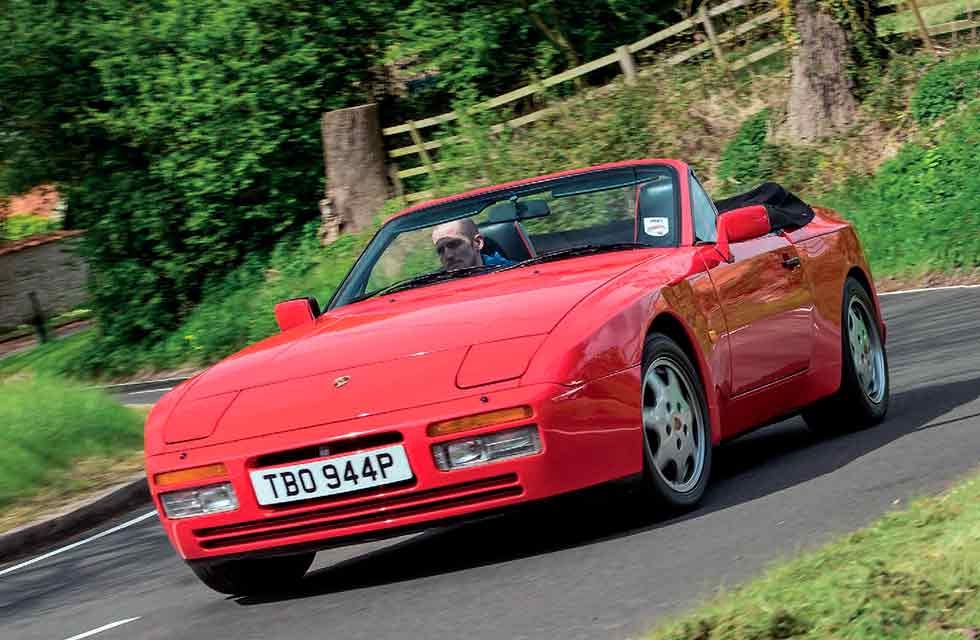 Where the 924 faced criticism from ‘purists’ upset at the fact that the popular Stuttgart-badged 2+2 was loaded with equipment highlighting the model’s origins as a joint venture between Porsche and Volkswagen, the 944 that followed put paid to any whinging. Here was a Porsche launched with a robust 2.5-litre engine – essentially a developed 928 V8 cylinder bank – from the manufacturer’s own stable. The car boasted wide rear quarters (hello to the 924 Carrera GT fans among you), optimised handling and, in true Porsche fashion, was the subject of a continuous development programme that saw various tweaked and tuned coupé and open-top 944s go on sale with either naturally aspirated or forced induction powerplants during the course of a near tenyear production run.

In 1991, Porsche unveiled the 944 Turbo Cabriolet. By then, the boosted hard-top variant of the front-engined, rear-wheel drive supercar was chucking out 250bhp and had been treated to suspension, brake and transmission upgrades formerly the reserve of those taking advantage of main dealer cost options. The turbocharged ‘al fresco’ 944 inherited the very same kit from the off. Of the 625 examples made, none were imported Stateside and only a hundred were built with right-hand drive, shared between all applicable territories, making the model a rare sight on British roads (just sixty-two examples are listed at howmanyleft.co.uk, and half of those are declared SORN). Its scarcity has seen it become one of the most desirable Stuttgart drop-tops, a status that’s a far cry from the ‘not a proper Porsche’ accusation often levelled at transaxles by those who have yet to experience the quality of engineering, performance and comfort these cars have to offer.

Of course, air-cooled Porsches and their flat-six engines have been the driving force behind the surge in popularity (and price) of classic German metal in recent years, but you only have to take a look at the current product line-up from our favourite car maker to realise the 944 Turbo Cabriolet represents a formula that works just as well for Porsche today as it did more than a quarter-century ago. Yep, we’re referring to the manufacturer’s 718 Boxster S offering, a convertible powered by a turbocharged 2.5-litre four-cylinder engine. A step back to the future, or one designed to keep a respectable distance from the sixes? You be the judge, but there’s no denying the newer car’s following of a tried and tested path offering practicality, power, great handling and fuel efficiency as laid down by the similarly configured 944.

OF THE 625 EXAMPLES MADE, NONE WERE IMPORTED STATESIDE AND ONLY 100 WERE BUILT WITH RIGHT-HAND DRIVE, SHARED BETWEEN ALL APPLICABLE TERRITORIES

With a quoted maximum speed of 162mph and a 0-100km/h sprint of less than six seconds, the 944 Turbo Cabriolet promised performance in keeping with that of its fixed head sibling. The cab’s chassis was stiffened in order to reduce the kind of body roll and flex so often associated with open-topped sports cars — rigidity was achieved by welding together two floor pans. The work was carried out by American Sunroof Corporation (ASC) at its base near Stuttgart. In short, 944 coupés were wheeled into the Weinsberg-based facility before literally being cut down to size. A windscreen with a pronounced rake and a 60mm reduction in height was then added, along with a metal boot lid and an electrically operated, manual locking, twin-lined fabric hood.

With classic 911 prices regularly exceeding expectation, cars from Porsche’s transaxle have been riding the same wave. As if to prove the point, the 944 Turbo Cabriolet on the pages before you recently sold for almost forty grand, smashing its lower by a considerable margin. While this particular car’s spectacular condition and low mileage were undoubtedly factors contributing towards the respectable sale price, the 924, 928, 944 and 968 are increasingly regarded as cost-effective routes to owning a classic Porsche, with prices starting from less than four grand for a presentable 924 with a fresh MOT.

The 944 Turbo Cabriolet was only in production for few months, but it remains one of the highlights of Porsche’s transaxle back catalogue. The ‘charged rag-top represents the pinnacle of the 944’s dealer showroom specification, the final chapter in the evolution of the model before it made way for the fresh-faced 968. Even so, recognising the popularity of chopped 944s, Porsche was quick to release a similar incarnation of the 968, which you can also read about in this issue of GT Porsche. In terms of exclusivity, however, the 944 Turbo Cabriolet remains king of front-engined, water-cooled Porsche convertibles.

Previous spread The open-top 944 Turbo was the ultimate dealer spec model variant. Below Force-fed 2.5-litre inline-four gives the 944 Turbo Cabriolet just the right level of kick for fun in the sun.