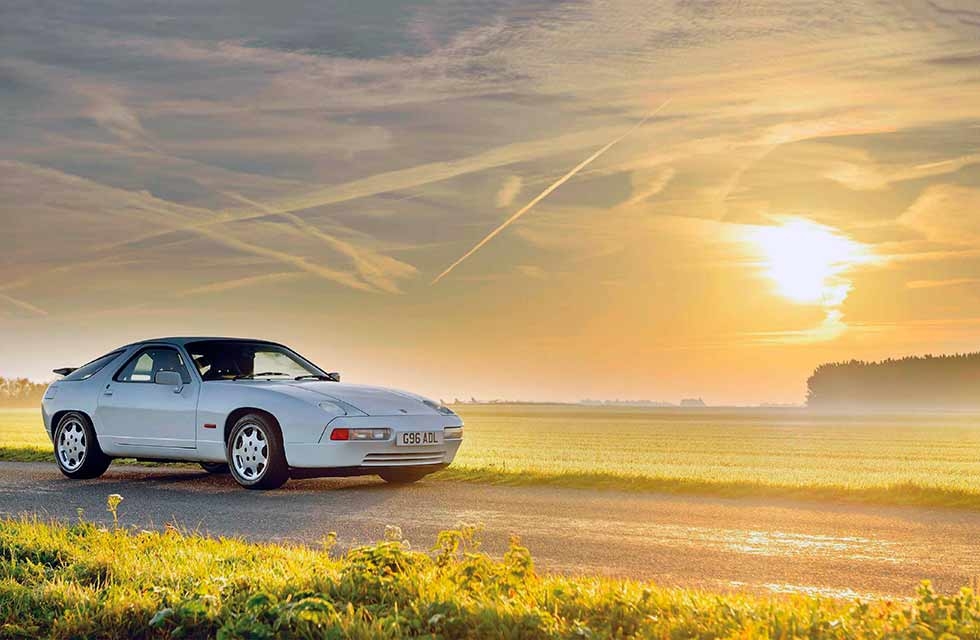 Club Class A track car in a previous life, this 928 GT has been reworked by its current owner to pay homage to Derek Bell’s 928 Clubsport… Story & Photography: Steve Hall.

It’s the noise that gets you first. Given we’re talking about a 5.0-litre V8 bellowing its spent gasses through a custom straight through exhaust with X-pipe, this really doesn’t come as a surprise. This thing sounds absolutely fantastic, and yet, somehow different to expectations: somehow more cultured, more sophisticated, less bass rumble, more guttural howl. It’s a wonderfully indulgent noise which builds intensity through the rev range, encouraging you to hang onto whichever gear you’ve engaged and experience the multi-layered cacophony up front melding with the cultured blare over your shoulder. Not bad for a standard motor. But then, the 928 was always a pretty sophisticated motor car. I’m sure most readers of this magazine will know the story of how the 928 came to be, deemed a potential successor to the 911 which was – supposedly – reaching the end of its development potential, and whose sales figures had dipped markedly. Well, we know how that went….

But the 928 forged its own place in the pantheon of the Porsche model range, a sophisticated sporting GT, the first and arguably only model of its type if, like me, you see the Panamera as a sporting executive saloon. Whilst it never sold in the numbers that the Porsche board hoped for – further proof of its inability to supplant the 911 – over 61,000 928’s came to market during its 18-year life span.

My own experience of the 928 had been underwhelming prior to recent months. Memories of an early – and I suspect not in the rudest of health – 4.5-litre version centre around a car which felt cumbersome and unresponsive. With 237hp powering 1450kgs through a three-speed automatic gearbox, this was very much a GT cruiser with an excellent, comfortable driving position, but it had little in the way of sporting intent. As someone whose interest in the 928 had been piqued by a picture of a gorgeous red GTS manual gently oversteering in the pages of Autocar in the early ‘90s, I knew the 928 I really wanted to try was a different proposition entirely.

Which brings me neatly back to the lovely 1990 928 GT you see on these pages. It may lack the 5.4-litre V8 of the GTS, but the reality is a paucity of just 20hp for the 326hp 5.0-litre V8 in the GT. Add in the fact that this particular GT pays homage to the five lightweight 928 S4 manuals that were produced for Porsche’s official endurance drivers in 1987 (Derek Bell, Jochen Mass, Hans Stuck, Bob Wollek and Jacky Ickx), shedding over 100kg off the standard kerb weight, and this is one of the most driver focused, sporting 928s we’ve seen. This is more like it.

Owner Jonathan Stevenson acquired his 928 in September 2017, at which time it was setup – rather unusually – as a track car. Its stripped-out interior with race bucket seats, GT RS decals emblazoned down the flanks, uprated brakes, suspension, and a fairly serious weight saving programme, certainly qualified it as a track focused 928, but Jonathan had always hankered after something along the lines of that ultra rare car given to Derek Bell and company – and this would make for an excellent starting point.

If you’re unaware of the special 928’s produced for the 1987 Porsche endurance driver line-up perhaps a brief potted history is in order. The idea of a lighter, more sporting 928 had been around for some time, so building a very short run of road-legal prototypes as a precursor to 1988’s Clubsport model (designated SE for the UK market) was an excellent testing ground. Losing weight from the lavishly equipped 928 S4 was the most important task, so Porsche removed the sound deadening, central-locking, electric seats, cruise control, sun visors, remote tailgate release, storage bins, rear wiper and transaxle vibration damper. The air-conditioning was reworked to save weight, as was the wiring loom. Forged wheels, wider but lighter than standard, brought the weight down to 1450kgs – a saving of almost 150kg. Coupled with a wider rear track, stiffer front springs, uprated dampers, shorter final drive for the manual gearbox and straight-through exhaust, these 928s were as extreme as you’d imagine a factory car could be. And hugely desirable, as evidenced by the £225k the ex-Derek Bell car sold for at Bonhams in 2016.

Having been setup for the track, Stevensons 928 was perhaps even more extreme than those factory prototypes. Whilst lacking the special wiring loom, the stripped-out interior with no rear seats, half cage, race buckets and the deletion of a multitude of comfort items made for a proper hardcore 928. It didn’t make sense to return the car to standard, so taking the Clubsport prototype as inspiration was a natural direction to follow. Originally Grand Prix White with can-can red interior, Jonathan decided to tone down the look, removing the red GT RS decals, the red interior trim and refinishing the spoiler in the correct black rubberised finish. Cosmetically, the exterior was treated to a meticulous overhaul to give it a proper factory fresh look, with a full respray in original Grand Prix White, treating a few rust spots around the rear quarter windows at the same time. Originally supplied with red RUF wheels for track use, these were sold to fund the correct Clubsport wheels – sourced from Norway of all places at considerable cost. The holes left by the rear wiper delete were filled in, and the Cup mirrors replaced with the correct 928 flag versions. A new windscreen and OEM window rubbers completed the factory fresh look for the car.

On the inside, the red Sparco buckets were replaced with unbranded Cobra buckets draped in bespoke Pasha inserts – a throwback to earlier 928s, giving a period lift to an otherwise black interior; these were matched with simple black Willans harnesses. Replacing the vibrant red carpets, lightweight black Perlon carpet was fitted throughout, with new floor mats made from the same material, finished with “bobble back” backing as per early 911s to prevent slippage, whilst the factory sound deadening was retained as a concession to the volume of rich music emanating from the straight-through exhaust. Series 2 door cards were sourced (as per the prototype cars) and trimmed with Pasha inserts to match the seats. Finally, a three-spoke Momo steering wheel was replaced with the correct 928 wheel, retrimmed in black with contrasting white stitching.

Mechanically the 928 was in good shape; ultimately it had been used on track very rarely before the owners health took a downturn. Correctly sized Brembo callipers were sourced up front and fitted along with new discs. The LEDA adjustable dampers which came with the track setup were rebuilt and adjusted to a more road friendly setting, removing the brittle ride the car previously rode with. A full service including a fluid change for the LSD ensured the ‘Clubsport’ was ready for action.

It’s a lovely thing to behold; having been the subject of such a comprehensive makeover, it’s naturally in nigh on perfect condition. To these eyes, the 928 S4 shape has aged remarkably well, its clean, elegant shape unencumbered by unnecessary swage lines, add some modern detailing and larger wheels and it could easily be a product of the 2000s. And, whilst the interior may bely its age with slightly haphazard ergonomics born of its late 70s origins, the driving position is superb – the seat is set low, but there’s an excellent relationship with the pedals, wheel and stout manual gear shifter. Visibility from the glass laden cabin is excellent. Time for a drive…

Back to that noise again. It dominates every element of the drive initially, such is the quality of sound drowning your senses. It’s vocal, but not as loud as straight-through pipes might lead you to expect, settling down on a cruise, barking when you flatten the right pedal. But the more I drive, the more typical Porsche qualities come to the fore. For a start it’s surprisingly light on its feet, responding crisply when attacking a corner, plenty of feedback streaming through the wheel. This car’s 100kg weight loss against a standard GT version can only help, but body control on the adjustable dampers is excellent, the 928 rolling progressively with no slack through the left or right transition that’s a highlight of our test route. It’s confidence inspiring, the rear of the car responding in unison to your steering inputs whilst remaining stable even under full throttle. The upgraded pedals are nicely positioned if you want to indulge in a kick of throttle whilst downshifting; the dogleg gearchange isn’t the most precise but it has a hefty, mechanical feel which won’t be rushed but is satisfying when you learn its ways. Being a 5.0-litre V8 you could probably leave it in third and cover every responsible speed range anyway. But you wouldn’t want to, because the glorious V8 rumble and accordingly impressive acceleration when you rip round to 6,000rpm are well worth experiencing – this is a V8 that enjoys the right-hand side of the rev counter. It feels genuinely quick, too – 326hp in 1450kg will do that, I suppose – and the straight line mojo is backed up by a firm, responsive middle pedal with weighting perfectly aligned to the expectations set by the rest of the controls – how very Porsche.

I still want to try a healthy manual 928 GTS one day – in Guards Red, just like the Autocar test car from way back when – but I’m thrilled to have had a chance to lay those negative 928 memories to rest. This beautifully rendered GT ‘Clubsport’ was a joy to drive. It’s easy to see why 928 values have climbed so much in recent years, there’s nothing quite like it.