THEN & NOW IN THE BEGINNING

Swirl and tumble down the wormhole, eyes fixed on our very first issue. Swim back, back past almost two decades of the brightest paintwork and the tightest builds in Vauxhall history. Back past the name change, back to the days when the eye-popping VX220 was the fresh young thing of the minute. Against a culture of optimism and government-funded big-tops, the nascent millennium boasts one more Griffin-focused development: the launch of an all-new magazine dedicated to Vauxhall and Opel car culture. 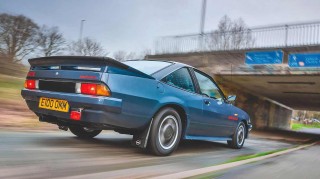 “QUICK, A LITTLE TAIL HAPPY AND REQUIRING YOU TO DRIVE!”

After months of planning and positive reaction to a pre-production teaser, our first issue (back then we were known as Total Vauxhall) was packed with great Griffins and equally brilliant Blitz-badged beasts. It reached its first readers in autumn 2001, and on page seventy-four, over six sheets of chat and pretty pictures, we showcased a brace of boxy, blunt and rally-inspired Manta Bs.

Under the title Manta Clause – let’s take a moment to acknowledge how groan-inducing that pun really is – Total Vauxhall double-oh-one introduced Vauxhall’s continental cousin the best way possible. The feature focused on two final year Bs. One was a black 171bhp road-burner with a barking 2.4-litre Gerry Johnstone (he of Dealer Team Vauxhall fame) motor, the other a pristine GT/E Exclusive retaining almost all of its original specification. Both cars benefited from the attentions of Chris Burt, a massive Manta enthusiast, previous owner of the black beauty and keeper of its stock-specification sibling. 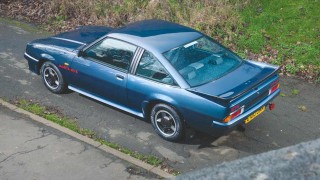 Even back then, Irmscher quad headlights, Recaro seats and an Irmscher front lip made the GT/E Exclusive a desirable machine, but one Chris hadn’t set out to buy. Instead, the lifelong Opel fruit had just started a new job at British motorsport and advanced automotive engineering group, Prodrive, and was looking to swap his homebrew i240 evocation for something more sedate. Fate, and the black car’s buyer, saw things differently. “When he turned up in this Monaco Blue Manta,” Chris recalls, “sensible plans went straight out the window!” A swift purchase and a full restoration followed, including sill repairs and a new genuine bonnet, before the car made its magazine debut.

Soon after the feature, the GT/E broke away from Chris’ custodianship for the first time, finding a new home with a Mantaloving friend. “He really wanted it. Back then, Mantas were ten a penny. You could sell one and buy another in the space of a week.” A year on, in early 2003, the Opel wasn’t seeing any road use. Unable to resist, Chris bought the car back, but just six months later, it was up on the open market once again. The link between two-time owner and twice-owned car then went dead for eight years. The silence was eventually broken when the blue belter was offered for sale once again. “The guy in charge of the car offered to sell it back to me, but by that point in time I had other interests,” sighs Chris. Instead, the GT/E found its way to the owner of a genuine Manta 400 rally machine and a dedicated Opel expert. Over the course of the following seven years, he rebuilt the brakes and front suspension with genuine GM components, renovated the corroded chassis legs and engaged the guys at vintage Vauxhall restoration specialist, Retropower, to fit a new roof skin.

“QUICK, A LITTLE TAIL HAPPY AND REQUIRING YOU TO DRIVE!”

While all this was taking place, Mantas were a siren calling Chris back into the Opel fold after time spent playing with Porsches. A 2015 visit to the Vauxhall Bedford Opel Association (VBOA) National Rally relit his passion and, just two years later, the same event saw him speaking to the GT/E’s owner.

Grinning from ear to ear, Chris announced the fact the chap was in possession of his former steed. “He told me he was considering parting with the car. Swiftly, my heart did the talking. I wanted to be back behind the wheel of the retro ride I’d enjoyed owning previously. You can imagine how pleased I was when, in November 2018, the deal was done.”

Extricated from storage and returned to Chris’ care for a third – and hopefully final – time, the mega Manta needed only minor tweaks for its return to regular road use. Technicians at Northampton Motorsport carried out a full service and engine tune, abolishing a minor driveline shunt and bringing the unsteady idle back into line, actions reviving the two-litre inlinefour’s torquey spirit. “The focus was just to refresh minor mechanical componentry,” Chris reflects. “All the engine needed was a full setup. Everything was just a tiny bit out of whack. The work has positively transformed the driving experience. It feels like I’m in control of a totally different car!” An engine bay detailing session and a new voltage regulator (a necessary purchase to breathe new life into the instrument binnacle) rounded out the recommissioning. 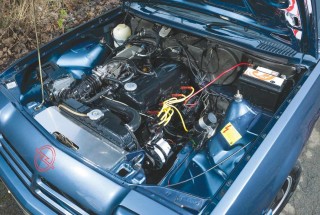 The work complete and the Manta purring as though it’d just dropped off its 1988 production line, Chris and his car had a date with their shared backstory.

Decades earlier, in the months leading up to its maiden magazine appearance, E100 OMM had been subject to a rolling shell strip down and a full respray in the Denimesque blue that shows off its creases so very well. Bicester Bodyshop was the specialist entrusted with the job and the results had more than endorsed the commission.

Now the GT/E was beating back over history’s tyre tracks to meet the firm’s founder, Mark Richardson. “I called in to see Mark as soon as the Manta returned to my care,” Chris beams. “I asked how long his warranty on paintwork was!” Not that long! Twenty years after its first visit, the Opel was booked in for required remedial work. Front wing bubbles are the first concern. Mark and his team will also turn their attention to the front bumper and boot lid. “There are a few blemishes inside the boot between the metal and the bracing. If I don’t get to grips with it, it’ll work its way through the outer skin.”

“WHEN HE TURNED UP IN THIS MANTA, SENSIBLE PLANS WENT OUT THE WINDOW”

Elsewhere and otherwise, this extraordinary cool Exclusive sits pretty with much of its turn-of-the-century restoration. “I always planned to keep the car original,” says Chris. “A lot of GT/Es were modified back in the 1990s and early 2000s. I wanted to keep this one in as close to factory specification as I could.” He’s almost managed it, too; when we turned our cameras on the late model Manta in 2001, it exhibited only two modifications: a K&N air filter and a Jetex three-inch stainless steel exhaust system. The former is long gone, but the bigbore pipework has weathered well and still sits under the car.

Perched in the all-original interior, Chris started smiling on the first mile of his third-time ownership. He hasn’t stopped grinning since. “I was really, really happy,” he remembers. “It was as though I’d reunited with an old friend.” Sitting alongside a pair of Volkswagen camper vans and a Porsche 911 996 Carrera 2 with a noisy exhaust, the GT/E has taken up a distinctive place in Chris’ collection. “It’s a comfortable car. Quick, a little tail happy and with heavy steering requiring you to drive!” That’s exactly what he plans to do after re-arriving at Manta ownership after an extended period in the VW concours scene earning plaudits and trophies by the dozen for his carefully preserved Tornado Red Mk2 Golf GTI. Now, however, he plans to treat ownership of a modern classic differently.

“I’m not going to take things quite so far,” he explains. “The GT/E is going to offer a completely different type of enjoyment to the Golf.” Rain and dirt hold no fear for the Exclusive. Mileage is the main aim. Along the way, he’s turning heads. A trip to one of Bicester Heritage’s increasingly popular Sunday Scramble get-togethers netted a positive mention in print, while a planned trip to this year’s VBOA show will strut the Manta in front of marque connoisseurs. Out on the public highway, the car even appeals to the outer reaches of modern car culture. “Recently, when I was heading home in my Manta, a lad in a stanced Honda pulled up alongside me, wound his window down and told me my car was utterly stunning.” Almost two decades after it first appeared in print, this squeaky clean Exclusive still gets the respect it deserves.

BEST THING ABOUT YOUR MANTA B It feels like a friend

THANKS Mark Richardson at Bicester Body Shop for looking after the paint and shell for me, and to my wife, Deb, for putting up with my car obsession and letting me buy my beloved Manta back! 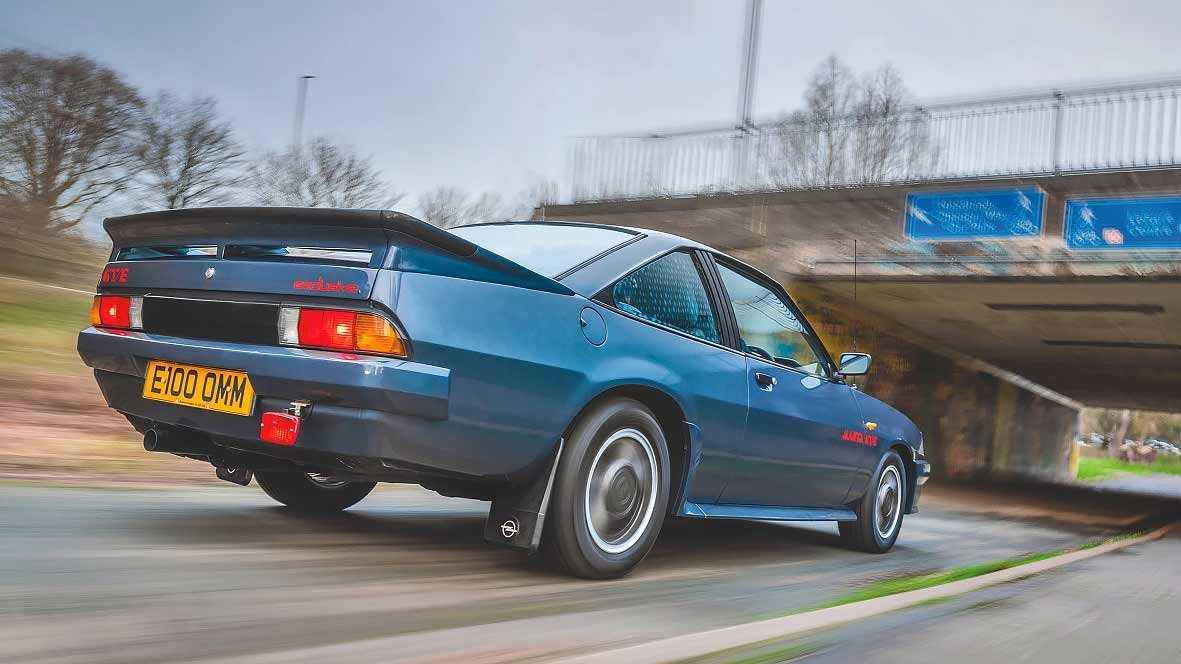 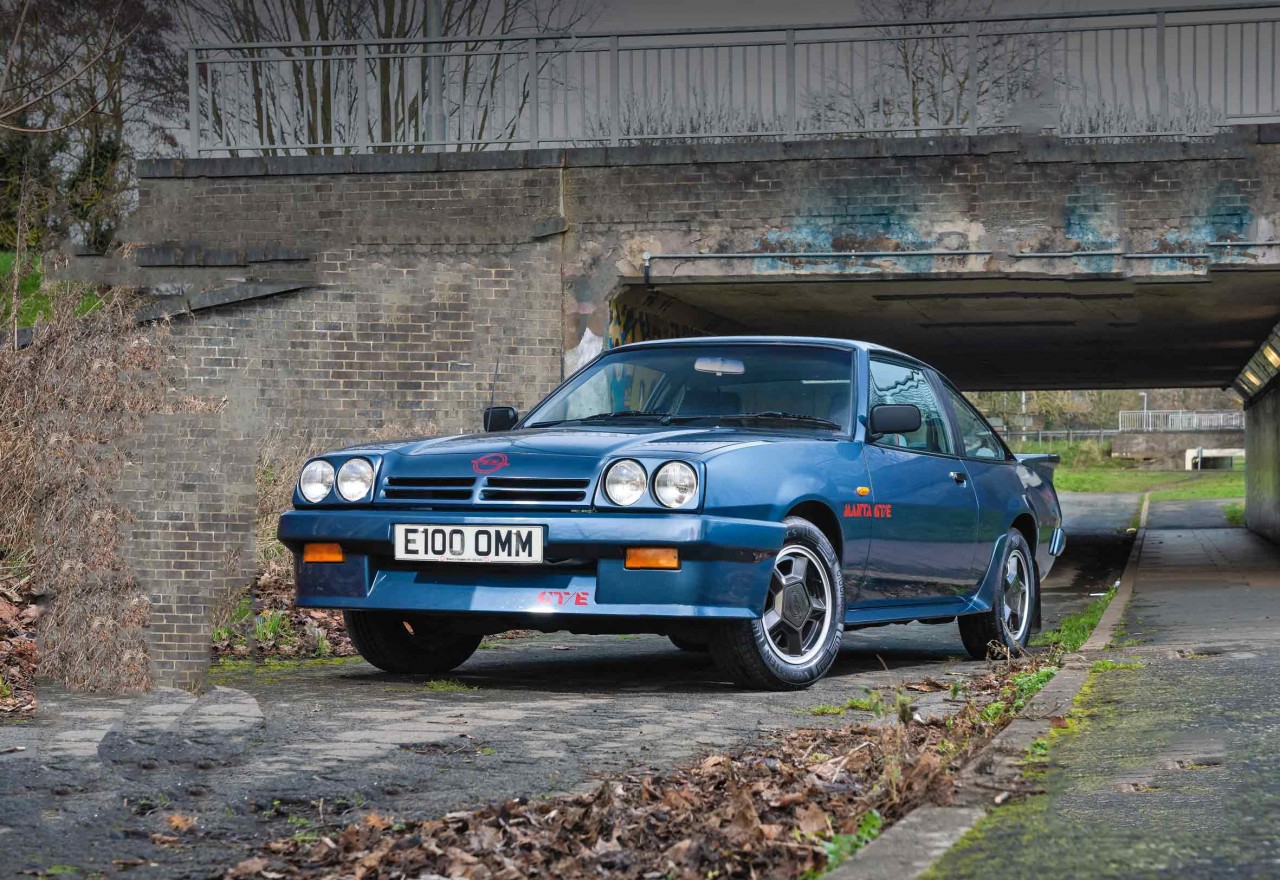 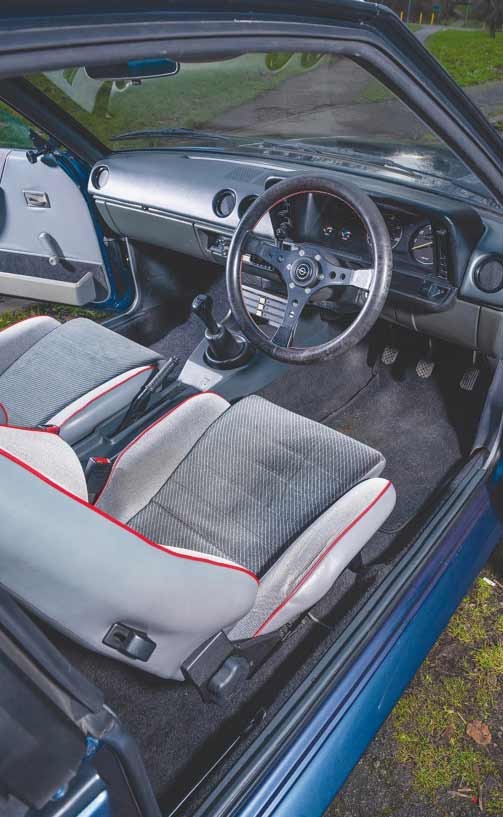 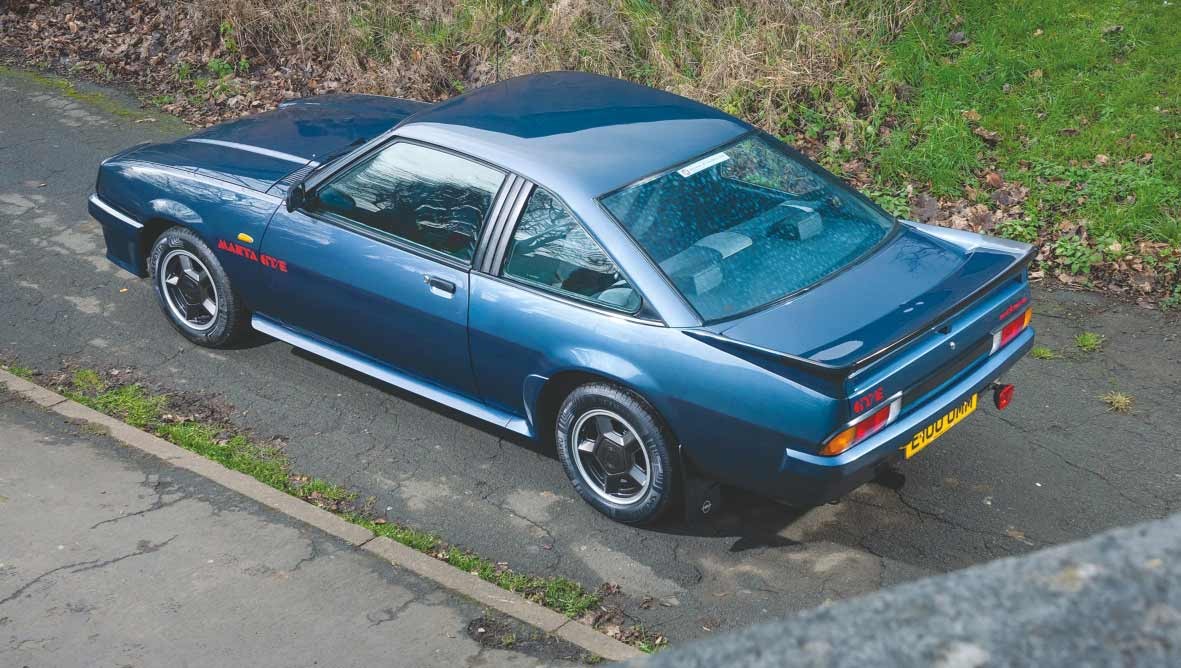 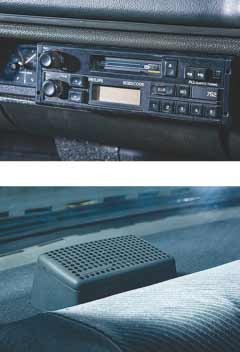 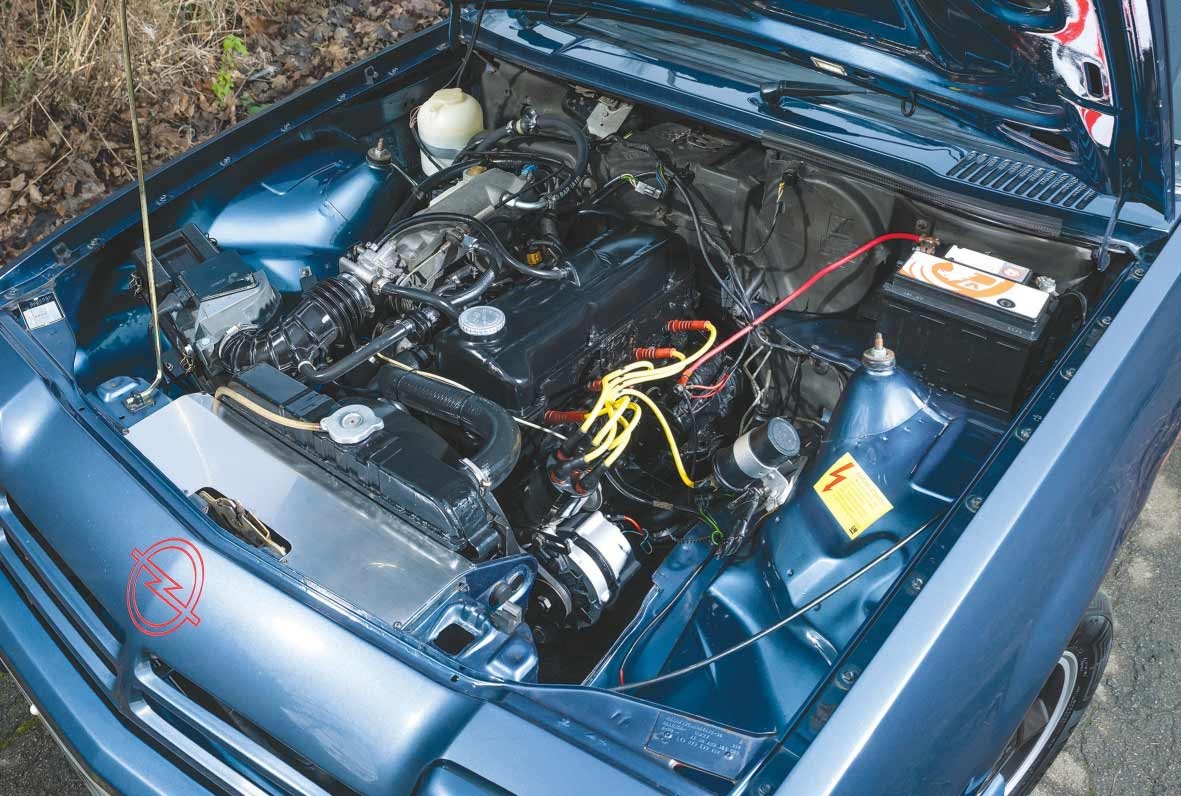 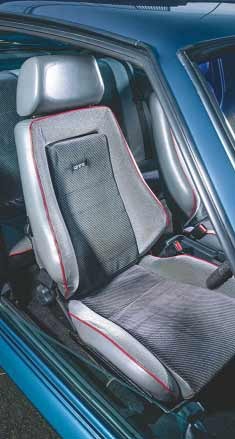 Oh-so-Eighties grey Recaros with red piping and an Irmscher three-spoke steering wheel. CIH engines aren’t bonkers-spec powerhouses of performance, but they remain popular. Is this the best body shape and colour for a Manta B? Answers on a postcard…