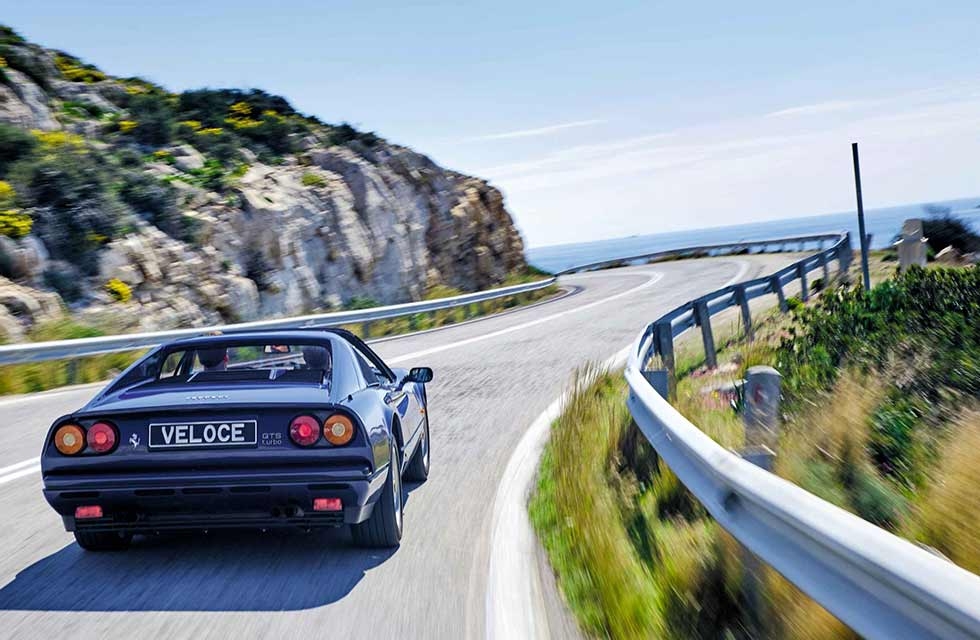 Road test GTS turbo. The GTO’s little brother 208 Turbo on the road. Developed to beat the taxman, this 2.0-litre turbo version of the 308 is an intriguing ’80s Ferrari.

First Ferrari to get a downsized turbo engine was the 208. But can a 2.0-litre deliver true Ferrari thrills? We find out. Words Ben Barry. Photography Spyros Kanatas.

Prince Jefri, the Sultan’s brother, probably didn’t need VAT relief on his new Ferrari. In fact, I’m pretty sure it didn’t even apply in Brunei, but somehow this tax-beating GTS Turbo caught the prince’s eye when he was finance minister of the oil-rich country. Based on the 328 but with the 3.2-litre V8 swapped for a 2.0-litre turbocharged V8, the targa-roofed GTS was shipped from Maranello in 1988 – originally Azzurro, later repainted Le Mans Blue at the factory on the prince’s wishes.

His Highness drove it infrequently, so much so that the odometer read just 3671km when it was sold recently by Veloce Classic and Sports Cars of London. Veloce kindly helped Enzo locate the car and its new owner in Athens, Greece. Now wearing 3845km, it remains surely the most representative, lowest-miles example of the GTS Turbo you’re ever likely to find.

‘The performance figures were damn impressive for the period, especially considering the displacement’

Few visual cues set 328 GTS and GTS Turbo apart; they include extra NACA cooling ducts ahead of the rear wheels, a small (optional on GTB) rear roof spoiler, extra slats in the rear bumper, and Turbo badging out back. But the soundtracks are very different. Close your eyes when you fire the engine and it’s impossible to reconcile the noise from the exhausts with the wedgy, exotic Ferrari 328 body you’ve just admired. With a deep, lumpy, poppy idle, it pulses boisterously through the seatback.

Of course, the driving position is just as compromised as in any 308/328, especially if you’re tall: pedals far over to the right in this left-hooker, knees bent, seatback like an angry masseur’s elbows, arms reaching out straight for the wheel, eyes peering under the header rail. It’s rather like bracing for some horrific impact, and I’m glad we’ve got the GTS with its easily removeable roof – I’m 6ft 1in and the sky provides valuable extra headroom, no matter the noticeable scuttle-shake.

Turbo badging on the right of the dash raises your passenger’s pulse, and a boost gauge that reads to 1.2kg/cm sits at the centre of the instrument binnacle, a bit like a revcounter does in modern Ferraris, only smaller. I slot the gearlever down and left across the gorgeous open gate to select first on this five-speed dog-leg ‘box, ease up the friendly clutch and head out to explore this very special car.

As I pull out, a lorry is approaching from behind, but it’s a long way back. Only, the throttle pedal seems not to be connected, and the lorry looks a lot closer now. My right foot is buried into the carpet, but the lorry doesn’t lift and moves confidently for the overtake…

The significance of the GTS Turbo (and its hardtop GTB sibling) relates not only to this car having royalty in its logbook but its seminal role in the introduction of turbocharging to Ferrari road cars. It was this line that gave Ferrari engineers led by Nicola Materazzi a chance to hone their forced-induction craft ahead of the legendary 288 GTO and F40 turbo V8s. The introduction of the 488 GTB also gives the GTB/GTS Turbos fresh legitimacy – the GTS Turbo was Ferrari’s final series-production mid-engined turbo V8 before the 488.

The story began with the 308 GT4 2+2 and the two-seat 308 GTB of 1975, Ferrari’s first mid-engined V8 models. These had glorious naturally aspirated 3.0-litre engines producing 252bhp and 209lb ft. But the Italian government applied 38 per cent VAT to engines over 2.0 litres, while smaller capacities attracted 18 per cent. Ferrari sensed lost sales…

Just as today’s emissions-based taxation has encouraged forced induction and smaller engines, so turbocharging provided the answer to extracting extra performance from a downsized engine back then. So in 1982 Ferrari hit back with the 208 GTB Turbo and, shortly after, the GTS, just as it was introducing turbo technology in F1. Taking the same basic engine architecture, these models gained a single KKK turbocharger, Bosch K-Jetronic injection, and compression dropped from the 3.0-litre’s 9:1 to 7:1. Power rose to a much healthier 220bhp with 177lb ft. And more was on the way.

The 328 GTB and GTS replaced the 308 in 1986, bringing a 3.2-litre V8 with 270bhp and 231lb ft. A 2.0-litre turbo model continued but now with an intercooler and new IHI turbo, plus new pistons, sodium-cooled Nimonic exhaust valves, a re-designed exhaust manifold and a detonation sensor, though two-valve, twin-cam cylinder heads remained. Badging-wise, the numeric prefix was dropped to leave simply GTB Turbo and – the car we’re driving today – GTS Turbo.

Open our car’s engine cover (complete with bump to clear the intercooler) and the changes compared with a naturally aspirated 328 are clearly visible. The engine – coded F106N – is mounted transversely, as per usual, with one bank of cylinders pointing out towards the rear lights. The single water-cooled IHI turbocharger unfurls from the exhaust manifold on this visible bank, taking hot exhaust gas, spinning it up at 1.05 bar and feeding it towards the Behr intercooler to chill it for combustion. The intercooler is stacked on top of the vee, with ‘Turbo’ lettering across the top, the font stretched by the pure accelerative force of it all.

So that’s what it says on paper. Despite relatively narrow 225/50 VR16 rear tyres by modern standards and more torque delivered lower down than by the 328, the chances of accidentally lighting up a GTS Turbo out of a junction are extremely slim. But how about outrunning that HGV?

First gear feels tall and, even with your foot planted to the floor, almost nothing happens for what feels like seconds. It’s like trying to push a large boulder over a crest: speed’s coming, but not if you give up now. There’s initially an almost complete disconnect between the position of your right foot and the progress of the rev needle.

Thankfully, the turbo kick comes at around 4100rpm, the revs flicking up to 6500rpm with more urgency and the response to throttle movements now far more natural, if still less crisp than with an atmo engine. Though the GTS Turbo never feels exactly rapid in first gear, it’s enough to deprive one lorry driver of a story no-one would believe anyway. Meanwhile, the coarser, reedier note that creeps in at 6500rpm makes that feel a natural point to select second gear.

The dog-leg shift has a two-stage action: an easy slide up to the horizontal plane from first gear at the bottom left of the shift gate, and a much more deliberate, physical action to slot second gear. There are no whooshes or whistles from a sudden lift of the throttle, but, once you’re back on it, the revs are already higher, the gearing feels shorter and you’re more quickly into the meat of the powerband.

The needle in the boost gauge loads up and flicks round to 1.2kg/cm like a channel on a mixing desk overloading, and instead of seconds of waiting there’s a tantalising little pause, then the turbo spools and the performance swells like a football crowd distracting a penalty taker – ‘ whoooaaaaaa’. It feels rich and generous and smoother than any ‘four’ could, if still far from silky, the kick reasonably progressive, not too spiky.

Take it beyond 6500rpm and there’s no screaming pay-off as you might get with a naturally aspirated Ferrari V8, just a more workmanlike willingness to rev towards the 7800rpm red line. Clearly, things have moved on, but worked hard this remains a decently quick car, and by the time we’re into third on the flowing 91 coastal road, the performance is always at the ready, a light little sports car swept along on a juicy wave of boost.

Turbo power also translates well to gentler driving. Despite initial impressions suggesting that nothing happens below 4100rpm, actually it does, because even well below 4000rpm at a fourth-gear cruise you feel the anticipation of the boost brewing, a light hiss building, a certain muscularity to the lower mid-range that felt absent in first gear. There’s also character to this engine. Yes, it’s bassier and gruffer than its attention-seeking naturally aspirated relative, but the two-stage power delivery brings its own excitement, so too the pops and bangs as you downshift, ideally with a double flourish on the throttle to smooth the shift.

It’s definitely an involving process – and the Turbo is quite possibly a harder car to drive quickly than a 328, because the narrower, less linear powerband and heavier turbo plumbing at the rear end – though Ferrari actually quoted an overall 30kg weight reduction – ask different questions of the chassis. Threading quickly through switchbacks, the unassisted steering feels body-builder heavy as soon as more than just a few degrees of lock are applied, weight falls a bit too keenly over the outside front wheel on turn-in, and the mass feels very much centred behind you, in a slightly malevolent way.

Factor in the whooshy delivery and an enjoyable but indulgent gearshift process and I wouldn’t relish arriving at a corner at a speed and a gear too high, then trying to downshift, wind on lock and juggle braking and laggy acceleration to save it all. You need to be smooth and measured, with constant throttle loads and gentle steering inputs, not reactive jabs.

Perhaps it’s the incredible road, the fantastic weather, the fact that this car is bite-your-hand beautiful, but I find myself falling for the GTS Turbo’s slightly oddball charm far more than I’d anticipated. VAT may no longer be a factor, but the money’s quite tempting, too: this car’s exceptional provenance, condition and mileage make it something of an unrepresentative example in terms of its great value, but Veloce says that generally 2.0-litre turbo V8s are worth less than the naturally aspirated models. It’s true: we found GTS Turbos advertised between £60,000 and £82,000, and while 328s do overlap, generally they stretch higher.

Don’t bet against the turbo cars recovering some of that deficit over the coming years on account of their relative rarity. Only 828 GTS Turbos were produced (compared with 6068 examples of the 328 GTS), and they have great contextual significance to both Ferrari’s 1980s turbocharged supercars and its modern re-adoption of the technology.

Crucially, it’s not merely novelty value and historical importance that makes the GTS Turbo such an appealing Ferrari to have in your car collection – it’s because it still entertains and excites just as a Ferrari should.

With thanks to Manos Kountouris and Dimitrios Spyropoulos of Veloce Classic and Sports Cars (veloceclassic. com)

Above and right: Outward changes included NACA ducts just ahead of the rear wheels to help keep the turbocharged engine cool. Second-gen Turbo featured an intercooler, which sat on top of the transversely mounted V8 (right).