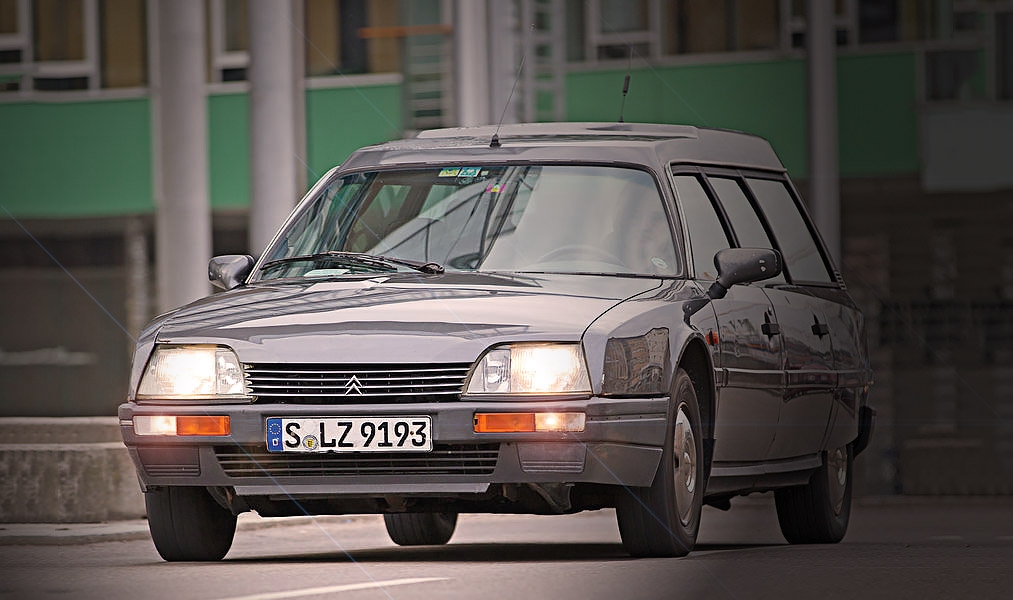 1986 Citroen CX 25Ri Familiale Automatic – road test – family affair. Although first launched more than 41 years ago, the Citroen CX remains basically unchanged. Most versatile of the range is surely the big estate, the Familiale, tested with fuel-injected engine and in automatic form.

The glossy Citroen CX brochure proclaims proudly “…improved, but not beyond recognition.” Perhaps the most remarkable thing about this statement is how true is the latter part, bearing in mind the CX range first appeared in the UK as long ago as 1974. And, apart from a few aerodynamic alterations, the shape of the CX remains basically the same. This says a great deal about the wisdom of the initial concept.

With a wheelbase of 112ins and an overall length of 183ins, the saloon versions of the CX are ‘big’ cars, but add 9ins to the wheelbase and 12ins to the overall length and the result is a really big car, the Familiale. By increasing the length of the bodyshell, Citroen is able to equip the Familiale with a third row of seats, while still retaining 16.2cu ft of luggage space at the rear. This endows the Familiale with the enviable capability of carrying seven adults and an amount of luggage.

Only three Familiale models are available, and two of these are to special order only. The base version is the CX20RE, which is powered by a carburettored 1995cc engine, while the two special-order CX25Ri models use the fuel-injected 2473cc unit. There are two versions because an automatic transmission is available as well as a five-speed manual gearbox. The test car was fitted with the Borg-Warner three-speed automatic gearbox. 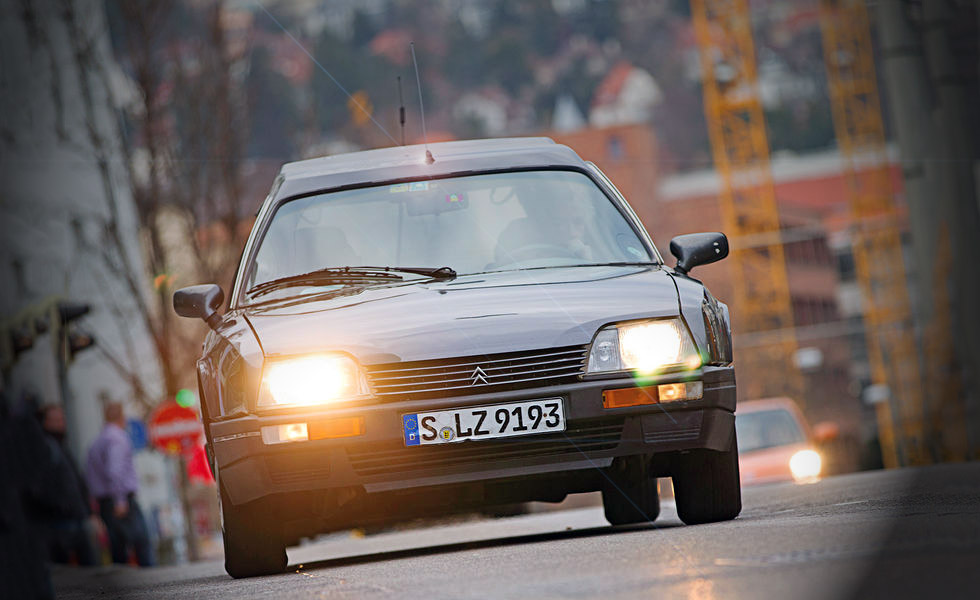 The engine in the CX25Ri Familiale is the same 2473cc (M25-659 engine) unit as found in the CX25 saloons, producing a maximum power of 138bhp at 5000 rpm and developing maximum torque of 155lb at 4000 rpm. The big Citroen took about two laps of the Millbrook high-speed bowl to roach its mean maximum speed of 113mph with a wind-assisted best of 116mph recorded over the fastest flying quarter-mile. These speeds correspond to 5200 rpm and 5325 rpm respectively, just over the 5000 rpm power peak.

The standing start acceleration runs proved to be a fairly sedate experience, but this was not unexpected; with a test weight of just over 1.5 tons, the CX25Ri Familiale is no lightweight. The benchmark 60mph was reached in 11.9 secs with the quarter mile distance covered in 18.7 secs at a terminal speed of 76mph. The kilometre post was reached in 34.9 secs at a speed of 92mph.

These figures were achieved shifting the transmission manually on the redline of 5500rpm, this technique proving to be fractionally faster than leaving the gear in automatic mode. In automatic, with the right foot to the floor, the change-up points correspond to 44mph — first to second — and 71mph — second to top. These both relate neatly to the 5000 rpm peak power point.

Despite the less-than-impressive performance, the CX25Ri Familiale Automatic also returned a rather less than impressive overall fuel consumption figure of 20.4mpg during its 900 miles with us. Taking the calculated Autocar average consumption of 22.4mpg as a more representative figure, a ’normal’ motorist might expect to achieve close to 22mpg, which, combined with the 15 gallon fuel tank, will give a range of just over 300 miles.

The main reason for the poor performance and fuel economy is the power-to-weight ratio, combined with the Cd factor. A ratio of 86.5bhp/ton laden is not particularly impressive, and combined with a Cd factor of 0.37 and an automatic gearbox, it is not an ideal combination. The result is mediocre performance and, by today’s standards, poor fuel consumption for an injected engine.

Climb in behind the steering wheel and the alterations to the interior become obvious immediately. The controls for the wipers, lights and non self-cancelling indicators are still sited to the right and left of the binnacle within fingertip reach while the driver’s hands remain on the steering wheel, and the remainder of the facia is now similar to that seen in the rest of the CX range. The centre console is angled steeply away from the front-seat occupants and gives a far greater impression of space than in the previous models.

Gone is the manual adjustment lever for the suspension height in-between the two front seats; this is replaced by an electric switch set in front of the gearstick on the facia, below the heater and ventilation controls. With the facia raked away from the driver, there is nowhere to fit a radio-cassette player which is accessible while driving, so the Familiale retains that strange Citroen feature of a vertically mounted player fixed into the console which runs between the front seats.

This sounds like a good idea in theory, but in practice it proves difficult to operate as it requires too much looking away from the road for the driver and the machine is upside-down as far as the passenger is concerned, once again making operation difficult.

One very neat feature on this automatic is the position of the gear indicator, to the right of the steering wheel and clearly visible at all times — a much better position than next to the gear stick.

The front seats are typically Citroen: supportive, fully adjustable for position, but perhaps a little over-cushioned for some tastes. They do, however, remain comfortable over long motorway journeys and, combined with the excellent ventilation, make the Familiale an ideal long distance cruiser as far as passengers are concerned.

Driving a Citroen CX of any type for the first time is a strange experience. The steering and controls do take some getting used to, requiring a slightly different driving technique from more conventional cars. Once used to them, though, they become easy and relaxing. With only 2.5-tums lock-to-lock, very sensitive power-assisted steering which is automatically self-centring and a 15ins wheel, straight-line progress can be initially difficult for the CX novice. The classic driving-school ’shuffle’ is the only way to ensure smooth steering.

Front-wheel drive, front-mounted engine and a front/rear weight distribution of 67.5/32.5 per cent make for a car which naturally understeers, especially when combined with the hydropneumatic suspension. This is, of course, a safe and reassuring system in the main, but it does tend to feel a little soggy and inaccurate at times, especially as speed rises. The suspension, however, takes potholes and road surface irregularities in its stride. The only time it seems to be caught out is over a long series of regular undulations, where it begins to ’boat’, front to rear.

One advantage of hydropneumatic suspension on a car like the Familiale is that it is self-levelling, so that it maintains the correct attitude no matter how much the car is loaded, or not, as the case may be. This is especially important when carrying uneven heavy loads.

Seven seats, but without a split on the third row.

The Familiale, however, is not just a simple estate car; it is a large and comfortable people-carrier courtesy of its third row of seats. Access to the rear seats is via large, wide-opening doors and once in the middle row of seats there is sufficient room for three adults. The rear seats are not quite so spacious as far as legroom is concerned, but there is adequate headroom due to the roof height extension which begins above the centre row of seats. There is sufficient room left behind the seats for a reasonable amount of luggage, but if seven people are going on holiday a roof rack will be necessary.

As a people carrier, the 1986 Citroen CX25Ri Familiale fulfils its task admirably and will appeal especially to those drivers who prefer the more conventional looks of an estate car to those of ’tall-vehicle’ alternatives.

Refinement levels are up to Citroen’s usual excellent standards with good all-round scaling and insulation, but the car is let down to a certain extent on the performance and economy fronts. It is one of those cases where, say, a V6 engine might have been a more appropriate way of improving the power, flexibility and fuel economy of what is basically a very accomplished motor car. 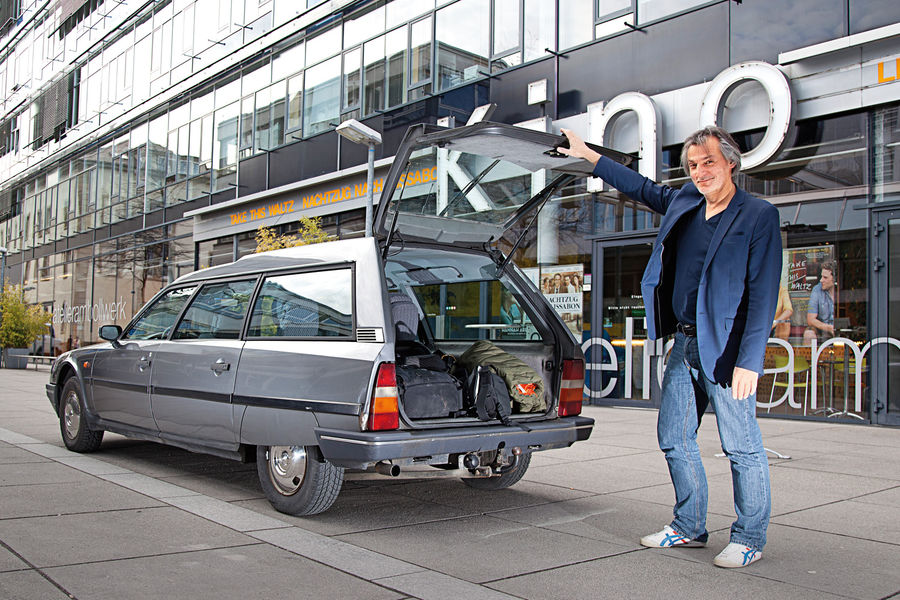 Figures taken at 3,300 miles by our own staff at the Motor Industry Research Association proving ground at Nuneaton. All Drive-my test results are subject to world copyright and may not be reproduced in whole or part without the Editor’s written permission.