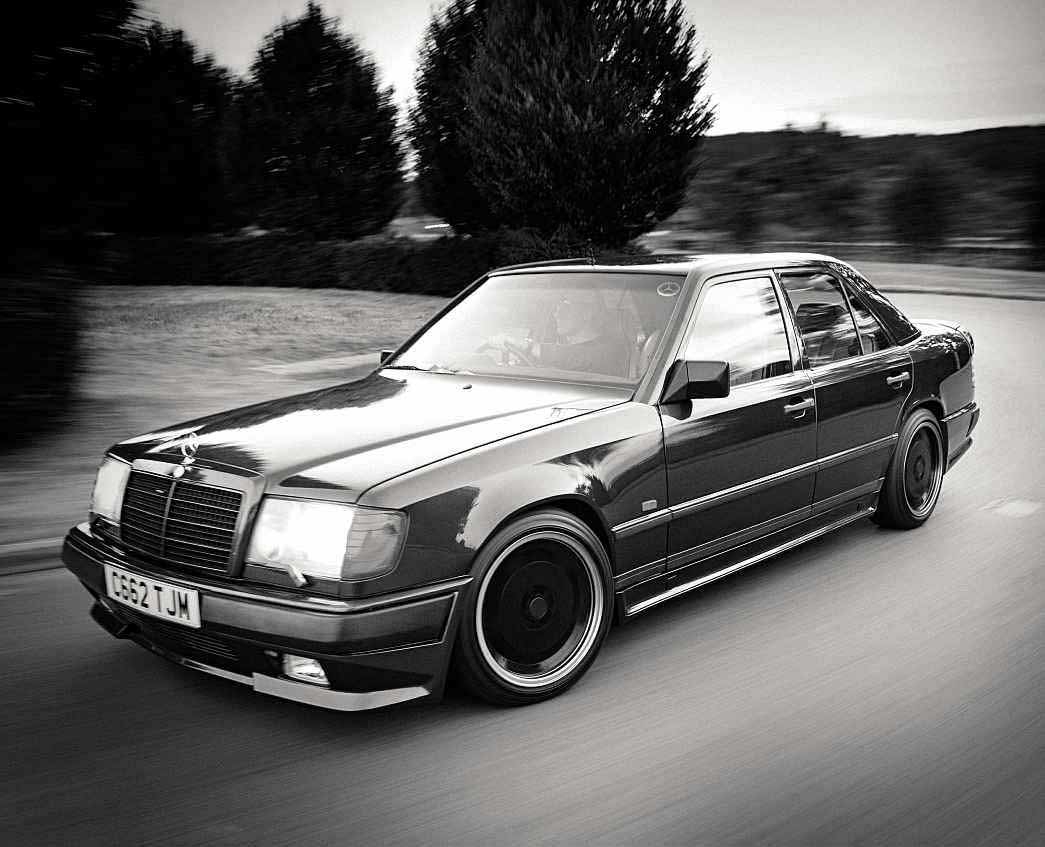 Aufrecht’s Hammer. Sounds like a chapter from the Ring of the Nibelung. You could make something very Wagnerian out of it: Mercedes-Benz’s famous blue Renntransporter driving deep into the Black Forest, with a frightened, white 1985 230E chained on board. The wide-eyed crew unloading it in the gloom, leaving it next to a huge moss-covered rock, then scurrying back to their truck and speeding away before the sun finally sets. The next you know, this glowering, muscular über-Q-car bursts from the forest to the stabbing brass and rushing strings accompaniment of Siegfried’s Funeral March.

OK, that may not have been how Mercedes dropped off its cars to business-suited Hans-Werner Aufrecht and his racing/tuning firm of AMG. But the most shocking element of the story is true – this prototype of AMG’s autobahn-stormers did begin life as a stock W124 230E. You know, the kind you might have found at the time in the taxi rank outside Athens airport or in a manager’s parking space at some Frankfurt air-conditioning company.

But that W124 had two things on its side. The first was that, in those days, Mercedes built its cars – all of its cars – to the highest standard: over-engineered components that lasted for aeons, doors that shut like fortress gates. And the newly designed model had one of the lowest drag coefficients of its day, at 0.28Cd. Furthermore, Aufrecht, Melcher, Grossaspach (or AMG) had been formed in 1967 by a group of ex-Daimler-Benz engineers and had established a formidable reputation for tuning and hooning big Mercs in competition. Think of the Rote Sau 300SEL 6.3 at the Spa 24-hours in 1971 or the flared 450 SLCs both on track and in the Safari Rallies.

Sitting in the AMG Hammer, you can see and feel the dual parentage. Around you on the outside are those polished granite body panels, the makers and the tuners only allowing themselves the merest suggestion of flared wheelarch indulgence. The black wheels and grille signal the machine’s potential and intent, but overall there seems to be a tension between understatement and arrogance. Even so, those sideskirts and spoilers leave you in no doubt as to what this car’s about.

Inside there’s that same dialectic between W124 functionality and premier hot-rodding. Mercedes was never one to oversell luxury accoutrements. Whether you bought the SL, the estate or the S-class you got a similar dash, centre console layout and switchgear, though here the grain of the wood looks a tad finer and the lustre of the lacquer on the gearshift shines deeper.

And although the heating controls look the same as those on the 300TE that the Schmitts have owned for decades (assuming they stumped up for the air-con), those racy cream AMG instrument dials and the spindly four-spoke steering wheel tell you there’s a lot more going on. And notice how snugly those deep-bolstered leather Recaros hold you.

A turn of the key settles any argument about this car’s enigmatic mien. There’s a guttural cough, followed by a low rumble that seems to ripple faintly through the floor. Press the throttle and a throaty, NASCAR-like burble rolls into a growl. And did I detect the merest hint of torque-induced nudge from the engine bay?

When that frightened 230 was left with the meistertuners, one of the first things they did, of course, was to lose the competent but dull four-pot and replace it with the M117 5.0-litre V8 from Mercedes’ S-Class W126/V126. (5.5 W124 1987 560AMG – and 6.0-litre versions would follow.) Mercedes has never been shy about letting a big engine loose in any of its cars, but AMG took the concept further. Taking already-used engine blocks – ‘seasoned’, as AMG dubbed them – the tuners polished, balanced and blueprinted each all-alloy motor. They finally crowned it with a four-valve, twin-camshaft head with hot cam profiles designed by their own Erhard Melcher. This was then stuffed back into the engine bay – and yes, it did fit.

It sounds slightly more lumpy than that standard S-class but, as you (gently) press the throttle, the power just rolls in seamlessly. Never does the motor feel cammy or snappy, nor does engine or transmission (largely standard S-class) snatch or baulk.

Pushed with some restraint, the Hammer is up and away in standard ‘Big Merc’ fashion; the only clue that the V8 has some 380-odd pound-feet of torque stacked in the lower reaches of the rev range (probably better than half the company’s truck range can muster) is that the car answers every nuance of its accelerator pedal immediately. Acouple of tighter low-speed corners tell you that the body isn’t going to roll much: shorter, stiffer springs and valve-adjusted dampers see to that. And, despite sitting lower on its black 17-inch alloys (215/45VR17 rubber up-front and 235/45VR 17s behind), standard-issue Mercedes comfort and smoothness of ride are retained.

But all this ‘carries four in comfort and tractable in traffic’ crap gets old quickly when you can hear an engine that is obviously biding its time until an open road appears. And when it does, you’d better have your wits about you.

Floor the accelerator and, with a well-muted roar, the Hammer hunkers down and blasts forward. It’s relentless and seemingly backed-up by unending power. You’re just thankful that the thing’s blessed with brakes that will haul it back down as rapidly as it charged. The engine sounds maybe more Ford Galaxie 427 than German luxury express, but the stance and feel are very much European Touring Car contender without the rollcage. Remember, the Hammer was hitting the street at the same time AMG had a W201 190E 16-valve sitting in second place in the German championship.

Suspension tuning in that car informed this one. Put purposefully into a corner, the Mercedes will resist with slight understeer – just enough to balance the power in the rear and keep the line clean. Of course, with this much grunt, you can override that at any time, even to the point where, in a long, wide exit, you could kick down and slew the tail into a fierce yet controlled drift. But that’s getting into Gran Turismo 7 territory and a little beyond the usual day – even a Hammer’s usual day’s driving. What you will more readily deploy are the insanely quick yet eminently usable intermediate acceleration times – 20-40, 50-70mph – that, for a second, seem to freeze the traffic around you and put you safely and immediately wherever you need to be.

In all of this – and besides the sheer velocity of the thing – what will greatly impress you is the car’s balance. With AMG’s alterations, the Hammer is nearly 200kg heavier than a standard W124, but that extra mass is well distributed. For example, the V8 is heavy, but quite short, the battery is in the boot, and the rear floorpan reinforced to accommodate S-class final-drive. The result is a car with excellent weight distribution. And though, in luxury car fashion, the steering may not be ‘alive with feel’, the machine goes exactly where you point it and there’s a nice weight to the action. You never feel you’ll catch yourself out with too much heft. Indeed, unlike some tuning shop specials, the AMG Hammer never feels like it will be ‘too much’ – at least, not unless you provoke it. But, until that final nth-degree turn of the controls, you can set all your own limits and dial-in only as much madness as you feel like handling.

That isn’t to say this car won’t always carry that whiff of hot-rodness – its heir is Merc’s own 500E W124, a far more cerebral machine – but the AMG amply fits the brief of the iron fist in the (fairly well sound-proofed and very comfortable) velvet glove. And, perhaps more than any car before it, the Hammer showed there was a place in even the most respectable model line-up for a wide-bodied, big-engined, bad-ass version. All the German manufacturers certainly think so today.

‘Black wheels and grille signal the machine’s potential and intent’