This ‘Monospecchio’ (singlemirror) rhd Testarossa’s Rosso Corsa paintwork is in fantastic condition – there’s no visible corrosion and all of the panel gaps appear straight. There are no signs of accident damage or repair work anywhere, including underneath. 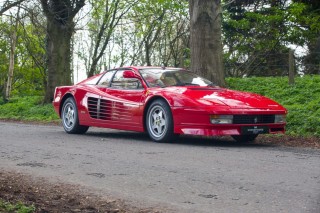 The original single-bolt wheels were compatible only with metric Michelin TRX tyres, which soon became obsolete, but the hubs have since been replaced so they can carry later five-bolt, 16-inch Ferrari rims. This makes it possible to fit more popular and easily sourced tyres such as the Michelin MXX rubber currently adorning the car. All tyres are in good overall condition and show even wear.

The engine bay is immaculately presented and the V12 is exceptionally clean. We found no evidence of any fluid leaks or oil misting from the engine or drivetrain, and all of the ancillaries including leads, hoses and pipework appear fresh and well maintained.

The interior is equally impressive, and thanks to the sparse use suggested by the mileage of 24,000, the ‘Crema’ leather seats and door cards have aged well, as have the carpets, and there is minimal wear to be found anywhere. All of the seals seem to be effective – there’s no evidence of any water ingress or excessive wind noise while driving. All of the switches, gauges and electrics work perfectly.

The engine springs to life on the first turn of the key settling quickly to a healthy idle and there are no unwanted noises, rattles or smoke from the non-catalyst motor. The engine is free-revving, power delivery is visceral but smooth and you really do feel connected to the car thanks to the positive throw of the manual five-speed gearbox, although it does feel a little resistant when cold, which is normal.

Handling is sublime thanks to the factory-correct suspension set-up. The steering is positive, direct and well-weighted, if a little heavy at parking speeds. After some enthusiastic driving on country roads the oil pressure and engine temperature both remained exactly where they should be – 80psi and 190-195°F.

The brakes work well and the car stops effectively without juddering, squealing or pulling to either side. The only fault we could find was an intermittent issue with the throttle which would stick open briefly at times, but we’re told this will be addressed prior to sale. The dealer also said there was a comprehensive specialist service history but it wasn’t with the car at the time of our test. Despite this, the overall condition of the car suggests it has been cherished and well maintained.

If you can abide the asking price – £20k more than our Price Guide lists a ‘concours’ example is probably about right for the mileage and condition – this is a desirable example of the ultimate Eighties icon.

1 The Pininfarina-designed Testarossa was launched at the 1984 Paris Motor Show as the successor to the 512 Berlinetta Boxer.

2 Early US models were slightly down on power and fitted with a catalyst. All European engines received a catalyst from 1989 apart from Swiss and Swedish production cars which came fitted with them from as early as 1986.

3 1987 saw the single wing mirror moved to a lower position as well as the addition of a second passenger-side mirror.

4 1991 was the final year of Testarossa production, bringing total output to 7177 cars.

5 The 512TR was presented as a new car in 1991 but considered a revision of the Testarossa by most. It had the same engine, although reworked for 428bhp and mounted lower down. New grille and engine cover; revised interior. Production ended in 1994 after 2261 units.