One company making dream cars a reality was Carat by Duchatelet. Unlike many of its would be rivals, the firm still exists today

I’m as guilty as anyone when it comes to romanticising the 1980s. When you consider the cars, music, films, celebrities and advances in computing of the era, it’s very hard not to fall into that trap. Yet for all the gloss we like to add today, high inflation haunted the global economy for much of the period and, despite the rich culture we still enjoy from that time, economic strife hung heavy in the air, stripping streets of polish and robbing families of stability. 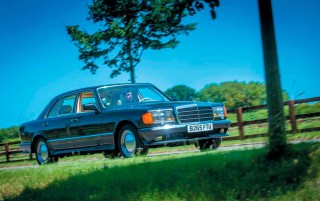 It was hardly the ideal environment for a luxury limousine like the 126-series S-Class to flourish. But flourish it did, shipping to 818,000 homes in the dozen years it graced Mercedes-Benz showrooms as a new car. This was a magnificently expensive machine out of the box, yet that didn’t stop the saloon (and SEC coupe spin off) becoming favourites among the tuning establishment, who saw fit to enhance performance, styling and creature comforts for many more thousands of local currency, to fully satisfy the desires of rich clientele.

One such company making dream cars a reality was Carat Duchatelet, founded in 1966 by Frederic Duchatelet and located in the Belgian city of Liège. Unlike many of its would be rivals, the firm still exists today and still lends its expertise to the creation of hyper luxury, customised Mercedes.

Although it has since branched out to other marques including Bentley, Rolls-Royce and Range Rover, and also creates special armoured vehicles including an impossibly cool Mercedes Unimog complete with .50 Cal machine gun on top, presumably for when your commute becomes particularly tiresome…

Clearly, Carat Duchatelet, as it’s now known, is not your average vehicle modification company and it’s highly pleasing to see it still engages with classic vehicles such as the Lancia Stratos, Porsche 911, Lancia Flaminia and Alfa Touring Spider.

One company making dream cars a reality was Carat by Duchatelet. Unlike many of its would be rivals, the firm still exists today

So, where does the Mercedes-Benz 126 S-Class fit into the company’s history? Following the success of Duchatelet’s first car – based on a Porsche 911 – and rapid economic growth in the Middle East, the company conducted a survey to help decide which car to develop next. As Carat’s website describes, “At the time the Mercedes-Benz S-Class was considered the best road vehicle” but had “a rather austere interior. From this came the goal of the Carat Duchatelet company, to integrate the atmosphere and materials of the English cars into the Mercedes-Benz S-Class. The combination of excellent mechanics with a warm interior offered an exceptional vehicle.” 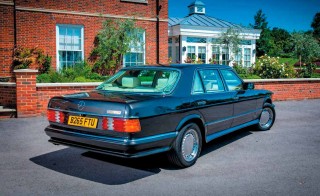 The first S-Class by Carat Duchatelet received a new interior and special paintwork, and was displayed at the Geneva Motor Show to great acclaim, establishing the firm’s reputation as a world class coachbuilder. So much so, in the early 1980s the workshops welcomed Prince Albert II of Belgium. His father, incidentally, was King Baudouin – a man known for his love of luxury limousines including the Mercedes-Benz W100 600, which he enjoyed in six-door form and – rumour has it – with a custom hybrid powertrain.

The subject of royalty is relevant when it comes to our feature car: a 1984 500SEL Carat Cullinan, offered for sale by Mercedes- Benz specialist Edward Hall in Buckinghamshire. “The Carat was owned by a Middle Eastern royal family from new,” explains Edward. “Unfortunately that’s all I’m allowed to say as the family in question are very sensitive and there is an ‘NDA’ on previous ownership. Suffice to say that this Mercedes was owned by an important member of said family. The car was always kept in Paris for use there and chauffeur driven – and always displayed diplomatic ‘CD’ plates. The Cullinan was in use from new until around 2004, when it developed some sort of mechanical issue and was parked and forgotten about.”

That may have been the end of the story, but fate would deal this limousine a helping hand. “The car was discovered by the gentleman brought in to review the family’s financial affairs, who queried the payment for a car parking space in central Paris for the last 15 years,” Edward continues. “When he went to the car park, this is what he found.”

The first S-Class by Carat Duchatelet received a new interior and special paintwork, and was displayed at the Geneva Motor Show to great acclaim

Hall soon got wind of the car and began plotting how to transport it to the UK. “As we didn’t know how difficult the car would be to collect – the hydro-pneumatic suspension had dropped – we collected it from Paris ourselves. We left the workshop at 3am and got back with the car at midnight.”

The Cullinan’s exterior is impressive, but the all original Carat interior is what really elevates this Mercedes-Benz above most other 126s

It is real testament to Edward Hall and his team to find not only a real life Carat Cullinan, but one that is so brilliantly revived. Too easily this car’s originality and indeed provenance could have been lost to a heavy hand in the workshop. “All the restoration work was done in house,” Ed confirms. “The aim was to restore the car as sympathetically as possible, with the minimum intrusion into its originality.

There was a lot of work carried out on the fuel system. Having sat for so long, the tank had to be cleaned out, the metering head and warm up regulator had to be reconditioned, and the injectors, seals and fuel pump had to be replaced. “The hydro suspension had new ball joint gaiters and new spheres all round,” he continues. “In addition there was a major service, brake overhaul, electrical work and some paintwork. The car was built by Mercedes in 040 Black, but during its transformation at Carat it was resprayed in a metallic black.

At first we thought it was very similar to 199 Blue Black, but that colour was not around in 1984. However, we managed to identify the colour and repaint where necessary, and machine polishing the rest of the paintwork.”

So, ‘why the name Cullinan?, you may wonder. This name was probably inspired by the largest rough diamond ever found. Tipping the scales at 3,106.75 carats (621.35g), the Cullinan Diamond was discovered in South Africa on January 26 1905 and named after the chairman of the mine it was found inside: Thomas Cullinan. This name went particularly well with ‘Carat’, for obvious reasons, and is doubly perfect for this example found collecting dust in a Paris car park. It was a true diamond in the rough…

Step within 20 yards of this 500SEL and you’ll realise it’s far from a standard car. The period wheels are German company Ronal’s Centra Type 31 rims, diamond cut and brilliantly reflective. Meanwhile, the bumpers, side skirts and SEC rear boot trim are pure Carat by Duchatelet. It would all be highly bling if it weren’t for the Cullinan’s understated metallic black finish, applied with Carat’s famously secret ‘Japan technique’ involving 48 layers of paint. By the way, that’s not a typo – the company really did apply 48 layers of paint, to achieve a finish like no other. So secretive was Carat about this process, no outsiders, including motoring journalists of the time, were allowed to see painters carry out the work, nor were any details about it released.

The Cullinan’s exterior is impressive, but the all original Carat interior is what really elevates this Mercedes-Benz above most other 126s. Exquisite leather covers practically every surface, including the dashboard, headlining and resculpted seats, while the restyled centre console sports a period correct Pioneer stereo arrangement with graphic equaliser. Underfoot are lambs wool floor mats, and in the rear occupants are treated to gorgeous tables trimmed in walnut, this rich material also accenting the doors, dash and centre consoles. There are even foot rests trimmed in thick lambs wool. Simply put, this is the most luxurious and beautifully trimmed 126 S-Class I’ve ever laid eyes on.

It’s very hard to disagree with that logic, especially after you’ve spent quality time in this car’s presence. I’ve come across Mercedes from Carat before, but none have quite this SEL’s depth of quality. With its 56,000km (near 35,000 miles) showing on the custom Carat clocks, not only is this car an extraordinary example of the 126-series S-Class, it’s an enthralling artefact from a Belgian coachbuilder’s history. Times may have been tough for many during the 1980s, but my goodness we didn’t half get some things right…

Front seats were upgraded to suit the trim. For extra privacy, curtains were also added. Additional splitter was part of the package.

The polished wheels suited the export market. Some small badges to remind others it’s special.

Rear cabin is the finest of luxury even now. The period Nokia phone remains in place.

Upgraded stereo system was cutting edge. The rear is an inviting place to be, fit for a king. Original V8 was one of the few things untouched.

Up front is nice but it’s suited to a chauffeur ideally.

Extras such as the fold out tables are quaint. Even the clocks had been given an updated look.