Announced in the middle of last year, it has been built in such small volume, to special order, that no test car became available until the middle of 1984.

There was also, of course, the question of cost: because any company must think twice before building a R70 000 super- performance car for the press to assess. So easy to damage, so expensive to fix, and was It really necessary to prove the excellence of the top car in the range? Certainly there was no hurry, until the performance capabilities of the 745i came into question, by implication.

CAR had declared the Alfa GTV6-3,0 the fastest South African built car in a test published in April this year (1984). And BMW understandably saw this as a slight on their 745i, for which they had claimed (on announcement) a top speed of 240 km/h – comfortably ahead of the Alfa’s (tested) figure of 224,2.

Within weeks of BMW’s protest reaching CAR – and before it actually appeared, together with our reply, in “Forum” in the June 1984 issue – a test car became available in Cape Town and CAR became the first publication in the world to test a South African built BMW 745i E23. And the test proved BMW’s point. The car is almost all they said it was and its top speed of 235,6 makes it the fastest car built in this country.

The “South African” qualification is doubly important, here. Because the car not only proves what can now be achieved by a local manufacturer, with technical back-up from the parent plant. It is substantially different from the 745i produced in Germany.

Whereas the Pretoria-built car is powered by a six-cylinder, 24-valve, naturally aspirated version of the 3,453 cc M1 E26 racing engine (which has been appropriately detuned for road use), the Bavarian 745i E23 uses a 12-valve turbocharged “six” of 3,430cc — the same basic unit that is used, without a turbo, in the BMW 735i E23 in this country.

Although the point might prove a trifle sensitive at BMW’s German HQ, there are those who believe that South Africa has the better, more tractable car and while we have not driven the German 745i E23, our test suggested that this might well be so. The local car is almost certainly the faster – World Cars quotes a top speed of “above 227” For its German-built “rival” – and this is 8,6 km/h slower than the figure we achieved.

Buff, hand-stitched leather is used to create an unusual interior with flair (top) and the power- adjust front seats have three “memory” settings. The twin halogen headlights facilitate fast night driving (above). The engine hay (below) is superb – meticulously planned to avoid clutter despite the complexity of the computer-managed machinery.

That 24-valve motor is superb: so tractable you can pull away smoothly in third, yet packed with enough back-clouting urge to catapult this 1,720 kg luxury model to 100 km/h in a whisker over seven seconds, or to the end of the standing kilometre in 27,84, with a terminal speed of 192 km/h…

Our deep maroon 745i E23 was equipped with a manual transmission — the close-ratio sports box available as an option in the 535i E28 — and its interior was upholstered in rich buff leather, hand-stitched to form a discreet but decorative finish.

Relieved by black panelling and a charcoal carpet, it combined traditional craftsmanship with sound modem design to give a. spacious, restful effect – in excellent taste but with perhaps just a suggestion of flamboyance, as befits a car of this kind.

Distinctive it surely is, for there are few cars in the world that combine such effortless, scintillating performance with such roomy and refined comfort.

The BMW 745i E23 SA development project was the most advanced engineering exercise ever undertaken by BMW SA – the first tangible result of a major expansion in the local company’s development capacity which involved the transfer of more than 50 German engineers and technicians from Munich to Rosslyn. It was also the product of a personal enthusiasm on the part of Dr Eberhard von Koerber, the I previous managing director of BMW SA (who was succeeded by Dr Walter Hasselkus earlier this year), and of his long standing friendship with Paul Rosche, who heads BMW’s Motorsport Department. Rosche, who designed the original M1 engine, and has been developing it ever since, supervised the 745i adaptations alongside his work on BMW’s F1 turbomotor, which powered the 1983 Driver’s World Championship winning Brabham of Nelson Piquet.

Refined, sporting power plants have always been at the heart of BMW’s reputation but the spectacular results obtained by Rosche in this “road” version of the M1 “six” must surely rank among the very finest. Docile or wild on demand, it seems just as happy to waft the car along with silky grace at 60 km/h, in virtual silence, as to charge, at the prod of the pedal, with all its fury unleashed. Perhaps its greatest charm is that it has an elastic feel: even when fully ex- I tended, it does not feel pressured — rather released… and the sophisticated 7-Series E23 chassis absorbs its power with disciplined ease.

I The extreme sweetness of the motor stems from the fact that while 213 kW is enormous power by normal road- going standards, it represents only a fraction of what this engine can deliver when its teeth are sharpened for competition. Developed for Group 5 racing, ’for example, it gave 600 kW — so in developing special camshafts for the South African 745i, Rosche was able to achieve good low speed response and exceptional flexibility, yet still have really husky urge on tap.

As is widely known by now, the engine also gains in refinement from the use of the Bosch DES-2 management system, in which a computer co-ordinates injection and ignition systems to yield optimum output characteristics.

The 745i E23 interior features all the refinements available on other 7-Series E23 models, with the addition of its sumptuous, hand assembled leather upholstery and an exclusive instrument cluster in which both the 280 km/h speedometer and the tachometer carry discreet Motor- sport insignia.

The soft leather extends to every part the interior except headlining, car- Pet and control panel surfaces — even to pillar trims, handbrake handle and gearshift knob – and BMW say the locally derived skins are far superior to what is now available in Europe. In the 745i E23, the electronic front seat adjustment has a “memory” which is simple to use and recalls up to three distinct position combinations, on demand. 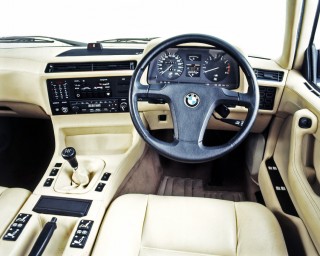 At first glance, you might mistake the car for one of its 7-Series stablemates, because the simple, boot mounted 745i insignia represents a degree of muted understatement. But then the enormous rubberware, alloy rims and low, mean stance register…

On the road, the car is breathtaking – a word we reserve for rare occasions. Your aunt Sara might use it to run down to the supermaket without ever realising what she was driving – it would appear refined and surprisingly nimble for its size, but otherwise unsurprising. But in the hands of a man who loves driving fast cars, it’s something marvellous – but an experience unfortunately reserved for the few who can afford it.

As our performance tables show, the BMW flagship is impressively quiet, recording only 68 dBA at a steady 100 km/h. And its “overtaking acceleration” is truly athletic for so large a car, making it unnecessary to paddle the gearshift for brisk manoeuvres, if you’re not that way inclined.

Its fuel consumption, too, shows how efficient, a 3,5-litre twin-cam motor can be, when its accelerative powers are not being used: ranging from 8,45 litres/100 km at 60 km/h up to 11,08 at 120. Over more than 100 km of vigorous motoring, including our high speed tests we recorded an overall fuel consumption of 15,9 litres/100 km, but this can be taken as an extreme: the ordinary motorist would improve on this significantly.

Handling, braking, comfort and ride quality are up to the price of the car – and so is the finish, with a minor reservation about small areas of the paintwork, which revealed some signs of light orange-peeling. While some people — including one of our testers — would prefer more chassis feedback, we feel most buyers of this type of car will enjoy BMW’s “cocooned” ride refinement — which is a characteristic of this model, despite its ultra low profile tyres.

At the end of our test, we had only two significant criticisms to offer: the sun-visor needs to be deeper, to meet the needs of small to average sized drivers, and the lack of a satisfactory place to rest the driver’s left foot scorns a silly slip which looks easy to put right.

What a car. What an experience…

The soft leather extends to every part of the Interior except headlining, carpet and control panel surfaces…