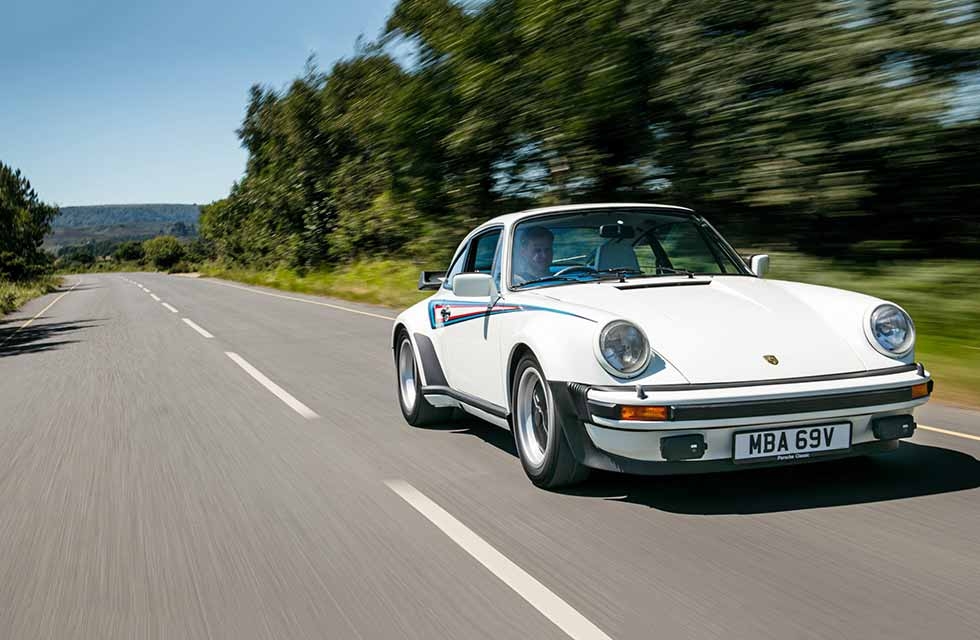 Martini 930 The Editor explores the history of Martini and Porsche with a drive in a rare 930. Drive-My samples a unique 930 exquisitely blending the most famous of automotive pairings Written by Lee Sibley. Photography by Ali Cusick.

THE MAGIC OF MARTINI

As combinations go, Porsche’s link-up with the Italian drinks company Martini & Rossi is one of the most decorated across the entire automotive spectrum. A formidable partnership that’s bred much sporting as well as commercial success, the two entities now enjoy an association as ubiquitous as thunder and lightning, salt and pepper or, if you’re of an English persuasion, fish and chips.

This most famous of pairings can be traced back to 1968 and Germany’s Hockenheimring, when Martini stickers were placed on a Porsche 910 run by Scuderia Lufthansa Racing Team. Porsche therefore became the first manufacturer to wear Martini’s famous red-and-blue stripes, marking the start of a relationship which runs in some degree right to the present day, minus a small hiatus in the mid-1980s when Martini partnered with Lancia for Group B rallying, Porsche in turn uniting with Rothmans cigarettes. Regardless, delve through the history books and it won’t be long before you’ll find Martini Racing’s livery streaking over a Porsche race car in all manner of sporting competition, from rallying to GT racing to, of course, prototypes at Le Mans and Daytona.

It was at La Sarthe where both Martini and Porsche first tasted victory together, courtesy of Gijs van Lennep and Helmut Marko’s #22 917K in 1971. Although that particular car would never race again – due to its magnesium tubular frame, which was filled with pressurised gas, essentially turning it into a missile guided by an on-board human – chassis 917-053 was the start of a rich vein of decorated Porsche race cars bedecked in the visuals of Turin’s most renowned drink. The lineup is quite something: think Targa Florio-winning ‘R6’ RSR, the 2.1 Carrera Turbo RSR 2.1 which battled to second overall at Le Mans in 1974, the SC driven at the 1978 East African Safari by Björn Waldegård, Moby Dick, 935 Baby, the 936/77 piloted to Le Mans success by Ickx, Barth and Haywood, the list goes on and on.

Even today the relationship is enduring, though it’s arguably a less glamorous marketing exercise from both sides. You can buy a rain jacket, towel or coffee cup from Driver’s Selection if you like, or for slightly more investment on your behalf there’s a Martini Racing Edition 991.1 Carrera S. Released in 2014, the Martini decals attached to an otherwise-stock C2S would have set you back £102,862 for this ‘special edition’, though your saving grace is only 80 models were made worldwide.

Luckily the 1970s provided a road car with a more credible tie between the Italian beverage company and our celebrated automotive concern from Swabia. It’s the 930 Turbo Martini Championship Edition.

Revealed at the London Motor Show in 1976, it was built to honour a successful year for Porsche in motor racing. The works team had claimed the World Championship for Manufacturers with its 935 and World Sportscar Championship with a 936 – both cars were adorned with the famous stripes of Martini & Rossi. The 930 Turbo was a 3.0-litre, whaletailed example, its Martini body stripes signifying a new option (M42), available only for 930s in Grand Prix white. It is believed only 200 were produced worldwide between 1976 and 1979, by which time the Turbo had been upgraded to 3.3-litre specification, complete with a new tea tray spoiler design to incorporate an intercooler – the latter a first on a production road car. The official numbers game though is a little distorted because the Martini stripes were easy to replicate, which many did, on SCs as well as Turbos.

These tributes are not to be confused, however, with the original, full-fat special editions sporting a complete Martini-inspired interior, such as the example in our pictures. The car is currently owned by Paul Pressland, a devout Porsche enthusiast who has a family link to the 930 Martini Championship Edition. “My father purchased the London Motor Show car in 1980 and drove it for a few years,” he says. Clearly enchanted by the car and its personal link, Paul could not pass up the opportunity to follow in his father’s footsteps by acquiring his own 930 Martini Championship Edition in 2018. Part of a wider collection of Stuttgart’s finest prancing horses, the Martini Turbo is clearly a favourite for Paul, who’s adamant it should be driven as intended.

Even better, he’s offered to let us drive it ‘as intended’ for the day. Being a 1979 model year example, it’s one of the aforementioned 3.3-litre Turbos with 16-inch Fuchs wheels wrapped in Pirelli P7 tyres, which had by then replaced Cinturatos.

Martini’s signature stripes run down either side of the Turbo’s wide-bodied, Grand Prix white coachwork, while inside the Martini tri-colour is lavished across its entire interior. A black leather wheel provides pretty much the only respite from an onslaught of red, white and blue – it sounds garish, but in fact it’s absolutely gorgeous. A special car deserves a special interior, after all.

A pair of Fuhrmann orthopaedic seats take pride of place up front, their individual cushions sticking rigidly to the red, blue and white interior colour scheme. There’s a gold plaque above the four-speed shift knob, and the Martini-specification Turbo features higher-grade carpet and trimmings too. Otherwise it’s standard Turbo fare for the model year, with electrically operated windows, a four-speed gearbox and a boost gauge newly located within the central VDO clock.

To drive, the Martini is forthcoming with its usual Turbo traits – think comedy lag to three-and-a-half grand, back-slinging inertia thereafter and gearing longer than a summer’s day in Scandinavia. A drive which requires thought and, at times, a great deal of guts, it’s a frankly brilliant mix and serves up arguably the most entertaining Turbo experience of any generation before or since.

This particular car has its glorious flat six soundtrack punctuated by a lively exhaust which spits and pops delightfully at every opportunity, its noise as colourful as that Martini interior. I’m lifting off through town just to hear it in action, each pop a bassy chime among the air-cooled flat six’s machinegun chorus.

The ride, too, serves another pleasant surprise. Supple enough to glide over the many imperfections of our coastal road’s surface, it simply belies its 40 years of age. There’s no crashiness to its damping or slop to the steering, normally a forgivable indicator of tired, four-decades-old chassis componentry. It’s all in fine fettle here, meaning I’ve a better chance at keeping some sort of semblance to the Turbo’s extremely rear-biased dynamics – the engine alone weighs 230kg.

There’s no power upgrade within the Martini Championship Edition’s repertoire, though it’s not exactly lacking for it. 300hp is delivered to the rear wheels in an age where traction control came in the shape of your own driver discipline. As with any classic 911, the steering constantly flicks between going extremely light under acceleration – exacerbated by the turbocharger’s ability to throw the car right back onto its rear haunches under full boost – before loading up forcefully under heavy braking as weight is transferred forwards. Managing the throttle and steering accordingly is crucial if I’m to stay out of the many hedgerows lining these winding country lanes.

The brakes, derived from Porsche’s 917 race car, boast ventilated discs and grooved calipers for better heat dissipation, though there’s still a noticeable lack of bite compared to today’s machinery, which means they require a firm leaning on to scrub speed effectively. In reality it only adds to the fun: I’m certainly no Gijs Van Lennep or Jackie Ickx, but my drive in this Martini-clad 911 is evocative to the exploits of those heroes in my mind.

The 930 Martini Championship Edition doesn’t need a numbered build run to feel innately special. Released three years before the creation of Porsche’s Sonderwunsch department, the 930 Martini represents quite the effort from Porsche to offer its customers a little something extra – provided they were willing to pay for it. And so it proves today: the wide hips of a 930 Turbo are alluring as it is to the eye of any automotive enthusiast, but throw in the famous Martini Racing tri-colour and you’ve got possibly one of the most universally desired classics, at least one with a Porsche badge affixed to its nose.

Its rarity means this is a car that will always hold appeal among collectors – making the current owner’s desire to drive it as intended that much more admirable – but as with any 911, the Martini Championship Edition is far more than that. Celebrating arguably the most evocative of partnerships in the history of motorsport, this special 930 offers a glorious way to drink in the delights of the Porsche Turbo while sampling the full flavour of Martini magic – shaken, of course, not stirred.

BELOW The 930 3.3’s intercooler was the first to be fitted to a production vehicle, lowering intake temperatures by up to 100-degrees. ABOVE Comedy boost and tricky handling marks the 930 out as one of the most entertaining 911s you can hope to drive. The Martini Championship Edition’s visual flare adds to this excitement behind the wheel. BELOW The Turbo’s interior is dedicated entirely to Martini’s famous tri-colour scheme.

Dr Ernst Fuhrmann was a talented man. Responsible for the conception of the 2.7 Carrera RS and the 911 Turbo itself, the Austrian engineer was to lead the company as CEO in 1970 when it was decided the Porsche family would relinquish its day-to-day control. He did so admirably, albeit with a nagging back problem, fuelling his desire to deliver a supportive sports car seat which catered for customers with similar osteopathic concerns.

A seat was duly unveiled at the 1976 London Motor Show in the very car you see here – the 930 Martini Racing Edition. Officially named ‘Porsche orthopaedic seats’, it is fitting that the rather naff title has since been colloquially swapped out by enthusiasts in favour of a name directly referencing their esteemed creator. The optional ‘Fuhrmann seats’, as they are now known, were essentially Sport seats with two cushioned pads on their base, with two more padded blocks in the backrest which forced the occupant to sit more upright. A £1,800 option at a time when the average house in Britain cost £12,689, their hideous price tag meant they weren’t especially popular, though they were a brilliant marker of a man keen to offer more to Porsche’s discerning customer base.