There’s an age-old maxim that you’re no doubt familiar with: ‘speak softly, and carry a big stick’. It actually dates back to the presidency of Theodore Roosevelt, but it’s perfectly represented by the Mk2 Estate you see here. This is a car which doesn’t need to shout about its performance credentials – it makes a statement on the showground by virtue of its gorgeous finish, serenely sunning itself as admirers swarm around like bees to a honeypot. But make no mistake, there’s robust fi repower lurking within. 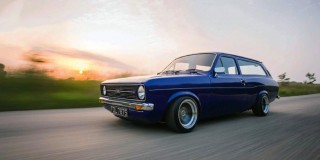 When you pick through the motoring history of its creator, Dan Dutch, the logic of it all starts to slot into place. “With a family into autograss and autotesting with classic Minis, it was pretty clear I was going to start out with a Mini,” he recalls. “But I’d always had a soft spot for the classic Ford scene, ever since my Dad had a Series One RS Turbo when I was 10; that turbo burble takes me back even now! I had a few older mates who all had Fords, Escorts and Fiestas, so I was always around them.”

Dan used his Mini to commute to the garage he worked at in Newport (Isle of Wight, that is, not Wales), and after a few years he learned that the barn next door was full of ex-military stuff: Green Goddesses, tanks, assorted massive engines… and tucked away in a dark corner, on a flatbed truck, a black, island-registered Escort Estate. 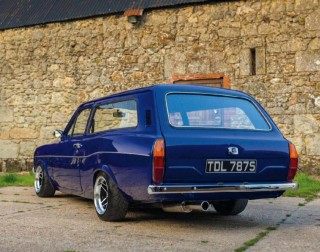 “It was covered in an inch of dust and grime, you could barely see the car as it was dark and damp,” he recalls. “At the time I wasn’t that interested as we were restoring my Mini, but by the time that was finished and featured in magazines, people started asking what was next on the project front, and I kept thinking about that Estate in the barn. After 10 years of working at the garage I decided to hand in my notice, but before that I thought maybe I should go and ask about the Estate — so one lunchbreak I popped in and asked the question, ‘Would you sell the Escort?’ The old boy replied ‘What do you want that old crap for?’”

Laughing, Dan immediately proffered some cash but was told that if he could get the car out, he could have it. So he duly called a mate, Martin Goddard, to come with a beavertail and mount a rescue mission. The lads were a little surprised to find the Escort sitting on a couple of RSJs rather than the truck bed as assumed, which caused no end of hassle in liberating it, but the risky and hugely physical process paid off as they eventually got it on the loader… whereupon they spotted that the car’s roof was caved in! Apparently, the barn roof used to leak, and so the Escort was simply used as a step to reach up and fi x it. But Dan was in for a penny by this point and keen to get cracking, so it was transported home where he could jetwash off the dust and grime and see exactly what he was looking at.

“The tax disc in the window was from 1991, the year I was born!” he says. “My girlfriend, Tina was OK with me buying another project as I convinced her it would only take a couple months with a few repairs here and there to get it roadworthy; little did we know the work that would be involved. Someone at some point had welded two outer sills on but not ground down the welds, so the new panel was covered in rust and the doors weren’t sitting properly. The inner sills were shot, as were the front floors and A-posts. A wing had been welded to a very rusty front panel, and at the back it had various holes and patches that needed tidying up.” 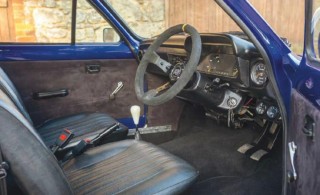 On the whole, it was exactly the sort of Escort you’d expect to find in a damp barn. What Dan hoped might be a quick patch-up turned into a full bare-metal stripdown. Having the shell on a spit made the roof easier to push back into shape, and then all of the underseal was laboriously ground off before the welding marathon could commence. Working as a team, Dan took care of the plate and panel work while Martin set about welding and grinding to make everything seamless — a mighty task that led to no end of sleepless nights.

“While it was still on the spit, I decided to spray the underneath and inside myself to save some money,” Dan continues. “It came out so well that I decided to have a go at spraying the exterior too, as a few local bodyshops said they were busy and that it could take ages as it’s a big job. So I bought one of those pop-up car port tents and some heaters, along with some big fans for extraction — and just went for it! I was dead chuffed with how it came out.”

Rightly so, as it’s a spectacular finish which really does accentuate how straight and true the bodywork is after all the boys’ endeavours. And with the shell complete, it was time to refit all the bits they’d removed, which by this point had all been blasted by Martin at MJG Grits before being sprayed by Dan and bolted back in. So a fabulous shell was sitting there ready for hi-jinks, but what to do about motive power?

Thankfully Dan’s DNA came into play at this point, as his surname is the key element you’ll find in Dutchspeed Racing. His Dad, Dave, along with Uncle, John Dutch, have over 40 years’ experience in tuning A-Series engines, and were amused by the challenge of a Pinto. At first, this seemed like a needlessly big and heavy motor compared to what they were used to, but they relished the task. Dan was keen to point out that he didn’t want a race motor, but a fresh fast-road build with decent usability, so Dave started by porting the head and matching the inlet and exhaust manifold to it, along with fitting big valves and a hot cam. “He admits it’s a nice head,” Dan grins. “Uncle John then had the job of putting it all together with new bearings and ARP bolts. Dad also lightened the flywheel and balanced it with the clutch assembly, and once this was all done it was time to drop it in the hole so John could make a new wiring loom. It took some fiddling and wrapping and unwrapping, but we finally got there.”

When everything was back together, the car took a quick ferry ride to the mainland for a rolling road session — netting a healthy 160 bhp and 148 lb.ft — and since then we’ve spotted Dan at the Retro Rides Weekender at Goodwood, running up the strip at Santa Pod, and generally using the car for what it was built for: open-road adventures.

“After all the work, I’m just planning to enjoy it, taking it to all the mainland shows and driving it around the island whenever I can,” he assures us, which is great to hear.

This is a car that speaks so softly, you’re hardly aware of the big stick at all — but Dan’s having a lot of fun shaking it about.

WHAT LIES BENEATH UPRATING THE UNDERSIDE 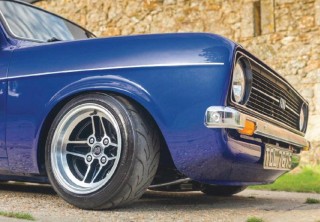 This ex-MoD Estate may have started life as a humble 1300, but the transformation at Dan’s hands stretches further than simply what’s under the bonnet. The chassis has been comprehensively reworked, with RS-type front struts converted to coil-overs with GAZ adjustable inserts, decambered leaf springs, GAZ rear dampers and anti-tramp bars, along with an RS steering rack. Naturally the brakes have been addressed, with M16 callipers, braided lines and a bias pedal box, and there’s also a 3J Driveline LSD to keep Dan entertained. It may look relatively stock from the outside, but the spec of this car would have made its original designers spit out their tea in astonishment.

The Estate still has its original seats, with Dan retrimming the interior panels in black suede.

Dan’s got the ride height spot-on, with those 7.5×13 inch RS four-spokes tucked into the front arches using coil-overs.

Dad and Uncle were happy to put together a tasty 2-litre Pinto for the Mk2.

Group 2-style manifold has been heat-wrapped to keep those underbonnet temperatures down.

Almost obligatory 45 carbs have been detailed by Dan.

With his Mini rebuild finished, Dan needed a new project and this Estate looked like it fitted the bill….

With the shell sound again, Dan decided to paint it himself in a pop-up garage — with great results.

Then the refit could begin, with the running gear replaced, refurbished or uprated where required.

The body wasn’t quite as good as Dan had hoped, but nevertheless he steamed into repairing the rust.

The front end typically needed huge amounts of work, with new wings and front panel on the shopping list.

Stored at the back of a workshop on RSJs, extracting the Mk2 proved tricky, but then the car was free… 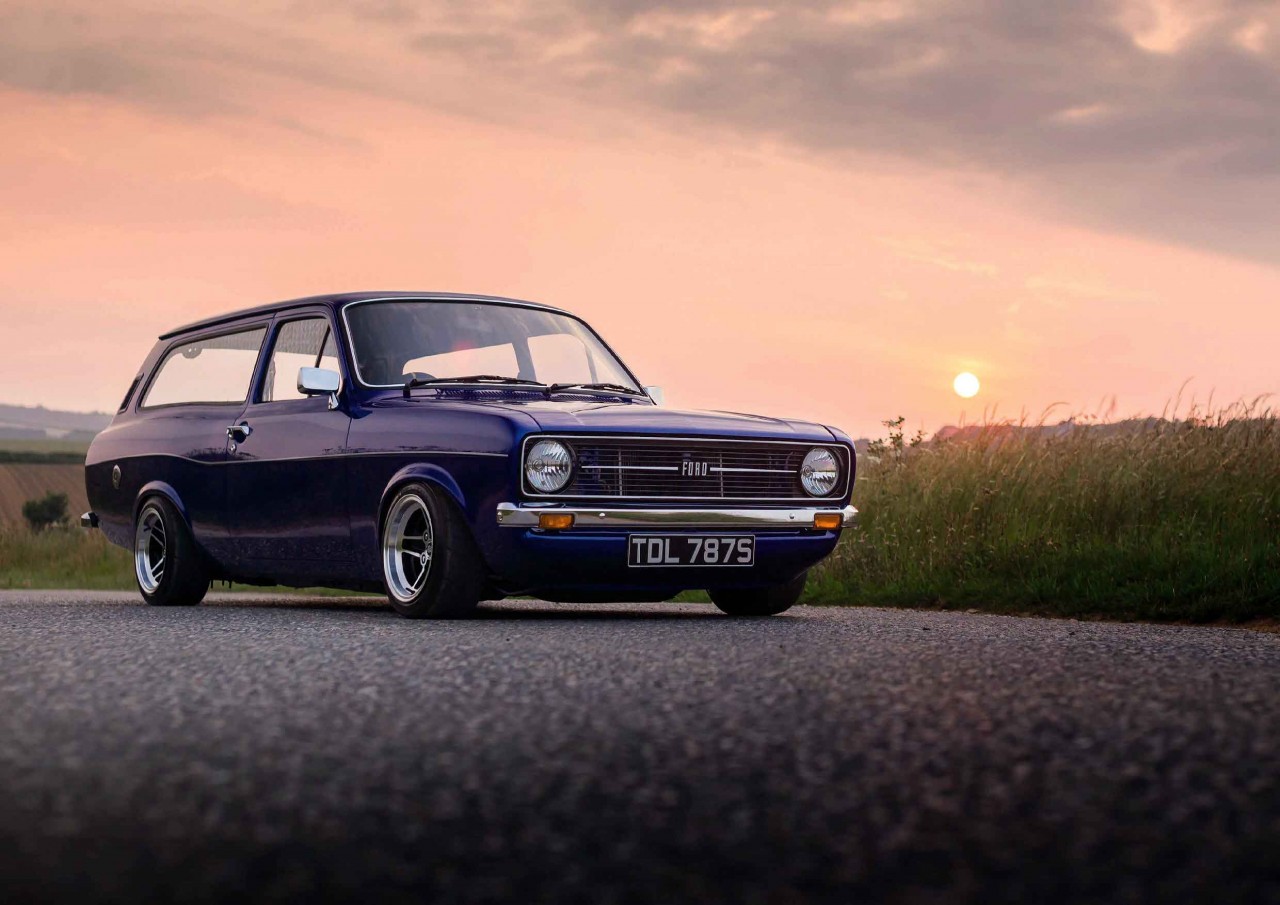 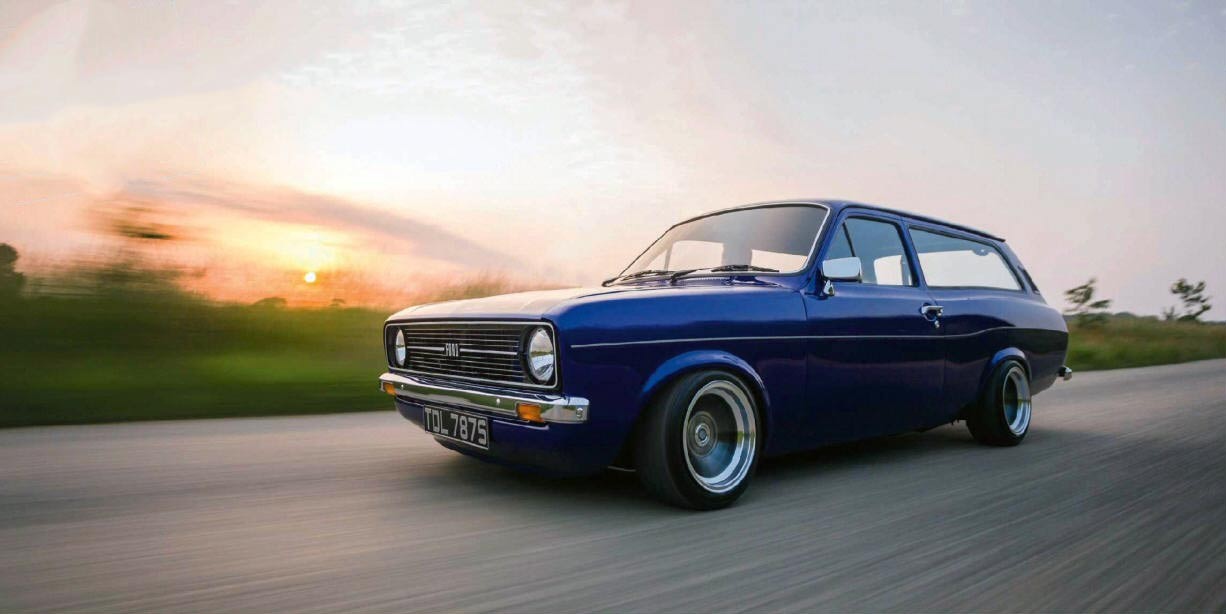 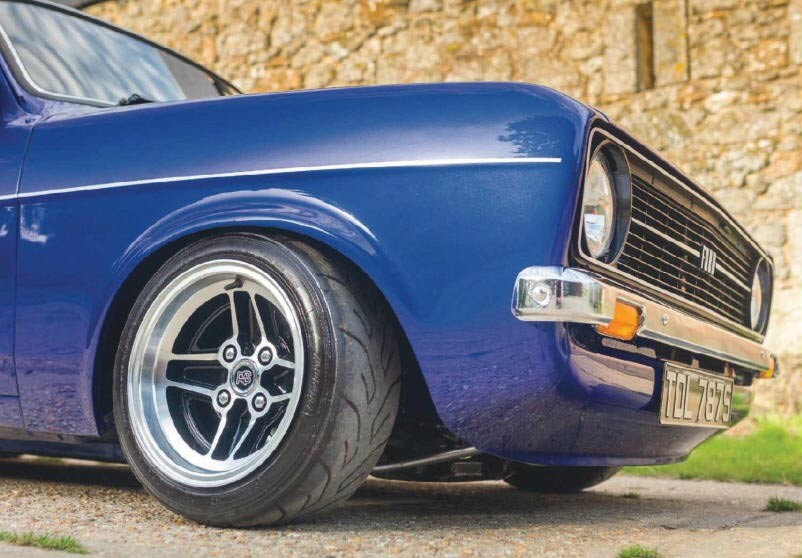 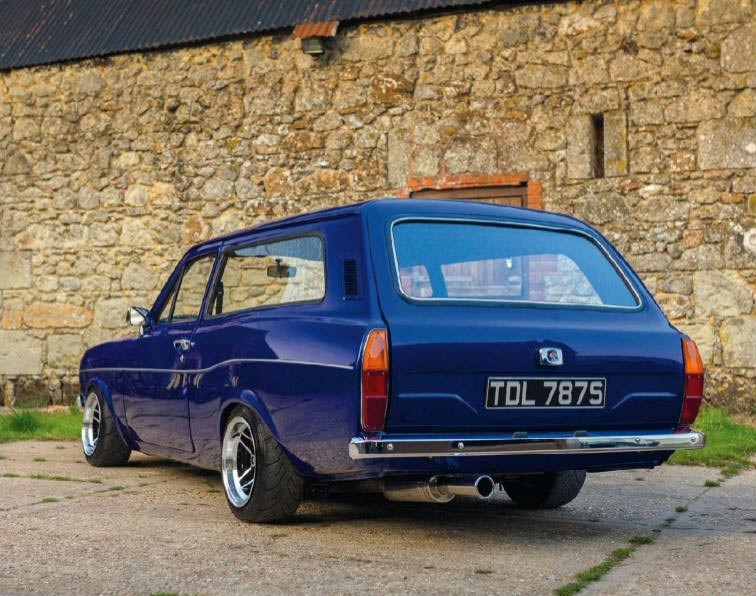 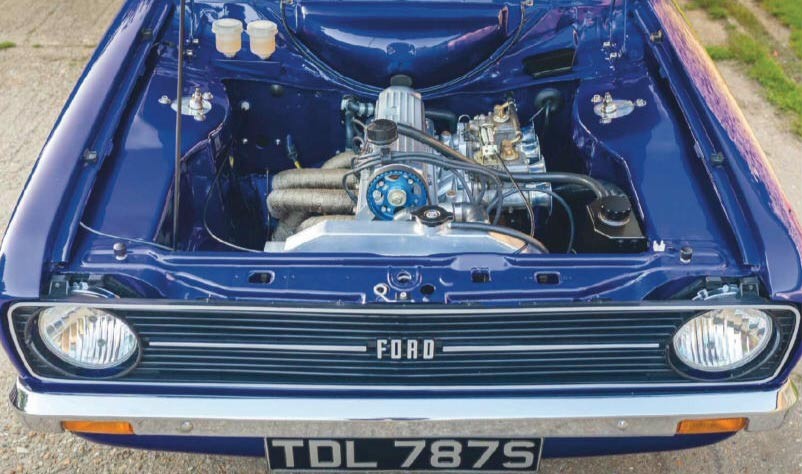 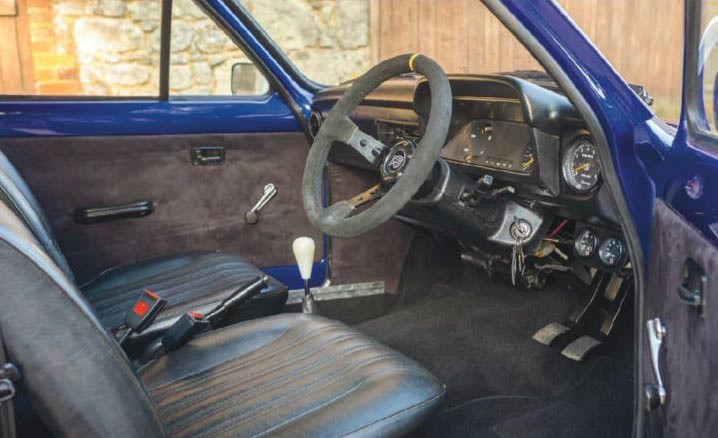 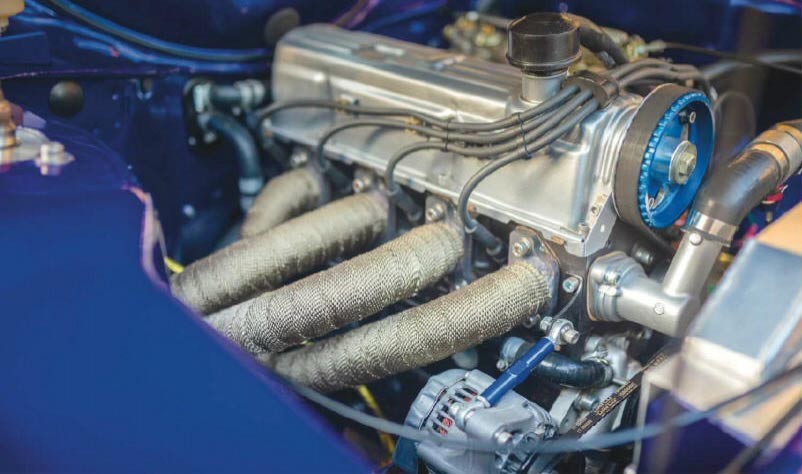