Ross Ferguson always fancied a Mini Sprint. A tired 1972 Clubman proved to be the ideal project base….

As restoration projects go, taking on the mammoth task of building a Mini Sprint from the ground up certainly isn’t for the faint hearted. Luckily for 51-year-old Ross Ferguson, by the time he’d decided to take this demanding plunge, he’d already built up more than his fair share of experience restoring Minis! 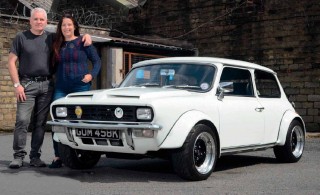 “It all began over thirty years ago, when my wife was looking for a car and fancied something a little bit different” Ross smiles, “after looking at various options like Beetles, she fell for an accident damaged beige Mini 1000 which stood out with its unusual NI number plate!” A full strip down and rebuild soon ensued, a process which taught Ross how to weld. “This car would become my wife’s daily driver, commuting between Glasgow and Stirling on a daily basis,” Ross remembers, “from there a love for everything Mini was born.”

“It’s a gentle upgrade rather than a full custom”

By the early 90s, Ross’s addiction to Minis had grown to the extent where he opened his own business, the Glasgowbased Minis With Attitude. A multitude of classic Minis would be restored and built up to customer’s specific requests throughout the 90s and unsurprisingly Ross was never short of work. “I never had time to build my own back then, but I really enjoyed creating projects for customers” Ross laughs. 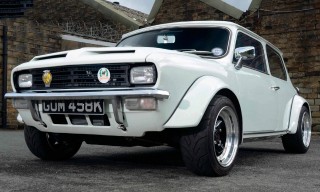 One of these many projects stood out, a Stuart & Arden Hawk (fibreglass Sprint) which Ross rebuilt some two decades ago. “I’ve always loved the Mini Sprints from the 60s and had a hankering to build a steel bodied version for myself when I had the chance,” Ross explains. It would be around ten years later when Ross finally got the time to devote to his dream project, although the Mini he used as a base came to him by complete chance. “Back in 2008 I was at work as a caravan engineer when we all got talking about jobs we’d done in the past,” Ross recalls, “I mentioned I used to run Minis with Attitude and explained some of the work entailed.

“The idea of doing a Sprint was too good to resist”

One of my colleagues then told me he had an old Mini parked up in an outbuilding, that I was welcome to have.” Chances like this don’t come often and Ross went to view what turned out to be a 1972 998cc Mini Clubman. “Myself and my wife Jo reckoned it looked ok… though it was dark at the time,” Ross laughs, “we took it anyway and arranged for it to be transported to my garage the following weekend.” 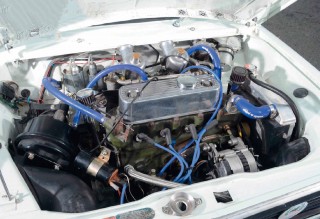 Once inspected in daylight, the horrors of the Clubman became more apparent. “the bottom 2 inches were completely rotten throughout the car,” Ross chuckles at the memory, “I knew straight away a full strip down would be necessary.” Initially, this was intended to be a straightforward and simple restoration process to get Ross’s hand back into welding, but as the to do list steadily grew, some ambitious plans were beginning to hatch. “I wanted to do something personal and the idea of doing a Sprint was too good to resist,” Ross smiles, “I’d never seen a Clubman Sprint before so I knew it would be something different.” A quick sketch or two later, Ross took a Sharpie and angle grinder to the shell and before he knew it, he was fully committed! “I had to remind myself that if it didn’t work out, it’d be no huge loss as the car had come free anyway.”

The initial cutting down of the shell would cost Ross nothing except time, but soon new panels were bought or fabricated and his commitment to this project increased. “The 2.5 inches removed from both the pillars and the body took longest to do because of all the detail such as the passenger door wing,” Ross explains, “I bought the 13 inch Revolution wheels from Huddersfield Mini Spares very early on to keep me motivated! Once you’ve committed to parts the project feels more real.”

The doors also needed cutting down to the correct size in order to achieve a perfect fit, so did the bootlid, which due to its curvaceous shape proved tricky. “I spent a long time making sure the bootlid looked like the original. I ended up using two seperate bootlids to get the inside diagonals neatly aligned into the 2.5 inch shorter panel,” Ross points out, “it took three weeks to get to a stage I was happy with!” The rear bins and inner wings also had to be reduced in size for that Sprint look too.

Aside from the modified metalwork, there was still plenty of welding to be done just like there would in any major restoration. These included full length floor panels, boot floor, back seat panel, subframe mounting panel, sills and pillars along with the front panel and slam panel which have all been replaced. “The rear valance and closing panels along with lots of sundry fittings were also replaced,” Ross tells us, “in fact, the only panels that haven’t been replaced or modified are the roof and toe board!”

Those wider 13 inch wheels would have struggled to fit under standard arches, Ross electing to use fibreglass Sportspack arches to create his desired look. Typically, these wouldn’t be a straightforward fit as they needed widening and reshaping in order to sit correctly on the modified shell. 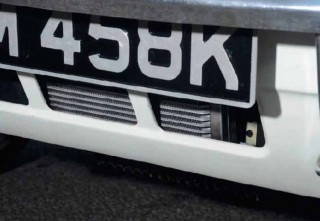 Attention then turned to the chassis in order to achieve that perfect stance. Both subframes remain standard, and alloy Superfins and adjustable radius arm brackets have been added to the rear. The suspension itself centres around Spax lowered shocks with modified suspension mounts all round, along with red dot cones and Hi-Los. Adjustable bottom arms and tie bars have also been added, while polybushes help provide a more reassuring drive. Those larger diameter wheels also provide room for bigger front brakes, something Ross has taken full advantage of with four-pot calipers with vented and grooved discs. “The engine was already in the car when I bought it,” Ross explains, “it was originally from an Austin 1300GT and needed a proper strip down and rebuild.”

A +20 thou overbore takes the A-series up to 1293cc and it now benefits from a 286 Kent cam, hi-lift rockers and twin 1.5 inch SU carbs. The standard 1300GT remote gearbox remains but Ross has also added a four cross pin diff, lightened and balanced flywheel, Hardy Spicer output shaft and rally driveshafts. 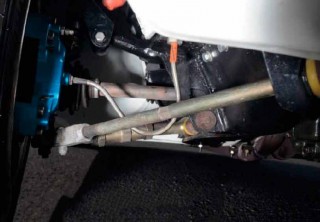 “It’s a gentle upgrade rather than full custom, but the overall package is certainly lively enough,” Ross smiles. The alloy radiator and overflow tank along with the blue silicon hoses help to brighten up the bay, while the Maniflow manifold and twin box side exit exhaust sounds the nuts too. The cut down twin fuel tanks residing in the boot are a neat touch, another example of Ross thinking things through and coming up with a clever solution.

Despite much of the bodywork already having been fabricated, Ross had still yet to tackle the bonnet, don’t forget the engine bay is 2.5 inch shallower than standard here! “I modified the bonnet to fit over the engine, but once I’d fitted the twin SU carbs it wouldn’t close over the dash pots so I made two small tear drops to give them clearance,” Ross points out. Luckily, this guy isn’t put off by these small problems that suddenly arise! And another tricky situation followed as the next task was to cut and fit the glass. “It took three windscreens before I finally got the one I was happy with,” Ross laughs, “the rear screen was also tricky to fit. Luckily, the flat side glass was a little more straightforward.” At present the door windows use Perspex, though Ross plans to swap these for glass in the near future.

The rear lights are standard MkII/III, but the front grille aperture was another area that had now been reduced in height. The standard grille itself could be cut down to size, but this left the problem of sourcing headlamps that would not only fit but look the part too. “Luckily after an age of searching I spotted these aftermarket rectangular Hella headlamps online,” Ross tells us, “after some careful measuring they were found to be the perfect size and suit the Sprint style front end too.”

Ross also carried out the respray at home in his garage. The period Arctic White colour chosen is 1970’s BMC and more commonly used on Range Rovers. Ross had already bought the Cobra classic GT seats some time ago. “We also wanted a rear seat though it was doubtful anyone could actually sit in it,” Ross explains, “the door panels and rear seat needed to be cut down to size and Jo retrimmed them to match the front seats in a diamond pattern and cord in black, she did a great job.” The remainder of the interior is also impressive. The late model six-clock dash repainted in deep blue contrasts well with the array of cream clocks and gauges. Vinyl trimmed dash pads also add to the overall effect while a stainless steering column bracket, alloy steering wheel and alloy furniture complement each other well. 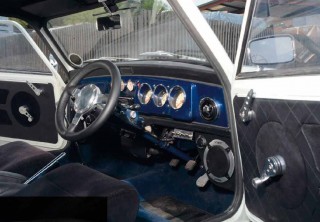 It may have taken Ross almost a decade to complete his ambitious project, but considering there aren’t any manuals available to tell you the best way to take five inches out of a Mini, he’s done an impressive job for sure. And he’s already begun his follow up project, a 1967 MkIII Wolseley Hornet, though this one is likely to remain standard. Ross did mention he’d yet to come across a Sprinted Wolseley Elf or Riley Hornet though, so watch this space!

THANKS TO: Mini Spares (York and Huddersfield) MiniSport 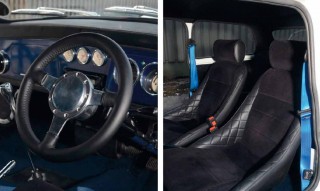 It’s not only the body which has had height removed, both the doors and boolid have been customised. Late six-clock dash has been repsprayed metallic blue. Cobra Classic GTs set the interior tone. With a total of five inches taken out of the height, this is one low Mini… Revo split rims were an early purchase. Both fuel tanks have been shortened. Ross, and wife, Jo, are enjoying the fruits of their labours.

The engine originally came from a 1300GT but has now been overbored to 1293cc and features a host of mods. Front suspension is fully adjustable.