“Despite thousands of cars passing through his hands over the years there is only one that he calls his dream car: the W108” 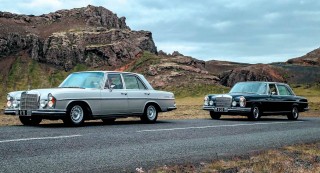 For many years, Gunnar Mar Gunnarsson has worked in Iceland’s biggest car dealership selling Jaguars, BMWs and Land Rovers to those that can afford the country’s punitive import tariffs. But despite literally thousands of cars passing through his hands over the years there is only one that he calls his dream car: the W108. For many years he assumed that his love for the classic Benz stemmed from when he was around 10 years old as he remembers his late father’s best friend popping around in his elegant W108. But those fond, formative memories weren’t the earliest. “Recently my mum came across an old photo of me when I was about three years old and in it, I am playing with a remote controlled car. And guess what? It was a W108!” 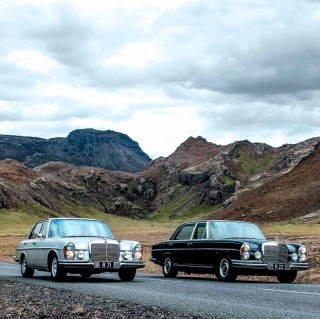 Gunnar had a 1971 280SE back in 1995 but unfortunately its previous owner had used it as a normal car. In the harsh Icelandic winters, when the roads are dosed daily with salt spelt, its eventual and inevitable death came. “I was only 25 when I bought it and because the paint was shiny I thought it was fine.” But despite trying his best to halt the spread of the dreaded rot for 10 years, it was sadly an uneven fight and in 2006 the diagnosis was deemed terminal. “I got a price for a strip down refurbishment and knew that it wasn’t financially viable,” he sighs.

Soon after he came across a well known 280SE 3.5 for sale at the local classic club, one he’d seen a couple of times a year and knew was only a summer car. He called the owner and as the price was less than what his rusted out car would have cost to repair, it seemed a good deal. With a much rarer 3.5-litre V8 under the hood it was also a significant upgrade.

The car was a 1972 example that had been brought over to Iceland in 1974 and was in almost immaculate condition, which Gunnar has maintained in his 13 years of ownership. But, initially at least, it wasn’t all plain sailing. “From lack of use, the inside of the fuel tank had rusted,” he recalls. “So even though I put fresh fuel inside the whole system got gunked up with rust particles and stuff. After just a few miles of driving it needed a full overhaul of the fuel system, from the tank, lines and the injector pump.”

Since then though, all it has needed is servicing, but only when it needs it, as the car has a rather easy life. The classic driving season in Iceland starts in May and depending on the weather lasts until September, which doesn’t include rainy days, and the longest trip Gunnar has done with it is about 60 miles. Unlike his previous car, there is no serious work that needs doing, although the rear shocks will be renewed as there is an occasional clunking sound in one of them.

But Gunnar and his friend Sveinn Thorn have a plan for a proper road trip in the next year or so, as both want to take the ferry to Denmark and then have a leisurely cruise down to the sacred Mercedes-Benz museum in Stuttgart.

Sveinn has an equally emotive story with his 1967 Mercedes-Benz 300SEL 6.3 W109, the top of the range model of the series. Like Gunnar, his love for the model goes all the way back to his childhood, as this was his uncle’s car and he remembers sitting on the back seat as a boy and being driven around by his late father whenever he borrowed it. And he clearly recalls making a wish that one day this car would be his.

Unfortunately, it didn’t seem as though that wish would come true though. With the sophisticated air-suspension the car could be lifted up to give a handy amount of ground clearance, quite useful for driving off-road in the remote highlands and fording rivers and it was during one of these crossings that Sveinn’s uncle hit a rock that cracked the sump. He didn’t notice the loss of oil until the camshafts had already been starved and the repair bill was going to be so high that even though the car was just a few years old he just gave it away to a friend. And for nearly 30 years that was the end of the story.

On a Friday, back in the early 2000s, he spoke to his uncle about the old car he used to own, the first time either of them had mentioned it in decades. On the Saturday, his VW broke and by the Monday, he needed to go to the next town for a new part. In the back of the garage was a Mercedes under a dust cover and without asking Sveinn lifted it to see what was underneath.

Partially dissembled and being used as a storage shed was his uncle’s long lost W109. “There has only even been one 6.3 in Iceland so I knew straight away that it was my uncle’s car,” he says. At first, he assumed it was a wreck, far beyond his mechanical skills to take on, but the seemingly advanced state of disrepair was due to it having a full repaint and not being put back together properly. “I hadn’t thought about this car for many years, literally decades,” Sveinn remembers. “Yet three days after I talked about it there it was. And I remembered the promise I made to myself as a boy on the back seat all those years ago that one day it would be mine.”

A deal was done for it right there and then and it took a week to pull everything out of it and sort through what pieces were in which boxes, a task made much harder as it contained spares from a donor car. Working out what parts were from the air vacuum central locking system and which from the electric windows took time, but slowly it began to go back together again. “It was like doing a complicated jigsaw puzzle with no picture but added pieces from another puzzle mixed in,” he remembers from the time.

During the rebuild process, Sveinn also came across a couple of heart warming things. An ashtray full of cigarette butts is probably not the most notable discovery for most people but as the car had never been driven since his uncle gave it away they were most probably his. “I kept them,” Sveinn says. “It’s like having a little bit of my uncle’s spirit in the car.” And in the trim of the back seats he found some ring caps. “I remember playing with plastic guns when I was a kid, so that was something else that brought back some great memories.”

Although the engine damage from the lack of oil had been fixed it had been stored for all those years and so after nearly three decades of dormancy it needed a bit of work to get going again. The yellow gunk that blew out of the air intake was 30-year old rotted petrol and so the fuel tank needed repairing as it was heavily corroded on the inside, much like Gunnar’s car. But with a full fluid change and a new battery the car started and once again the sound of the sweet V8 he loved as a child filled his ears. “It was quite a nice moment,” he says with typical Icelandic understatement.

“The last thing I did was to install a radio. I found two classic Becker Europa radios in the boot and decided to try one of them. When I turned it on and started tuning it on the AM band, the first station I found was a German news broadcast. I thought to myself, of course the car was speaking in its native language when I woke it up.”

This was back in 2002 and fixing the air suspension compressors by himself along with a new pump is all he’s had to do to it since then. Now he enjoys the car on Icelandic classic car runs and taking the family up to the national park near the city. He has two daughters, and although they love the car as the classic it is, they aren’t exactly petrolheads, so there’s not much talk of passing this heirloom on for the next generation.

The suburbs of Reykjavik are much like any other European city, but it doesn’t take long for Iceland’s famously epic wilderness to start. On good tarmac, cruising at 60mph Gunnar’s 280SE is an absolute pleasure to drive. With the low growl of the lazy V8, and the luxury feel from the suspension, even at nearly half a century old, the ride is comparable to a modern car. And to the elegant chrome and walnut trim in the dashboard, nothing modern compares.

Maybe it’s the colour, but the dark blue (dunkelblau) of Sveinn’s 300SEL makes it look a little more sombre and dated than Gunnar’s, but it is his actual childhood car, so maybe he took the corners a little easier. But the M100 engine gives a top speed of 135mph, theoretically, as in Iceland there is no where you could get up to a such speed.

We stopped at a little picnic spot, swatted away the clouds of midges, and popped up the path a few metres to where Brienne of Tarth and the Hound fought to the death in Season 4 of Game of Thrones. Looking at the scene again on Youtube later it didn’t look so epic knowing that there was a car park right next to it. Gunnar was actually a part of that scene, as he was a minibus driver ferrying the cast and crew here from their hotel in the city. Heading back to the city next to the hot water pipe from the geothermal station to the hot taps of Reykjavik, sunroof and windows open, the low evening sun glinting off all the chrome it was no wonder that these reverential old Mercedes mean so much to the proud owners.

These are the period photographs… …showing Sveinn’s family with the car. 3.5-litre V8 power offered a good step up. Later wheels give the car a different look.   Inside is very original and it’s all in great condition. These roads offer plenty of scenic drives. The cars can often be found driving together. This example has been subject to a restoration. The big 6.3-litre V8 has also been rebuilt. Leather seats are the original items. Due to some serious hours, the car looks new. Travelling together paints a perfect picture. Gunnar’s 3.5-litre V8 is a cherished car. Sveinn has known this 6.3 since it was new. Both owners enjoy their cars on scenic roads.

All figures according to Mercedes-Benz