When you bring to mind the various cars you’ve owned, there’s bound to be a standout ride which holds a special place in your affections. Contrary to what many nonpetrolheads might think, sentiment is likely to trump specification. This is certainly evident when speaking with Mercedes die-hard, John Roberts, a man who can count a high number of technically brilliant and powerful cars on his motoring CV, but favours his 99bhp W110 above every vehicle he’s bought to date. It doesn’t take long to discover why the midsize Mercedes means so much to him. “My late father bought the car new when he was stationed in Singapore serving with the RAF in 1967,” he tells us. “He intended to buy a Volvo, but the salesman in the dealership he visited was less than attentive.

Frustrated at not being taken seriously, Dad wandered across the road to Cycle and Carriage, a company engaged in the retail, distribution, provision and aftersales service of Mercedes cars in Southeast Asia. He took an instant liking to the W110 on display in the company’s showroom and placed an order.”

The W110 was launched in the early 1960s as a four-cylinder variant of the six-cylinder W111. The range’s Heckflosse rear end was designed to follow a design trend favoured by car buyers in Mercedes’ growing North American sales market, although function was offered in addition to form; given the catchy designation, Peilstege, the short fins were advertised as being useful for judging how much distance is available when reversing into tight parking spaces. Not that these features have helped John. “Four months ago, I bent the rear bumper when backing my W110 into a lamppost,” he sighs. “The part is split into two sections joined by a collar in the centre. It would have been possible to repair the affected area, but it worked out cheaper for me to import a new genuine bumper being offered for sale by an enthusiast in Germany.” 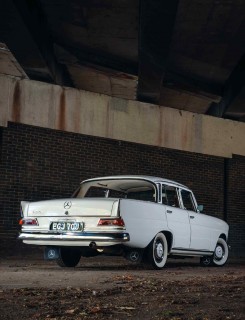 The car he’s in possession of is a petrol-powered, digit-tastic W110.010 200, meaning it’s a facelift W110 loaded with a 1988cc twin-carb inline-four. Only in production for three years, the model is a rare sight in Britain. “Dad shipped the car from Singapore to England when he returned to the UK in 1970,” explains John. “By the mid-1980s, it was a tired old Merc, but one of my cousins recognised its retro charm as being exactly what she wanted for her wedding car.” Consequently, John’s dad replaced weathered grey paintwork with a lick of pure white, cleaned the burgundy upholstery – including the rare front bench – and restored the car’s brightwork in time for the big day in the summer of 1986.

By 1987, the well-travelled four-door was hidden beneath a tarpaulin outside the Roberts residence in Letchworth Garden City, where it remained untouched for six years. “As a kid, I saw the car as nothing more than a lump in the yard!” laughs John. “I remember kicking a football against the bodywork. In fairness, it was a wreck. Dad even considered scrapping the car until my mum gathered a load of cleaning products and brought the interior up to what seemed like a factory fresh finish. She told him there was no way he was allowed to give up on this classic Mercedes. I’m glad she intervened!”

Clearly an industrious chap, John’s dad erected a double garage with an integrated spray booth. Roberts Jr was now in his teens and keen to get involved in what he saw as an exciting automotive project. “I helped strip the car alongside a beige donor W110 Dad bought for £600 as a source for spares,” he recalls. “Most of the work he carried out was cosmetic, including fresh paint and replacing chrome where necessary, although I was surprised to come home from school one day to find him in the middle of converting the car from manual transmission to automatic using the gearbox out of the donor.” The switch required the beige benefactor’s drivetrain ancillaries and propshaft, but even with all the required parts available, the conversion didn’t prove completely successful. “Shifting was clunky, which is why dad swapped back to the manual ‘box a couple of years later. I still have the automatic unit, though. I’m tempted to have it rebuilt and installed at a later date,” muses John. 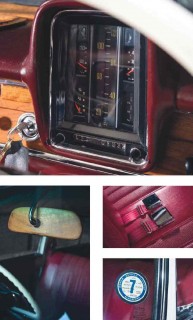 Occasional outings to classic car shows (“that’s where my interest in vintage vehicles really took hold”) followed the white wonder’s return to the road until John’s father passed away in 2005. A short while later, the young Mercedes fan took it upon himself to restore the car to the standard you see displayed on the pages before you. “The engine wasn’t running right,” he reveals. “I asked a skilled mechanic to take a look. He reported back to me with news the bottom end was in desperate need of attention, a condition proved by the discovery of metal floating around the sump. Subsequently, the block was completely stripped and restored, as was the manual gearbox. For the first time, I was able to experience how the car must have felt when it was new,” he says, referring to the faultless running of the two-litre M121 engine. “This W110 is never going to win a drag contest, but it’s now more than happy to cruise along at eighty!”

The brakes, suspension and exhaust were replaced in advance of another round of cosmetic updates. Chris Bray at classic car specialist, Finishline UK, was given the job of repairing distressed door bottoms and other exterior metal before the application of brilliant white the car wears today.

Leatherwork is original, yet there are interior modifications those with a keen eye may have noticed. The rear-view mirror, for instance, is a wooden part handmade by John’s dad many moons ago. He also added a mix of wood and chrome details to the dashboard. A new colour-coded steering wheel sourced from Poland replaces the “crazed and cracked” original part, a purchase demonstrating how British W110 owners are more likely to find spares in mainland Europe than in the UK, even if local autojumbles occasionally throw up the most unlikely of items. “I was rummaging through a box of old Mercedes parts being offered by a trader at a car show held at Knebworth House, when I spotted a brand new W110 swan neck door mirror. I paid less than four quid!” beams John, pleased at securing a bargain that’d make David Dickinson proud. 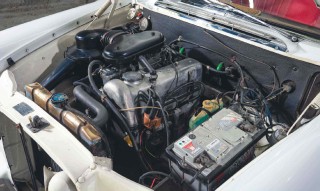 At fifty-two years old, this splendid saloon is getting more use today than it has experienced in decades, largely due to the fact John has resurrected its role as a wedding car in order to pay for ongoing mechanical maintenance. When he’s not donning a sharp suit and wrapping ribbons around his four-wheeled friend’s front end, this 1960s smasher can be seen on display at shows throughout the summer season. “Despite its advancing years, it’s a car capable of surprising a lot of what’s on the road today,” he reflects. “I’m considering adding better soundproofing to the cabin to make long journeys more pleasurable, and I’ll probably get busy with a detailing session in the engine bay when the warm weather returns, but that’s about all my Merc is in need of,” he smiles, proud of a restoration well done.

A low number of W110s were sold in the UK before being discontinued in 1968. In contrast, the model was a big hit for Mercedes elsewhere, with more than half a million units built for worldwide distribution. There’s no shortage of spares to be found at reasonable cost outside Blighty, although your biggest challenge is going to be finding a rustfree right-hand drive car to fit them to. Don’t let hard work dissuade you from looking, though. Now is the time to buy, with prices of respectable W110s currently matching what your next-door neighbour paid for his second-hand Ford Focus. Just like John and his father before him, exercise a little patience, and you’ll be rewarded with a stylish saloon which may end up being the highlight of your car history. 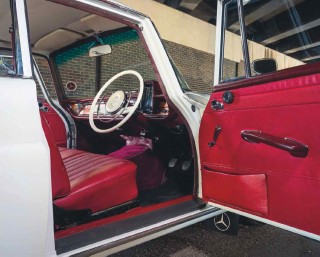 The W110 was the entry-level midsize Mercedes in the 1960s, originally offered with a 1.9-litre petrol or two-litre diesel inline four. The model first made its appearance in 1961 before being given a facelift in 1965, when the displacement of offered engines was increased. Production lasted until 1968, making John’s two-litre petrol W110 a late example of the fintailed four-door.

The W110 and its six-cylinder sibling, the W111, were the first Mercedes production cars extensively tested for crash protection, with crumple zones introduced to absorb kinetic energy on impact. The jury’s out on whether John’s altercation with a lamppost was a test! 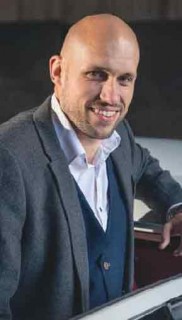 First Mercedes This one

Worst thing about your W110 200 The required engine and gearbox work!

Above 99bhp two-litre petrol engine has been rebuilt following the discovery of damaging debris floating around the sump. Above It’s amazing to think you can buy this much retro chic for less than the cost of your mate’s grocery getter Left Burgundy trim looks super-fresh despite being more than half a century old.