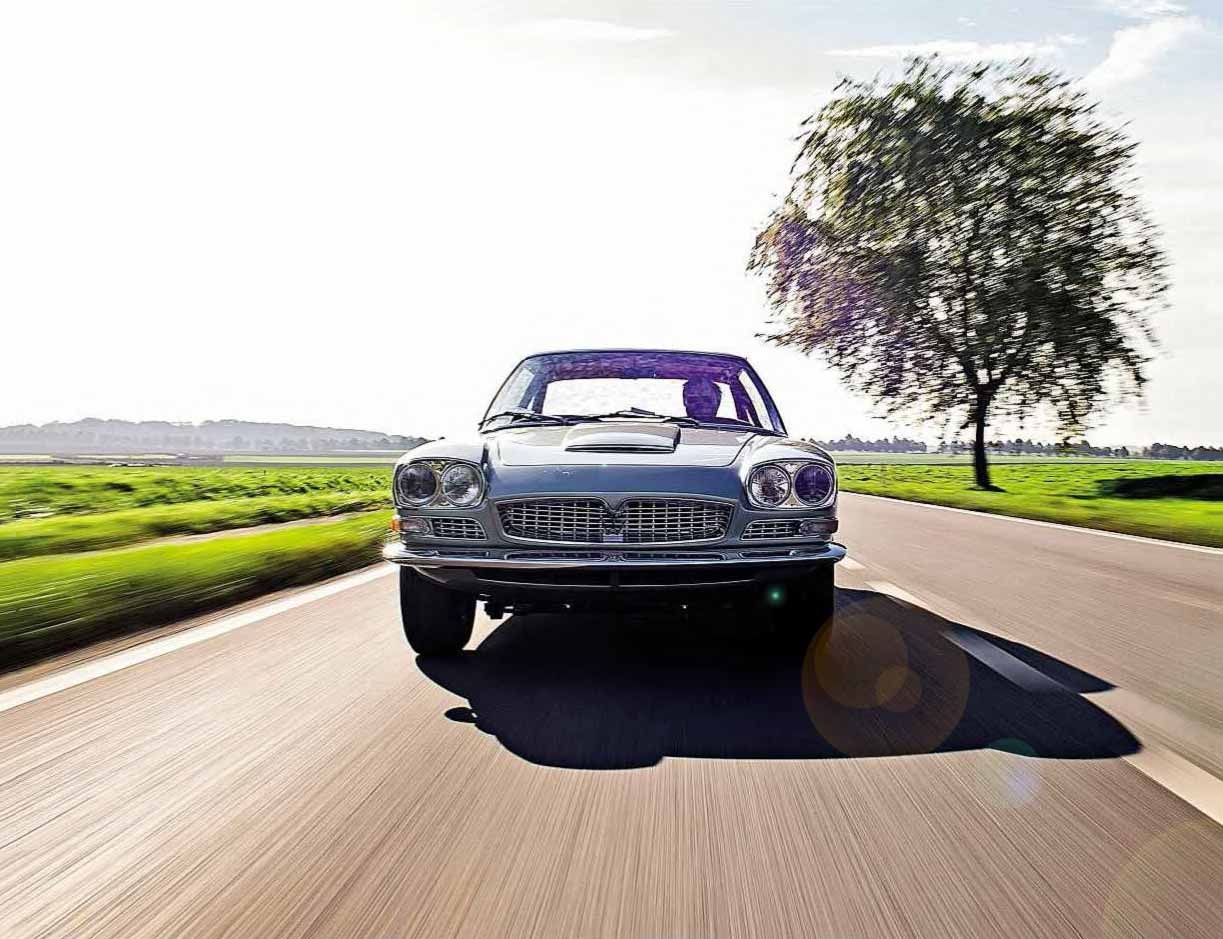 Life story of a unique show car, now restored. Mexico’s standby While the Maserati Mexico was designed by Vignale, this unique version was styled by Pietro Frua in the manner of his Aga Khan 5000GT. This is its life story. Words Marc Sonnery. Photography Dirk de Jager.

During the 1960s, Maserati’s final decade under the auspices of the Orsi family, such classics as the Ghibli supercar and Quattroporte saloon were launched – as well as the Mexico, an agile four-seater aimed at the sporting gentleman driver. It was introduced at the 1965 Turin motor show, in conservative Vignale clothing by Virginio Vairo, which clad the archetypal Maserati tubular chassis, live rear axle, a 4.7-litre V8 (from 1969 a cheaper 4.2 as well) and Girling disc brakes at all four comers.

So far, so familiar. Yet two were also bodied – uniquely – by Frua, one a 4.2-litre car with semi-faired-in headlights reminiscent of the coachbuilder’s Mistral (in fact, a third wore a modified Mistral body). The other is the car in these pictures, chassis number 112.1.103, which retains the Mexico’s drooping nose but with a lower front bumper and the classic four-headlamp grille. There were greater, though subtle, differences elsewhere.

Of course, Frua was no stranger to Maserati. In 1950 he had designed several A6G 2000 spiders, coupes and two series of A6G 54 in spider and berlinetta versions as well. His piece de resistance for the Trident – and the car that set the pattern for his future Maserati renderings, including the Quattroporte – was his version of the coachbuilt 5000GT. Three were created, though only the first two had 5000GT engines, the second of which was the Aga Khan’s car, given later to one of his wives, the actress Rita Hayworth. While that was obviously the peak of his collaboration, perhaps Frua’s best-known Maserati design was the Mistral of 1965.

The car in these pictures is the more mature and successful of Frua’s two Mexicos, and fitted with the 4.7-litre V8, contrary to reports mistakenly labelling it as a 4.2. It was sent to Frua for bodywork before the engine was even in running condition, according to the factory’s long-time archivist Ermanno Cozza, such was the haste in preparing it for the 1968 Geneva show deadline, where it had its world premiere on the Frua stand.

Its design turned out to be more harmonious than the standard car, retaining the general Mexico lines, yet, while the latter is more rounded and offers a hint of Gordon Keeble, the Frua is more sharply defined and in many ways recalls the Quattroporte 1 and the Aga Khan 5000GT – of which it is the natural successor.

Could this actually have been his best work? Well, Pietro Frua himself left no comments about his favourite designs and, according to his biographer Giuliano Silli, he worked alone so there is no one to turn to for an official opinion. I Ie died in 1983.

The Mexico Frua’s first paint shade was a watery green, to which it has now been returned, while the interior was trimmed in Bordeaux leather. After its Geneva debut, it remained with Frua (still, so it’s believed, as a non-runner) until December 1969, when it was delivered to the Maserati factory. The reason for the delay is difficult to ascertain but, according to Fabio Collina, Cozza’s successor at Maserati Classiche: ‘I found a note written years ago by Ermanno, where it seems that the car was initially manufactured [September 1967] incomplete, without part of the mechanics, to be shown as a static model at the Geneva motor show on the Frua stand. Later the car came back to the factory and was completed. In March 1970 the car was finally delivered to Auto Paris [the Barcelona-based Spanish importer). We can suppose that during the completion of the car at the factory Auto Paris requested the change of colour.’

After final preparation at the factory (where it was resprayed blue), the Frua Mexico was sold on 24 March 1970, two years after its Geneva presentation, to Auto Paris, and on 1 April it was sent to Barcelona by sea freight. While period photos show it in the factory courtyard with Borrani wire wheels, it was sold with starburst Elektron wheels, and left the factory with power steering, air conditioning and radio.

Javier Pujol, the owner of Auto Paris, was an eager promoter of the marque and always had an impressive display at the Barcelona show. Factory delivery documents state that it was to be sent directly to that year’s show on 18 April, yet there is no evidence that it was ever there. The car was sold locally, then traded back in 1974 to Auto Paris in exchange for one of the first Quattroporte Hs – an ironic twist, as will become clear further on. Then, under the custodianship of three further Spanish owners (repainted silver and fitted with Quattroporte 1 tail-lights), it was acquired in 1980 by a Maserati connoisseur from Barcelona. With him, the Mexico Frua earned a trophy on a touring rally at Montjuic Park, was driven to Monaco for an International Maserati club gathering, and repainted gunmetal grey. And then it lived in seclusion on his country estate in north-eastern Spain for more than three decades.

Typically for a car sold south of the Pyrenees in years gone by, the Mexico Frua remained very much under the radar and, when its longtime owner contacted the factory more recently, it came as a total surprise to Ermanno Cozza, who had thought it long gone. ‘I low can you have this car?’ he’d exclaimed.

The owner finally sold the car after 33 years. I stumbled upon it by chance while visiting him to buy another Maserati for a client: a rare Quattroporte II (fitted with the same V6 as the Citroen SM), quite possibly the same one the Mexico Frua had once been traded for.

Spotting an intriguing and grand shape under a cover in his vast warehouse, I asked what it might be. He was only too happy to uncover it, as it was his favourite car in his considerable collection. My QPII customer bought that car but was not prepared to take the Mexico Frua too, which was in a different price league, so I offered it to a Belgian client. The car ran very strongly, but there was rust in the sills to take care of and it was no longer registered, so the test drive took place on the Spanish estate, where I was most impressed with the power during a lurid slide.

Following protracted negotiations, the Mexico Frua was trucked to Belgium for restoration, where the bodywork was handled by the exacting Philippe Vilain. line sills were rotten, the bottoms of the doors needed attention, and a colony of termites had to be evicted from between the double floors, yet his greatest challenge was to restore panels from scratch without any reference points. Several layers of paint were found, including the blue celeste delivery shade as mentioned on factory papers, which had been sprayed over the original pale green.

Mechanically the car was in excellent condition; Officina, near Brussels, carried out some tuning work but there was no need to rebuild the engine, gearbox or differential. The interior was well-preserved; only the stained leather of the rear shelf had to be replaced.

The restored Mexico Frua was unanimously well received, from its introduction at Salon Prive in September 2014 to its display three days later amidst a star-studded assembly of Maseratis at the Chantilly Arts et Elegance and then the Maserati 100th Anniversary event in Turin, where it won Best in Show. It also won an award at the Belgian Zoute concours, just three days before my drive outside Brussels.

Tine watery green colour suits the styling and the Modenese gran turismo ethos perfectly. It has much greater presence than a standard Mexico, thanks to its resemblance to the Quattroporte, and the red interior lends tasteful gravitas. line ‘P.Frua Torino’ chrome insignia is handsome; even the engine bay manages to be stylish, with black gloss cam-covers and black quilted heat-shielding on the firewall. And while the original starburst rims are still with the car, it’s running on a set of Borrani wires like those it wore at the factory before delivery.

Getting away is as easy as can be: light pedals, a precise ZF gearshift and power steering make progress as effortless as it is seamless. Ride quality is ideal, being comfortable yet with limited roll, and it feels superbly planted and poised, which is something of a surprise as one would expect such a large car to be heavy but, at only 1600kg – significantly less than a standard Mexico – the Frua really impresses. It steers much more sharply than a standard car, too.

The V8’s torque is truly mighty, with acceleration that feels little short of a Khamsin’s. With your foot hard down, the engine’s deep rumble morphs into a turbine howl, the sound of a beast eager for supremacy. Good brakes (Girling vented discs) complete the package, though they would no doubt protest after several circuit laps. After a long stint on roads that vary from cobblestones to twisting lanes and motorway, the lasting impression is of perfect homogeneity between regal allure, surprising performance and effortless ease.

As one of the very last coachbuilt cars to leave Viale Giro Menotti, and as the brilliantly competent – and fast – gentleman’s express it remains, the Mexico Frua stands out as the zenith of Maserati’s road-car output, the quintessential product of a century-long history.

THANKS TO the owner, to Giuliano Silli, the Frua family archivist Roberto Rigoli, Stefan Dierkes and Philippe Murari.

‘ON THE TEST DRIVE, I WAS MOST IMPRESSED WITH THE POWER DURING A LURID SLIDE’