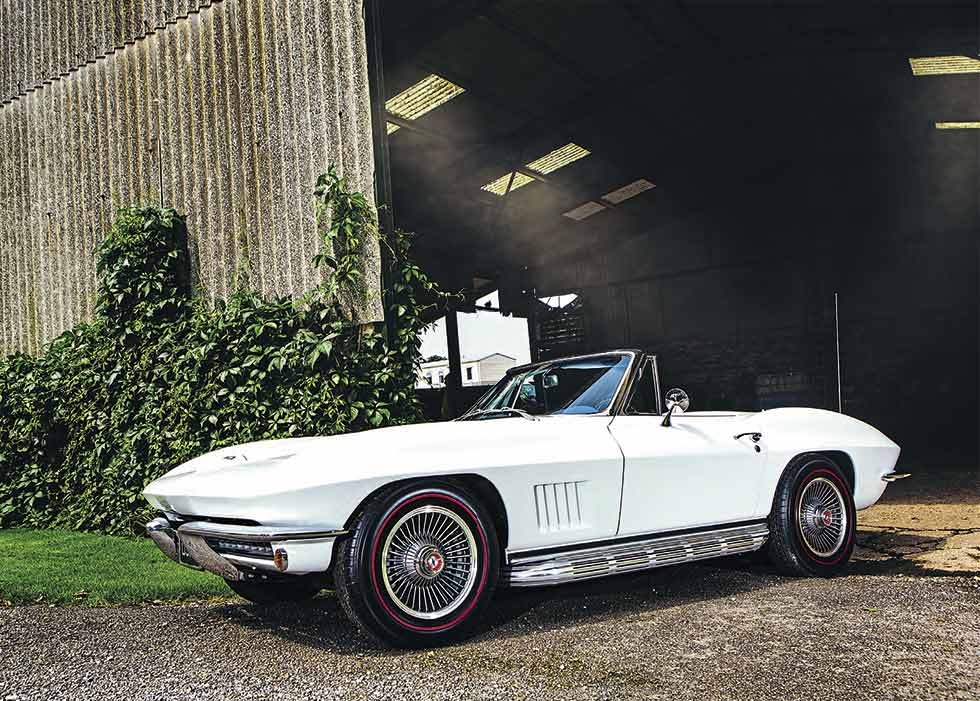 1967 Corvette Hot Property. The specification of this gorgeous ’1967 Sting Ray is hot enough without its exciting back story – it was bought at a police auction by the officer who put its previous gangster owner behind bars! Words: Nigel Boothman. Photography: Gary Chapman.

It looks so pure and innocent, doesn’t it? Well, the car itself is innocent enough, but it had at least one owner back in the US who was certainly not on the side of the angels. This Corvette is now in the UK, owned by Adrian Dromey, who tells us the tale.

“The car belonged to an LAPD detective when I heard about it. The story was that this gentleman had been pursuing a major drug dealer in Los Angeles for four or five years before he was finally able to make the arrest, after which the dealer went down for seven life sentences. When he was convicted, his property was seized as proceeds of crime and later auctioned – at which point the detective won the bidding on the Corvette.”

He sounds like our kind of copper – gets the man, pays extra for the car. It would be interesting to know whether the LAPD officer wanted the car to commemorate a hard-fought victory, or whether he really knew his Corvettes and spotted it as something special. Because it is rather special, you see…

“It’s got the 327/350 engine,” says Adrian. “That’s the Hi-Performance L79 option which gave you a factory high-lift cam and an aluminium intake manifold.” Adrian has bought and sold Corvettes for a living since 1979 and reckons he is closer to his 2000th Corvette than his 1000th, but this one is not sale stock. It’s a keeper and for any car to stand out as much as that in a life full of Corvettes, it must have a lot going for it.

“I first heard about it – and its unusual story – through a contact in San Diego,” says Adrian. “The LAPD detective had acquired it at the auction around 2006 and after a few years of ownership was looking to sell. This was in 2012. When I heard about the car’s specification and condition, I bought it and imported it to the UK.”

The 1967 Corvette Sting Ray was the last of the C2 models, and it happens to be Adrian’s favourite year. The most obvious external distinction is the side louvre – it was either a pair of scoops or three parallel slots on previous years, then for ’1967 the Sting Ray was given five slatted vents behind each front wheel. Elsewhere, the ’67 is just a little cleaner and sleeker than earlier C2s and has a much easier-to- use parking brake in the centre console rather than under the dash.

Readers of Car and Driver voted the ’1967 Corvette their favourite car of the year back then, though to be exact they settled on the big-block 427-engined Sting Ray. The big-block ’Vettes have a cult following, of course, and in 1967 the potential for leaving absolutely everyone in your dust was considerable: if you could afford $437 extra, you could order an L-71 427 V8 with 435hp from triple carburettors. Keep going another $400 to L-88 spec (as only 20 people did) and you got aluminium heads and other pieces that effectively handed you a race engine needing 103-octane gas and a whole bottle of brave pills.

But as a street car? Forget it. For that you’re far better with a high-winding, lusty small-block. Even the base engine gave you a four-barrel carb and 300hp in 1967, but the hike up to 350hp made it a flying machine. Depending on your choice of back axle and gearbox – there were close-ratio and wide-ratio Muncie four-speeds – you’d hit 60mph from rest in between 5.8 and 6.2 seconds, with a top speed between 135mph and 145mph. And without a big-block in the nose, it would even go round corners.

Lest we forget, the Corvette C2 was one of the most sophisticated cars around when it was new. At launch in 1963 it was one of only two American cars with all-independent suspension, the other one being a different Chevy – the rear-engined Corvair. Both coupe and convertible Sting Ray bodies were evaluated in Caltech’s wind tunnel and in 1965 the Sting Ray became the first American car available with four-wheel disc brakes.

A shorter wheelbase than the C1 Corvette helped adjust weight distribution rearwards, and together with faster steering ratios (power assisted, if you liked, and so equipped on this car) and the much-improved roadholding from the independent rear, the Sting Ray was a genuine competitor for any sports car in the world. When GM’s unofficial race programme turned up at Nassau Speed Week in 1963 with three Sting Ray Grand Sports, they blew the Cobras into the weeds. And the Ferraris too.

The high-ups at General Motors closed down this suddenly rather public success soon after, which led Carroll Shelby to observe years later what a stroke of luck it was for him and his Cobras, saying they wouldn’t have had nearly the success they did if the Corvettes had been allowed to stay out and play. But the message got through to the public, anyway – that Car and Driver article from 1967 states that automotive magazines were putting an extra 30,000 sales on any issue that featured a Sting Ray on the cover. Are you reading this, Mr Editor?

So after five model years, the Corvette Sting Ray was an even better car than it was to start with. First pick your favourite year, then choose your ideal specification, then have the guts and the funding to say ‘yes’ when someone offers you the right car.

Adrian Dromey managed all of the above and found himself with a very nice but not-quite-perfect ’1967 convertible full of original features.

“I’m a numbers-matching obsessive,” says Adrian. “I don’t just mean that a car has to have its original engine, I mean researching the volumes of information held by the likes of the National Corvette Restorers’ Society and checking the codes you should find on every other component. Even things like alternators, radiators and carburettors were date stamped, and everything was right for this car. That means I had to take extra care during the restoration.”

Yes, although the car had been restored once in the US, it needed freshening by the time Adrian saw it, and he embarked on another body-off restoration that took three years.

“The car was stripped, painted and retrimmed in the Code 972 – that’s Ermine White with Code 450 Bright Blue and White interior trim. We went right through the suspension and running gear, renewing springs, dampers, brakes, steering joints and so on, and the same for the engine bay – new hoses, belts and gaskets, but with larger items like the radiator and alternator rebuilt so they could go back on. The car didn’t really need any mechanical work, but the engine was stripped out and rebuilt with the correct finish. I sent the dashboard gauges to America to be refurbished, and the radio went away to be rebuilt too. It all works perfectly now!”

Adrian has forgotten more about Corvettes than most of us will ever know, but he doesn’t think the DIY restoration of a car like this should be seen as daunting.

“If you possibly can, then restore it yourself. You’ll be in control of it, and even if you have to farm some bits out, try not to hand the whole car over to someone else and let them do everything. If you really have to, make sure you stay on top of the situation.”

The Corvette’s superb club support and parts availability, both here and in the US, make it one of the easier American classics to own, but even Adrian is happy to admit he turned to professional assistance for some aspects of the job. “Paul Allen of Lincolnshire Corvettes is excellent – he helped during final tuning and suspension alignment.”

All of which left Adrian with the Corvette he’d always wanted. So how does it drive? Adrian is a little hesitant here, pointing out that you don’t spend all that time and money building a car to show standard and then hooning around like a boy racer.

“It just goes to shows, to be honest, but it’s still a quick car. I have found that out! It has some great features – those factory side pipes sound terrific and the telescopic steering column is very welcome for me, as I’m 6ft 6in and it lets me move the wheel further from the dash to give my left leg some knee-room on the clutch pedal. Power steering and power brakes are very welcome too.”

It looks so right with red-line tyres and retains its good looks with the neat black roof up. The side pipes seem to add girth and muscle to an otherwise sleek shape, and what can we say about that USA 9 plate? It just adds to the jealousy we’re feeling for the whole car. Adrian has a nice observation about owning a spotless ’1967 Sting Ray L-79, so we’ll leave the last word to him: “You go to bed smiling if you’ve got one of these in your garage.”

“YOU GO TO BED SMILING IF YOU’VE GOT ONE OF THESE IN YOUR GARAGE.”

Small-block handles better than the big-block cars. Blue and white combo a refreshing change from the usual red and black. Close-ratio and wide-ratio Muncie four-speeds were available. 327/350 engine included high-lift cam and an aluminium intake manifold. Now, all we need is a long, hot summer… Refurbed gauges. Owner Adrian’s wife Hazel enjoys the ‘Vette as much as her husband.