Its often said today’s 3 Series can trace its lineage back to the ‘02 family of the late 1960s, but it’s perhaps forgotten that the 5 Series can look back to an elegant but even older and less well-remembered member of that clan. In the late ‘50s, BMW was hemorrhaging cash at an alarming rate. The range was limited with Isetta bubble cars at the one end, while at the top were the rather bloated and outdated Baroque Angels. The microcar market was dying as smaller four-wheeled machinery became much better and cheaper while there still wasn’t much call for outmoded luxury cars and BMW didn’t really have anything in between. 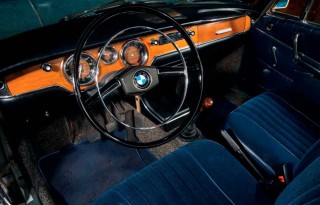 Everything changed in 1960 when Herbert and Harald Quandt bought into the firm and project Neue Klasse was started. Quandt had poached a team of talented engineers from recently closed rival Borgward to work with BMW’s existing staff so the totally new 1500 was able to be revealed barely two years later at the Frankfurt Motorshow in 1961.

The 1500, and soon after 1600, 1800 and 2000, as Alex von Faulkenhausen’s new M10 four-cylinder engine was enlarged and enhanced, was an instant hit. It appealed to the new class of Aufsteigers – Germany’s social climbers who had money and wanted to stand out, and this range of sporty saloons quickly gained the right reputation. The body design was fresh and modern, with clean, unfussy details. At first glance it looks like a simple three box saloon but look closely and there is plenty to interest the eye, including the first use of BMW’s trademark ‘Hofmeister Kink’ on the C post, named for chief designer Wilhelm Hofmeister.

The range also quickly became known for its excellent handling, a trait common to BMWs to this day, and found buyers who were looking for a more sporting drive. In 1965 BMW took the range further upmarket with the 2000 giving buyers wood trim and face-lifted bodywork on a car that looked at home in the director’s car park. 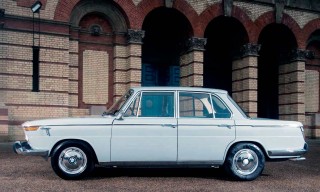 New rectangular headlamps and horizontal tail lights replaced the familiar smaller round front and square rear lights and giving the car a larger and sleeker appearance. Under the skin the rear suspension was slightly reworked for a more comfortable ride and the 2000 received the 1990cc version of the M10, first seen in 1965 in the 2000 CS Coupé. Output had risen from 80hp in the original 1500, here fitted with a single Solex carburettor it made 100hp and 116 lb ft of torque, giving a top speed of 104mph and a 0-60mph time of 11.7 seconds, figures that matched or bettered 2.0-litre saloon rivals from across Europe, those figures perhaps influencing some of the 22,019 buyers in 1967.

Although the exact details of this car’s first owner are lost, there are enough clues to suggest that May Day 1967 was a good day for the mayor of the Swiss canton of Aargau as he took delivery of his new Bristol Grey BMW 2000, complete with flag masts on the front wings. It’s easy to imagine the dignified automobile taking its place outside political engagements and civic events, and marks in the chrome of the roof rails suggest a ski-rack for weekends of outdoor adventure in the snowy mountain region.

The car didn’t stray too far from home only moving to neighbouring Hagglingen in 1995 where it stayed until 2008 before appearing for sale with a Belgian automobilia auction house who was selling it on behalf of a German supercar dealer who didn’t know what to do with it. 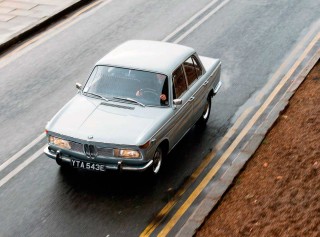 Current owner Lee Callaghan and his wife Anita were coming to the end of a four-year spell working in Singapore and were getting ready to return to London. Having always lived with classic cars – his first car was an Austin Healey, hers a Riley Kestrel – wanted a large safe family car so began hunting for something along the lines of an E9 Coupé or an E3 Saloon but the online advert for the 2000 caught Lee’s eye, but being in the Far East there was no way of inspecting it.

Anyone who runs old cars needs a mechanic they can trust, and having owned a Porsche 356 for many years Lee has been lucky enough to meet Terry Humphries through his Porsche garage and Terry had inspected cars for Lee in the past. The 356 now stays with Anita’s family in Italy and once a year Lee takes Terry out to service and check the Porsche over, so when a trained and trustworthy set of eyes was needed to check the BMW over, it was only natural that Terry got the call and a plane ticket was hastily booked.

Terry was flown to Frankfurt and driven by the seller to a garage on Daimlerstrasse in Ladenburg, the home of Mercedes Benz. The BMW was waiting on a ramp where he could have a good look around before taking a half hour test drive to an Italian restaurant on the way back to the airport. Back home by mid-afternoon Terry delivered his verdict “I loved it!” he reported back. “I’d not seen a BMW of that age in such good condition, really it was just dusty.”

The car came home to the UK in 2011 but wasn’t brought out of storage until December 2013, and even then wasn’t pressed into service straight away as after standing for a long time the 2000 needed some recommissioning. Terry had thought the car to be solid, so when it went for painting no nasty surprises were expected and thankfully none were found, a testament to the quality of BMW’s build and the steel used and a relief that perhaps the Swiss didn’t salt their roads in the late sixties! Lee was hugely impressed with the period correct cellulose paint done by painter David Graves. He didn’t want it to look over-restored in modern two-pack paint, but to have a more original-looking finish.

Rather than send his wife and kids off into London traffic in an untried classic, Lee left the car with Terry for a year while he worked through the various niggles. A set of the correct 165HR14 Pirelli Cinturato tyres were sourced from Longstone Tyres so that the ride and handling would be as it was when new and Terry set about servicing the car and replacing aged and perished rubbers and flushing old fluids.

Expecting the failure of old components many items were changed before they went wrong, some others as they failed. Terry was working 60 miles from home so started occasionally using the BMW for his commute, racking up 1000 miles of shake down before handing over the keys. In that time the shopping list grew, including new fuel and water pumps, fuel lines and flexible brake hoses, starter motor, alternator and voltage regulator and the front brake calipers were rebuilt. 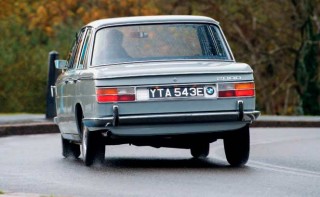 Terry felt the bumpers should be left for originality but Lee won out, having them rechromed as he felt they let the car down against the new paint. Credit also goes to BMW Classic at BMW Park Lane which was able to supply everything they needed with as much enthusiasm for a radiator hose or brake shoe as it would a rare body panel for a million pound rebuild. It even sourced a roll of vinyl for the seats. It’s not been needed yet, but it’s there just in case. Curiously the front seats had been swapped left to right in the past so that was corrected and with his specialist Porsche knowledge Terry noticed BMW had used a wider version of the Recaro seats found in Lee’s Porsche 356. Terry enjoyed using the BMW, saying it gave huge confidence on the motorway, and fun on the B roads feeling modern and safe in all conditions.

Finally the car was Waxoyled so it would last on England’s salty roads and rear seat belts fitted before being thrown into the melee of London streets. Of course being an old car naturally things didn’t go smoothly and on one of the first family outings in the BMW, having parked on the lowest and least breakdown truck accessible level of the Barbican underground car park the brake servo failed. The AA tried to repair it but it ended up being towed back to Terry again. 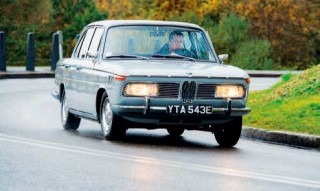 Since then it has lived and worked for its living out on the London streets for two winters with no ill effects but this year will be coming off road and going into storage for the worst of the season, until the roads are free of salt. Until then Lee will be needing a sensible modern car. Maybe an E21?