Anyway, digging about in his cabinets, he pulled out an intriguing dog-eared folder. It looked important, with the Pininfarina crest stencilled on the front followed by the words ‘BMC aerodynamic saloon’. I knew what it was at once, and – given BMC’s indifference to a car that could have changed its fortunes if it’d had the balls to produce it – was not surprised that Harris found the file in a Longbridge skip. That’s pretty much where the prototype itself ended up. I speak, of course, of the BMC 1800 Aerodynamica, first shown at Turin almost 50 years ago but best known to any child of the 1970s by the gold Matchbox edition. Weird that the toy maker recognised the importance of this groundbreaking two-box shape but BMC/BL didn’t. 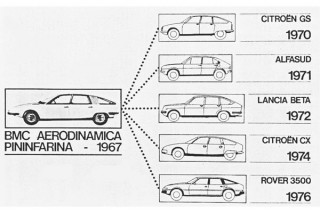 Inside the folder is a letter addressed to Roy Haynes at Cowley and signed by Leonardo Fioravanti (in the absence of Mr Pininfarina). The following pages go on to describe the car, which started life as an 1800 De Luxe, delivered to Pininfarina on 10 August 1967. Drawings and wooden master models had been worked up over the previous couple of months.

It was almost a fully functional car, built in about nine weeks using any handy bits and pieces. It had an adjustable power-seat mechanism and electric windows courtesy of Rolls-Royce, as well as Ferrari doorhandles, steering column and stalks. The document even gives details on how to make the lights work via the exotic switchgear.

The handsome interior was designed to meet the latest US safety regulations, although the radically shortened gearlever apparently made the change a bit grim. With all of its leaded panels and handmade fittings, the Aerodynamica weighed in at 3000lb, but PF felt that it could be at least 300lb lighter if fully productionised.

It remained mechanically standard, although the rocker cover had to be modified to get the transverse B-series lump under the graceful tapering nose. There was no heater, functioning wipers nor a place for the spare (the tail having been chopped), but the notes point out that there is enough space in the snout to house the spare if necessary.

The car was not a hatchback, but Pininfarina was confident that it could arrange a Renault 16-style folding seat if required. That seems like the obvious thing to do, yet both the copycat Citroën CX (of 1974) and Fioravanti’s somewhat similar Gamma saloon (’1976) avoided going ‘hatch’. Looking closely at the tail of the Aerodynamica, you can see the ribbed, dirt-avoiding rear light clusters so loudly touted by Mercedes on the W116 S-class five years later.

Further into the file, there are three sets of colour photos showing the Aerodynamica – with wool tufts attached – at 100, 150 and 170kph on a 124-mile test drive on the Turin-Ivrea autostrada. They found that it would top 106mph, compared to the 93.8mph achieved by a standard brick-shaped 1800 belonging to Sergio Pininfarina (somehow, I can’t see him smoking around Turin in a Landcrab).

Surprisingly, the frameless doors didn’t have any wind-noise problems and, with the more slippery bodywork, the car needed a higher top gear.

Like the normal 1800, it was stable in a straight line, but understeered a bit more. To take the extra weight, the Hydrolastic pressures were pumped up. I couldn’t find a note of the claimed drag co-efficient, but, to further reduce it, PF suggested fitting wider front tyres to get the wheels flush with the body, plus more tumblehome between the rear sail panels and the rear screen – thus making the car narrower in plan.

On its arrival at Longbridge, the Aerodynamica immediately became embroiled in Leyland politics. Pininfarina was out of favour because Harry Webster always preferred Michelotti and Haynes was reported to be ‘not very keen’.

Issigonis was quite positive about it, but that didn’t count for much because he was already seen as yesterday’s man in the new BL regime. Thus, the ‘Yellow Peril’ was doomed, yet its destruction in the late ’70s seems harsh. Perhaps it was just an uncomfortable reminder of how the grey men of BL had cocked up once again, but its ADO16-based sibling was given a reprieve and survives at Gaydon. Today, both Fioravanti and Paulo Martin claim authorship of the Aerodynamica, which says it all really. 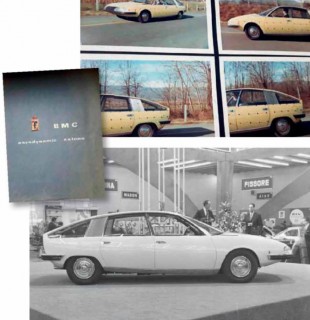 Clockwise: folder details the entire Aerodynamica project; tests showed that it was significantly faster than an ordinary 1800; Turin show debut in ’1967.

‘Its scrapping seems harsh. Perhaps it was a reminder of how the grey men of BL had cocked up once again’